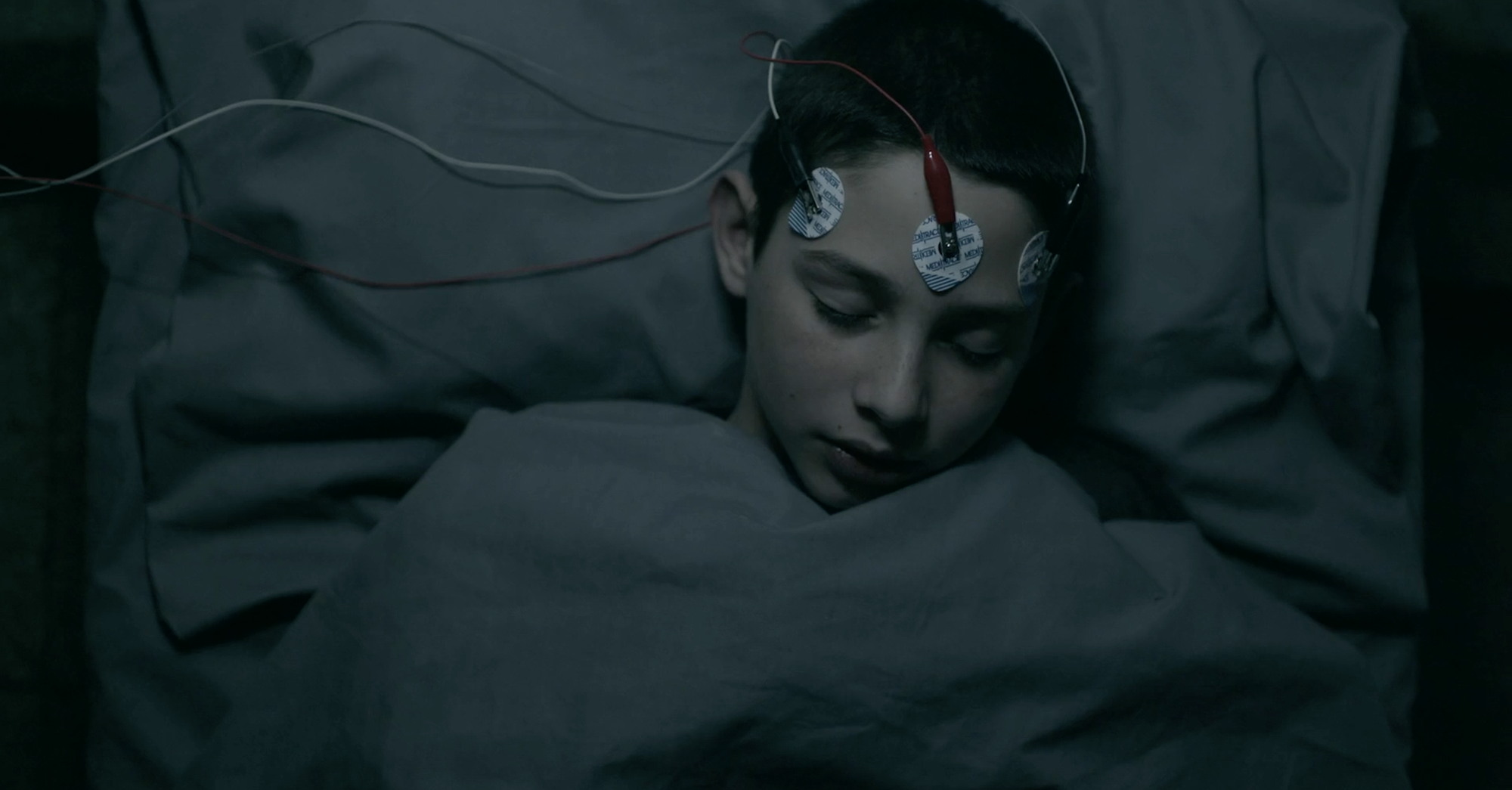 One of my longtime secret life goals has been to figure out a way to get paid to sleep. Just imagine how great it’d be to bed down, travel the fanciful worlds of the mind and memory, and arise each day with a slightly improved bank balance. While that’s a fantasy I could definitely get behind, the reality would in all honesty be much more likely to resemble the monotonous, indentured servitude presented in Marc Grey’s dream harvesting short Dreamco (Yekitza). Despite replacing my happy fantasies of sleep for pay with a Stockholm syndrome nightmare, we invited Marc to share his first experience of directing someone else’s script and to explain the perfect use for all that random footage we’ve all collected through the years.

In Hebrew the word Yekitza means something like ‘awakening’. Nadav Ruziewicz, the screenwriter, submitted the script to an open call for short films that related to the biblical concept of shmita (the sabbatical year when the land is supposed to lie fallow). In the end I think 6 shorts were made. The others related to the agricultural requirements of the sabbatical year, but Nadav dealt with the issue of setting slaves free, and the well-worn but more relevant than ever question of slave mentality – a slavery of the mind that makes choosing freedom impossible. This led him to this cool idea of a dream factory where their labor would be dreaming.

So Nadav and producer Barak Kessler got the funding and Nadav asked me to direct, which was cool because it was the first time I’d directed someone else’s script, and this script was very loose and weird which made it a challenge to realize. For example, the script called for more of a big old fashioned factory floor where hundreds of dreamers laying in long rows of dormitory beds, but we had nowhere near enough money for that and anyhow, I didn’t see why a company that mined people’s dreams would need a factory floor? At that point, I did some research into the video capture of people’s dreams and saw this amazing study from Berkley where it was basically happening, and that in turn inspired me to think about it more realistically, placing the concept in the story of some morally questionable company on the outskirts of town who got their hands on this technology and hired people from the margins of society to live and dream there so they could mine and sell those dreams. Both Nadav and I understood that in our story it would make sense that people on the outside world were no longer able to dream, and would need to buy them. It became clear that such a company would be based in some ugly office building with the offices repurposed as sleeping quarters, and of course, it was much easier to create the illusion of more dreamers this way. In fact, we only had about a dozen extras and they were only needed for the meal scene, for the sleeping scenes we had something like four.

We shot DREAMCO in two days and I’m pretty sure we used every single shot in the edit. It was funny when we were screening the rough cut for the film fund people, they were suggesting we add shots here or there and we had to explain to them over and over that they were seeing the entirety of the footage other than outtakes – that there were no extra shots just sitting in bins in the Premiere project. They didn’t really get it.

I’m pretty sure we used every single shot in the edit.

The Berkley study was also the inspiration for the visual effects we used in the dreams you see play out on the dreamers’ monitors. I once again worked with VFX artist Adam Alboher who also did the phosphenes in Night Before the Morning Sun, my last short film – so we’re developing a little repertoire of dream language which is fun to play around with. Making the dreams was probably the most fun part of the movie because it made us think about what you hear during dreams, and how those sounds would be extrapolated by these machines. Also, we used a lot of my home movies, little recordings I’ve done with my phones and stuff over the past 10 years – so it was gratifying to finally find a use for all those files. We also ended up coloring the film on my laptop, using Premiere and After Effects, which is a kind of a ridiculous way to work – the renders took hours! – but I think it came out pretty nice and people keep complimenting the colors so I guess it’s good to know you don’t NEED to go into an expensive online if you can’t afford it. Obviously, it helps when your DoP and art department are working together to give you a great and unified palette in the first place, which was the case here.

I’m just finishing a pilot for an American documentary television program that I directed called Silicon Cities, and that’s led to another different documentary show which should start sometime later this year. In the meantime, I’m writing a feature script and trying to find money for two short scripts that I’ve written and want to make. I love making shorts but they’re an expensive hobby.