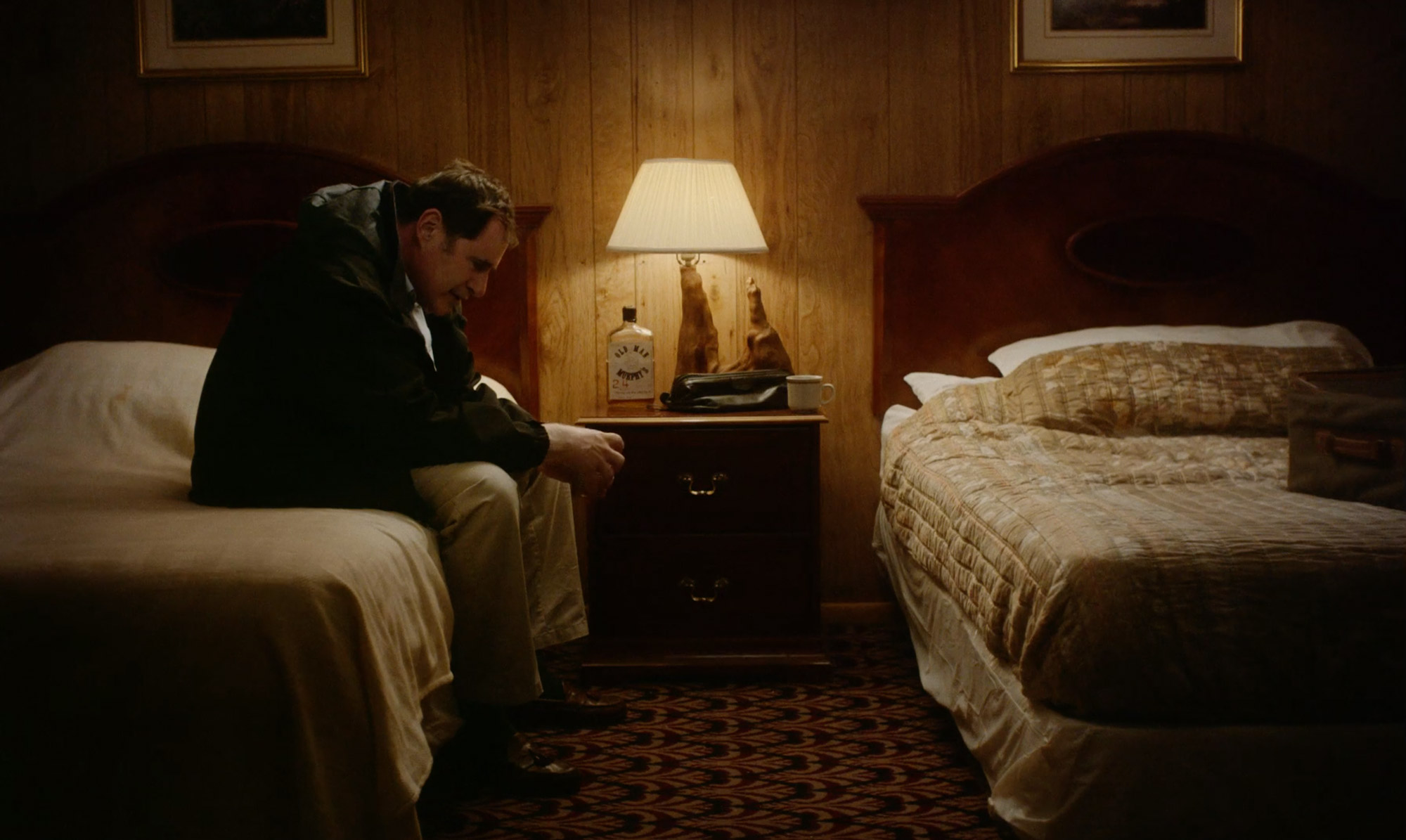 Nothing says loneliness and despair quite like a cheap motel room does it? The stories we find unfolding within these homes for transient strangers rarely speak of fresh new beginnings. Rather they concern themselves with endings – closing the page on those desperate souls who check in in order to check out for good. A dour introduction indeed, but one which is very much in keeping with the tone of Jake Honig and David Rysdahl’s gut punching short Black Swell – a film whose tagline reads: A man tries to kill himself in a motel room. DN spoke to Jake about building rich narratives through nuanced dialogue and the practicalities of capturing isolation in a small space.

One of Black Swell’s strengths is how it uses so little to ultimately leave the viewer rocking with that powerful ending. Was that narrative economy present in David Rysdahl’s script and what did the two of you do to further refine the narrative?

David Rysdahl (writer/producer/co-star) and I worked together on a few different projects that I produced and he acted in, then he approached me with this script based on a guy he knew from his hometown in Minnesota. It was such a simple story that I thought could be told in a fun and interesting way. What I found so appealing about this was that I didn’t have to know everything about who these people were and how they arrived at this motel in order for the brief moment between them to be impactful, which is a testament to David’s writing.

In the original draft both characters were the same age, but when David and I and another actor were working through it in rehearsals something felt off. Their dynamic wasn’t quite clicking so we decided to create an age gap with one character being a generation older than the other. Then we developed the teacher/student relationship which was awesome because it’s so simple yet adds a ton of unspoken history without the need for exposition. Teachers are adults we can safely confide in and their job is to look out for us in addition to teaching. But they have many more students than students have teachers, so you couldn’t blame a guy for not remembering every single kid who passed through his classroom, and for not wanting to be bothered by someone he hardly remembers years later.

Because we trusted him and his experience so implicitly we were willing to set aside our original plan (and our egos).

Richard Kind is a well recognised and respected actor in his field, how did he come to join the project and what did his experience bring to the film?

We both love Richard so much and talked about how awesome it would be to have him in the movie, but just as a pipe dream. After we put out some casting calls and no one too interesting came forward we decided to just go for it and cold called his manager. She asked us to send over the script and a week later told us he was interested. Then we met him for lunch at a diner where he interrogated us and apparently we passed the test.

His experience as a veteran stage and film actor really helped ground the film. Initially we approached it with a stronger comedic element which was why Richard came to mind, but his reading of the script was a lot more somber and very honest. It caught us by surprise but because we trusted him and his experience so implicitly we were willing to set aside our original plan (and our egos) because we recognized something stronger had presented itself. 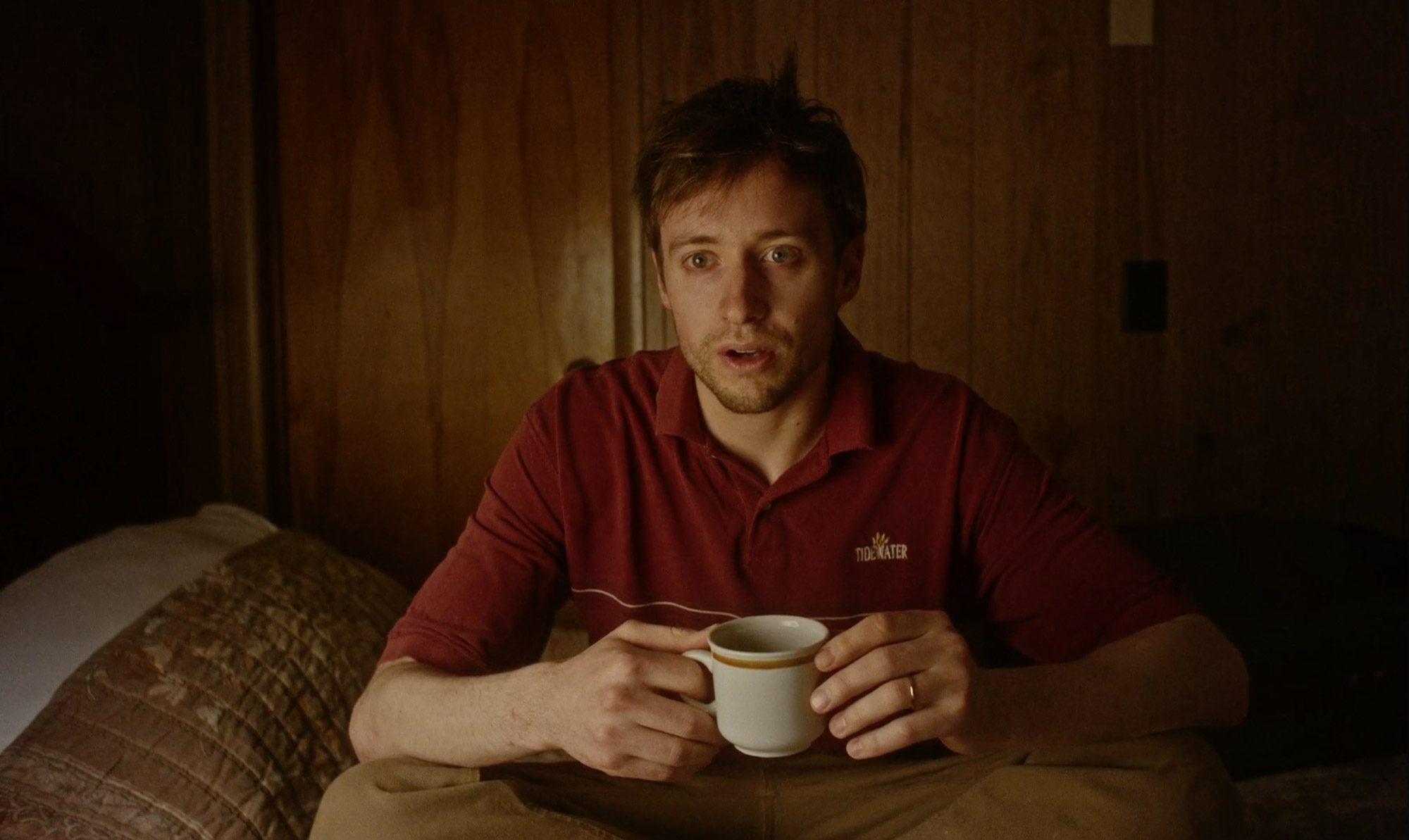 The desolate location immediately sets the mood of the film, how did you find the motel?

Finding the perfect motel was also a really important journey. We’re based out of Brooklyn, so when we started looking for a secluded location we drew a circle two hours outside the city in every direction. If you’re looking for wide open space you can either go north or east. We found an amazing old motel upstate, but the woman who ran it was elderly and spoke little English and couldn’t quite wrap her hear around what we were asking, so we ended up with an even better option out in Montauk. Shooting all the way at the tip of Long Island in the offseason immediately changed the atmosphere of the film. The eeriness and loneliness of a deserted beach town became the perfect backdrop for the story.

As is their nature, motel rooms aren’t the roomiest of places – in what ways did that space restriction inform your filming approach and design choices?

Legendary movies like 12 Angry Men and Who’s Afraid of Virginia Woolf exist in very small spaces yet sacrifice nothing in terms of visual language, so we really didn’t have an excuse to be sloppy. The motel room was definitely small but because the emotional distance between these two men is so great we wanted to make sure the camera emphasized that. They are never in each other’s shot until the end, but even then they exist on opposite sides of the frame. We wanted to make sure they never felt connected even though they were physically very close.

An important aspect to the film’s design was how angular the room was but that was more a result of us finding the perfect motel. There are lines everywhere — window shades, wood paneling, picture frames on the wall, etc. We wanted the room to feel impersonal and a little spooky, and exacerbate the harshness of those lines with single practical light that cast shadows across the entire room. Shooting in a motel room can often look generic but we knew this film wouldn’t work unless we created a unique and atmospheric setting.

The sound design is very clean and those waves the perfect accompaniment to the dark subject matter. Could you share your approach to building that?

Most of this is due to the craftsmanship of an incredible filmmaker and sound designer named Bobb Barito who I know from school. The setting of the film is so important to the story, a lonely off-season beachside motel, and the first shots of the film establish the atmosphere as cold, harsh, and empty. When we took the audience inside the motel we didn’t want them to lose sight of where they were, so every time a door is opened you can hear those violent waves and whipping wind. But seriously, Bobb is great!

We wanted to make sure they never felt connected even though they were physically very close.

But even inside the room you don’t get much solace. It’s so quiet in the beginning when Mr. Fennimore takes out the gun that you can hear every click of metal as the bullet slides into the chamber, and when the music from next door comes blaring on it’s all the more piercing. All the sounds are diegetic so the audience can focus on what it’s actually like to be in this place.

Equally restrained but with a tactile feel that’s largely missing from digital images is Sarah Lammer’s poster for the film. Were you familiar with her handmade work before? How did the two of you arrive at that design?

Sarah Lammer is a great friend and terrific artist, and in addition to designing the poster she actually cooked for all of us on set. I think from watching the film you can tell we are a bit nostalgic for analog aesthetics, and if we had the money we would have shot this on 16mm. When it came to the poster we wanted something that enhanced the eeriness and loneliness of the location. We sent each other tons of photos of swells in the middle of the ocean that were turbulent and deadly which were the basis for the texture, then Sarah painted everything onto paper that she cut and arranged into a three dimensional image. Much of her work uses the texture of the canvas as much as the design itself and I think it makes for a very striking poster. Her other work is so good and you should check it out. 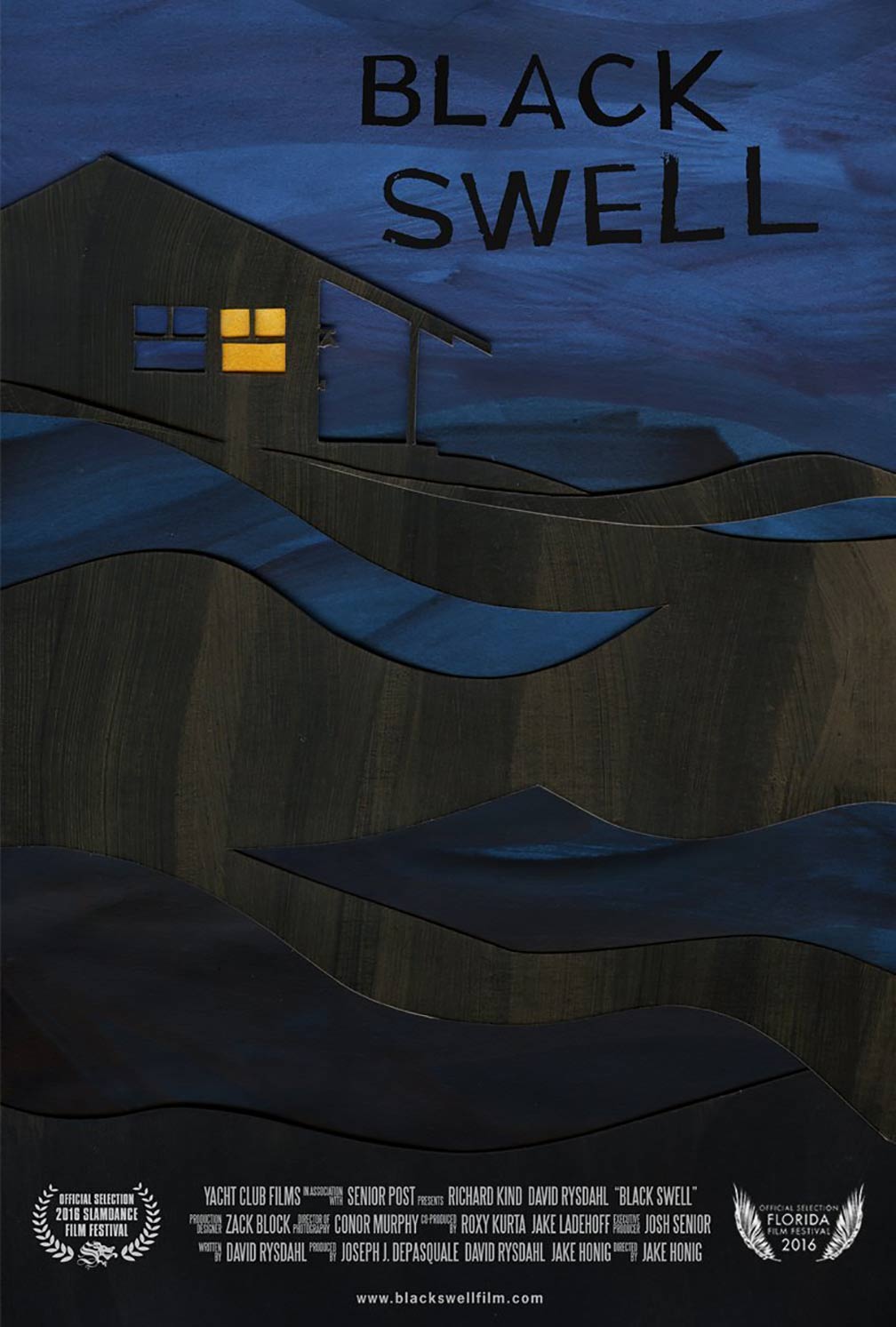 What will we see from you next

I’m working on a short comedy about the post office that’s shooting in November, and David Rysdahl has a few projects coming out that he acted in (including the feature film Revival, slated to premier in 2017) plus he’s busy writing a feature set in rural Minnesota that he’s planning to shoot next summer.