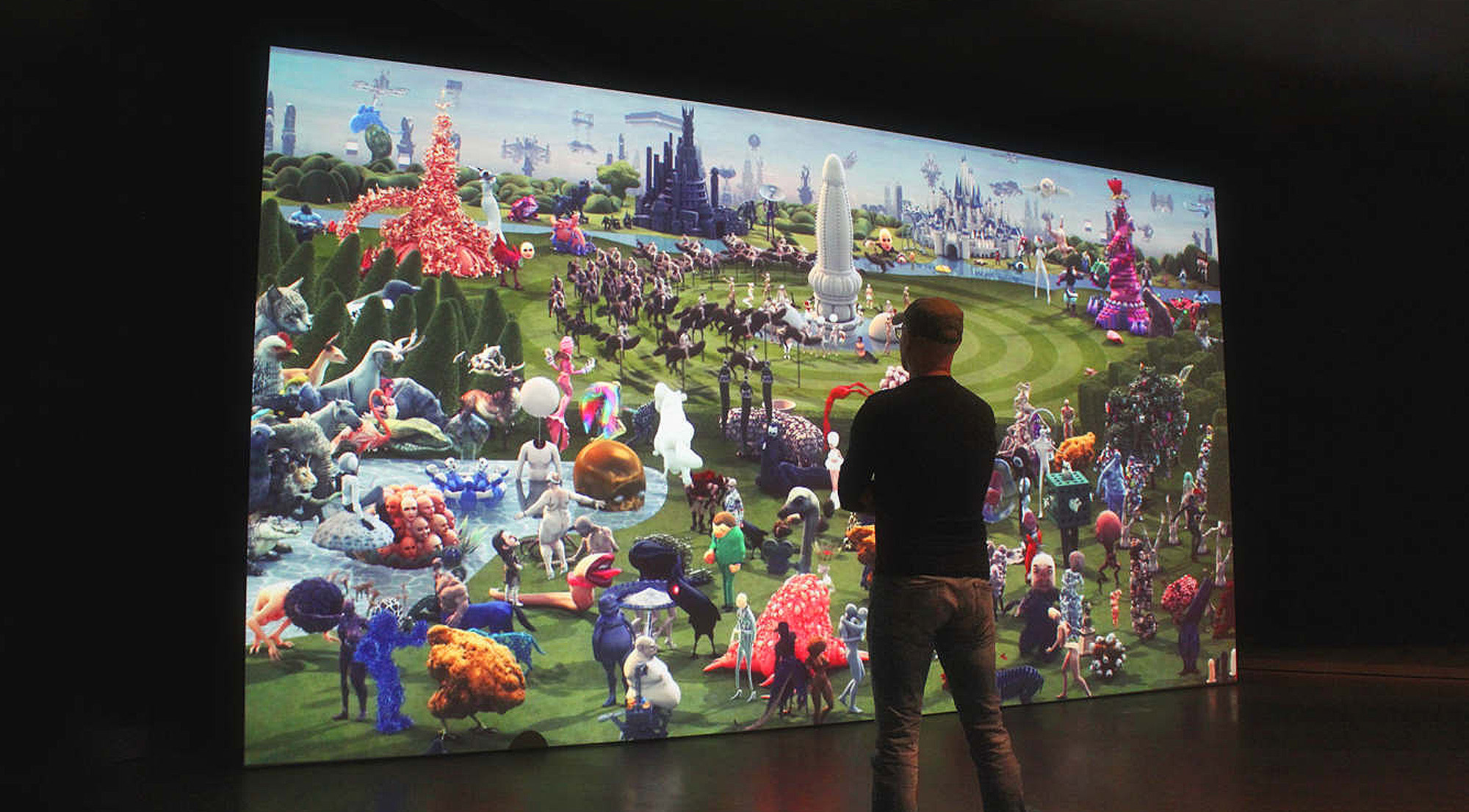 A multi-award winning Dutch film studio made up of three exceptional individuals – Ton Meijdam, Thom Snels and Béla Zsigmond – Studio Smack’s collaborative efforts have consistently created interesting and innovative work. Their latest piece, commissioned by the MOTI museum, brings to life one of  Hieronymus Bosch’s last surviving and most famous paintings, The Garden of Earthly Delights. Studio Smack inculcated the work of the early Netherlandish master with the lifeblood of modern visual culture – the video has been described as bringing a new layer of meaning to the historic artwork. I jumped at the opportunity to interview the creators behind this unique transformative piece and I’m sure you’re going to love reading about their re-imagining of Bosch’s triptych masterpiece for the screen.

What inspired you to make an animated interpretation of The Garden of Earthly Delights?

Paradise was commissioned by the MOTI Museum in The Netherlands for the exhibition New Delights, which is part of the Hieronymus Bosch 500-year anniversary. A gigantic video installation of this work is exhibited in the Museum until the 31st of December 2016. For this exhibition, we were asked to reconstruct the middle panel of Bosch’s painting into a modern provocative version. Paradise explores the religious themes of corruption, temptation and debauchery of the Fallen World in Bosch’s painting – in a seething mass of chaotic severity. The creatures that populate the indoor playground embody the excesses of the 21st-century Western civilisation – from a horny Hello Kitty to a coke hunting penis-snake. From an incarnate spybot into headless fried chickens. Consumerism, selfishness, escapism, the lure of eroticism, vanity and decadence. All characters are metaphors for our society where loners swarm their digital dream world.

How did your collaboration with the MOTI Museum come about?

We have been collaborating with the MOTI museum since 2005. This is actually the third work we’ve made with them (Kapitaal (2005) and Branded Dreams (2015)). The museum director and curator, Mieke Gerritzen, has been a fan of our work since we started making films. She has always been very supportive and helped us create a few of our best works. So when the museum decided to set up the Bosch exhibition and needed a couple of maniacs to animate The Garden of Earthly Delights they called Studio Smack.

That’s right. Each character has their own animation loop. Even the video itself is an infinite loop. The characters are a symbolic reflection of how egos are put together, an imagination of people as they see themselves. A garden filled with superegos being so self-absorbed that they’re unaware of being stuck in an infinite loop.

There is very little known about Hieronymus Bosch and the meaning of his art? How do you interpret his art and what does it mean to you?

Art historians have interpreted the complete painting as a didactic warning on the perils of life’s temptations, but twentieth-century musings debate whether the panel is a panorama of a paradise lost. We believe it to be the latter. The triptych reads as a comic, showing the creation of earth and man, the corruption of man and paradise and finally the day of judgement. Like The Garden of Earthly Delights, we believe Bosch paintings often have a certain amount of social critique. 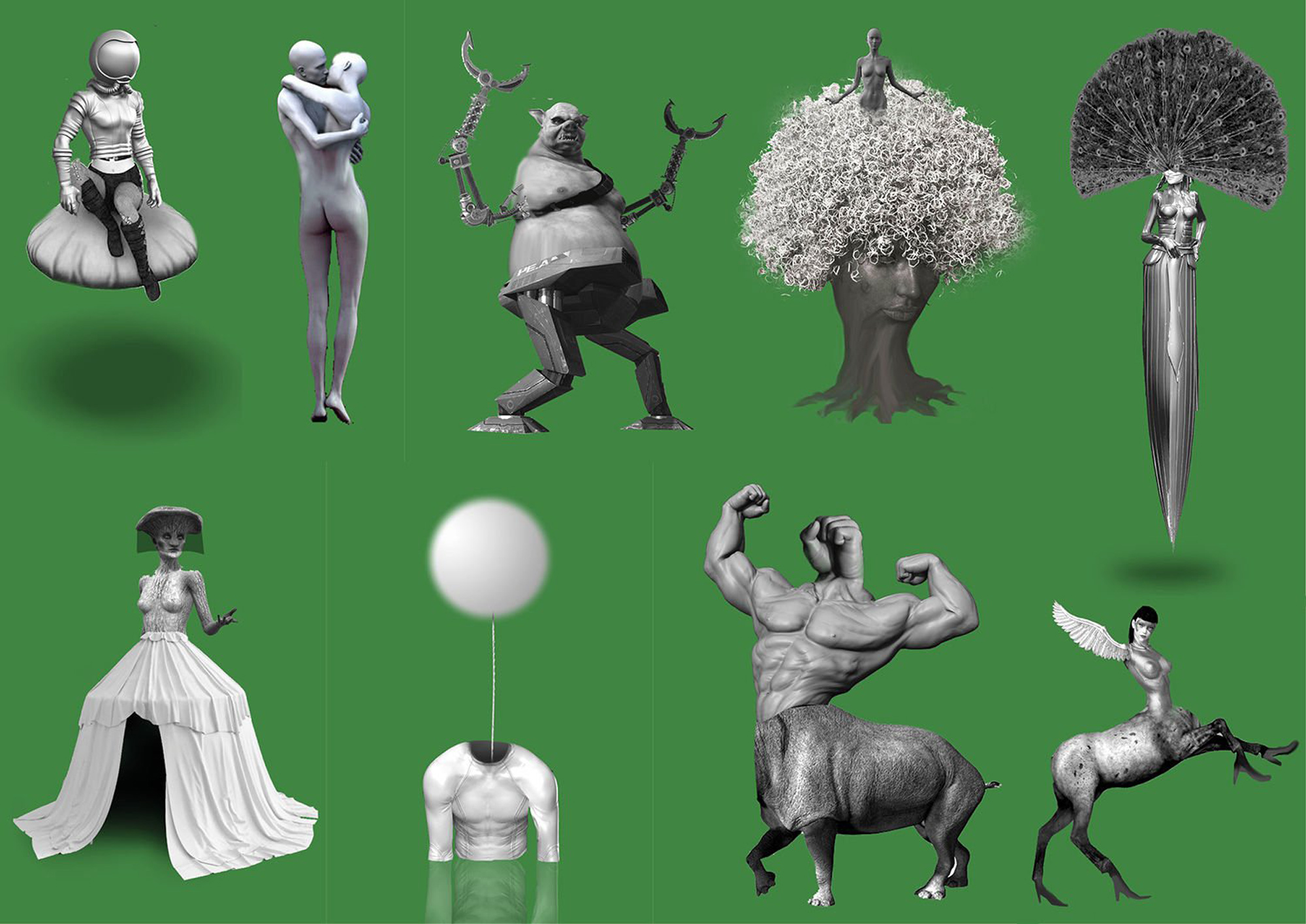 How much did you plan things out during preproduction?

We normally don’t know what the end result is going to be when we start a project. We just start by doing a lot of research, sketching, brainstorming (= drinking, walking through the room like headless chickens and shouting out ideas), experimenting and repeating that process a couple of times until there is a strong concept and a basic visual idea we all like.

What software did you use and how long did the piece take to make?

We used a combination of different software. For modelling the characters, we used Daz3D and Cinema 4D. For rigging, we used Mixamo, an online auto-rigging service (real life saver). Then each character was rendered in Cinema 4D and later composited in After Effects. We had to model, rig, animate more than 200 different characters in about 1500 renders in 3 months. And although the three of us had a really tight deadline, we still wanted to have the possibility to experiment and try out new things during the realisation of the project. The total production time of the project was about 5 months. The first two months involves a lot of research, sketching, technical experiments and presentations.

The animations are very unusual, to say the least. In Bosch’s painting the people look pretty normal, where were your unique animations born from and what were your reasons for this stylistic approach?

We wanted to create an overpopulated playground full of glitchy unstable characters, nature and architecture. Each having their own animation loop. Everything had to move in its own unique hallucinatory way. And everything had to look like a mix-up of elements of popular culture and still be a symbolic reflection of how egos are put together, an imagination of people as they see themselves – unlike Bosch’s version, where all people more or less look the same.

You consistently produce incredible work, (I have to mention the Witch Doctor music video) what do you think makes the studio so successful, what’s the dynamic between your team?

Studio Smack operates like a three-headed monster. In the first stages of a new project we work together on research, concept and design. After that, we divide the work depending on each project, with Ton focusing more on technical development and animation, Thom on animation, edit and audio design and Béla on overall design, art direction and project management. In our work, we want to create powerful images that are clear in an instant, and often have something metaphoric or iconic. We try not to let our egos get in the way, so the quality of the work always comes first. We normally don’t stop until we’re absolutely satisfied with the result. With Witch Doctor that got up to a point, everyone thought we’d gone insane. It took us about nine months to get the look we wanted. Luckily all that work was worth the effort. It has brought us a lot in return.

There’s often a certain amount of social critique in our work, but we’re not aiming to be moralistic or tell people what to think.

How do you pick the projects you want to take on?

It all depends, some projects we initiate ourselves, like Witch Doctor, and for other projects we get invited, like Paradise. It sounds a bit management-marketing-strategy like but with every project we ask ourselves: what do we get out of this? Ideally, it would be Fun, Money and Fame. But one out of three would also be OK 😉

Studio Smack produces work “that in the first analysis has an autonomous value, but often also responds to developments in society; the so-called Design for Debate”, can you tell us a bit more about this?

That’s a sentence I would never use in a real conversation, haha! But basically, it means we make free work that not only looks good but also makes people think. There’s often a certain amount of social critique in our work, but we’re not aiming to be moralistic or tell people what to think. For example, with Branded Dreams, which is obviously a dream about Coca-Cola, you see how a dream could look like when invaded by Coke advertisers. We’re not saying Coca-Cola is an evil company. In this case, the well-known brand serves as an example. We want people to think about the presented idea. What if advertisers could invade our dreams. The last add-free zone. Do we want this to happen? Because this might be the next step in advertising.

What’s next, we can’t wait to see?

We recently joined Partizan, a worldwide operating production company (also for Michel Gondry!). They’re working to get us some well paid commercial jobs and music videos. So that’s pretty exciting. Next to that we’re planning to create a game.