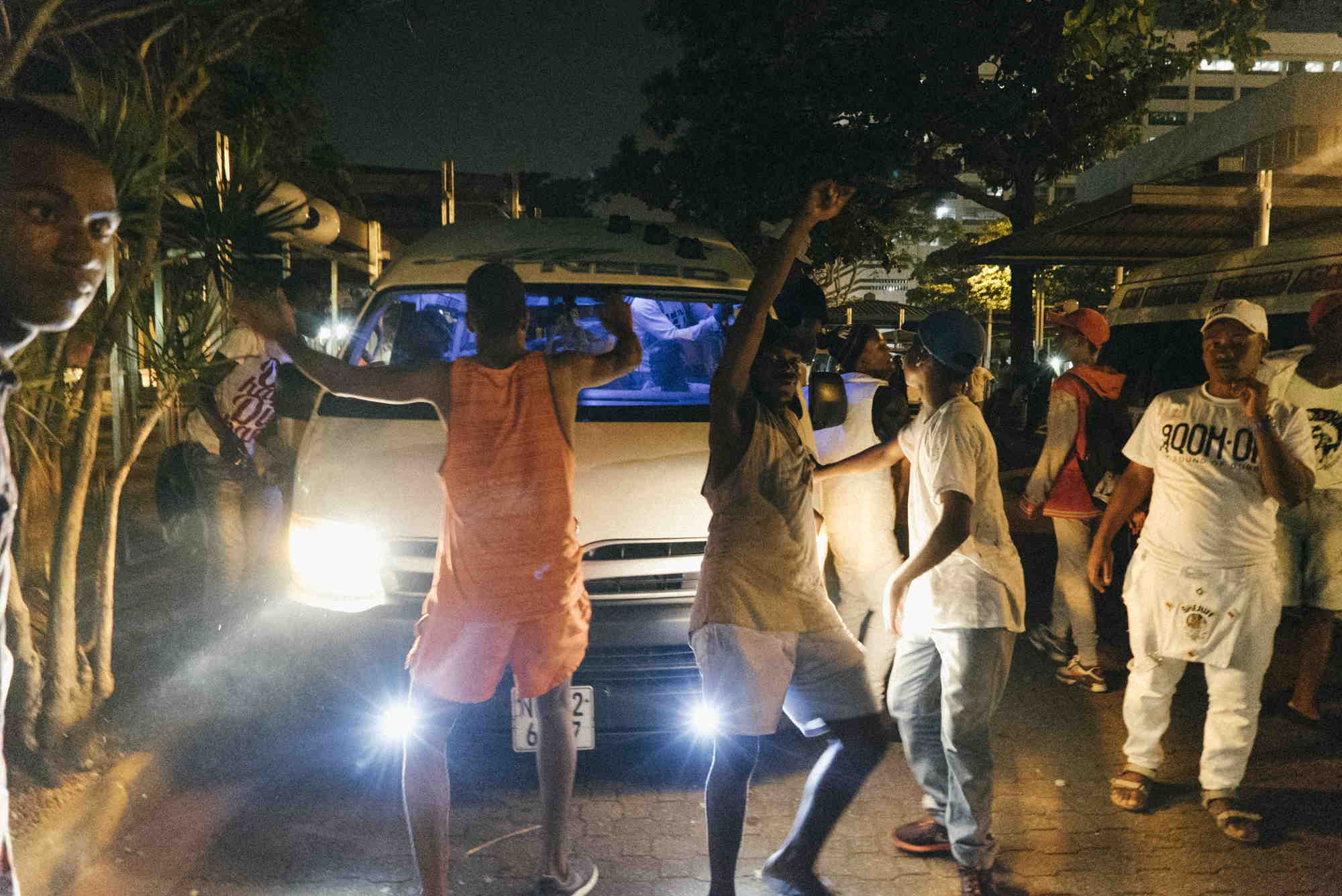 As someone who’s spent more weekends than I care to remember rooting through record bins in the hunt for elusive pieces of vinyl, the fact that we can now stream tracks seconds after hearing about an artist still astounds me. However, with convenience comes a disconnect, as music makes its way online to be consumed largely divorced from the places, situations, and players who were critical to the formation of its sound. In an attempt to address this musical detachment from orgin, comes documentary Woza Taxi from filmmaker Tommaso Cassinis, who headed to Durban, South Africa to seek out the faces behind the Gqom dance sound which has been making its way through the international club scene. In our interview, DN discovers how Tommaso prepared for a documentary shoot where the locations and situations remained unknown until moments before he captured them on camera.

How did you become involved in this exploration of the roots of the Gqom scene? Was there a specific agenda behind the film?

The Woza Taxi documentary is a collaboration between the Italian curation collective Crudo Volta and the record label Gqom Oh! It was realised to give a human dimension to the artists of the label, which is made difficult by the obvious geographical distances but also by the limits of a medium like the internet, which reduces drastically the signifier of a determining factor like the ‘music scene’.

The mini documentary as well as giving a quick peek at the relationship between an Italian artist and artists of an African scene, tries to contextualise the authenticity of the sound while capturing the energy surrounding Durban and its vivid townships. In a very entropic scene like the South African house music scene, we have tried to understand how a teenager from Durban could cope in the demanding role of producer and taste-maker. This objective was developed through the narration of the enthusiasm, the fervour, the dedication, the strong sense of identity but also the contradictions, the limits, the technical-divide and many other factors that influence and determine the creative process.

Since the Taxi is a curatorial format that observes and investigates music scenes through the device of a Taxi ride, we believed that nothing was more appropriate than focusing a good part of our documentary on the well-known Minibus Taxi. Among the many aspects determining the authenticity of Gqom music, the use of Minibus Taxis as a tool of DIY promotion is certainly a story worth telling. In a music scene strongly influenced by the possibilities offered by the internet, this unexpected detour in the physical world reaffirms a functional coexistence between technology and local culture but also highlights the creativity of less fortunate artists in lack of established structures.

Could you take us through the production journey of this multi-faceted project?

I was in Durban for ten days travelling with Michè Achode (Crudo Volta Radio) and Francesco Cucchi (Gqom Oh!) and we discovered lots on our way, thanks to Lerato, a friend who guided us during the trip. Everything started with Francesco who, in January 2016, released The Sound of Durban Vol.1 which represents the first full length compilation collecting the sound of the suburbs and townships of Durban, South Africa known as “Gqom”. The album unites many of the local young producers of this fresh genre over 15 tracks on double LP and digital.

At the same time Crudo Volta Radio was starting to explore different music scenes all over the world, focusing on DJ culture, African origin and urban music productions. We (Crudo Volta and I) worked together on Petit Taxi, a recap trailer of a trip through the wild streets of Maghreb, looking for the most authentic Soul, Jazz, Rock and Folk music. From this point the equation was easy, Francesco was going to meet and sign some DJs from a really interesting music scene and me and Michè had the opportunity to continue our format, so we decided to start this project all together.

Francesco had been in contact with DJs over the whole year via chat. As the communication was not always easy we didn’t know exactly what we were going to face. So the pre production was not so planned as we didn’t know exactly what to expect. For every day we were there we met a different DJ and we started discovering more and more what a township was, what is the taxi’s role, how do musicians interact, how do they spread their music, what is the relation between Gqom and local radio stations, and this is how our documentary started.

Knowing that you’d be going into situations blind, what requirements did you have in mind when selecting your shoot gear?

Over the years I carefully selected my equipment, finding a good compromise between lightness / versatility and completeness of the equipment. I’m also constantly looking for a unique style and therefore I have well in mind what footage I like to have in my montages and what remains absolutely useless. With the Woza Taxi project, I knew that a lot of work would have been left to improvisation. We didn’t have scheduled appointments before starting, so it would have been impossible to write the subject for a script that had to be discovered.

With the Petit Taxi project, we laid the foundations for a format that we could replicate and on which we are still working on. So we had an idea of how the project had do be done. My equipment (Sony A7s Camera, Sony 24-70 f4.0, Nikon 28mm f2.0 & 105mm f2.5 lenses, Gopro 4 Black, Contax T2, Aerea Visus 3 axis stabylizer, Zoom H1) allowed me to not be intrusive, to work in low light (being electronic music I knew I would found myself in dark situations) and have my equipment always ready, not knowing what situations I would have found myself in. I would have liked to cure more of the audio aspect, I brought with me an external recorder and microphones, but the situation did not always allow me to take time off to put together a set. Next time I will probably provide a good microphone on the camera, preferring the aspect of lightness and dynamics, without having to use a a sound engineer or complex equipment.

Interviewing was always inspiring, and every answer brought us to a new question.

Was it difficult to find your way to heart of the Gqom scene?

Our fixer, Lerato, guided us during our trip. She’s from Johannesburg and she’s the Gqom Oh! partner in South Africa, so she easily provided us with the translation from Zulu to English, and even to Italian right after every interview. The more we went through interviews, the more our content focus became gradually clear. We didn’t know much about the Gqom scene in Durban before we left, we knew that some guys were producing music using taxis to share it via USB pen drive. That was enough for us. Knowing that the genre was becoming so popular in Europe gave us all the necessary curiosity to go deeply in the argument: when was the genre was born, what other genres Gqom took inspiration from, what the guys normally listened to, why use taxis as a communication diffusion… Interviewing was always inspiring, and every answer brought us to a new question. A general idea on what the main focus our documentary would have started to be clear in our minds: the Gqom diffusion in SA, the relationship between Gqom and local radios, how drugs interacted with the music and personal aspects of the DJs. 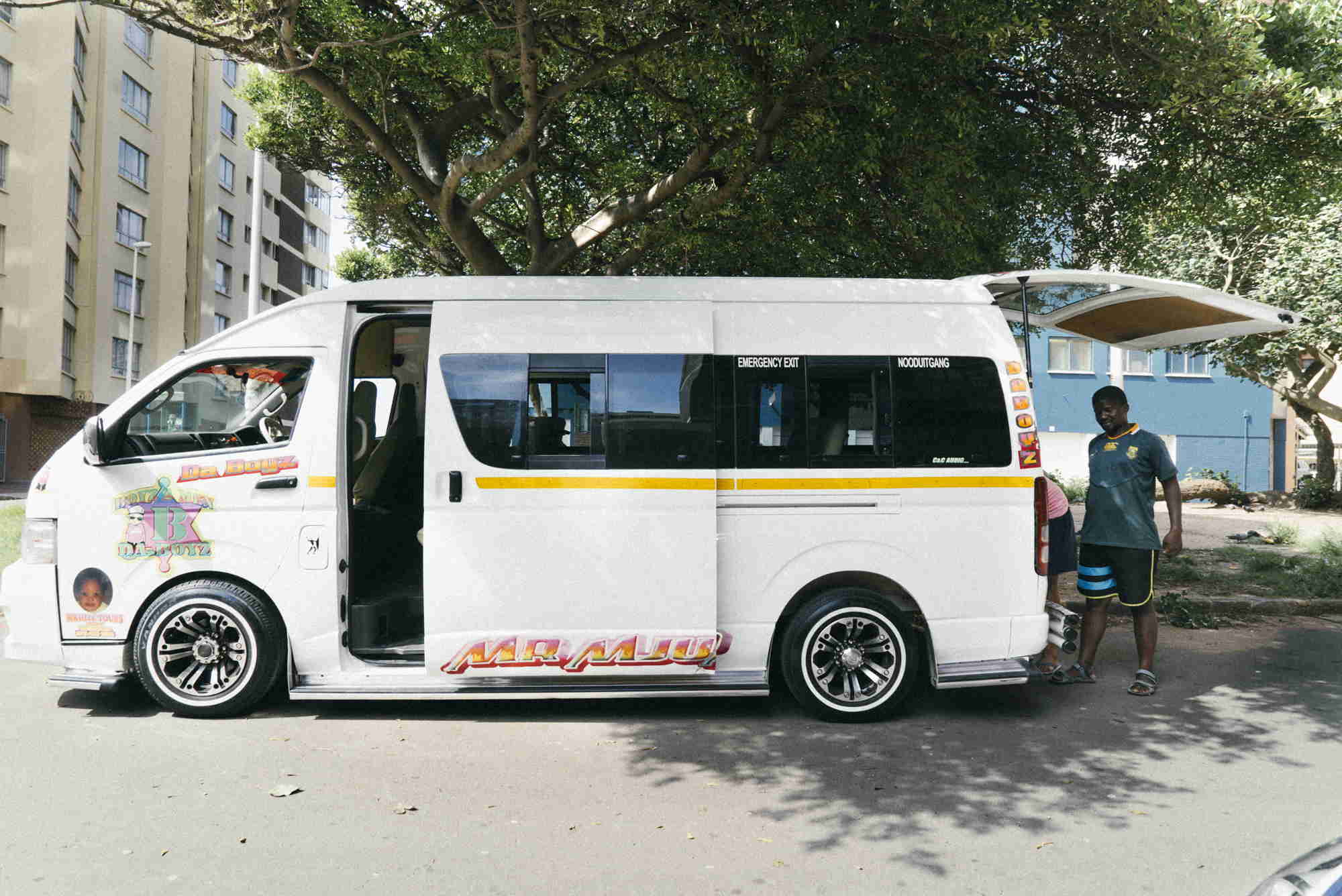 How did you go about building the narrative structure in post given the many players and perspectives that feature in the film?

The post production process took me and Michè around four months. We started by re-listening to all the interviews and identifying a common factor among them. We then decided to focus on the ones we liked the most and that truly described the essence of the music and Durban reality. We ended up with main chapters that were then followed up by the interviews of the characters. On this well organized track I then started the editing process, associating images to the specific arguments trying to maintain an aesthetic continuity, color correcting and finalizing while Michè worked on the audio mixing. At the same time, we worked on a 24 page mini tabloid which include some of the best pictures taken from the trip, a double sided 90 minute tape with one side containing 7 tracks from the documentary and the other side an exclusive 45 minute mix from Nan Kolè and a limited edition t-shirt.

Woza Taxi was released online last July, what were your hopes for the documentary? Has the film surpassed the limits of the internet you mentioned earlier?

We didn’t have big expectations after the release of the documentary, we felt it was important to promote such an interesting reality and the production of the Crudo Volta Radio collective. Miche’s vision is to maintain a certain frequency of release of the productions, that all examine similar arguments and possibly use a taxi. The documentary has been of great interest and is pointing out this incredible Durban reality that not many would have known about, and is expanding also thanks to the extraordinary work that Francesco has been doing with the Gqom label. This is probably the main thing that I’m most happy about. The online results went well beyond expectations and I’m pleased to have attracted interest in the festival circuits and projections.

Where in the world will you be heading for your next project?

Don’t know really but certainly anywhere where there is a story to tell.. Probably Paris before the end of the year.