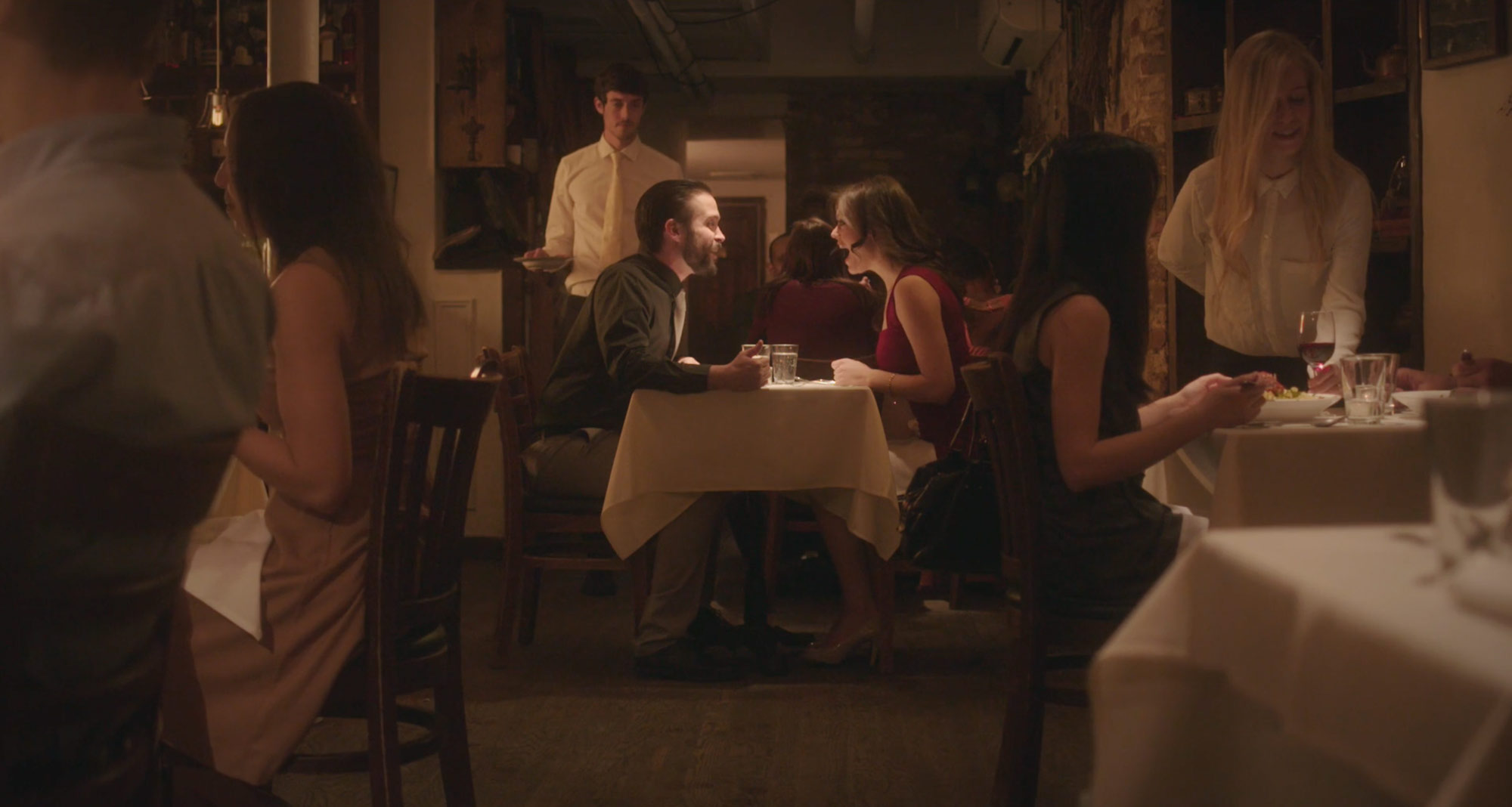 There are many potential ways to propose to your soul mate. You could surprise them against the backdrop of a beauty sunset vista. Have your declaration of love sky written in looping cursive for the whole world to see. Or there’s always the go to classic of the ring hidden in a desert at your favourite restaurant. But before you begin researching the affect of frosting on diamonds, perhaps you should first watch Daniel Sorochkin’s heartwarming marriage proposal gone wrong short Check Please, which mines the situation of a ring mistakenly sent to the wrong table for awkward comedy gold. With Check Please making its way online today following a successful festival run, DN invited Daniel to take us through the creation of his toe-curling comedy of errors.

I always liked telling stories about one’s need to stand up for oneself. That theme has come up in a few of my projects. My protagonists need to push themselves out of their comfort zones in order to get what they want and deserve. In some of my films, the protagonists succeed in standing up for themselves, in some they fail. Just like in real life, you win some you lose some. But even if one succeeds it always comes with a price. I believe these themes are very relatable. We all have been in situations that challenge us to stand up for ourselves, and there’s a price to pay for doing so. I know I personally have been there many times.

In Check Please the protagonist, Ben, has to stand up for himself and get his ring back from Mike. But he also has to understand the inevitable price he has to pay – that his marriage proposal will not be as romantic and intimate as he wished for. His dream of a perfect night is ruined whether he claims what’s his or not. 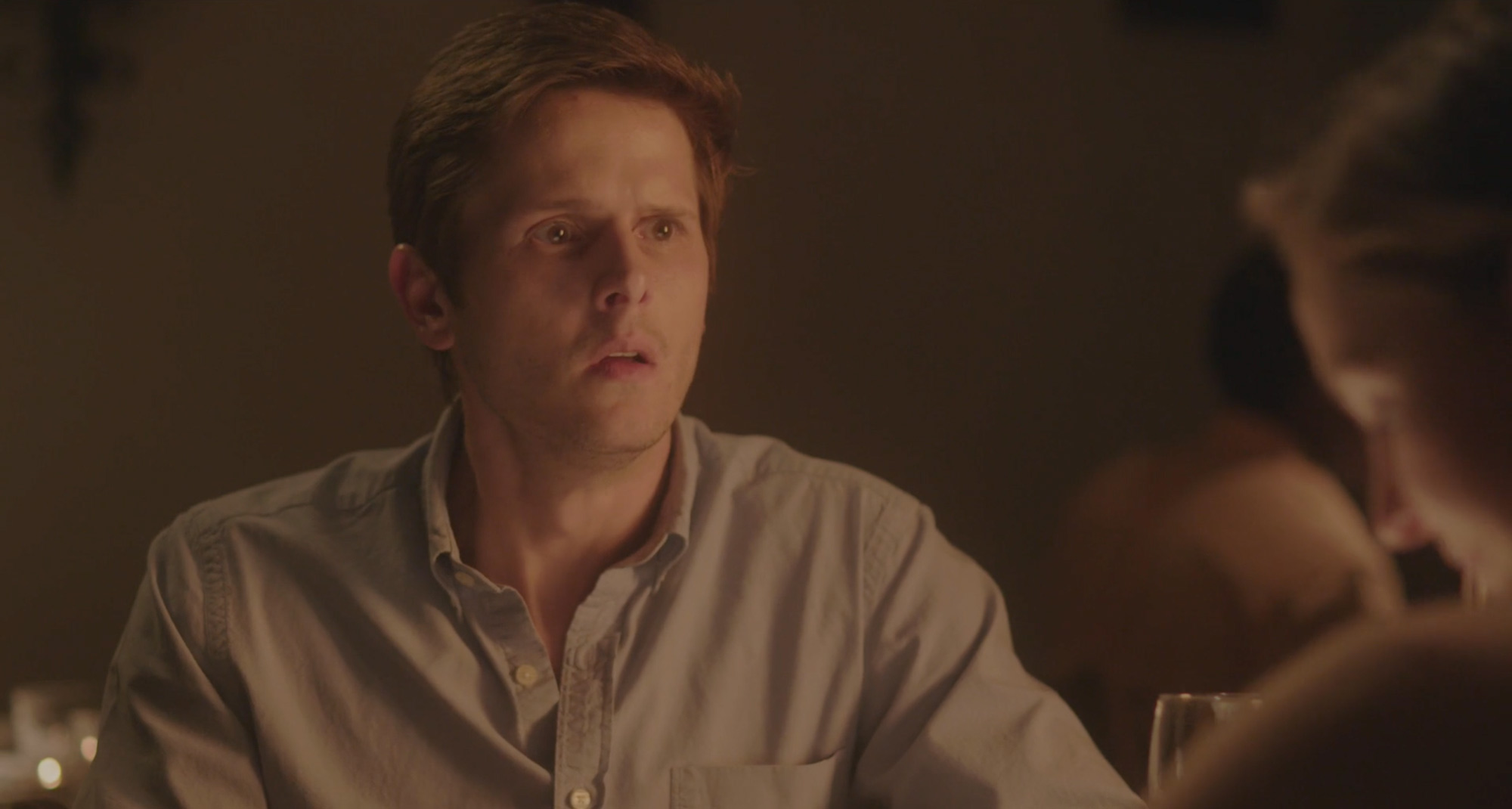 The idea of Check Please came to me as I was trying to think of a short that is contained to one location. But as soon as I wrote the script I realized the difficulties that it brings. How do you make a film that takes place in one location always engaging, entertaining, and powerful? The first thing I did was to workshop and re-write the script until the story structure was strong. I made sure the inciting incident happened early on. The protagonist’s goal and flaws are very clear and the stakes are constantly raised.

I knew that each beat of the film should feel different, new and nuanced, raising new challenges or uncertainties and keeping the tension high, otherwise the audience would easily turn away. In rehearsal with my wonderful and dedicated actors, we worked on exploring various blocking and rhythms to the acting beats. This was crucial. I made sure that dramatic moments are interwoven fluently with the comedy, and that the characters constantly change tactics while attempting to achieve their goals. This was the way I chose to keep my audience engaged, surprised, and feeling a range of emotions. I hope these decisions helped make the film captivating even if it’s all within the same location.

Just like in real life, you win some you lose some.

The casting was tricky at first, but such a fun experience. I love casting sessions. When I saw Bryan Manley Davis and Amelia Brain, in the callbacks, playing the lead couple together I knew I had to cast them. Clicking immediately, they made me feel like they were a couple for real and had been for a long time. As for the bratty Hannah character, I had no doubts. Emily Dennis dove into the role with ease. She cracked me up in the audition.

For the antagonist Mike, I had a great actor, but unfortunately, for personal reasons, he had to drop out of my film. I quickly started to look for a new Mike, watching dozens of reels online, until I saw Jacob Trussell’s reel. I invited him to audition with two others actors, but he was clearly perfect for the part. I was really lucky I ended up having him as my Mike. As for the waiter character, Stephan, it was an easy pick. I initially invited Matthew Porter to audition for the lead character, Ben. I wanted to see a range of options for Ben’s character. As soon as Matthew opened his month I knew he was brilliant, but not the right casting for Ben. I decided that I was going to skip any auditions for the Stephan character and offered it straight to Matthew.

Production was like any short film production – tight on time. It was a three days shoot, ten-hour days, in a restaurant that was open every night only for dinner. That was a big challenge, as we had to set up and break down everything each day. There were lights rigged to the ceiling over every table at the restaurant, and we set a lot of production design. It all had to be built and be taken down at the end of each day. Other than time, everything went pretty smoothly. My crew and cast were totally on top of everything.

I do remember that on the first day I took only one take of the entire close up on Laura’s character at the lead couple’s table. That take was more than five minutes of straight acting for Amelia with no pauses while changing emotions drastically from beat to beat. She was brilliant, and after that take I was confident that we got everything we needed. Later that night though I went to sleep thinking I was reckless for not taking even just one other take for safety. But we didn’t have time to come back to it, and luckily everything turned out amazing. She did an incredible job all in one take.

How do you make a film that takes place in one location always engaging, entertaining, and powerful?

Because the film was contained in one location, I knew that I couldn’t have the whole film shot only at two tables in the restaurant. It would have been tiring to the audience. That’s why some scenes take place at the bar, in the bathroom and next to the restaurant’s entrance, all motivated by the plot. This helped not only in keeping the audience engaged but also in setting up new dynamics between the characters and giving an opportunity for new shots that visually conveyed the story’s progression. But even if a few scenes happened at the same table, for example the antagonist’s table, I tried to have every scene there shot differently, motivated by the unique blocking of each scene, and framed in a way that helped convey the specific emotions and conflict for that scene. 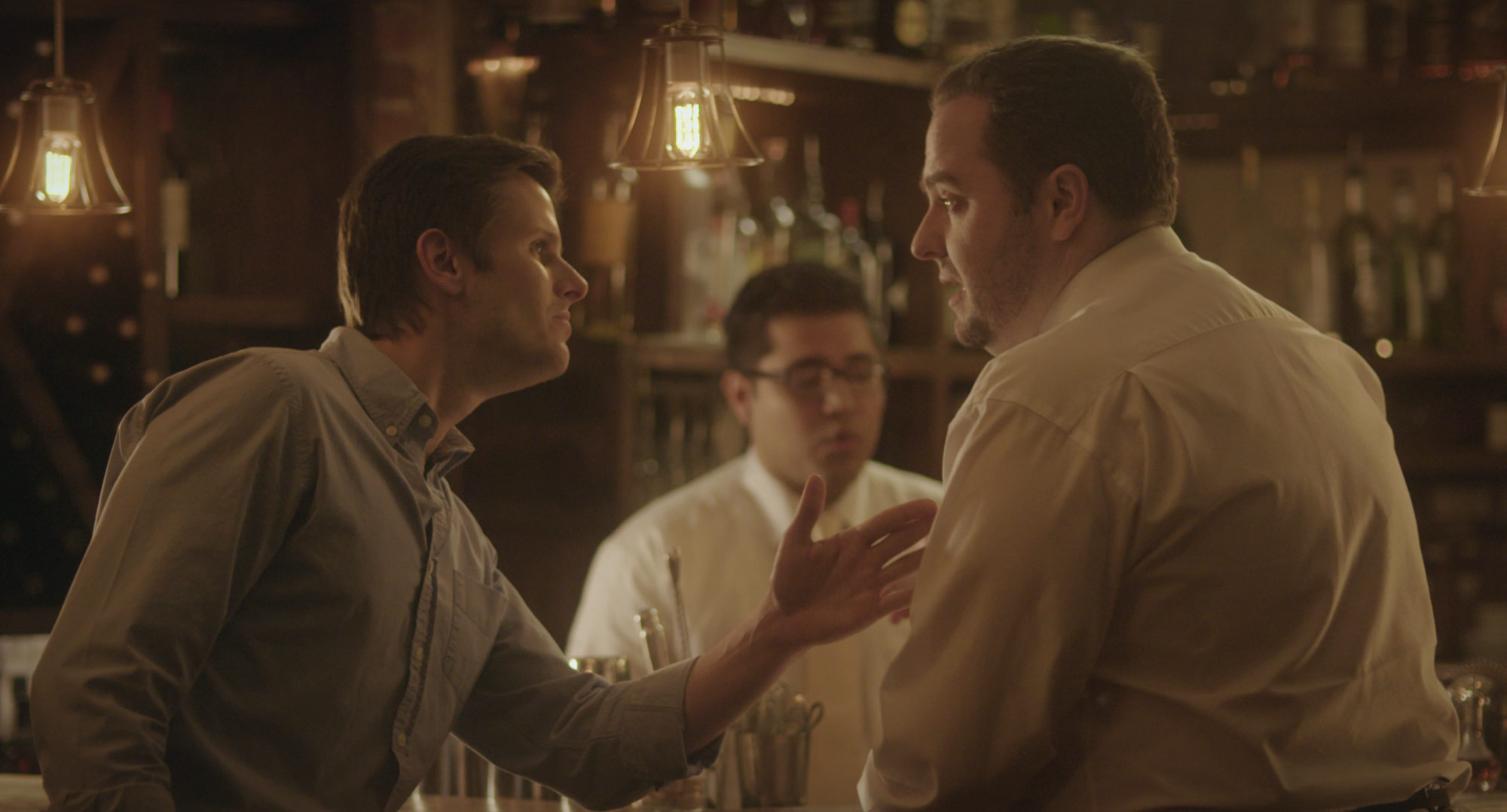 It was also important to me to use props and production design to push the story forward and keep the audience engaged. The characters use wine glasses, cutlery, their meal, desserts, napkins, chairs, champagne, phones, wallets, etc. all to make every moment new and captivating. And by the way, it’s not a coincidence that the protagonist, Ben’s meal is a chicken, like he kind of is at the beginning.

We shot on Sony F5. Although it wasn’t our first choice, we thought it would do the job, and we couldn’t afford to rent a different camera. We also rented Cooke lenses that gave the film a very soft look and pleasing falloff of light. We thought those lenses would be a great fit with our romantic warm lighting plan.

When it came to post-production, I knew I was in great hands with Yonatan Weinstein as my Editor. I love his attitude. He’s definitely not a ‘Yes Man’. We went back and forth debating every single cut, down to the frame. He made a huge impact on the film. 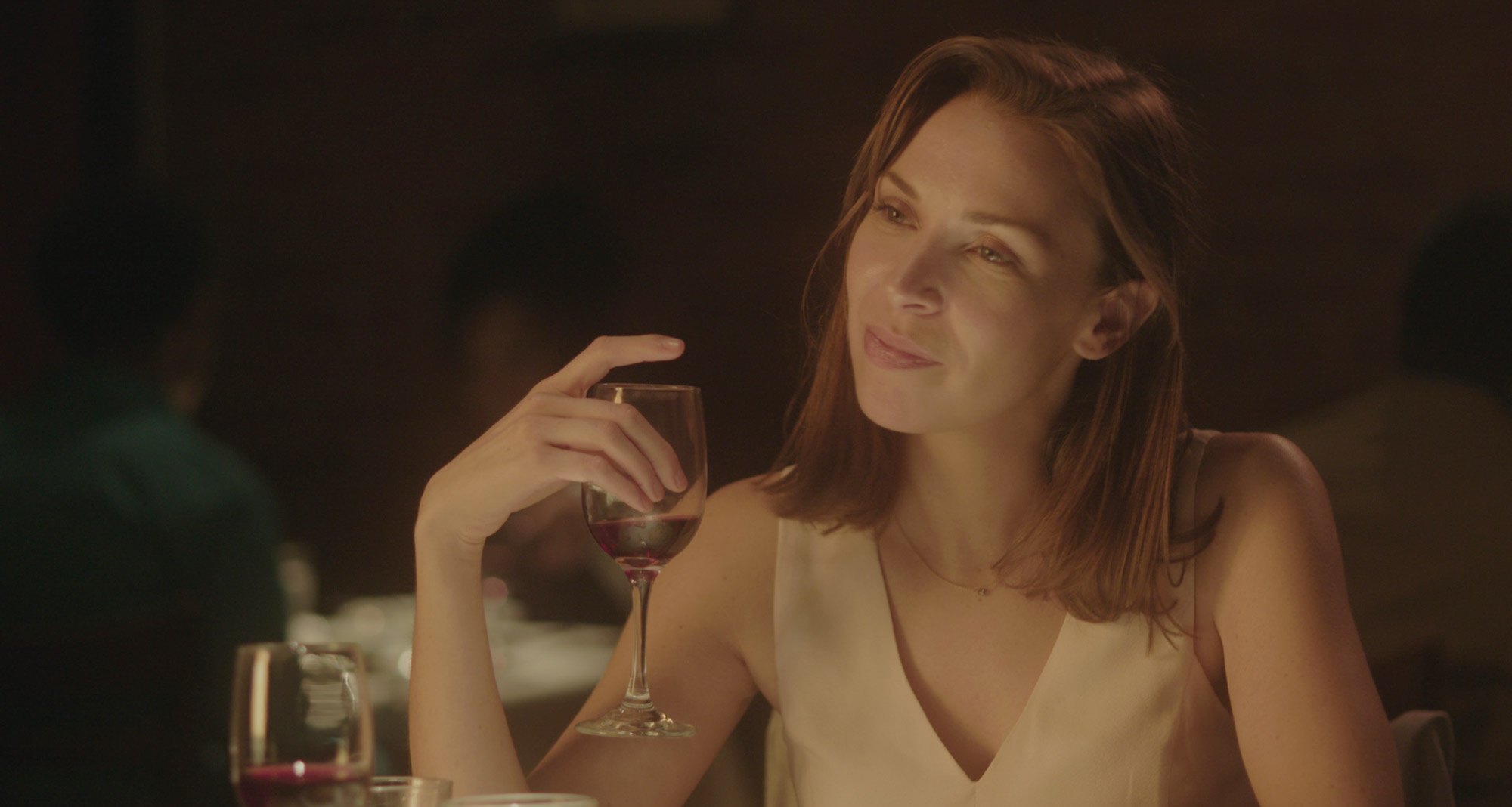 When working on the music with Roded, the composer, we found it a super interesting challenge. My idea for the music was that it would, for the most part, be source music, like it’s coming from the restaurant, but seamlessly transition to score at moments without the audience noticing, Roded agreed with that attitude. We had to figure out how to enhance each moment with the music, but have it go unnoticed. The film does have music for about 90% of it, which is surprising to some viewers, and shows we succeeded in our goal.

I’ve learned so much from my crew, actors, and the process. This film has been an incredible journey. I’ve been able to collaborate with so many talented people. I hope people will enjoy Check Please and hopefully learn how not to propose to their loved ones.