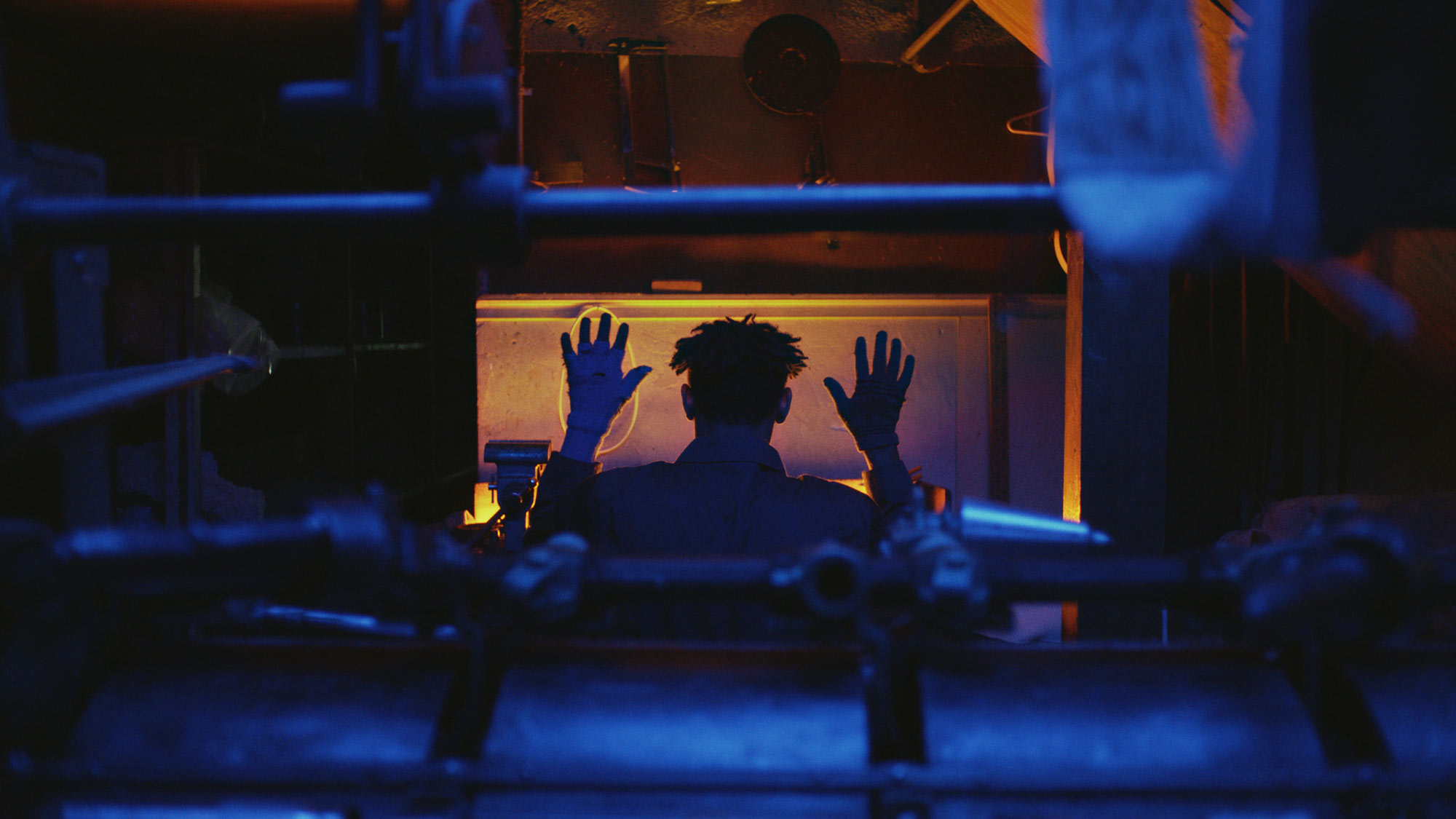 In Iqbal Ahmed’s newest short film Weave, a night cleaner in a 1930s fabric-weaving factory is inadvertently bestowed with awesome dance powers when he puts on a piece of magical fabric. Iqbal explains how inspiration born from an intriguing location spurred him to take a creative leap into the dance arena and also led to a fruitful symbiotic brand partnership opportunity.

The initial concept for Weave came to me by accident. As a little backstory, I always have a list of things I want to research and explore further. It’s a random list of things that interest me for one reason or another. That list was the genesis for several of my recent projects — I wondered if bugs could be used to create art, and voila — I discovered Steven Kutcher and made Bug Man. I knew nothing about sweat lodges, so I decided to make Goodknife as an excuse to learn more. And for some reason, fabric weaving was on that list. I’ve always been fascinated with textural things and personal but mechanized processes. In fact, I’ve always wanted to visit the Hebrides and weave tweed. I don’t know why — it always felt so evocative to me.

After digging around online, I discovered a fabric weaving factory not far from my home in Los Angeles. So I dropped in. And it was completely magical. The moment I walked in, I felt like I had been transported to another time — a time from the 1930s. Gigantic mechanical looms banged loudly. Cones of fabric were piled everywhere. Scraps of woven material scattered on the floor. Giant rolls of custom woven fabric stacked against the wall. Huge coloring vats. Dustballs the size of my fist were at the corner of every greasy loom joint. I was totally smitten. And unprepared. The factory owner was kind enough to let me explore and snap photos. I told him I’d be back — once I’d found an excuse to film there.

I went home that night and started brainstorming short film ideas. But I wanted to make sure that the factory was central to the concept. And that’s when I remembered that magical feeling I had when walking in. And I realized I wanted to capture that somehow. 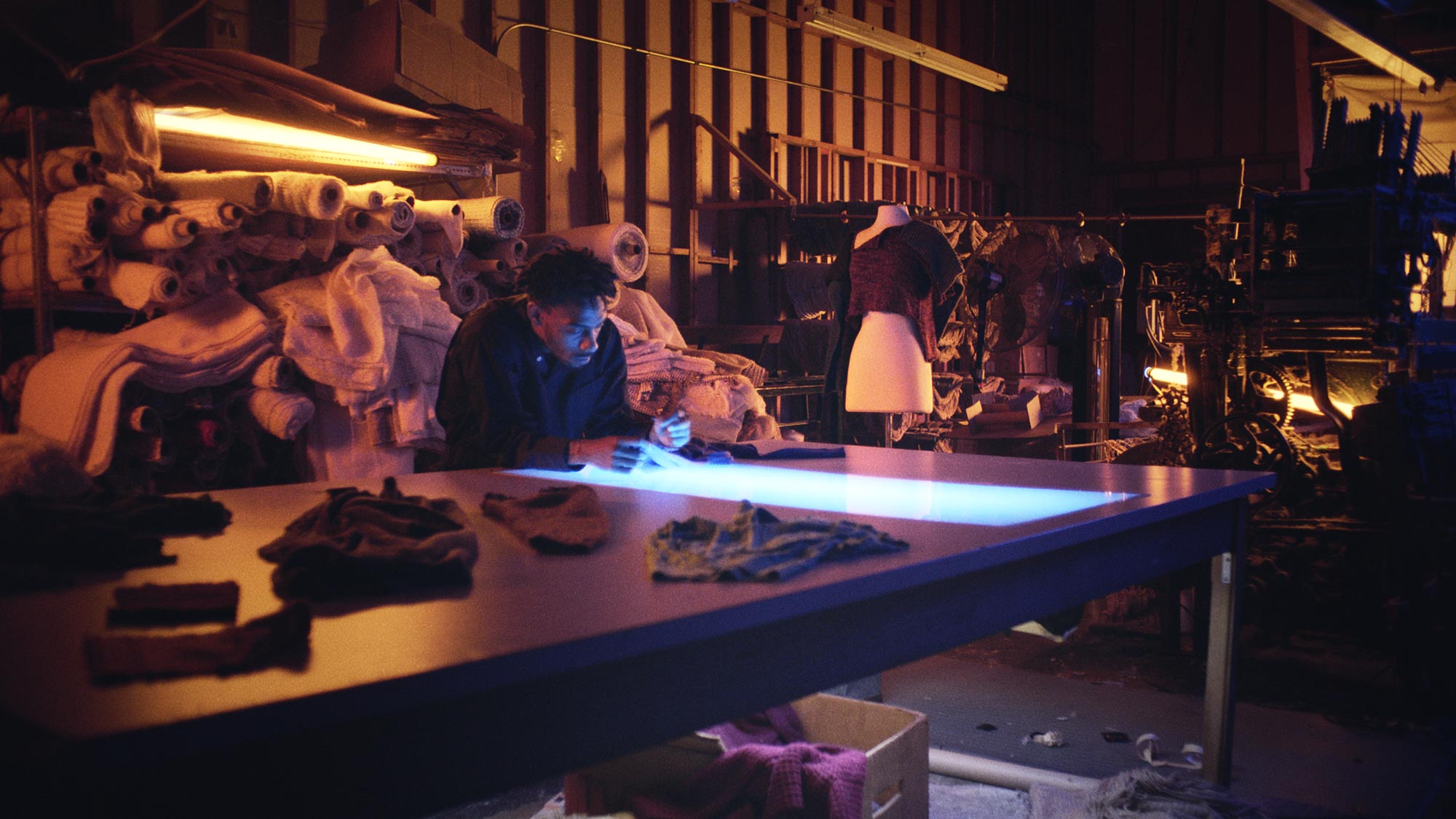 I decided to create a story that engendered a quality of magical realism. I thought it would be interesting if a night cleaner decided to try on one of these scraps of clothing that were scattered on the floor. I wanted to see that clothing impart the ability for him to dance — and for him to dance in a way he had never fathomed. It was my first time directing a dance film, and I wanted the narrative story to play a fundamental part in the very reason for dancing. I wrote the script and that’s when the real work started.

I teamed up with the incredibly talented Cinematographer, Shadi Chaaban, and we discussed the visual style and color scheme I wanted. In terms of camera movement, I wanted relatively static and handheld shots to bring us into this world. And then I wanted small smooth moves when the dancing first started, followed by fast, gliding, dynamic shots when the full-body dancing started.

In terms of color, the opening world needed to feel like a period drama — deep golden tones. During the discovery of the magical sleeve (and the scarf and glove dances afterwards), I wanted a mixed color temperature — something that played in the spectrum of golden tones, but started to bring in cooler color temperatures with pinks and blues. And then finally by the end, after our hero constructs the full suit, I wanted us to shift into a totally blue world.

I searched and searched to find a perfect dancer. Someone whose dancing actually felt magical and unexpected. When I found Jamar “Soup” Campbell, I knew I had someone special. He was so generous and willing to experiment for the sake of the narrative story. I really wanted to build the dance from the ground up. Initially, very isolated movements in the beginning when the hero pulls on a sleeve — only one specific arm was to be ‘empowered’. For the scarf dance, I primarily wanted his neck and shoulders to be affected. Jamar had so much control over his body that we were able to play with these wonderful isolated movements. 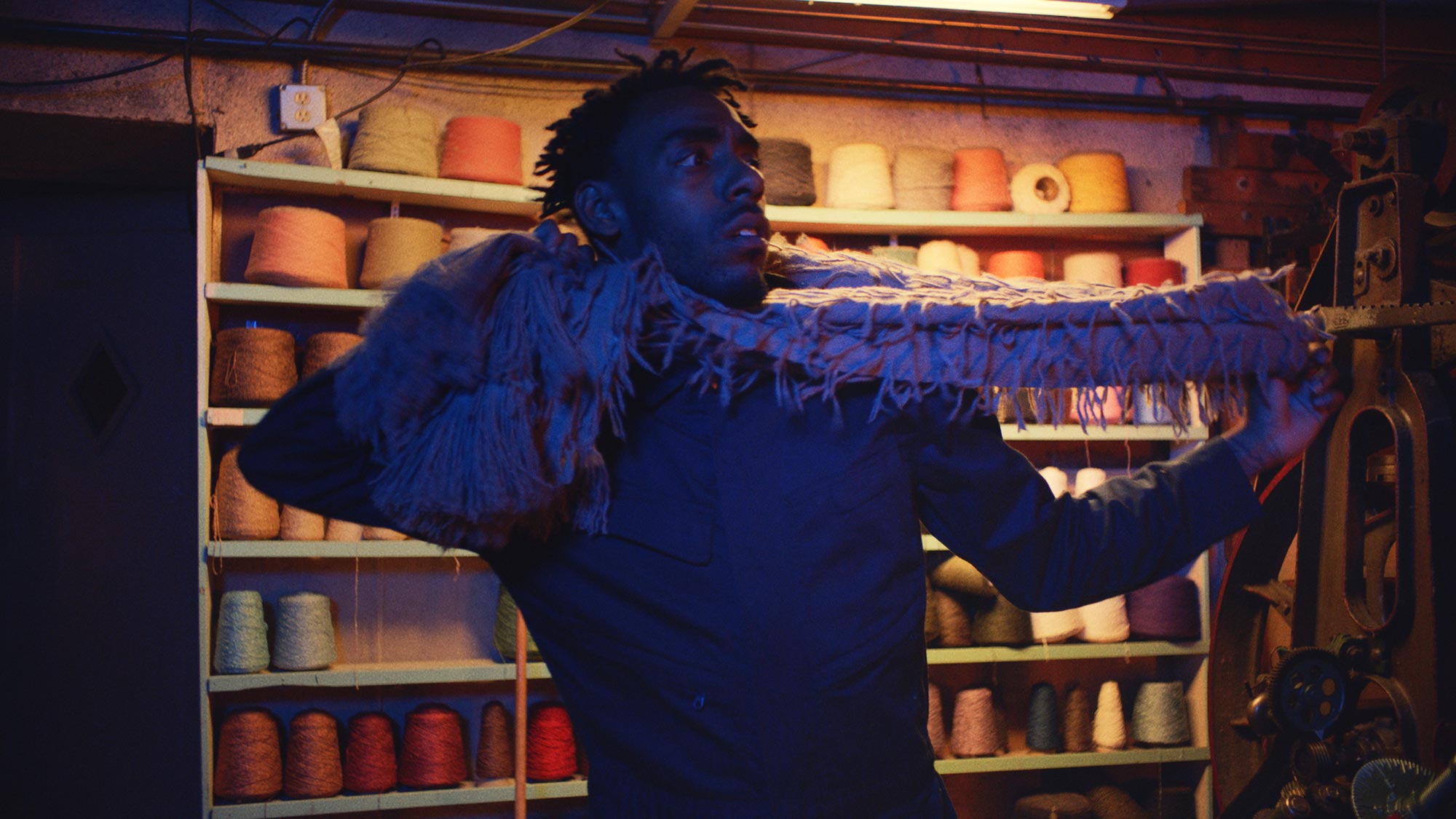 For the full body dancing, each location in the factory represents a different style of dancing — connecting, gliding, body movement, etc. Jamar was great at improvising based on the space and finding ways to make the dance unique. He came over to my apartment and we choreographed for days. At the end, we finally locked in the type of dance for each location in the factory.

Another important aspect was music, and Jamar and I listened to dozens of music tracks I had pre-selected in order to find the exact temp score to match Jamar’s various dances. Jamar was fundamental in helping to lock in the right kind of music — ultimately we used the temp music during the shoot for playback. And after we shot, I had my Composer Jean-Luc Sinclair match the tempo while still creating something original and specific.

I wanted it to look beautiful — but in a twisted way.

Jean-Luc is a fantastic electronic musician. And he was great about sending sketches before and after the shoot for us to dial in our sound. We wanted music that could feel like dance music but that also had enough darkness to round out and narrative mood.

Costume was always going to play a pivotal role in the film. After the hero finds those early scraps of fabric, he decides to make a full-body outfit. That meant finding the perfect costume designer — with the right design and seamstress chops along with a sense of imagination. 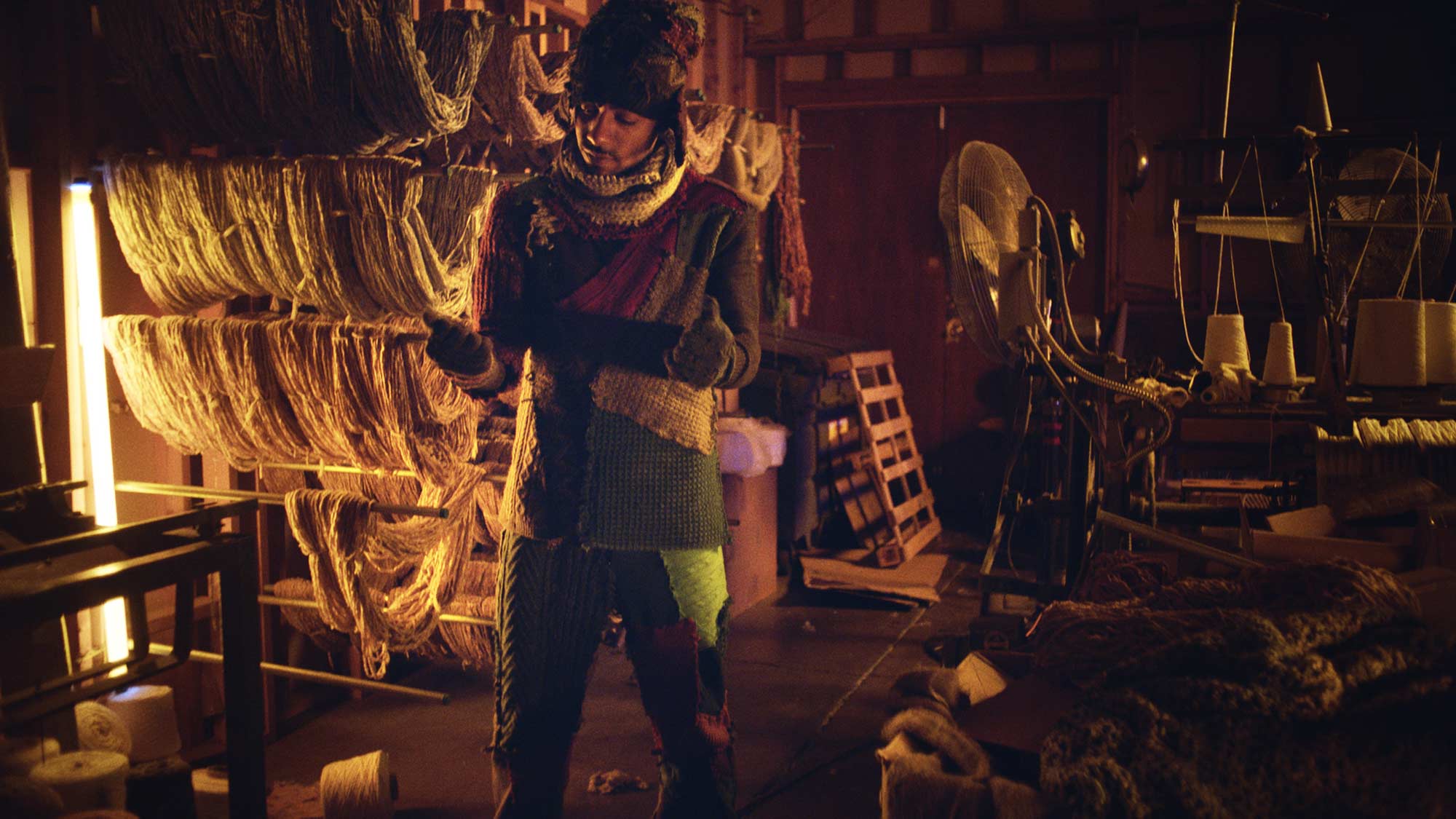 Tika Von Mehren, my Costume Designer, was totally game for making the patchwork outfit I imagined. I wanted the outfit to look rudimentary — as though it was constructed by someone who didn’t know how to sew. I wanted it to feel childlike and rushed. I wanted it to look beautiful — but in a twisted way. We talked about a color scheme and overall look — and then she went shopping. We had a blast going through piles of thrifted sweaters and blankets and other wovens — and we constructed the outfit piece by piece. Jamar later told us that dancing in the costume was like dancing inside a woolen teddy bear.

When I had a finished script, I reached out to a brand partner, Los Angeles-based avant garde fashion retailer Please Do Not Enter. The owners were really excited by the concept and the fact that clothing was a fundamental part of the story. The magical realism and the whimsy of the fashion appealed to them, so we teamed up.

The shoot was one very long day. With our small budget, each department really went above and beyond — Shadi Chaaban (DP) and his team raced to get all the shots we could, Tika and the wardrobe team were cutting and sewing throughout the whole shoot, and Jamar was a champion and danced his legs off. We shot with in 4k on an Arri Alexa with Zeiss Standard Speed prime lenses. The shoot was a blur, but at the end of the day, we got what we needed.

Jamar “Soup” Campbell examines the factory threading machines that will be a part of the dance climax.

Iqbal Ahmed (director, on the right) at the monitor discussing the upcoming shot with Jamar Campbell (dancer) and Connor O’Brien (movi operator)

Cami Starkman, my Editor, did a tremendous job with the footage. She had a great sense of rhythm and timing, and it was exciting to see the film take shape under her guidance. I wanted to construct a banality for the film introduction in order to contrast with the surprise of the dance reveal. Cami was so responsive to my editorial feedback, and I think we had a really constructive relationship.

Jacob Houchen, my Sound Designer and Mixer, constructed a sonic world for the film. It was important to recreate the buzz of fluorescents, the crackle of the phonograph, and the textures of footsteps and sweeping. I think that especially helped set the stage for the big turn of the dance reveal. 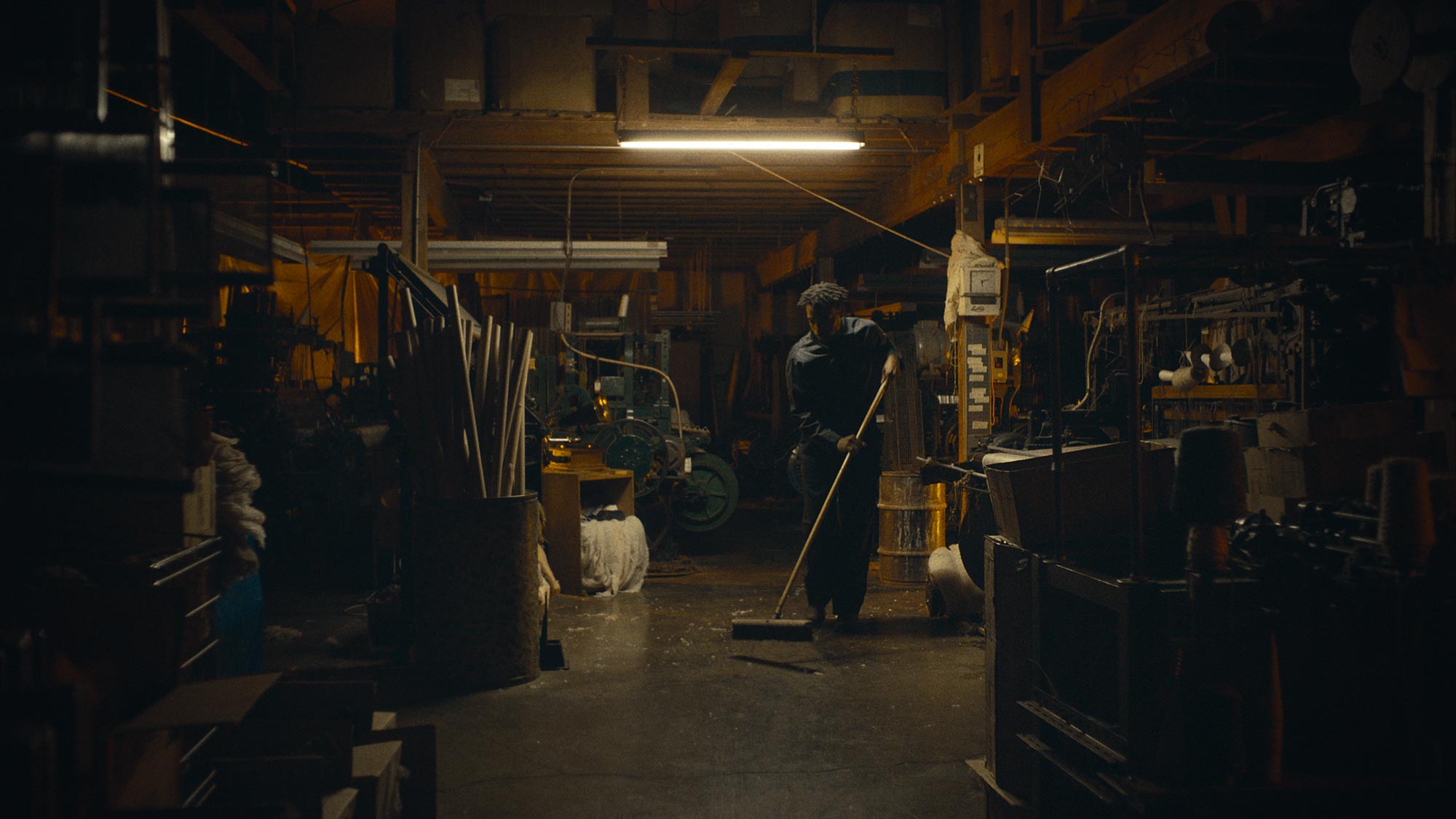 I’ve got a few things in the pipeline. My debut feature film, The Answer, is releasing domestically in the next quarter. I’ve also got a couple of other features I’ve written, one of which I’m hoping to direct in the next year.

I’ve got an Adidas spot that is about to launch. There are also a couple more branded projects in the works — some that are really interesting in terms of storytelling. After all, that’s what all directors are really trying to do — tell stories — whatever the medium. In fact, I’ve been really excited about the directions branded films have been headed — more and more brands are interested in telling stories. And when the brands involve directors early on, there is an opportunity to wrap the branding really naturally into the story.

So, happily, things have been busy.