Johan Rijpma is a visual artist whose work has been confounding our expectations here at DN for many years now. By falling subject to the intense focus of his artistic gaze, formerly unconsidered objects are meticulously transformed from their ordinary status into so much more. Marking a new phase in his creative output, new film Extrapolate sees Johan’s analytic procedures turn to the use of hand drawn animation in a manner so reflexive that it’s likely to cause anomalies in the space-time continuum. Johan joined me for a long overdue interview in which we look back on the drivers and techniques of his early work and to the future conceptual puzzles he plans to solve.

Extrapolate probably tops some scientific measure for how self-referential a piece of artwork can be. What inspired this mind bendingly reflective piece?

I think the creative process is always a collaboration, even if you work on something by yourself. In my previous films and animations, I tried to emphasize this by letting objects and materials determine the development of the process that I had setup. My position as a ‘creator’ is slightly different for each project, in some films I try to limit my own arbitrary choices as much as possible and then I’m mainly trying to let the material express itself.

In other projects, I try to find a more evenly balanced collaboration. For Extrapolate however, I wanted to make a more radical shift and instead of focusing on the unpredictability of the external I wanted to focus on the act of predicting itself. Therefore, the starting point and the subject very naturally became my own hand and my own creative choices within the logic that I had developed.

The film was created with support from Animation Artist in Residence Tokyo 2016. How did you become involved in the residency project and what did you bring back from your time in Japan?

I heard about the Animation Artist in Residence program from a friend a few weeks before the application deadline. I could immediately see that this was a great opportunity to work in a new way and in a new setting. And of course to visit Tokyo, a city that always seemed very unreal and crazy to me.

I think the creative process is always a collaboration, even if you work on something by yourself.

The goal of the program is to connect artists from different countries and cultures to work in the same space and to have an exchange of ideas, plans and knowledge. So besides working on a new animation, the two other artists and myself would also give presentations in Tokyo, Osaka and Kyoto. In these presentations, we would talk about our work and about other artists or art institutions from our countries that we had connected with in the past. We also visited many different Japanese animation companies, schools, media art exhibitions and festivals. Like the Georama Festival where we met Brucke Bickfort, Caleb Wood, David O’Reilly, Don Hertzfeldt and other great animators.

All these interactions with artists from different countries and seeing people work with so much love, skill and dedication really gave me a new appreciation for animation in general. And besides all the new friends and connections I made during the residency that is definitely something I brought back from Japan.

Watching this, it feels as if I could easily find myself trapped in an eternal loop of extrapolation – could you discuss how you came to define the boundaries of the piece?

The process started by extrapolating the extrapolation process in the grid. When the line leaves the grid this process spreads to the movements of the different segments in my hand. From here I tried to think about other logical transitions that follow this trend of breaking a boundary and spreading to a new physical space and process. And the most logical boundaries I could find were:

I started this animation in my home in the Netherlands but this last boundary became the studio in Tokyo. In the recording I made of the studio I also filmed part of the window. At first, I thought it could be interesting to see parts of the outside world but all I could see in the recording was the reflection of the inside of the studio. Then I got the idea to make that scene into a turning point of the animation where you can see the whole situation, the table, the paper, the pen and the studio space. And to reflect back to the beginning through this process of extrapolation, eventually extending down to a single point.

What were the processes and tools which made the film possible?

The only tools I used were a pen, a light box and many sheets paper. The process was actually very simple as well. For every drawing, I first extrapolated the motion paths (the rows of dots) by adding one dot at the end of each row in the direction it was growing. Then I trace the whole drawing again while moving each segment to the new position. This part is quite systematic, but at the same time, I had to improvise how all the segments could still stay connected while drifting apart. I had to think about how the hand would react, if the skin should break and if there would be bones, veins or tendons underneath. I didn’t study any anatomy, I wanted these transformations to be a kind of naive and a playful prediction of what would happen next. 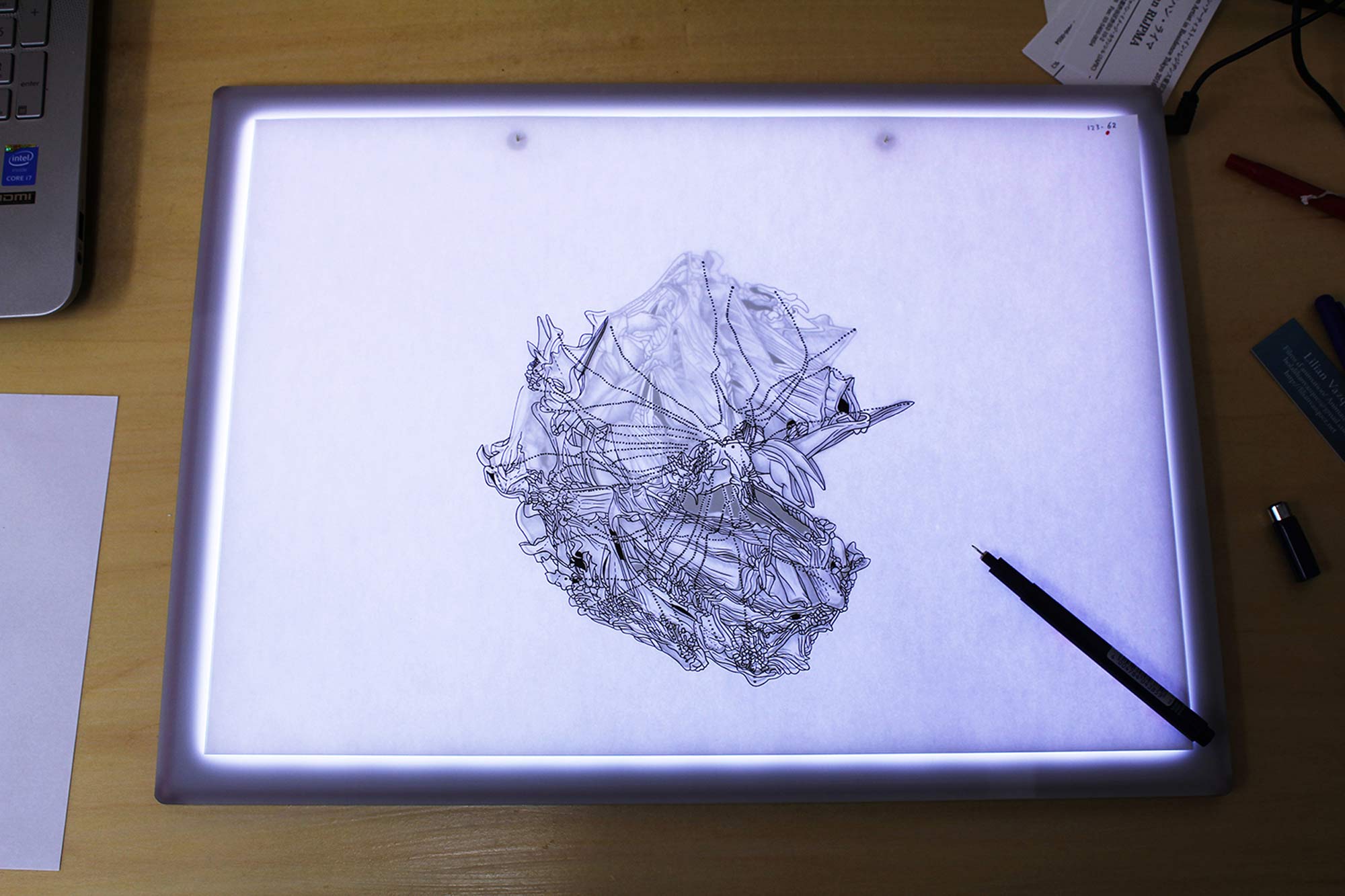 For the zoom out shot in the studio and the zoom in on the grid at the end, I used a more abstract way of extrapolating. By only looking at the lines instead of the things they represent. With these more abstract transformations, I wanted to connect the beginning and the end of this journey and reflect on the abstraction of the very big and very small. And perhaps on the limits of what we can really understand through systematic inspection.

As is common in your work, the soundtrack begins with diegetic sounds before morphing and mutating in relation to the image. How were these sounds composed for Extrapolate?

That’s right, I tried to apply a similar extrapolation process to the sound design. First I recorded the sound of the different activities, drawing a line, crumpling paper and zooming in and out.

I had to think about how the hand would react, if the skin should break and if there would be bones, veins or tendons underneath.

In the animation, I used the last frames of the video recordings to determine the direction of the extrapolation. For the sound design, I looped the last second of each sound recording and gradually stretched this out in different ways. The software I use is Renoise, it’s based on the old Tracker music programs with the vertical timeline that becomes very hypnotic when you stare at it for while. It’s not the most practical choice for sound design but I feel quite comfortable in it and I think it’s great if you want to test a lot of different ideas quickly.

Did making this piece lead to any deeper examination of your motivations as an artist? What is it that inspires you to see ‘more’ in observations others tend to dismiss – such as the spilt water of Refreshment or the broken fragments in Descent?

Yes definitely, Extrapolate really felt like a new direction for me. And while I was working on it I realized that hand drawn animation opened up a new territory for me to explore and that I should dive into this much deeper.

With my previous projects, I personally tried to focus on this relationship between the subject and the object. And between my own presumed control and the unpredictability that arises from the external objects or materials that I would work with. I tried to reflect on this relationship in a simple and playful way by taking on different roles in the creative process. But I have also been working on visual models that would describe these experiences of different positions as a ‘creator’. However, I always failed in creating any models that could give me a better perspective on the matter. But after the JAPIC residency, I realized I should animate these models in some way and connect them to the physical, so they naturally seem to connect to the observer like mental tentacles scanning the external.

Through these ideas, I think the motivation for my work became more realistic and it shifted a bit more towards the expression of perceptual systems instead of projecting the act of self-reflection on material objects, like I was doing in Descent and Refreshment.

We’ve enjoyed watching you manipulate sellotape, paper and even cats to great creative ends in the past. How are you planning to mess with our minds next time?

While working on my previous projects there were several stages in which I had to repeat certain simple procedures for hours on end. Like rotating the sellotape a few degrees every minute, or tearing up pieces of paper into 2048 pieces and putting them back together. In these situations I would occasionally experience my thoughts slowing down while the awareness of my thoughts seemed to be unaffected and in a way even enhanced. Through this forced concentration and the contrast with my everyday awareness of thought, I would automatically generate these mental images of transforming geometric models that represent this change in concentration.

Now that I have been working with hand drawn animation it feels like I should turn these mental, conceptual images into visual / physical images and puzzle this altogether with the creative models that I have been working on in the past. Hopefully I can turn this into something coherent that might address this subject, object experience in a new and perhaps more direct way. This might all sound a bit vague, but this is one of the projects that I just started working on and I’m very excited about.