Whilst preparing dinner for his partner, everything seems to go wrong for zombie Lee, bowls catch on fire, his limbs fall off and when his temperament reaches boiling point there’s only one thing to be done. Order takeaway. Munchies is playing The Shortest Nights EEK! category and we spoke with Director Sinead Stoddart about how she turned this pitch into a fully fledged festival frontrunner.

Where did the idea for Munchies come from?

I made Munchies as part of my Research and Concept brief in my second year at UCA Farnham. I wanted to make an animation that could be both comical and horrific. So, Munchies originally started as a ‘zom-com’ a romantic yet horrific comedy called My Zombie Valentine I developed in my first year at UCA. This narrative had three characters, two zombies celebrating Valentine’s Day and a delivery boy. This initial idea was pitched as a group project with four animators. Unfortunately, another film won the pitch, so I left My Zombie Valentine on the back burner to be changed and adapted. Munchies was a project that I wanted to expand my knowledge of puppet making with, looking into more complicated techniques and materials than what I was used to working in previous years. By my second year though – I was ready to make it on my own.

University is stressful, but getting stressed about stress is unhealthy, almost as unhealthy as eating the greasy teenager delivering the pizza.

Munchies has such a great dark humour to it, could you talk a bit about writing it and translating your ideas into an animation?

The breakdown of the story was similar to what Munchies is now: a zombie cooking dinner for two, things would go wrong in the kitchen, body parts would fall into food bowls, the result of which is ordering a takeaway and, instead of eating it, they devour the delivery boy instead. During this period of university I was obsessed by Mira Grant’s zombie apocalyptic series and binge watching the boxset of The Walking Dead. The zombie theme was high up on my list of characters that I wanted to animate. 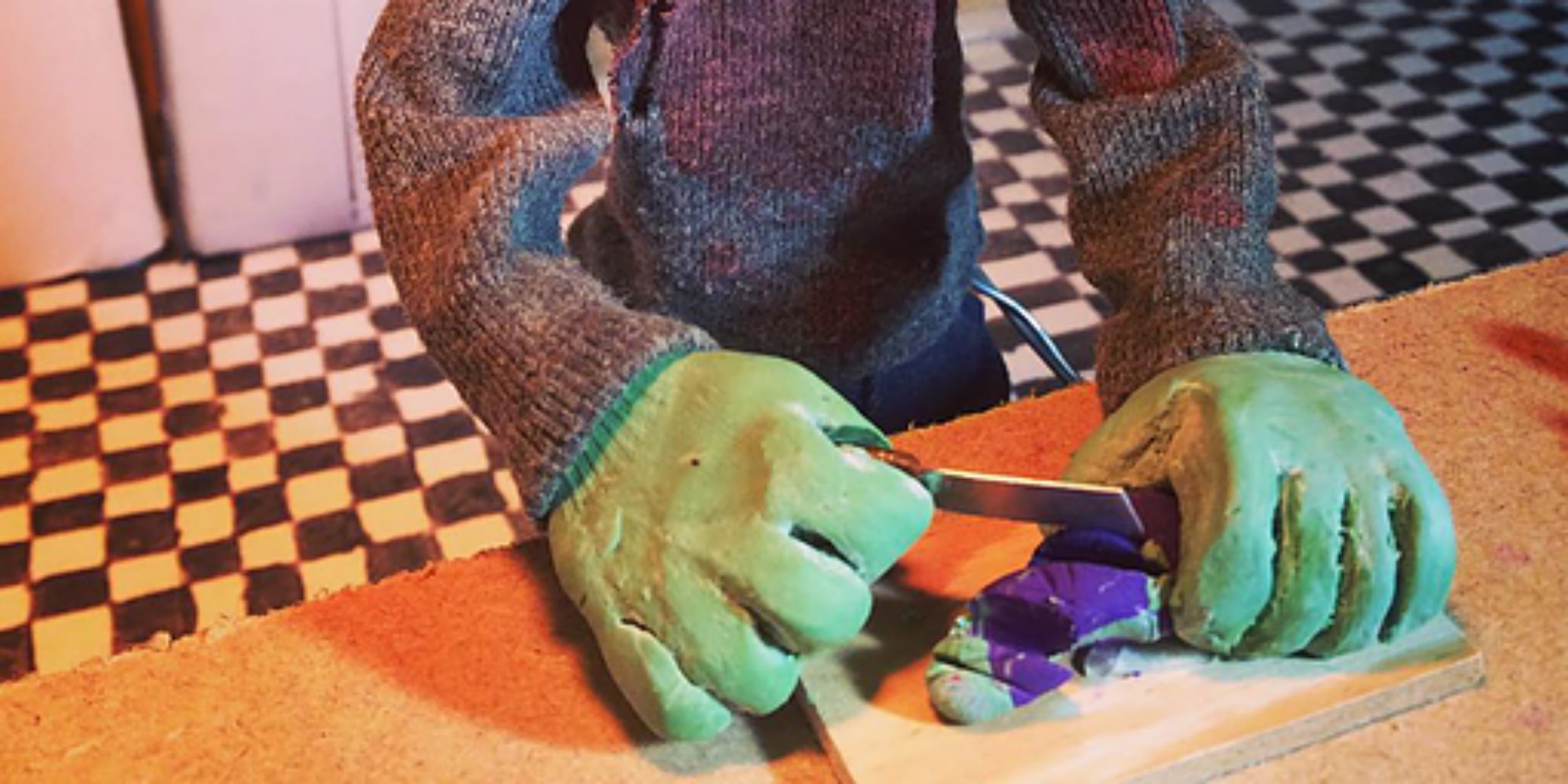 But equally I wanted to make my zombie character more relatable to an audience and I felt comedy was the way to go, who doesn’t like a bit of dark humor? Munchies depicts the struggles of a hungry zombie who is trying to cook a meal. I wanted to convey that the hungrier you are the harder it is to concentrate and the easier it is to mess up. I personally get hungry far too often as I forget to take breaks when animating in the studio by myself, some days my friends have to knock on the studio door to remind me to eat, on those days work just takes over and nothing seems to go right and even the smallest thing can break a person. Munchies was my way of telling myself that it’s okay to smash plates, burn dinners and order something greasy from a pile of take away menus shoved into a kitchen draw. University is stressful, but getting stressed about stress is unhealthy, almost as unhealthy as eating the greasy teenager delivering the pizza. I just want audiences to watch my film and, for a brief moment, enjoy a laugh.

A short film helps one to learn time management for when a longer project comes along.

As it’s the running theme for The Shortest Nights festival, why short film?

Short film is perfect for a student animator to work with, especially on a solo project. A short film helps one to learn time management for when a longer project comes along. A film of two and a half minutes like Munchies took me four months from start to finish with around a month and a half of that time spent animating in the studio.

As a follow up to the last question, what is it that attracted you to stop motion animation specifically?

My obsession for stop motion stemmed from watching Wallace and Gromit: A Grand Day Out when I was really young on a recordable VHS. I realised that Gromit had a fingerprint on his nose and that meant this story was made by hand. As I got older I began to explore other, darker avenues of stop motion, favouring animations like Grizzly Tales for Gruesome Kids, Aardman’s Darkside and films by Tim Burton. It was only when I attended Klik Animation Festival in my Foundation trip to Amsterdam in 2013 that I realised just how dark stop motion could really be. So since childhood, when I realised it was possible for these shows to be made – although at the time I never appreciated how much time, skill and effort goes into a few seconds of animation – I wanted to do that too.

Munchies, at this point, has played a lot of festivals, congrats! What has the audience reception been like?

Well so far, of my two films that are making their way around the festival circuit, Munchies is the most popular to be screened, it gets a lot of laughs which has made all the effort worthwhile. When attending film festivals I have been asked how many people were on my team working on this film and I then explain that as a student film, it was made with a limited number of people on board: myself, a student voice actor and an encouraging university as background producer, keeping me in check with deadlines. I feel that people underestimate animation films, especially in terms of student films, unlike film production; animation on this level has very few people involved and a lot of time, effort and soul is put into it.

Have you got any new films/animated projects in the works?

I have just finished my graduation animation Tone Death. After I made Munchies I decided that I wanted to develop my skills in horror styled stop motion. Tone Death features the fear and pressure of failure and how it can lead to a bloody success. It will feature animated stage blood and latex gore, which I am very excited for. I wish I had used them in Munchies but I needed to make the choices I made for Munchies so that I could grow and improve my choices for Tone Death.  This latest film has only just been entered into film festivals and has yet to be selected for screening.