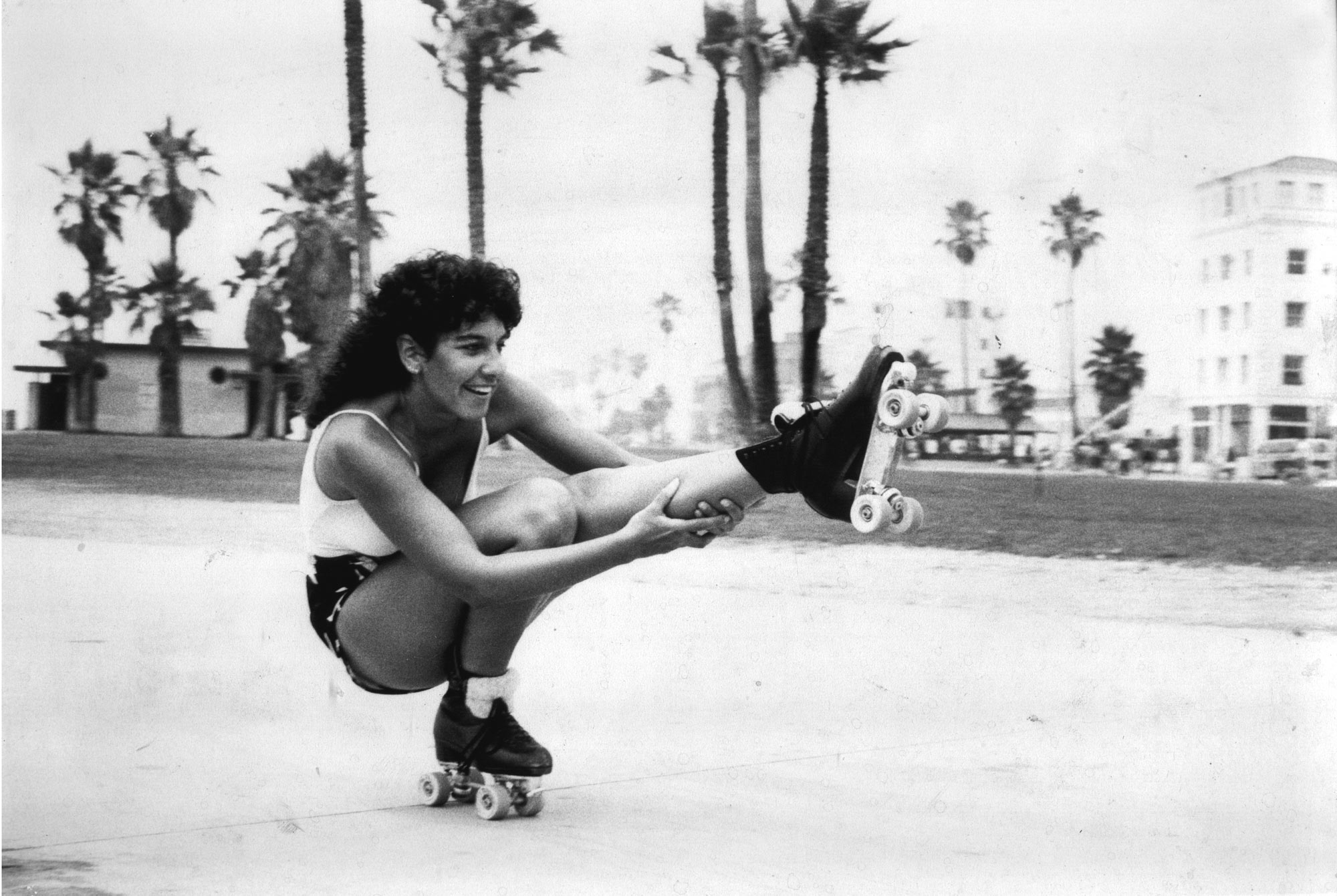 Kicking off our 61st London Film Festival coverage, Kate Hickey’s debut documentary feature Roller Dreams, tells the story of the rise and fall of the iconic rollerskate dancing scene of the 80s and 90s on Venice Beach, California. This beautiful and unusual sport was a sanctuary for many young lives, which became a major attraction and a heartbeat for the beach community.

Tragically, it was a haven ill-fated to be bombarded and demolished by politics, the influx of the gentry and enforced racial segregation; shattering dreams and destroying lives in the process. Kate’s historic documentation provides an opportunity for those affected to tell their stories and expose the true treachery of how this cataclysm came to pass. I spoke to Kate about how the film evolved from a short to become an insightful and enlightening feature length cinematic window into the dynamic ‘Disco Alley’ subculture.

What inspired you to make Roller Dreams?

The seed of inspiration came from none other than Xanadu, the movie starring Olivia Newton-John. When I moved to Venice Beach in 2007 to chase my own ambitions to be a film editor, I discovered the original skaters who inspired the hokey 80s movies were still alive and still skating! After spending weekends getting to know them and falling in love with their distinctive skating styles and how this reflected their big personalities, I knew a film needed to be dedicated to them and their craft.

How did you go about tracking down the original roller skate dancers and how willing were they to participate?

Four of our six main characters were still skating at Venice Beach so I would see them there on weekends. However, the two lead characters Sally and Mad were missing in action. After interviewing many people, Mad’s name kept coming up over and over again as the roller skating guru and it was clear the group missed his presence. It turned out Mad had moved to Utah and swapped his skates for motorbikes. I kept trying to contact him through Larry and eventually he agreed to be interviewed.

I flew to Utah and spent a weekend getting to know him and that’s the first time the story really took shape as he was clearly embittered over what had gone down over the years. He mentioned Sally a lot as if she was a lost love and potential skate partner of sorts. So Diana and I tracked her down in San Diego and she became another missing part of the puzzle. Diana was a soul sister with a lot of heart and gusto & female filmmakers always need female heroines.

There is a distinct turning point in the film, from admiration and playfulness to a tale of disillusionment and tragedy. At what point did you become aware you were making a film as much about gentrification, racism and political currents as you were about skating, and how did that affect the planning and execution of the film?

When I first started out making the film I planned for it to be a short film – fun & playful, profiling some of the most colourful characters in the scene. Then when I finally got to talk to Mad in Utah, he told me about his childhood in Watts and it became clear how much the Watts riots had shaped his life and belief system. He was very sceptical of the law and racism in society and he applied it to Venice Beach and what had happened to them as a group over the years.

It was a story with multiple layers which could prove tough to balance at times but we knew all aspects needed to be explored to give the film its backbone and raison d’etre.

Producer Diana Ward was very interested in the other forces at play in the story and she came on the journey for many more years to delve further into this side of things. Then Cecilia Ritchie secured the funding from Screen Australia and ensured we all stayed on track when it came to the line of enquiry we were following. It was a story with multiple layers which could prove tough to balance at times but we knew all aspects needed to be explored to give the film its backbone and raison d’etre.

What was Mad’s reaction on the finished piece?

Meeting with Mad was instrumental as it was clear how much emotion he was holding underneath his tough exterior. There were years of turmoil and mistrust that had built up within him and he gave a very good reason for wanting to crack through to tell a greater truth. He loved the final piece and was moved to tears. Mad has been out at Venice Beach skating every Sunday since the LA film festival screening. Mad definitely has the skating bug again and I’m so proud that the film has ignited the skating dream within him again. He may not be the 6ft5 Adonis people revelled at in the 80s but he has the same mischievous smile and smooth moves, that’s pretty cool to see.

How did you obtain the stock footage? Can you talk us through the editing process?

The main 80s footage was tracked down in the form of high 8mm tapes that were owned by one of the old school skaters Morgan. Diana and I took them to a facility to get pro-resolution files to edit with. All the 90s footage was VHS and some DVCam and Diana and Darren our post supervisor worked hard on getting the best versions of those ready to edit with. We started out the film on Final Cut 7 but then switched to Adobe Premiere Pro to deal with the many different formats we had to edit with. We also used other archival footage and some newsreel, which producer Diana worked hard on collating to fill certain story and timeline holes.

What equipment did you use and why?

Our DoP Toby Oliver used the Canon C300 to shoot our key studio interviews and b-roll. We used the Blackmagic as a second camera on many occasions and a lot of the older interviews and verité was shot by me on an HDV Cam. Then we used Premiere Pro to edit our main interview and b-roll footage with the archival footage. Our post supervisor Darren handled the back-end which was quite painstaking due to all the mixed formats and deterioration that can happen over the years! We finished in Final Cut Pro X and used Resolve to colour correct. Our sound mixer worked in Pro tools.

You have been working in the LA film scene for a few years now, how did you obtain a long-term working visa to the States? Did you need a permit to film on Venice Beach?

I started out on an e3 working visa with a company editing and then I got a Greencard through marriage. We didn’t need a permit to film on Venice Beach but maybe laws have become heavier lately I’m not sure. We kept things very minimal to not draw too much attention.

I’m currently editing a TV show for Sundance and love working on dramedy and coming of age films and TV shows. I am hoping a lot more of these will materialise. In addition to that, I have another feature documentary about the Jason Bourne of the dog rescue world, which I’d love to make.