Travelling across the globe on a wave of accolades and awards, Kaveh Mazaheri’s Retouch sees a wife’s morning routine unexpectedly disrupted, offering her an opportunistic route of escape from her life. I caught up with Kaveh ahead of Retouch’s London Film Festival screening to discuss working within the Iranian film censorship system, bringing the unpredictability of documentary to fiction filmmaking and staging a convincing accidental death.

How does the filmmaker’s relationship with the Iranian government censors impact on the stories you want to tell and the ways in which you’re able to tell them?

Frankly speaking I cannot imagine a situation with no censorship. The reason might be that the first film I made was in such conditions. It was made in Iran and for Iranian people. I have to say that I really love to make movies in Iran, about Iran and my fellow countrymen. Actually all the filmmakers who are working in Iran have to learn gradually what stories and dramatic situation they can put their efforts into which the censors will have the minimum effect on. Still, I do love making films in my own country despite all of the existing limitations. I was born here, I breathe here, I know its people and I can write and tell stories about them.

What do you feel your prodigious work as a documentary filmmaker brings to your dramatical projects?

Making documentary is an adventure full of discovery and intuition. There are many unpredicted situations which can surprise you as a filmmaker. You are like a creator from the research step till sound making and finishing the movie. The first time I made a fiction film I realized that that level of discovery is not in a fiction film and I think that is why the procedure of making a fiction film can become a boring and absurd process.

I was born here, I breathe here, I know its people and I can write and tell stories about them.

I try to keep this discovery and intuition in all the processes of making film. As an example, I strongly insisted on shooting the film in Sonia Sanjari’s (my lead actress) real apartment. I believed that the spirit of her real life was in that apartment and the atmosphere in that home could be transferred to her. It might sound crazy but I was strongly sure that Sonia’s performance could be influenced by being in her real home. This is one of the things I have learnt from making documentaries. 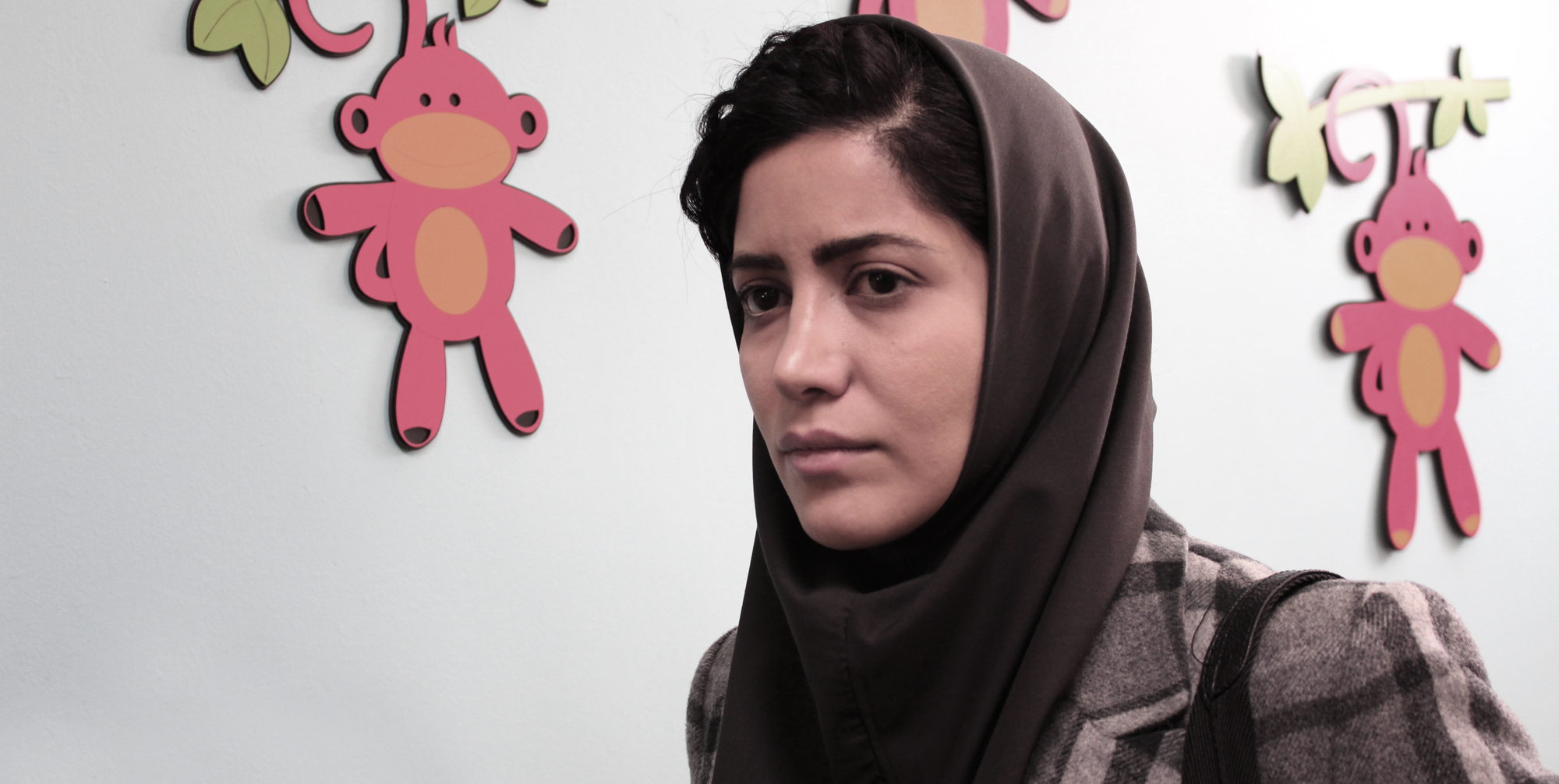 How did a 5 minute Facebook video come to inspire this multi-award winning short? At what point did the larger story of Maryam’s escape from her marriage present itself?

That video was a primary spark. It took a year and a half for the script to be completed. During that period I was constantly thinking about the story, and I tried to complete the script and put the scenes all together like different pieces of a puzzle. As usual I began by recalling my personal experiences in my mind. First I was sure that the story should be about a person who is struggling to survive from a difficult situation and will get rid of it. Then it came to my mind that that person should be a woman; a woman like many other women I’ve seen throughout my life, the ones who have been silent for almost all of their lives.

The next question was, who this woman was. I used to work in a film magazine for a few years. I knew a woman there whose job was retouching photos of foreign actresses like Angelina Jolie, Julia Roberts, Keira Knightley and others to make their photos publishable for our magazine. I thought this woman’s job could be fitted to my film’s theme. With regards to Maryam’s early adulthood marriage, I can say it could be one of the main reasons for her decision in the film but for sure it is not the only reason.

You don’t show Siyavash doing anything truly egregious to Maryam, yet I found myself firmly on her side as she constructs her alibi. Was there a temptation to include a clear inciting incident to justify her (in)action? Were you ever concerned that she might lose the audience’s sympathy?

That was a risky decision during writing this dramatic story. It is because audiences are used to knowing the backgrounds of all the main characters or at least knowing the reason for killing Siyavash and Maryam’s abnormal reaction. Honestly, I believed there was no need to tell the why of Maryam’s decision or go into more details of Siyavash’s character. Everybody can fill in this reason during watching the movie based on their own personal experience.

The audience’s personal life experience is something that we as filmmakers can and have to trust in and count on.

In addition, telling the reason could have made the world of the movie so small and limited. It was a fortune that different screenings in different festivals proved that my decision was not wrong. The audience’s personal life experience is something that we as filmmakers can and have to trust in and count on. This kind of approach respects the audience by not giving them everything in a disposable manner, but rather allowing them to combine themselves with the storyline to reach a personal story and personal appreciation.

Sonia Sanjari delivers an impressively nuanced, nested performance – for much of the film concealing a secret shared only with the audience. How did you work that subtle duality into her performance?

Sonia is a great actress. You can always count on her intelligence and intuition as a director. We talked a lot about the main theme of the movie and her character as well to reach the common understanding about Maryam. Sonia had to perform the role of a woman who herself is performing throughout the day. A nested performance which could be complicated. She had to transfer conflicted and grotesque feelings to the audience.

Sonia did her level best to concentrate on the character not doing anything wrong. So we didn’t have any special conflict during shooting the film and she did exactly what I wanted her to. She could have these conflicted feelings in her eyes. Actually her eyes give you different feelings, you can trust her and also be scare of her at the same time. You can find both grief and cruelty in them. You might love her and hate her simultaneously. This is the exact duality that is in the film and thanks to Sonia, the result is what we wanted.

I’m aware you went back to do reshoots, how much of the film did you need to recapture and what was it that you felt was lacking the first time round?

Yes, there is a scene in the film where Maryam’s husband in under the barbell and dying. This death couldn’t be the same as other deaths, like with a knife or a bullet. I have to add that I am coming from documentary and of course creating a real scene is much more important to me than anything else. The first shooting of this scene was not perfect as we were using fake bells. Then we tried combining the real and fake barbells.

In the edit we found that this scene didn’t work well. That scene is like the engine which drives the film and leads to the other consequences. That was why we decided to recapture it but this time with real barbells. I told Mohammad Ziksari (Siyavash) that there was no other choice but we were also worried about him too. Fortunately, he agreed and did his best to get this shot. But he had neck and back pain for one week after reshooting this scene.

The Trump travel ban meant that there were several USA festival prizes you were unable to accept in person. Have you since been able to gage western audiences’ reactions to Retouch comparative to its native Iranian audiences?

It is true that I couldn’t be in USA because of travel ban but I was lucky to have some good friends to be there on my behalf and of course social networks are not yet banned. As an example, at the Tribeca film festival, we received many handy videos by different people which told me their views. There are some of them available on the Retouch Facebook and Instagram.

The feedback is more or less the same. I also had a chance to send my message to audiences by Skype at other festivals like Traverse City Film Festival. In European and Asian film festivals to which I could travel and be there in person, the reactions of people who watched Retouch were very similar to Iranians’. It’s really wonderful for me to see the reactions are so similar in different parts of the world. They get associated with the character of Maryam, regardless of their culture and language. The fact that there is this massive accompaniment from the majority of audiences is very valuable to me.

What can you tell us about your forthcoming feature project Botox. Do you have any other new projects in the works?

Botox is a feature film about two sisters who kill their brother. The story looks like Retouch in some ways, but the main them and characters are completely different. The biggest difference is in the amount of imagination in the film and its atmosphere, which at a certain moments becomes heavily subjective. I am now engaged to find a good producer and good production conditions for Botox to start the project. I have finished a short film script with name Underneath the Pine (based on the story Three Drops of Blood, written by famous Iranian writer Sadeq Hedayat), I will start to produce and shoot it if I have to postpone Botox production. However, all my efforts are to make Botox.