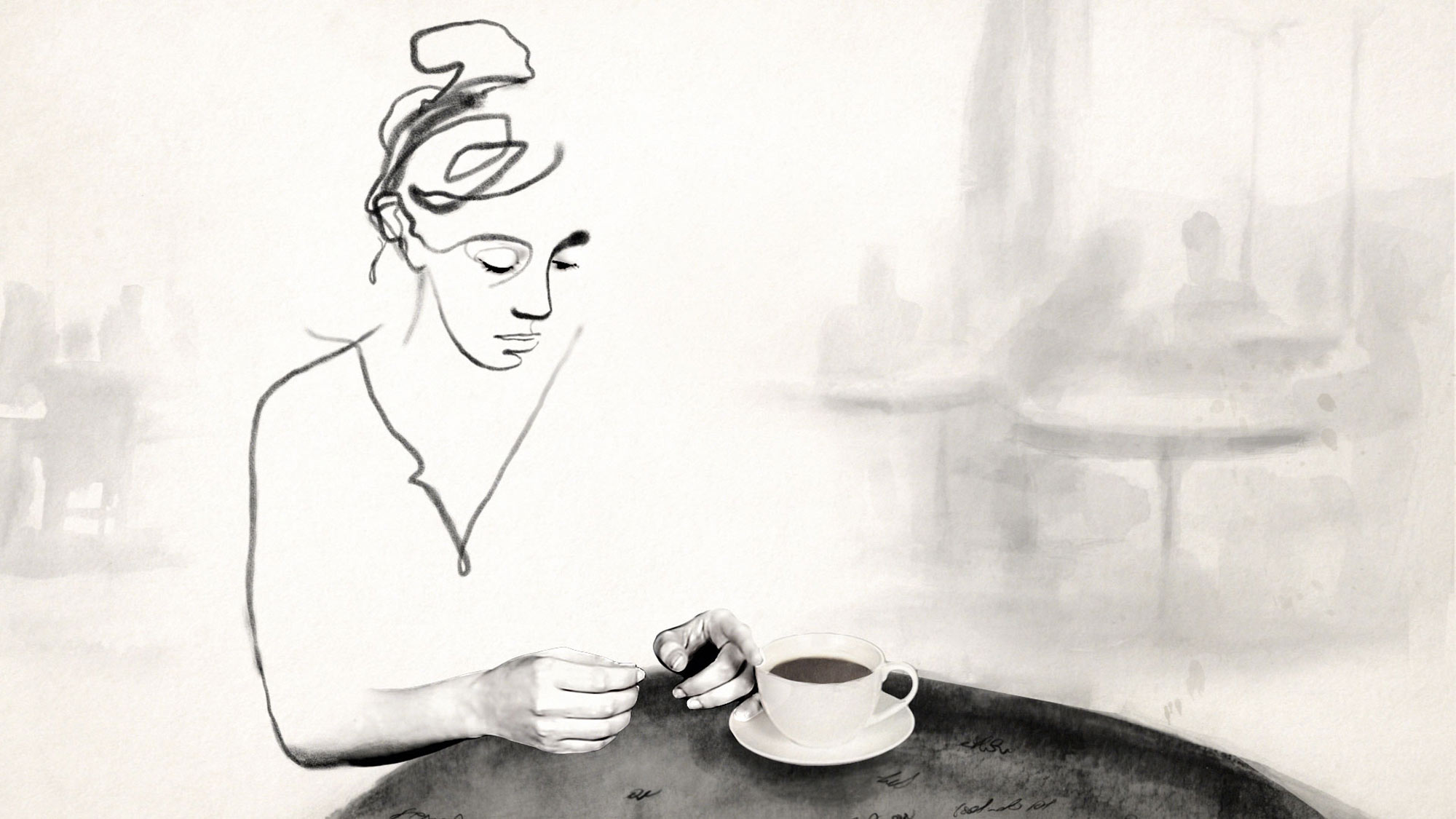 Unfolding in the imperfect space of memory and missed opportunities, Tal Kantor’s mixed media animation In Other Words, conveys the fragility of a father’s estranged relationship with his daughter, through the masterly use of fragmented visual techniques which combine ethereal animation with segmented live action performances. Tal returns to DN for an extensive look at the techniques, tools and thought processes which led to this captivating journey into inaction and regret.

In Other Words is a rending reflection on remorse and wasted opportunity that feels deeply authentic. What’s the origin of the film and your desire to make it?

I wanted to talk about communication, and miscommunication between people. This desire stemmed from a deeply personal issue in my life, but also from talks and interviews I had with people in the year leading up to the film. Remorse and regrets are an integral part of our lives. Remorse and obsessing on missed opportunities takes place in our memory, which is where the film takes place. Memory, and the act of remembrance, is something that fascinates me and which I explore in many of my works.

Remorse and regrets are an integral part of our lives.

I was also fascinated by the almost obsessive repetition that can go on in our heads, about some unresolved moment or incident, the ‘what if?’ question we all ask sometimes. The thought of what would have happened had I said something else, or done something different. This mental repetition hoping for a better result – can it really help or fix anything? Does it resolve or erase anything? Or maybe it’s completely meaningless?

Word’s clearly play a significant role here – from the title, to the repeated dialogue, to the discarded, unspoken fragments. As a visual artist do you see an inadequacy in words to communicate fully and honestly? In what ways did your thoughts on language shape your depiction of this estranged relationship?

Language would seem like the central tool in our inter-personal communication. Using consensual constructs – words, and the manner in which they connect – we share experiences and assume a shared world. But sometimes words cannot serve as substitutes for actions or the impact of a physical presence, and cannot bridge real-life experience gaps. Words can also lose their actual content, rendering them hollow, narrow, and inaccurate, and then we lose our trust in them.

For example, this feeling of regret over something we said or which we didn’t say quite right, and our obsession of reliving this moment in our head trying to find more suitable words. “I should have said this… I should have said that”. This hints at the inability of words to accurately convey our thoughts and emotions.

Language has always been a significant source of inspiration, creativity, and self-expression for me. Honestly, words always play a part in my creative process, even if the work ends up strictly visual. However, what interested me in this film was to focus on language’s limitations and impotence, and the words’ inability to bridge the gap between the two characters, thus making their estrangement ever the more present.

Also in the transition between the language of the film (Hebrew) and it’s translation – there is a limit. For example, the word “can” sounds like “sand” in Hebrew, and so a Hebrew-speaking viewer experiences in the film another meaning for this word. This is another example of how language can lose or change its meanings, and perhaps here too, in this interview, we might lose things because of how my brain thinks in Hebrew and has to transfer it to into English.

The film’s mixed media style impressively conveys both the incompleteness of their relationship and the shifting, fragmented nature of memory. How did you arrive at this visual treatment and how much did it evolve and mutate during production?

This is my first time working with materials in this manner. At first, I just looked for a language that would allow me to incorporate the media I work in – drawing, animation, photography, and writing. In this film, I wanted to find a visual connection between our inner world and bodies. I chose a visual technique that allowed me to fuse our familiar physical world with the shifting landscape of consciousness and memory.

I felt that this technique enabled me to present the fragile world in which the film takes place – a delicate, fluid realm of memory and remorse. The incompleteness of the characters and the world they inhabit is reminiscent of our own memory, as is their fragmented and inadequate relationship. The visual treatment and its related techniques developed organically while working on the film. They evolved and took shape in a manner that reflects my journey working on the film – understanding what is essential, and what needs to be discarded and erased.

What drove that distinction between the elements of the image which were defined and concrete vs the more ethereal fragments?

Memory is always selective and depends, among other things, on what caught our attention at that moment. Things outside our focus on tend to be more amorphous and blurred in our memory. Thus, a small and seemingly insignificant gesture etched in our memory, can tell a lot not only about the person who made it, but also about the person who saw him and remembered him that way.

For each character, I wanted to distill those elements that define it and form its essence, the dominant communicative organs it uses to express itself. This is part of what drove my choices of what gets shown more or less clearly in the film. Reduction of non-essential items in the environment allows the viewer to focus on what’s important and be able to gaze at it, thus mimicking a subjective sense of memory. This is also an approach I adopted from drawing practice – the choice of what to emphasize and what catches the eye.

You took on pretty much all the film’s production roles. Could you walk us through the production processes you used to create In Other Words? Were there any particularly challenging aspects to combining the live action and animated element?

It was a very intuitive process of exploring and discovering a language, form, and narrative. Therefore, many functions and roles in the production became intertwined and felt like a natural continuation of each other. For example, for me, directing the film was an inseparable part of designing its visual look; I saw them as one single unit in my mind, which needed to be brought out.

What interested me in this film was to focus on language’s limitations and impotence.

Both the original storyline and the character design changed drastically and were mostly edited during the process to match the film’s reductive focus. At first, I played with the technique: I filmed myself and used archive footage in where the physical gesture of the character was interesting and expressive. From these tests, I understood a lot about the characters in the film – how they would look, and the technique and method to organically integrate the animation with the video.

Then I filmed the actors, knowing in advance which elements would remain in video and which the animation would replace, so I was able to focus on directing the gestures and facial expressions I wanted. I then ‘erased’ the video digitally, leaving only the parts that would appear as live footage in the film. The animation itself is based on a quick drawing of the characters in each shot, according to which I then drew the animation frame by frame, corresponding to the remaining ‘erased’ video.

The challenge – other than adapting to the new workflow and technique which forced me to improvise up to the last second – was to find in each and every shot the most natural way to integrate the animation with the characters in the video: the drawings had to flow from the essence of each character’s movement, its emotional state, the camera angle, and the lighting. On the other hand, this approach allowed for creative freedom and spontaneity in the animation stage as well, instead of working based on pre-determined templates.

What can you tell us about your Holocaust-related short Letter to a Pig that’s currently in development?

Letter to a Pig is an animated short that will also deal with memory, but from a slightly different angle, exploring the transmission of (traumatic) memory from one generation to the next through the eyes of a young schoolgirl. Since this is a film that also deals with memory, it will be based on the technique I developed in In Other Words, and I wish to take it one step ahead because feel that I have not finished exploring and expressing everything I have in mind with it.

The film was awarded the Ciclic production prize in the Annecy Mifa Pitches, which is a residence in Ciclic, France for producing the film’s animation phase. It will be an Israeli-French co-production by The Hive studio and Miyu Productions.