Pulling the fashion film into the battleground arena of staunch political statement, Freeman Plat’s Fuck Stereotypes. Set Precedent. opens with a selection of Trump’s incendiary words of division and hits back with the defiant rhymes of Rome Castille, coupled with images of minorities bucking against stereotypes. We invited Director Bryan Dos Reis to tells us how he brought the brand’s socially conscious ethos to bear on today’s polarised America.

Through and through this production, even in the early stages, it was a very collaborative effort and that made it a fun and interesting project. Freeman Plat’s Founder & Designer, Jeremy Sallee is someone who is very socially conscious and the clothes clearly display that. The idea was always to do something that focused on the times and the state of the country and how it impacts us all. Taking that step from a fashion lookbook to a piece that may influence people to think about our country’s current state.

We wanted to separate the fashion film into two chapters while still remaining as one piece, beginning simply with the screen being split very much as our country feels to be today. The left side is monochrome (a re-enactment of Trump signing an executive order) we wanted to create something menacing, dark and silhouetted. The right side in color, we focus on the faces of minorities and disenfranchised people that Trump’s words aim to chop down.

The second chapter is meant to be a sign of hope, showing these minorities, using what many feels is the center of the universe, New York City as their runway. Where the first chapter was static and slow moving, the second was meant to have a much more rapid pace, more forward thinking. We loved the idea of hard pushes towards our subject tilting our perspective continuously and always pinning actors and models against backdrops that may feel like a juxtaposition to what stereotypes may say about that person’s race, religious beliefs, or creed. For example, and my favorite, having basketballs fall around a Muslim man on a basketball court.

The idea was always to do something that focused on the times and the state of the country and how it impacts us all.

The last scene featured several people walking away from the Trump Hotel wearing precedent shirts which came together better than planned originally. We were just going to have the cast walking away, but as they were putting on the shirts, random people were walking up asking if this was an anti-Trump thing and grabbed a shirt and wanted to be apart of it. Earlier that same day people were arrested at the Trump Tower for protesting. We could have had more people in the video but we were a bit worried that we would also get arrested. Also, the doormen working at the hotel looked like they wanted to quit and throw a shirt on, it was a cool moment. 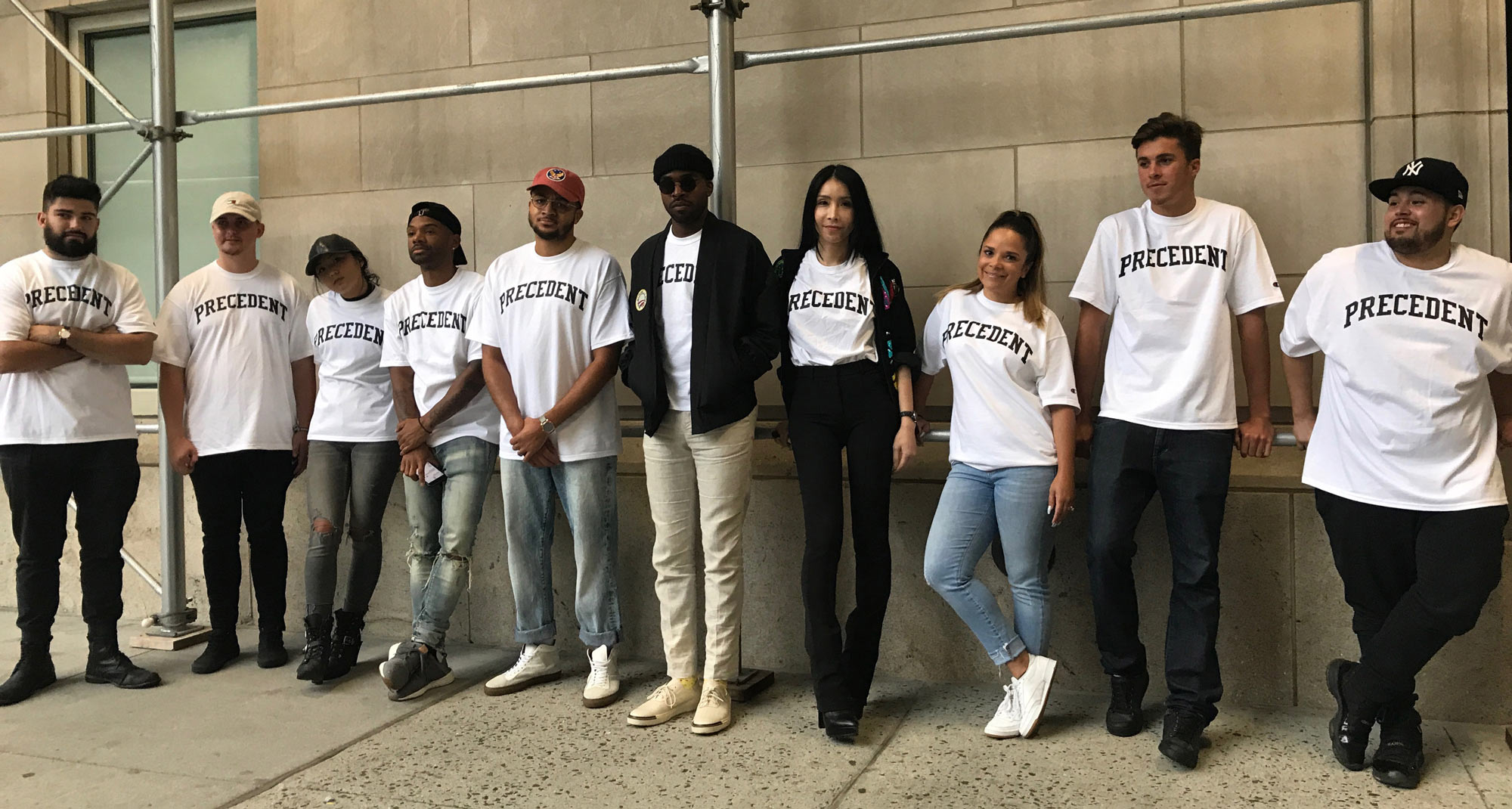 The score/track crafted by Rome Castille was special because it really narrated the story perfectly so our movement and rhythm cinematography-wise ramp with the song and that collaboration really elevated the shots and kept us locked in with the story.

The project took three days to shoot, and two days of running around NYC. We had a very small crew if you could even call it that, it was basically two dudes and a camera. Chasing light with Cinematographer, Dave McCabe Jr. was perfect, we got in an amazing grove switching off the camera, sharing roles, keeping each other fresh. Our styles differed and that made the pace, made it fun to look at, fun to edit and watch the end result. The last day was left for pick up shots and slow motion pin spinning.

We shot with the Red Weapon and pick up shots were achieved with the Sony FS700 with a convergent design. We were a barebones crew so our camera had to be light. We used vintage Zeiss ZF’S and my favorite lens the 11-16 Tokina. We also used a DJI Ronin M that we luckily and magically balance with the Red.

All in all, visuals are created to convey how people feel in an entertaining fashion and make them think far after the visuals have been displayed. I truly hope that we were able to do that and can continue to moving forward.