Traversing the path of iteration from feel-good romcom to “a meta-horror-comedy about machismo in film”, Nicholas Payne Santos’ festive themed short Holiday Fear, sees a man attempt to reclaim his manliness in the last act of a slasher film – all to impress the ‘Final Girl’. We spoke to Nicholas about flipping genre expectations and challenging masculinity in the snow.

What inspired you to cast your ‘Final Girl’ in the kick ass mould of Ripley, rather than conforming to horror conventions of a heroine who makes it through largely due to her unspoilt virtue?

I have always been a fan of badass heroines like Ripley in Alien. With Holiday Fear, I wanted to pay tribute to the strong female characters that slasher films of late 70s and early 80s created. These movies are often remembered as sexist, but they’re also responsible for creating the archetype of the ‘Final Girl’. The archetype has its problems — she is almost always a beautiful, white, young, straight, virgin, who is spared by the killer precisely because she represents this misogynist ideal. But the ‘Final Girl’ can also be appreciated as resilient, feminist renegades, who have successfully infiltrated male-dominated horror genres for decades. My protagonist embodies the ‘Final Girl’ while crudely challenging the antagonist’s (and viewers’) concept of masculinity.

My protagonist embodies the ‘Final Girl’ while crudely challenging the antagonist’s (and viewers’) concept of masculinity.

I originally set out to make a fun audience short. At the time, I was rewatching the Friday the 13th franchise and I became obsessed with the complexities of the ‘Final Girl’ horror staple. I also noticed a recurring scene throughout the franchise where Jason would seemingly be dead, leading the characters to approach his body, only for him to attack when they least expect it. It was the perfect moment to have Bruce attempt to impress Emily through an act of machismo with comedic and satisfying results.

Knowing that you only had a single day to shoot, how was the production structured to make sure you made the day? Did the extreme cold present any additional challenges?

Holiday Fear was shot in Falmouth, MA in January of 2017 on a shoestring budget with a skeleton crew. Since Producer Matthew John Lawrence, Director of Photography Kyle I. Kelley and I have all worked extensively together before, we were able to move at a fast pace with a shorthand to make our day. Going into the one day shoot, I had extensive rehearsals with the actors (Rebeca Robles, Eric Whitten) to make sure we had every beat down and wouldn’t be finding the scene in the cold weather. This efficiency gave us the time for one or two takes on set to play with the scene after we captured what we originally rehearsed.

We photographed the film with a RED Epic Dragon and Zeiss CP.2 lenses. We relied on natural daylight, utilizing reflectors and bounce boards for fill and close-ups. A Movi M15 was used for the push-ins and tracking shot. I had a strict shot list I didn’t want to deviate from, which allowed my Assistant Director Kristy Richman to keep a tight schedule.

The weather was the biggest production challenge. Luckily, it had snowed the day before adding beautiful production value, but the temperature had dropped to ten degrees. We would rehearse with the actors, send them in to warm up, set up the shot, bring them out to shoot and then send them back in while we discussed the next shot.

From the Director of Photography Kyle I. Kelley:
Santos and I have been working together for years, which means I know what he wants, and he trusts me when I suggest ideas. We’re almost always on the same page and can work together really efficiently. Good thing, because it was brutally cold on our shoot day, and a slower workflow might have killed me.

The biggest challenge on a shoot like this is always trying to maintain continuity. With our bare bones crew and limited equipment, our schedule had to revolve around the sun. There are a couple shots we had to save in the color correct because our actors were getting blasted and the only diffusion we had was a large 5-in-1 reflector with the surface removed. Luckily, it was a pretty simple shoot, and we planned it well enough that the limitations didn’t kill us.

It was also important to make sure the gear held up in the extreme cold. It was about ten degrees, if I remember correctly, which is challenging in a lot of ways, though at least that meant we didn’t have to worry about the RED’s fan kicking on. People who haven’t shot in the cold will often try to keep everything warm between shots — keeping the lenses inside and switching as needed, but that can be disastrous. Going from extreme cold to room temperature too quickly causes condensation to form, which can wreak havoc on lenses and other electronics. Luckily the RED is pretty hearty, and our CP.2s, follow focus, and wireless video transmitters all held up. 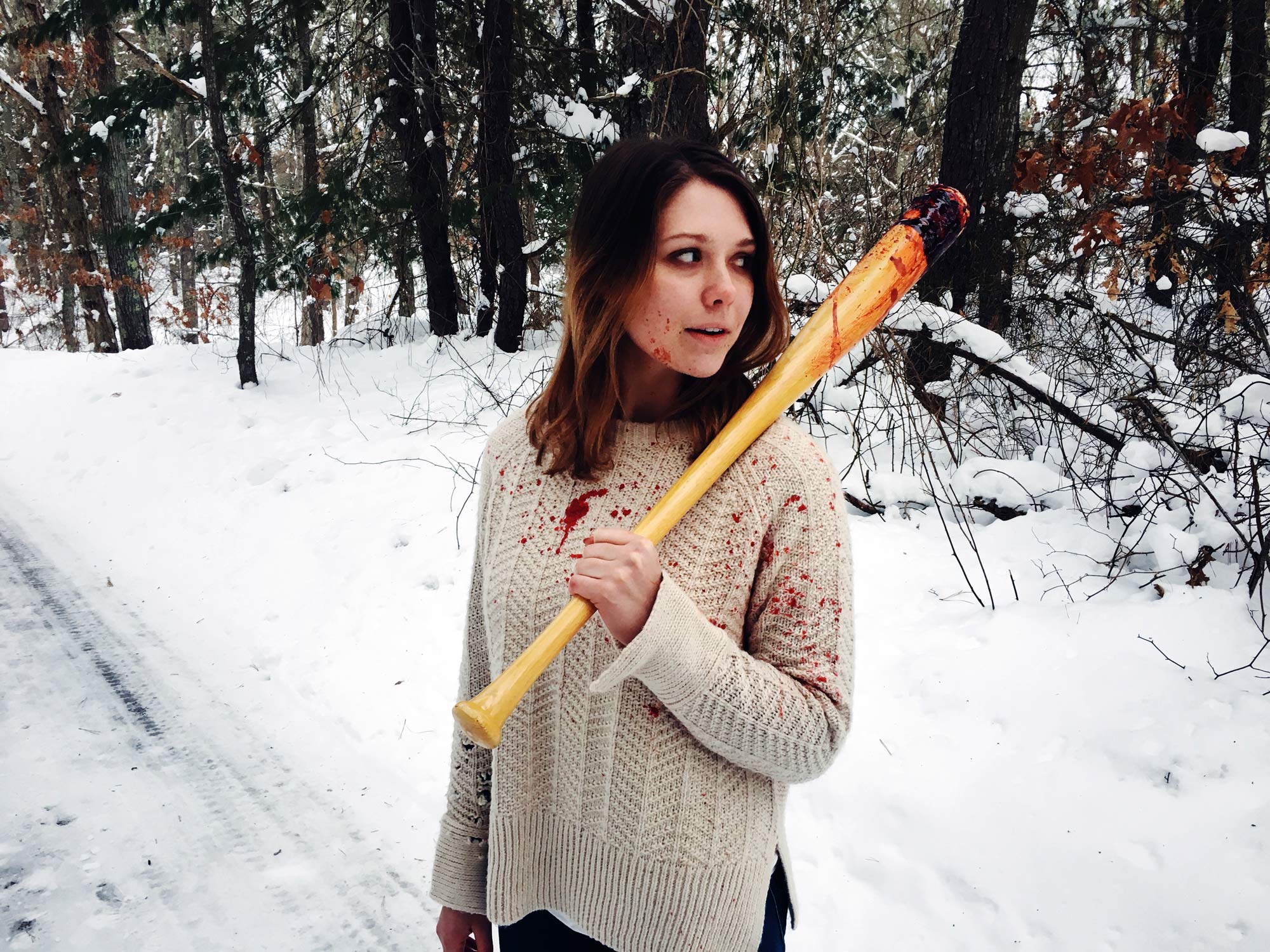 Much of Holiday Fear’s fun comes from the back and forth rhythm as Emily destroys Bruce’s machismo. Could you explain how you constructed that in the edit and how music and sound design contributed?

It was all through trial and error in both the rehearsal and editing process. I knew it had to be snappy in the performance, but also give us enough in between lines to work with in the edit. The reaction shots were really important to creating the rhythm. There were a few jokes that ended up on the cutting room floor because they slowed down the pacing. If it made us smile and laugh, we hoped it’d work for the audience.

If it made us smile and laugh, we hoped it’d work for the audience.

With the sound design and music, any addition had to add or heighten the story in some way. The Sound Designer Jordan Eusebio replaced and built the entire soundscape besides the on-set dialogue. Having worked together before, Jordan and I always look for moments we can up the ante or comedy with the addition or loss of sound effects. Composer Christopher Marti/Cosmic Monster was able to create an amazing score inspired by the music of John Carpenter but with a fun holiday twist. The Christmas take on classic synth horror soundtracks really brought the whole concept together.

How does your interest in subverting genre stereotypes present itself in the feature you’re currently developing, It Cuts Deep? Are there any other projects in the works we should look out for?

Where Holiday Fear was a play on Christmas slashers, It Cuts Deep explores vacation horror like The Evil Dead and The Shining. The feature similarly takes on genre stereotypes, challenging the ‘Final Girl’ trope and machismo in film, but also dives into my anxiety about children and marriage. It examines how a fear of commitment can dangerously manifest itself in a relationship, pushed to extreme and comedic heights. More information is available at here.

I have a new midnight, comedy short called Mother F**ker, which will be hitting the festival circuit this winter/spring. And I’m producing another horror-comedy feature titled Uncle Peckerhead from Matthew John Lawrence which is currently in development.