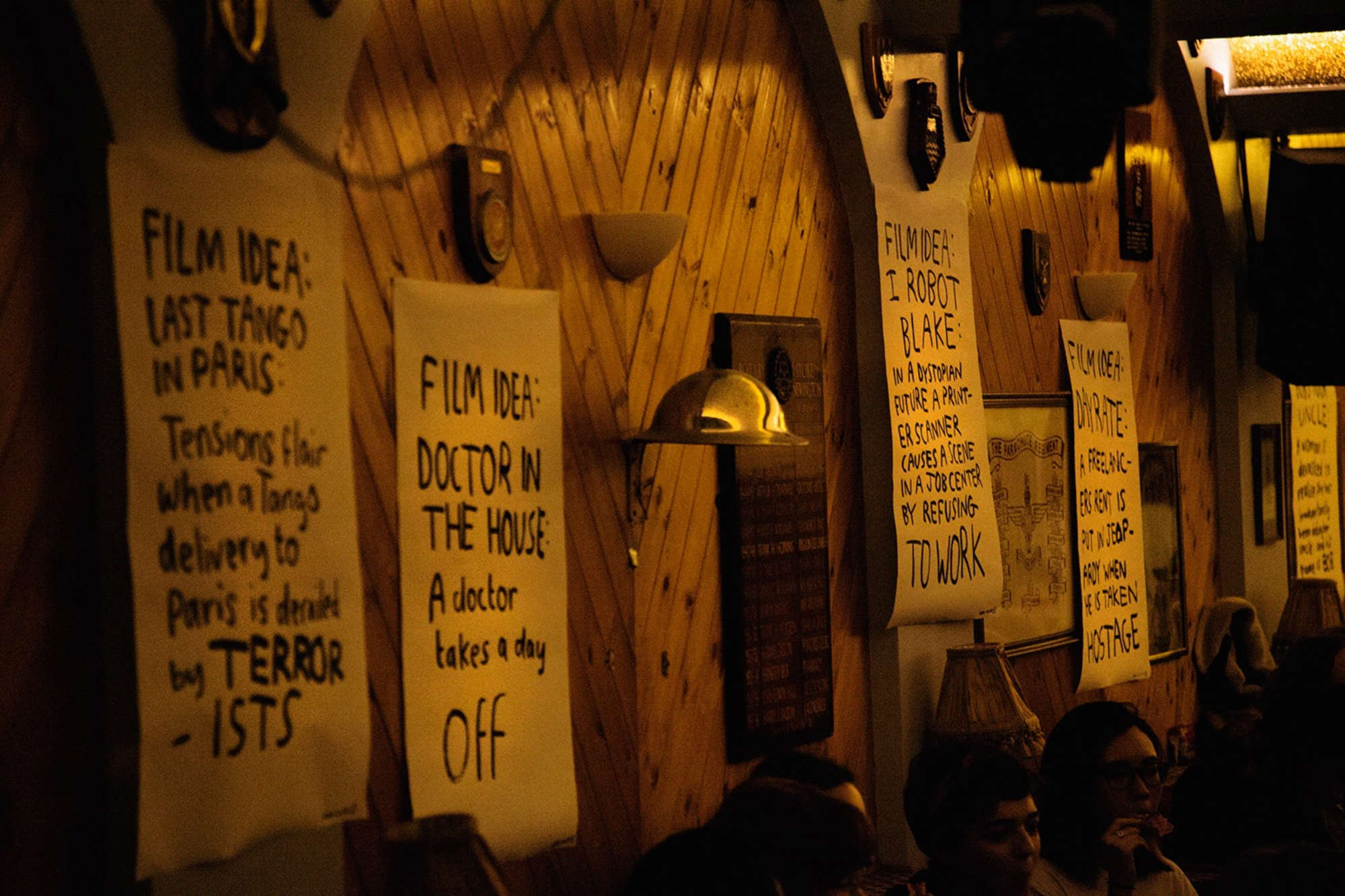 Demonstrating what can be achieved when a true passion for cinema is put into practical action, Christopher Rogers’ documentary unearths the roots of Steven T Hanley’s sustained passion for ‘off beat’ cinema and how he channelled that into popular East London film and music event, Deeper Into Movies. Clearly a subject that was bound to spark our interests here at Directors Notes, we decided to mark the film’s online premiere by inviting Chris to grab the reins in an interview with Steven about the ethos of the oft sold out night and the pleasures to be found in communal viewing experiences.

Christopher Rogers: What is your earliest childhood memory of film?

Steven T Hanley: Probably just in general my obsession with the video shop that was ten minutes from my house. If there was a new release out that I needed to see this place, unlike Blockbuster, would only have one or two copies. So I would just repeatedly ring the video shop again and again asking if it had been returned. Then getting deeper into, “Do they know the habits of this renter? Do they drop it off in the morning, are they lazy, are they overdue? Give it to me straight what’s the waiting list I’m looking at for this kind of thing.”

CR: Do you remember the first movie you saw in a cinema?

STH: I think the first film I saw in the cinema was Ewoks Battle of Endor. I can’t be sure. I remember seeing Crocodile Dundee with my parents. Actually, maybe it wasn’t even Crocodile Dundee it was the even worse sequel Crocodile Dundee 2. I wish it was something really cool. Like you know. I went to go see a Jean Luc Godard but I think it was probably Ewoks.

If you want to get a big crowd in Hackney, show something fucked up – and people will flock.

CR: Did you ever sneak into a movie you weren’t supposed to?

STH: Yes. When I was 11. I remember Batman was the first ever 12 that came out. I went with my mum but because I’m ridiculous, I also put on a baseball cap which had a Batman Logo. I dunno how it made me look older. Then I got a really big book from my brother’s bookshelf, a really arduous 200-page book and really smacked it down on the counter whilst paying for my ticket. To be like, “Reading Moby Dick here. Clearly over 12 years old!”

CR: I believe the movies you see as a kid ultimately shape you as a person. Can you recount your most traumatic film moment? A moment where you saw something you knew you weren’t supposed to?

STH: As a kid I was obsessed with Arnold Schwarznegger. Really into all his movies and The Terminator was the coolest. There’s that scene where his human body is breaking down and he has to pull out his fake eye to reveal his robot eye. And he’s really pale, sweaty and weird looking? Seeing someone pull out their eye – that just messed my brain up. When you haven’t seen anything that extreme or weird and you see something that hardcore and odd it’s really hard to process. So I would usually get to that point in the movie and just have to turn it off. I think after five attempts I made it through it. It’s weird I kept on going back to it even after it would fuck me up every time.

CR: Can you think of any reason why you like the films that you do?

STH: The reason I like all the movies I do is my brother. I had the cool older brother who was into really good shit. We’d be talking and he’d be like, “You haven’t seen Assault From Precinct 13? We need to go to the video shop now.” Video rentals were always a pound so we would literally drive down to the video shop, flick through, “Here you go, you need to watch that tonight.”

CR: How much older was he?

STH: 15 years. So it was good, we had that gap so we weren’t under each other’s feet. We got along and he had great taste. Shoe gaze bands, lots of grunge bands. John Carpenter, John Landis, John Hughes. Everything I think is cool, is probably based on all his influence.

CR: Talking about the film club, where does the name Deeper Into Movies come from?

STH: Deeper Into Movies is a Yo La Tengo song. Which originally I got into and only found out later is also a book by Pauline Kael the film critic. So I think that’s the good mix. The indie rock, DIY type thing and then deep academic film studies and criticism. Somehow that balance works out within my programming.

CR: Do you think you have a tendency to choose slightly darker films?

STH: No! I don’t get that. It is true that if you want to get a big crowd in Hackney, show something fucked up – and people will flock. I don’t know what it is. Enter the Void. They went crazy for that. Gummo, that was pretty dark they went crazy for that too. Holy Mountain was sold out two days in a row. So was Kuso by Flying Lotus. There’s definitely a taste for the extreme stuff.

CR: Tell me a little bit about Kuso, how did that come about?

STH: With the Kuso premiere. I get into a habit of if I see a film’s coming out that I wanna screen I just get obsessed with it. I’ll just contact everyone. I contacted the US distributor, Flying Lotus’ UK label Warp Records and then I found out it was coming to the Shudder Network which is like Netflix for horror movies. I just kept spamming their press team saying this was a great way to screen it at the venue, not just have it online. “We’ve screened stuff before, we’ll get Warp Records DJs in.” And yeah I just keep bugging people in the hope they will get back to me and not just block my emails!

CR: How did the idea come around for live music and scores at your screenings?

STH: The ideas for the live music and scores was pretty much that we’ll open doors at 7 start the screening at 8, we’re a club so we might as well bring in a DJ. I really like what NTS radio are doing in Dalston. They have really diverse and interesting programming, so they’re a big inspiration in terms of that idea for the films. I pick all the performers, from my favourite radio shows on NTS. NTS Loose Bones Radio and Perfect Sound Forever. Those guys are my favourites.

I’ve got a screen and there’s nothing dictating what I can show.

All my DJs and performers are huge music and film geeks, and really go to town on their homework and set list. Loose Bones had a one hour timeline and it will say “0, 0 intro, 1 minute 43, cue in Can. 4 minutes 4, Led Zeppelin – turn up at drum solo.” They have it mapped out to the hour. I said to them one night, “Shit we’re running late can you cover for me?” And they said, “No we’ve got 2 minutes 43 left of our set and that’s it.” That’s fucking amazing.

CR: Compared to other cinemas the Moth Club is far from ideal. Could you expand on why you don’t think that really matters?

STH: Yeah, it’s true the Moth Club is basically a community hall. It’s not a true cinema but this comes back to when I screened Kids. I read an interview with Leo Fitzpatrick who played Telly. Leo got into art dealing and started having a few DIY events in New York called Home Alone and Home Alone 2. In another interview he said that he just got all his friends’ art, found a really shitty small space, stuck art on the wall and invited all his friends. He said – you don’t need MOMA to have an exhibition. You don’t need a prestige high end gallery to show great works of art – you need four walls. That really sparked something with me. It’s the same with the venue. It is a small indie venue but I’ve got a screen and there’s nothing dictating what I can show. So fuck it why can’t I have a Jim Jarmusch retrospective? Why can’t I show classic European cinema?

CR: There is literally an Odeon and an Empire around the corner. Why do you think people are drawn here?

STH: Yeah there are two really big cinemas right round the corner. But for the price, I think my film choices are really good and these movies are not often shown on a big screen. People have really gotten behind getting here early for drinks and the DJ set. I guess I’m just offering something different, way cheaper and more exciting than the average blockbuster and superhero movie.

CR: Do you think there’s something to be said about everyone getting together and sharing this experience?

STH: It’s weird in a way I love the idea of everyone coming together to watch a movie. A lot of the nights are sold out and everyone’s having a good time together. But then there’s a Larry David part of me that loves a half empty cinema. I deliberately go to the cinema when it’s empty. Or pick a quiet time to go. But yeah mainly, people coming out to watch great movies on the big screen is the best part of it for me. Or people, who have heard about this movie. “I’ve read about it a lot, I haven’t seen it. I’ve got the chance!” That’s great.

CR: What do you think is next?

STH: We’ve got the biggest adventure yet we’re going to host a mini film festival. Everything is considered and then have a big day of screenings. So that will be good. I’m just relying on other people’s talent and submissions!

On Sunday, May 20th Deeper Into Movies is being hijacked by Insecure Men who will be screening their distressing The Kill Shop video for Ulster, followed by a DJ set and hand-picked movie for the night …the Australian nightmare cult classic Wake in Fright. You can find full details here.