It’s completely understandable that parents feel a primal urge to protect their offspring from the potential dangers and corruptions of the world, but does our bubble wrap society actually protect them or set them up for an experience-free lifetime of dependence? Presenting a situation that even the most intrepid of parents would blanch at, Bryan Campbell (who last joined us with music video Grown Man) returns to DN with a palpitation-inducing young boy’s solo trip to the rest stop from hell, in comedy shot Big Boy. I spoke to Bryan about his team’s epic defacement of a public toilet and how he harnessed the power of childhood innocence for this cringe-inducing bathroom visit.

What were the elements of David Larson’s script that made you want to direct Big Boy? Did you have to pull back on any of the unsavoury encounters in the restroom for fear of pushing the concept a little too far?

I had a strong visceral reaction to Big Boy the first time I read it. It was equal parts funny, suspenseful, and dark – which I really liked. When I read the script I had just finished another film called, The Bond which was a heavier drama and I was ready for something with a bit more levity. It was a delicate balance bringing the story to life. There are some very unsettling situations that Dustin, the young hero of the film, encounters BUT he doesn’t know to be worried – so he isn’t. The script brilliantly plays off societal fears about race, homelessness, and homophobia and shows those fears to be unfounded.

Hopefully viewers recognize that the reason Dustin survives his descent into the hellish bathroom is because he has not had those fears instilled in him yet. Each character he meets has an expectation of how Dustin will react to them and he always does the unexpected. It’s worth noting here that Dustin does not have a character arch. He is the same person at the end that he was in the beginning. What makes the film work is that Dustin is the agent that enables the other characters in the film to change. 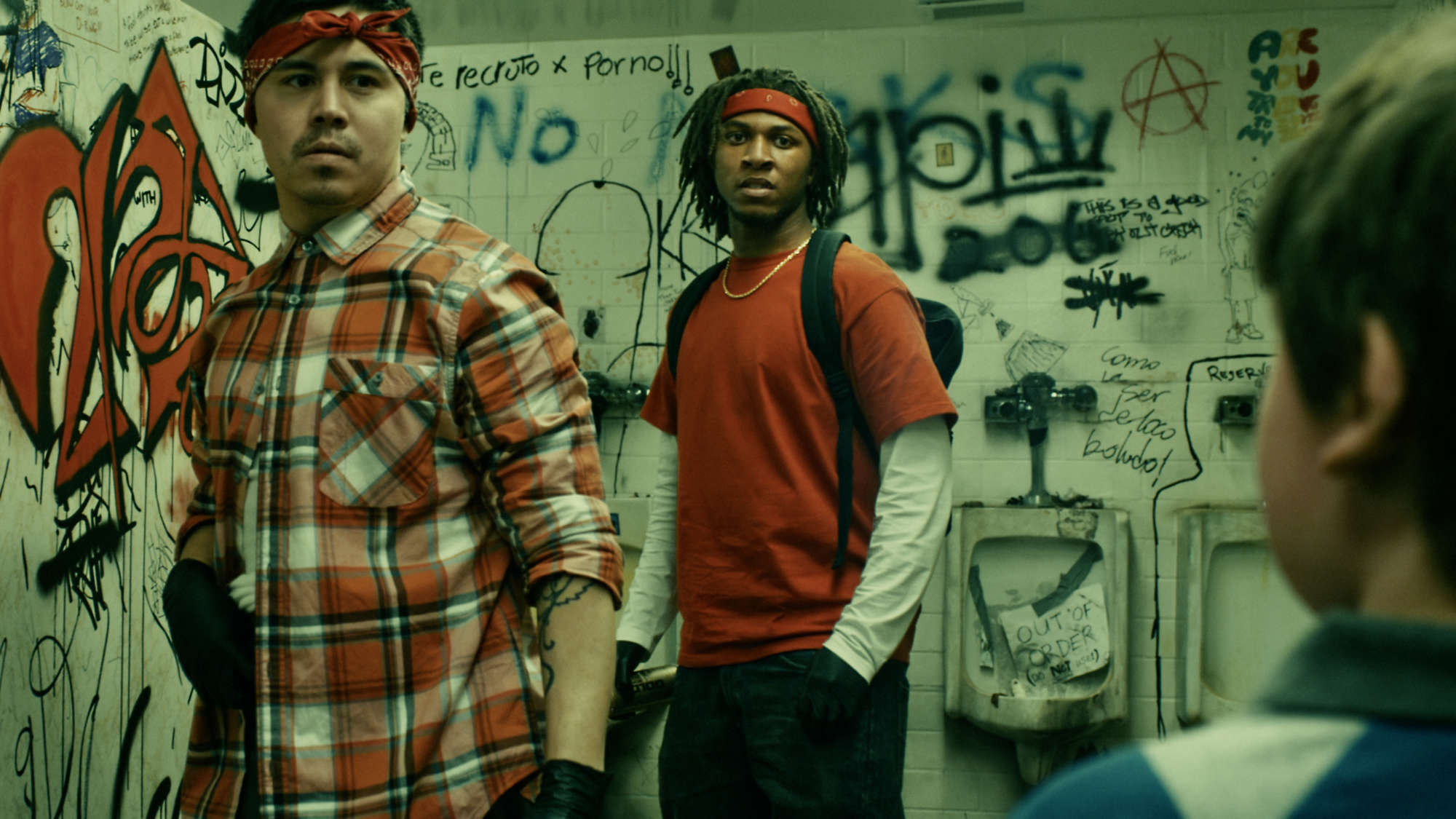 As for the specifics of each “unsavory encounter”, the film stays very true to the script – I did not pull back at all from what Dave wrote and I tried to push everything further where it felt appropriate. Looking back, I wish I pushed the encounter with the gang members further. One of them had a gun in their waistband that he goes for. Because the action is really quick and I didn’t focus on it, audiences often miss it.

The role of Dustin required a young actor who could convey a completely wide-eyed obliviousness to his surroundings. Where did you find Tyler Saum and was it tricky to convince his parents of the innocent spirit of the film despite its locale/content?

I was my own casting director on this film and I found Tyler though one of the agencies in town. I brought him in for an audition and it was clear he was the one as soon as we began. He is a sweet person and he has that wide-eyed quality but he is also very sharp-witted and has a strong grasp of the language of acting. I knew I could work with him to bring out the performance the film required. His parents were great to work with as well. I made sure to talk to them about my vision for the film and address any concerns they had early on. I was pleasantly surprised to find out that they saw the humor in the script and were fully on board.

There are some very unsettling situations that Dustin, the young hero of the film, encounters BUT he doesn’t know to be worried – so he isn’t.

Hands down this is the worst public toilet I’ve seen on screen since Trainspotting. I’m more than little hesitant to ask what went into creating this hellhole of a rest stop, especially during the research phase?

I want to start by saying that Kristen Bonnalie was my production designer and she is a mad genius. At the beginning of preproduction we created private Pinterest boards and I started populating them with images of New York subways trains and tunnels from the 1980s. There was a really aggressive and gritty/grimy feel to NYC subways and the style of the graffiti at that time and I wanted the bathroom to have that same aggressive texture. At the same time, Kristen was taking pictures of graffiti while she was out and about and posting those to the Pinterest boards. She also pulled a number of images of just filthy, nasty public restrooms to make sure that we were on the same page about how far to push the gross factor.

We chose to shoot in a bathroom at a local community college but this particular location posed a number of challenges, namely, we were not allowed to paint or put graffiti on any walls. Kristen spent over a month in research and development and used her own home as a testing ground. She applied every brand of spray paint on multiple surface types to determine what was going to work for us and what wasn’t. In the end, we used contact paper to protect the walls and stalls in the bathroom and then we used water-soluble paints on top of that as a fail safe incase anything were to get through the contact paper.

Prior to today’s Vimeo release Big Boy has been available to watch online via Amazon Prime, what was the process of making the short available on the streaming giant? Do you feel it was a worthwhile experience?

After Big Boy had its premiere at the 2015 Tribeca Film Festival I was courted by a few distributors. I had two options at that point: take a distribution deal and wait three years before I could release it to the public online OR just go straight to a free online release. I chose a distribution deal with Magnet Film.

Now, three years later, the question I’ve asked myself is whether taking the distribution deal was a worthwhile experience. My short answer is yes. Magnet Film was great to work with and handled all of the film’s releases. Big Boy played on several pay-per-view sites across Europe including HBO Europe. That’s a cool feather in my cap and had I done an online release that would not have happened but it reaped almost no financial reward and I have no metrics to assess how many people watched the film. If I do another short film and I was presented with a similar opportunity I would most likely post the film for free online after the festival run.

The film makes a clear comment about the power of childhood innocence, which is perhaps something that’s been lost in our overprotective modern age. Do you feel we’ve gone too far in the coddling of children and limiting their opportunities of parent-free adventure and discovery?

Contrary to what is happening in schools right now across the US, this is one of the safest times in the history of America to be a child. I don’t know if that is a result of coddling and limiting parent-free adventure or something else. Before the cell phone, parents had to come to terms with the fact that their children could be unreachable upon leaving the house. Since then, that expectation has changed. As a society, we continued to grow less comfortable with the idea that we don’t know where someone is. I think this feeds into the helicopter parent behavior – which, at its core, is a response to fear. Fear is not a bad thing. It’s a very helpful tool but it needs to be managed because our fears are sometimes disproportionate to the situation. My hope is to see fewer parenting decisions made out of fear.

Do you and David have any plans to pool your talents again in the near future?

Currently Dave and I don’t have any projects we’re working on together but we still meet up once a week for breakfast. Dave has a TV show called Bar Flies he is shopping down in LA and I am bouncing between the two scripts I’m writing and commercial directing. My hope is to get a first draft done on one of the scripts in the next couple months.