There’s something inherent in the concept of ‘art’ that regardless of its form, invites – if not demands – us to engage at a level which transcends the work when viewed in another setting. This inclination to consider the meanings of pieces presented in an art context is what underlies Scott Geersen’s potent Humankind title sequence for TEDxSydney 2018 and in so doing, carries the film’s themes well beyond its running time. Finding our thoughts returning to this CGI gallery after sharing it a couple weeks ago, we asked Scott to explain how on earth he met the weighty challenge of summing up the good and the bad of our species in under two minutes.

The idea of creating a film that said something about our society and culture was something we had wanted to do for a long time. We’ve done a lot of titles and a lot of ads, but were really feeling a desire to use our skills to say something beyond a single event, film, TV show, or commercial. The TEDx opening titles turned out to be the perfect opportunity for this. Here we had the chance to make something purposeful, aligned with the fantastic values of TEDx, that would not only satisfy a brief for a title sequence but hopefully also reach beyond that purpose.

The brief was just one word. For 2018: “Humankind”. The wide-open nature of the brief turned out to be the most difficult part of the project – the topic is enormous! Where should we begin, what should we include and what would be left out? We looked at a ton of references – from pieces that smash-cut a million years of science and evolution into a one-minute montage, to pieces that focused on a single event, person, or emotion as a microcosm of humanity.

In the end the answer turned out to be a two-part attack. Part one was to link to the educational aspect of TED, and we did this by imagining TED as a museum or gallery filled with sculptures as statements on humankind. There was an opportunity here to hijack our conception of what sort of sculptures we expected to see in such a space – so part two was to decide exactly what to install within the rooms…also a difficult choice.

The wide-open nature of the brief turned out to be the most difficult part of the project.

We narrowed this down by listing all the topics and ideas of importance to humankind through history, mixing them up, jamming them together, seeing what would make an interesting juxtaposition or combination, or what would resonate with people. This was how we ended up with a scene like the school girls learning about robotics, with references to tech, education, religion, feminism and equality. We wanted to touch on a variety of topics with sensitivity and respect, but presented without commentary (as most art often is), so that the audience could discuss.

Some concepts didn’t need a lot of remixing. Depicting a school shooting was a risk, but also one of the first sculptures we knew we wanted to make. The insanity of the shootings that continue to occur is something we all feel strongly about (and most of us have young kids) and a clear example of one of the negative aspects of Humanity that have to be confronted – and remembered. To summarise as we did in the treatment:

The TxS18 titles will cinematically explore the past, present, and future of HUMANKIND, through tactile and dimensional renditions of the human figure, designed to illustrate the best and worst of ourselves.

All the scenes used the human form, referenced modern issues, and were presented with mostly traditional or classical techniques, as another layer to the remix of past and present. Ultimately there were more scenarios we wish we could have built and would love to revisit at some point. 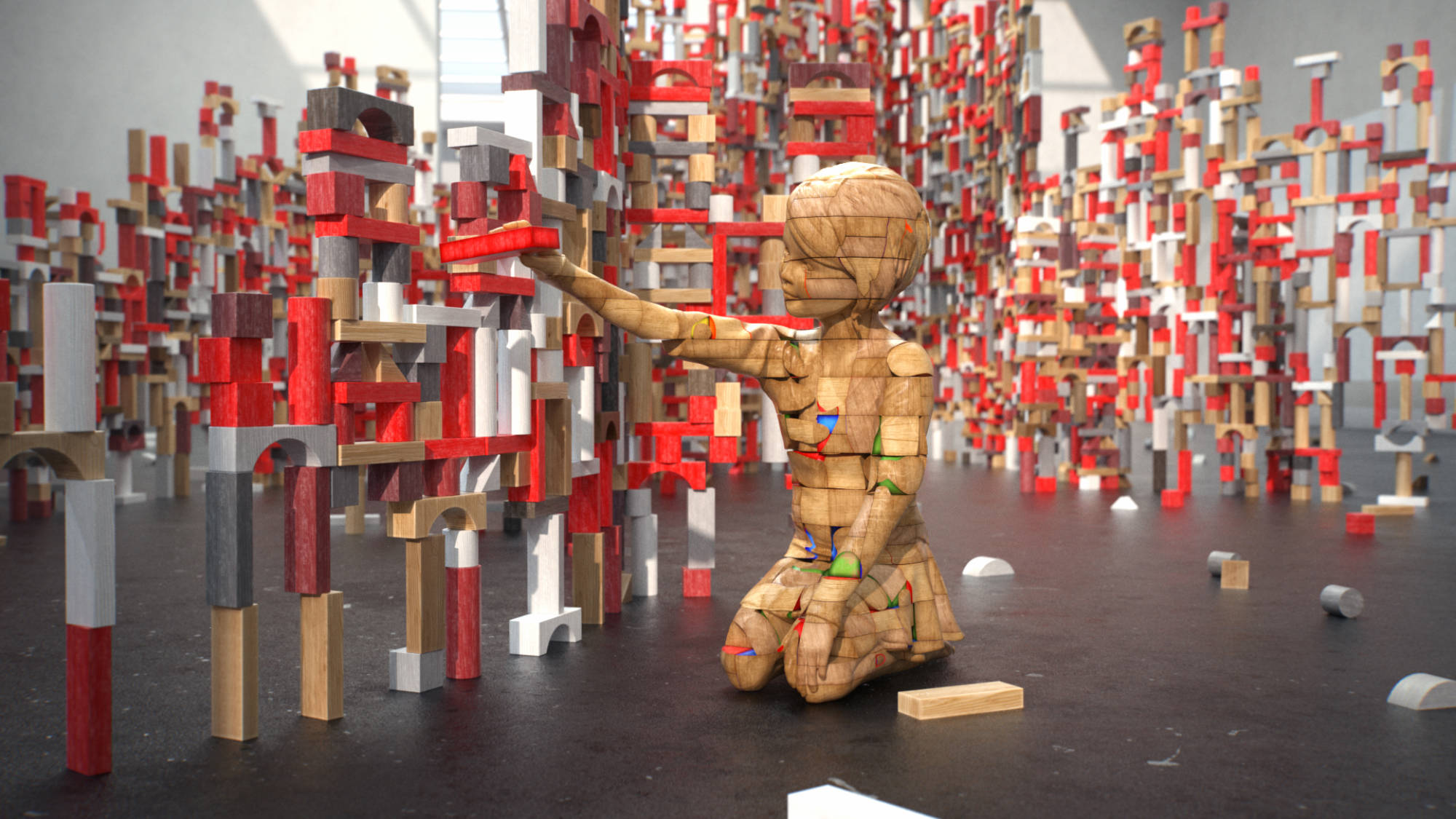 We aimed for a balance of positive and negative aspects of Humankind, as that’s the reality of the world we live in. Love, death, war, learning and inventiveness, history and technology. We approached all of this with seriousness and honesty, and I think in the end most people are coming away from this as intended, and in the same spirit as they depart a TEDx event – with a feeling of hope for a better Humankind after a hard look at our current position.

Depicting a school shooting was a risk, but also one of the first sculptures we knew we wanted to make.

Our process for this involved a long lead time in which to develop the ideas in discussion with TxS. We spent a good amount of time up-front building out the sculptures, then their environments, then linking these environments with halls and travelling shots to create the sense of progression through the museum. Shots were mostly planned according to boards planned out as part of the process of getting sign-off from TEDx, but quite a few changed along the way depending on how the sculptures developed, and we allowed this to be a fluid process.

The team is a collective of amazing artists, all of them incredibly skilled in multiple areas and putting to use the full range of these. After I built out the sculptures and sets, Joe Morris worked out the edit in Sydney. Rich Nosworthy in NZ and Ezequiel Grand in Argentina sculpted additional details on the base meshes with Zbrush and Houdini. Rich and Ezequiel along with Rory McLean in Queensland Australia, and Jeff Briant in Canada, all contributed to some incredible lighting and texturing throughout.

Given the weight we wanted this to carry, finding the right composer was something on our minds from the moment we started work. As it turns out, we only had to send one email. This was to John Black from CypherAudio. We had first heard John’s work many years ago at an event here in Australia (Pausefest). That John was interested was one of the most exciting moments of the project for all of us! What John created fit so well to the scenes and edit, and added so much more, that without fail everyone we showed in the studio and at TEDx as work-in-progress left with goosebumps.