Drawing on the deliciously dark images conjured up by changeling folklore stories, Dublin based Director, Animator and Illustrator Joe Loftus’ short film Wooden child is a decidedly creepy journey into guilt and consequence perfect for the Halloween season. Watch it below, after which we speak to Joe about expressing his love of horror across the mediums of comics and animation and how each form feeds into the other.

Alongside filmmaking you also create comics, aside from the obvious ‘drawn media’ similarities, how do you feel comics inform your animation work? How much of a cross-pollination of ideas exists between these two creative avenues for you?

I think comics really help me get ideas out fast, I love short film but it can take very long from the idea stage to final animation. I find a lot of ideas build up while working on a short film so it’s good to get them out without putting them on the long list for the next film project. I’ve been exploring horror a lot over the last year so it’s been great to try out horror in animation and comics to see what I can do with it.

I learned a lot of interesting stuff in Wooden child that I went on to explore in the comic series Dark Down There. I view these two projects as the same exploration of horror so they definitely cross each other in terms of style and what scares me.

Where did the idea for this creepy journey into guilt come from?

Wooden child is my second independent short film, it started off with the idea of a child on the road hit by a car, a traumatic moment that gets worse when the child appears to be part of a creepy ceremony, I wrote the idea down in a notebook then forgot about it. I came back to the notebook a year later and the idea grabbed me again but I wanted to push it further. I had just finished the festival run of my first film Boy Bear and Robot so it was the perfect time to start a new idea.

I’ve always loved horror so I really wanted to try my hand at it, I love Stephen King and David Lynch so I really wanted to take this somewhere unusual but also route the concept in folklore mainly the concept of the changeling. I also love the idea of an unreliable narrator, so the audience need to piece together what’s actually real here. Hopefully, it worked and the viewer can feel the sense of things being very wrong here throughout.

How long did it take to make from start to finish?

I set a deadline of 6 months of production and I designed the film around making that possible, so a lot of the work would be creating atmosphere through sound and the use of the old recording of ‘in the pines’ by Clayton Mc Michen. I also had fantastic help early on from the film’s Sound Designer Sarah Walsh – she really helped build the creepiness through the SFX and score. 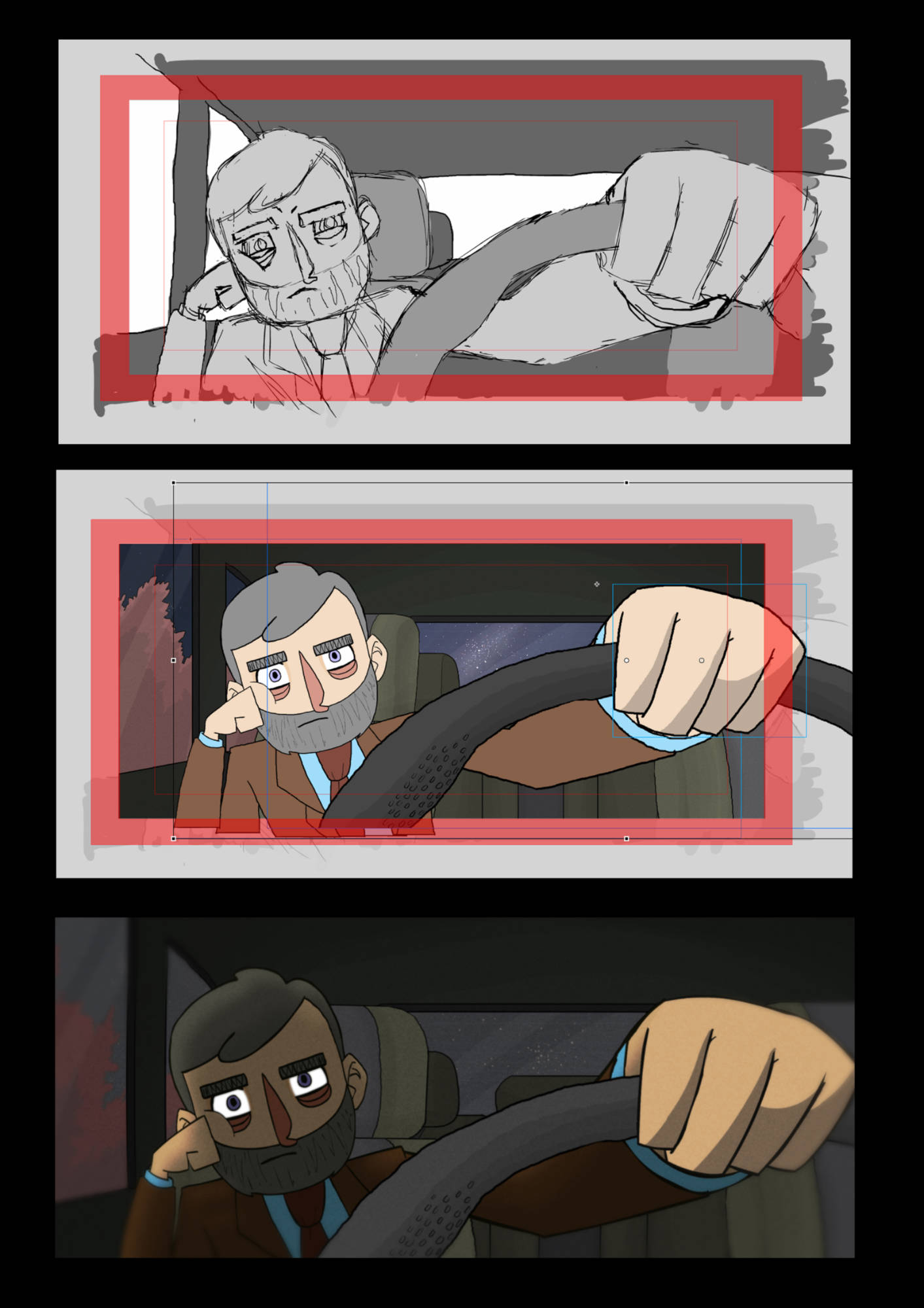 Wooden child employs a clean, defined style of animation, were there particular sources of inspiration behind that look?

I was really inspired by the Cartoon Network series Over the Garden Wall. I really love the clean simplistic style used to communicate some pretty huge and scary ideas, I definitely recommend it if you haven’t seen it. I’ve also worked in TV animation for the past few years so I’ve learned a lot from the techniques used to create the shows I’ve worked on.

What were the tools/software and animation processes you used to create the film?

For this film, I storyboarded and animated in Adobe Flash, I then composited and lit the shots in After Effects to add depth and make it feel like it belongs in its own world. For my last two films I’ve approached them shot by shot, I storyboard the whole thing then go straight to animation and time it out there, I then put the film together shot by shot and time it out as I go, I find it’s the most satisfying way to work when I’m on a project on my own that can go on for months or sometimes over a year – each new shot feels like it changes the previous and that’s really exciting as even I don’t know the end result until I see it.

By the end of a film project you learn so much that you would have loved to have known from the start.

You’ve said that despite still being proud of Wooden child it didn’t work out exactly as you’d hoped. What’s the gap that exists between the conception and realisation of the film?

I think the initial idea is always this huge exciting spark that just crosses your brain, I had that with this film and then gradually carving it into reality did leave out elements that were in that unspoken idea. There were ideas I wanted to follow like the bear communicating with the man in a more direct way that I feel in retrospect I could have explored more but that would have the side effect of making the film less clear.

In the end, I wanted the film to be understood in general but with elements that leave the viewer with questions as to what’s real here. It’s not to say that I feel Wooden child doesn’t work for me, it’s just that I feel by the end of a film project you learn so much that you would have loved to have known from the start and would love to be able to apply in retrospect, but that’s just filmmaking.

What new projects do you have on the horizon?

I always have a new personal project on the horizon, I’m hoping to start a new short film very soon so please keep an eye out for it!