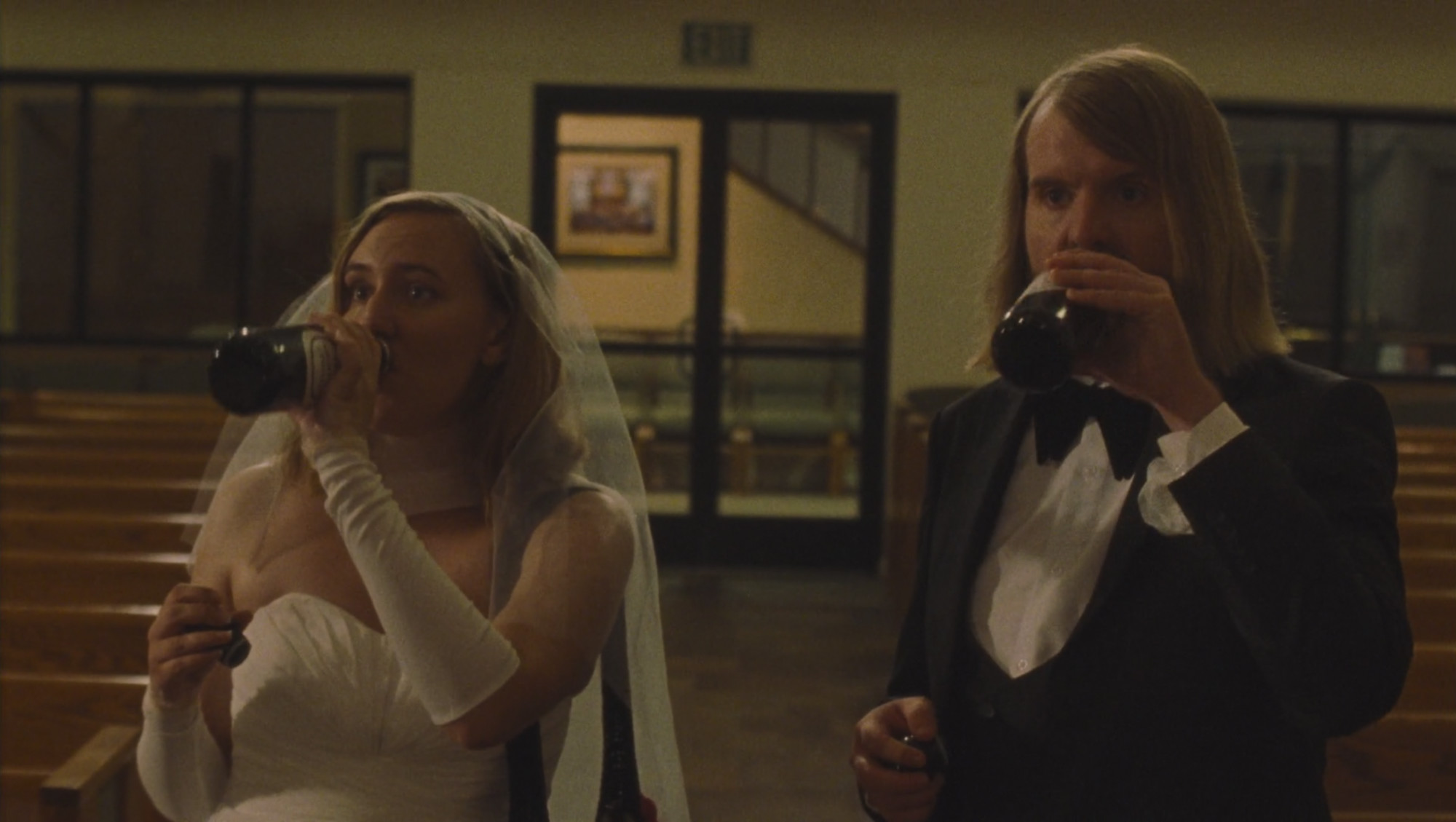 You may not think that a film with the strapline, “Kim was literally born wearing a wedding dress” and presented through a TV news conceit could hold much in the way of sincere insight into the human condition, and yet LA Director Christian Cerezo’s A Bride & A Groom surpasses the bounds of its absurd premise to convey the pathos of loneliness and the desperate, ill-advised actions it can push us to. Making its online premiere on Directors Notes today, we asked Christian to share how his personal experiences informed the film’s deeper melancholy and why 16mm was the obvious format for A Bride & A Groom’s matrimonial aesthetics.

At first, honestly, I just wanted to write something that wouldn’t cost a fortune to make. I knew I wanted to make a film set in a church because my family has close ties with one in my hometown, so I knew I wouldn’t be terrified of asking that church if we could film there. I wasn’t completely sure that they’d give us permission, but they ended up being okay with it.

So that ended up being the location, and again, since I was trying to make something cheap, I wanted to write something with basically only two characters in it. The first image that came to my mind when I thought of two people alone in a church was of a bride and a groom. As for the high-concept premise of the story, I wish I could tell you how that arrived in my head; I honestly don’t know. But when I thought of it, I immediately knew that’s what the film was. I am being completely earnest when I say this: dumb ideas really speak to me. And the opportunity to make something sincere out of something dumb has never not been exciting to me. 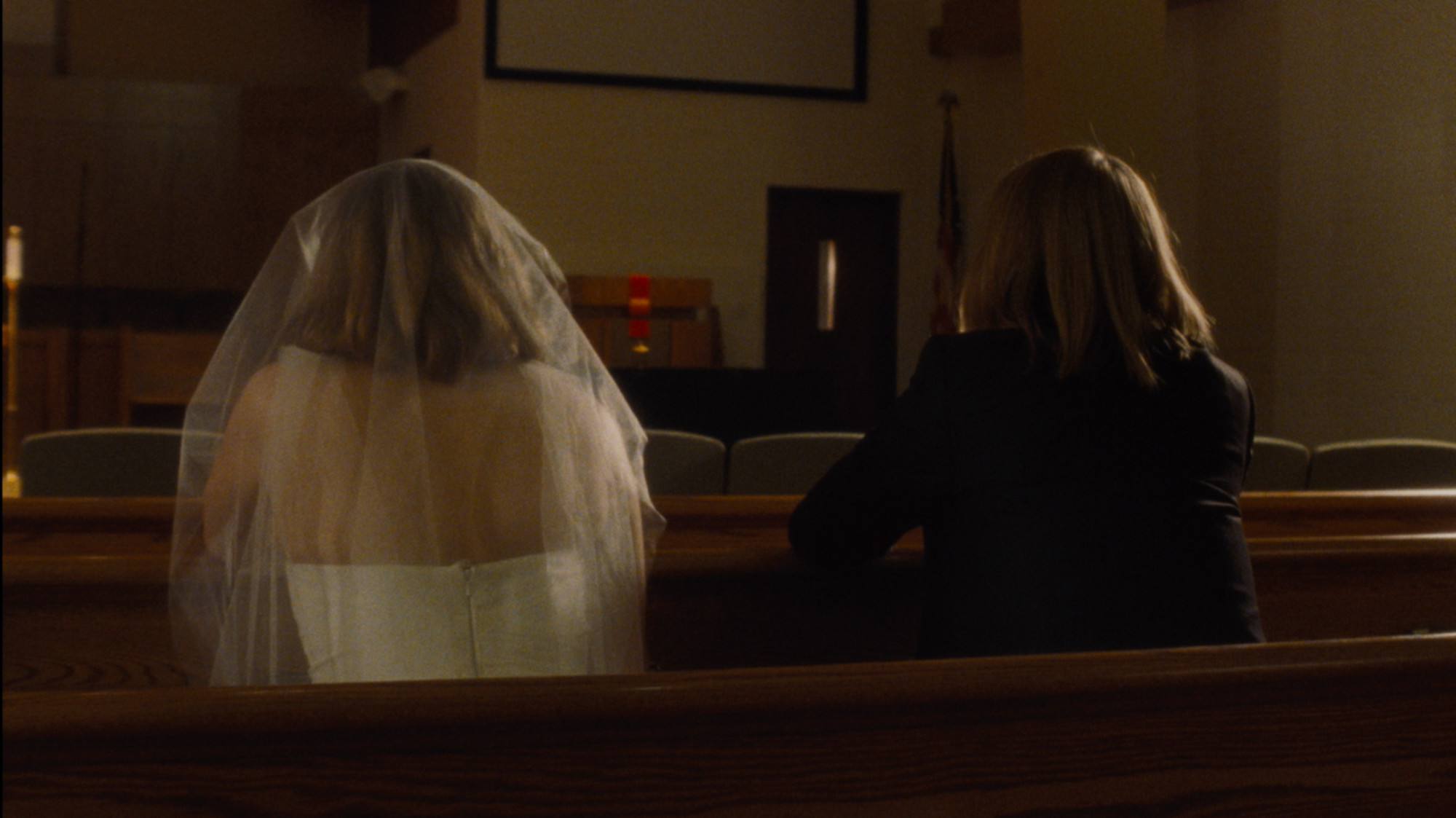 We shot it on 16mm. (Here’s a fun, probably-obvious fact: the film roll-outs used in the short are the actual roll-outs of the film we used.) In my opinion, if you want to film a bride and a groom alone in a church, there is no way to film it other than on 16mm. The 16mm “look” lends itself to the romantic, nostalgic tone that I was looking for. Sara Ross-Samko (the cinematographer) and I even agreed that we’d be so happy if we could convince the viewer that this film was made in the 70s.

The opportunity to make something sincere out of something dumb has never not been exciting to me.

For example, I really love John Cassavetes’ films, as well as films like The Panic in Needle Park. I just wanted a grounded, sensitive, heartbreaking story about people and I think the 70s was the era that perfected that sort of genre. I wanted to make a film that would feel right at home with those kinds of films. Some other films I referenced to various members of the cast/crew were: The Squid and the Whale, Blue is the Warmest Color, Blue Valentine, Call Me By Your Name, and A Ghost Story.

I also need to say: Haley Hepworth (the bride) and DC Pierson (the groom) both thought so deeply about the story and brought so many of their own ideas to the film. They’re such a huge part of what makes it work. (Fun fact #2: They’re a real-life couple!) The scene in which the two characters touch each other, in my opinion, was not necessarily working as well as it could’ve until I saw Haley and DC act it out. On the page, I feel like it’s kind of difficult to imagine two actual human beings behaving like that. But Haley and DC found a way to make it work, which is just another way of saying they found a way to make it feel real.

The whole process took about five months. It was a difficult film to make for a lot of reasons, but it also happens to be the exact kind of film that I want to continue to make.

A Bride & A Groom is one of the many great projects shared with the Directors Notes Programmers through our submissions process. If you’d like to join them submit your film.