Anyone who’s set off on the path of artistic creation knows that road is beset with anxiety, frustration, and fear. Obstacles which, no matter how daunting, must be grappled with if we are to create anything of worth. A tacit acknowledgement of mental health issues such as anxiety and depression, Canadian filmmaker Adrian Vieni’s portrait short Prōˌses, steps into the maelstrom of artist Dina Roudman’s unfiltered thoughts, as she fights a battle of self. Making its online premiere today on Directors Notes, we speak to Adrian about conveying the struggle of self-doubt and second-guessing, whilst capturing the integral role these feelings play in the act of creation.

What kicked off this introspective reflection on the act of artistic creation?

The film came together after some initial talks between myself and model/visual artist Dina Roudman, who stars in the film, back in August. She was having her first solo exhibition for her paintings in September and wanted to have a film accompany her paintings as part of the show. Her show also called Prōˌses, focused on mental health awareness and the process of an artist who struggles with mental health. I immediately jumped at the opportunity, as I had been itching to make something narrative for a while, and had never taken a stab at writing dialogue before.

The idea was to visualize the internal dialogue that happens as part of creating any form of art.

After several chats about what we could make, we crafted a script that was dialogue based but written for only one actor. The idea was to visualize the internal dialogue that happens as part of creating any form of art and present it in a somewhat abstract and poetic way. The film morphed during production a bit, as what we were going for at first didn’t feel like it was working. With some creative input from our wonderful DP Kris Bonnell, the film shifted from featuring Dina talking to another version of herself on camera, into what it is now – more of a monologue.

Prōˌses predominantly captures Dina through the use of close ups, often filling the frame with portions of her body. How did the film’s visual style evolve?

From the very start, we set out to make something that was highly personal and very intimate. In our early stages of developing the short, we had set out to make something a little bit more narrative with more of a classic cross-shooting style, but it felt impersonal and forced. As the narrative shifted to more of a monologue than a dialogue, the way we chose to capture it shifted as well. The idea is that we’re living in the artist’s mind, seeing and feeling things the way they do. The location was never as important as what the experience was, so it became secondary to the artist. We felt that in order to really focus on their feelings, and feel what they are feeling, our shots needed to remain very close and intimate.

Could you tell us more about the shoot?

We shot the film in one day in my home in Toronto, on a shoestring budget of a little over $1,000. I self-produced the film out of necessity, but it wouldn’t have been possible without the incredible crew who donated their time: DP Kris Bonnell, art director Robin Clason, AC Scott Watson, grip Neil Munro, gaffer Cliff Ramnauth and sound recordist Ryan Yusep. On the post side, Chris Deo came on to edit the film, after scrapping a few versions that I was working on myself. Clinton Homuth at AlterEgo was kind enough to grade the film for us, and Chris Robison at Farmhouse Creative Labs did us a big favour for sound design. The original score really tied it all together, which was composed by Jason Couse of Toronto band The Darcys. 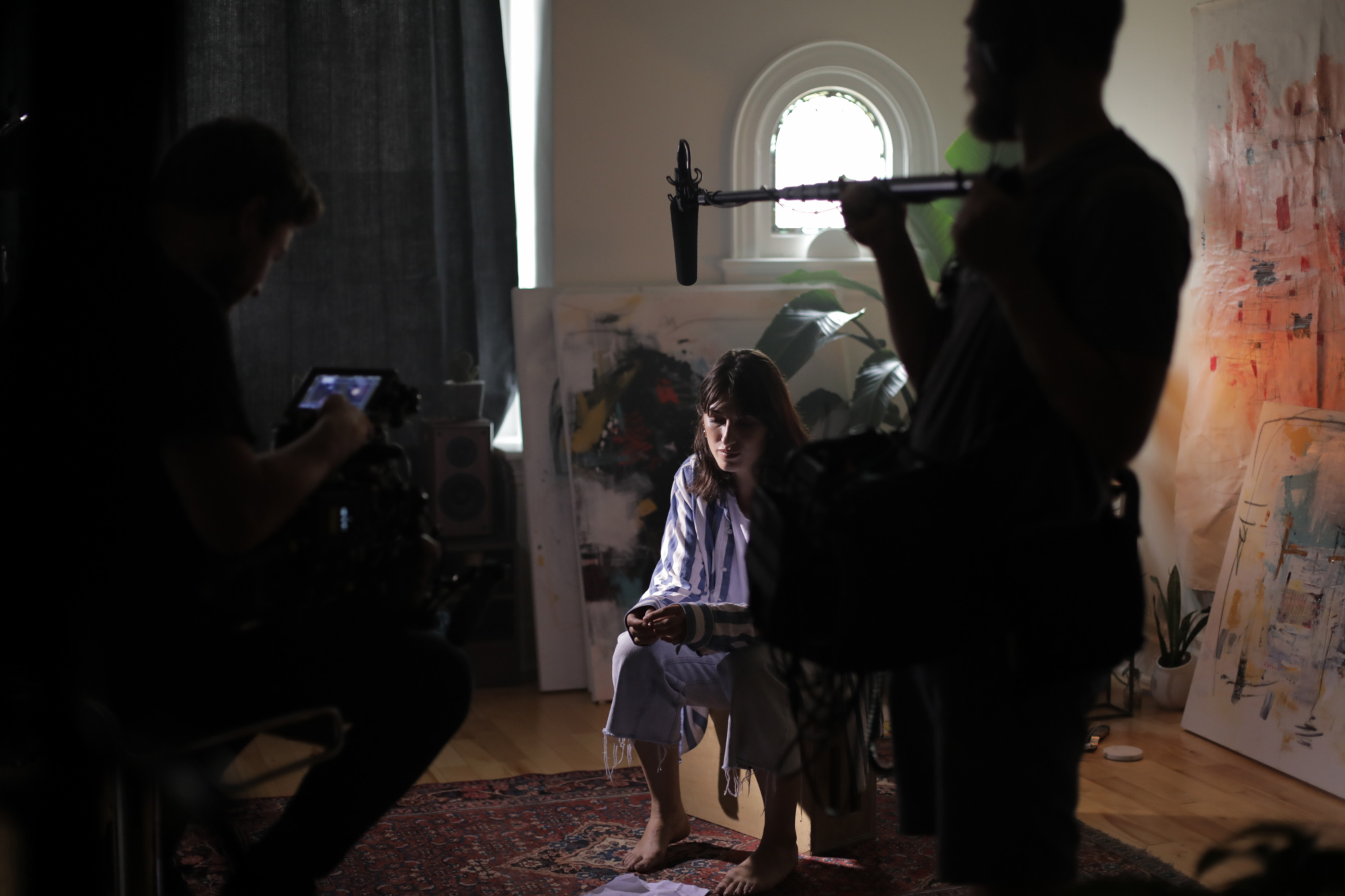 We shot on an Arri Alexa Mini that was kindly donated by the kind folks at Ontario Camera Rentals, and Zeiss Super Speed lenses that came from the William F White. The whole thing really goes to show the power of community and collaboration, with other directors giving notes and equipment, multiple rental houses donating gear, and a group of people coming together simply for the love of the script and the love of filmmaking.

There’s a self-reflective rawness to Dina’s monologue, how did you manage to reach a place of such vulnerable honesty with her?

The script started as something more poetic, but again it felt a little impersonal. Once I had a working version of the script completed I sat down with Dina and we began to tweak the script to feel more personal to her. We changed language to reflect how she would speak, and removed the third-person point of view from the script, leaving us with something that feels as personal as it possibly could. The narrative and the feelings are based on Dina’s own experiences as an artist and as someone who deals with the issues reflected in the film, so nothing ever felt forced or convoluted. It was important to her to share those feelings as honestly as we could, and that is what we aimed to do – to visualize what goes through one’s mind in that moment and through the process of creation.

We’re living in the artist’s mind, seeing and feeling things the way they do.

There was an earlier cut which you further refined following a public screening. How did people react to the themes of the film?

We screened a more raw version of the film as part of Dina Roudman’s solo exhibition on September 5th, and went back to the edit and finished the film over the next couple months, waiting for favours for sound and colour as necessary. We had some incredible feedback after that screening, and took some of those thoughts and incorporated them into the edit.

I think the subject matter has resonated with people more than we could have imagined, with many people telling us that they felt a strong emotional connection to it. It’s been really cool seeing something come together out of nothing. We’re super proud of it, and couldn’t be more excited to get it out into the world now.

I have a couple short narrative scripts in development that I’ve been slowly chipping away at between projects. I’m excited to get those finished and then set out to find a means to make them in the new year. I also recently signed with a commercial prodco called Gas & Electric in the UK, as well as Popp Rok in Canada, so I’m looking forward to getting to expand my body of work and continue to develop my style in commercials, music videos, and narratives. Dina is currently working on another short film of her own, and preparing for another art show as a follow up to Prōˌses.