Tension can be placed on relationships in numerous ways; starting a new job, difficult family members, long distance separation, to name but a few. But, how would you react if you discovered your partner was leaving forever? That’s the pretence Director Layke Anderson places at the forefront of his sci-fi drama Mankind, which even calling sci-fi seems too self-contained. Anderson blends genre to focus on the core relationship at the heart of his film, two men, on the cusp of relationship breakdown confront the issues that have arisen over their time together. DN spoke with Anderson ahead of Mankind’s screening at The Shortest Nights Festival about creating tension and curating the intimate depth of a relationship between his actors in a short period of time.

What’s the origin story of how Mankind came about?

A close friend had written a short story about a man discovering a secret on his partner’s laptop and I was interested in adapting it. It was a very well written two-hander with a very simple setup in terms of filming, so it was going to be more of an acting exercise than anything else, but as I began adapting it I was thinking a lot about the science fiction genre and wanted to play with that – similar to how I explored the fantasy genre in my earlier film Happy Thoughts, albeit it never in an explicit way. I’ve always felt that both science fiction and fantasy are reflections of our own reality – a bit like a mirror in which we can see our real self. I replaced the original ‘laptop secret’, something which would have made a very different and much darker film, with that of a someone signing up for a one-way mission to Mars, and altered a lot of the original dialogue.

I was very conscious that both characters would remain male as they were presented in the original story however, sexuality is never once questioned or discussed. There were concerns from a potential producer early on that the characters should be changed to male and female so as not to exclude a straight audience. I made the decision not to collaborate with this viewpoint because the film was never going to be about sexuality. The film is certainly about competitiveness and masculinity however and that is what led me to use the planet Mars as the driving force in the film. Mars, after all, is the God of War.

I’ve always felt that both science fiction and fantasy are reflections of our own reality – a bit like a mirror in which we can see our real self.

Audiences can choose whether to take this idea of the journey to Mars literally, or simply see it as a metaphor for the end of their relationship, or this phase of their relationship since the film is open-ended. So, although initially a simple set-up, it was while reading up on the planet Mars, fragile masculinity and depression to an extent, that I began to delve a little deeper, and began constructing more visuals, backstory and fragmented storytelling. It was quickly turning into an experimental film, which made me very excited.

What’s your screenwriting approach? There was so much told through hints in the dialogue, rather than pure exposition.

I’m always very explicit in early drafts of writing when it comes to dialogue, but perhaps ‘on the nose’ would fit better, but then that’s usually to help me not get lost in the early stages. Then I find that the more I re-read or rehearse as the drafts evolve, the more I strip away. I always keep those earlier drafts for reference, or for actors should they have questions, but always find that less is more, and replacing a speech with a look leaves more room for interpretation.

I’m also playing with what’s real and what’s a memory or a dream, and I feel that I can get away with being more ambiguous sometimes. If we were to eavesdrop on a conversation between a couple, perhaps lying on a sofa and zoning out together, or even post-coital, or on a tube carriage, I doubt their choice of words would be explicit. I wanted these characters to feel like that wherever possible – so that the audience is somewhat excluded to an extent, looking in, but is still interested in what’s happening and can follow things however they choose to.

I was very conscious that both characters would remain male as they were presented in the original story however, sexuality is never once questioned or discussed.

How did you build the relationship between your actors to give the feel that their relationship had depth and length?

I introduced the actors in July 2017 whilst writing the film. It wasn’t a formal introduction, and I wasn’t set on my casting at that point, but I liked how they got on. They both had what I was looking for. One of the first things we shot was a sex scene and that was a conscious decision which I think served as an ice-breaker. I showed them photographs of how the scene would look in terms of framing and lighting, and made sure they felt comfortable.

They chose to stay together in the apartment location overnight where we filmed the main arc of the film. When the rest of the crew arrived that morning to shoot, the actors were running their lines and making breakfast for everyone in the kitchen we would be filming in that day. The apartment, which was rented for filming, had sort of become theirs for that time, and there was a real sense of being on their territory. Shooting over a longer period of time than usual for most short films may have also helped cement the feeling of length in their relationship, as there were some small physical changes going on such as hair and beard length. 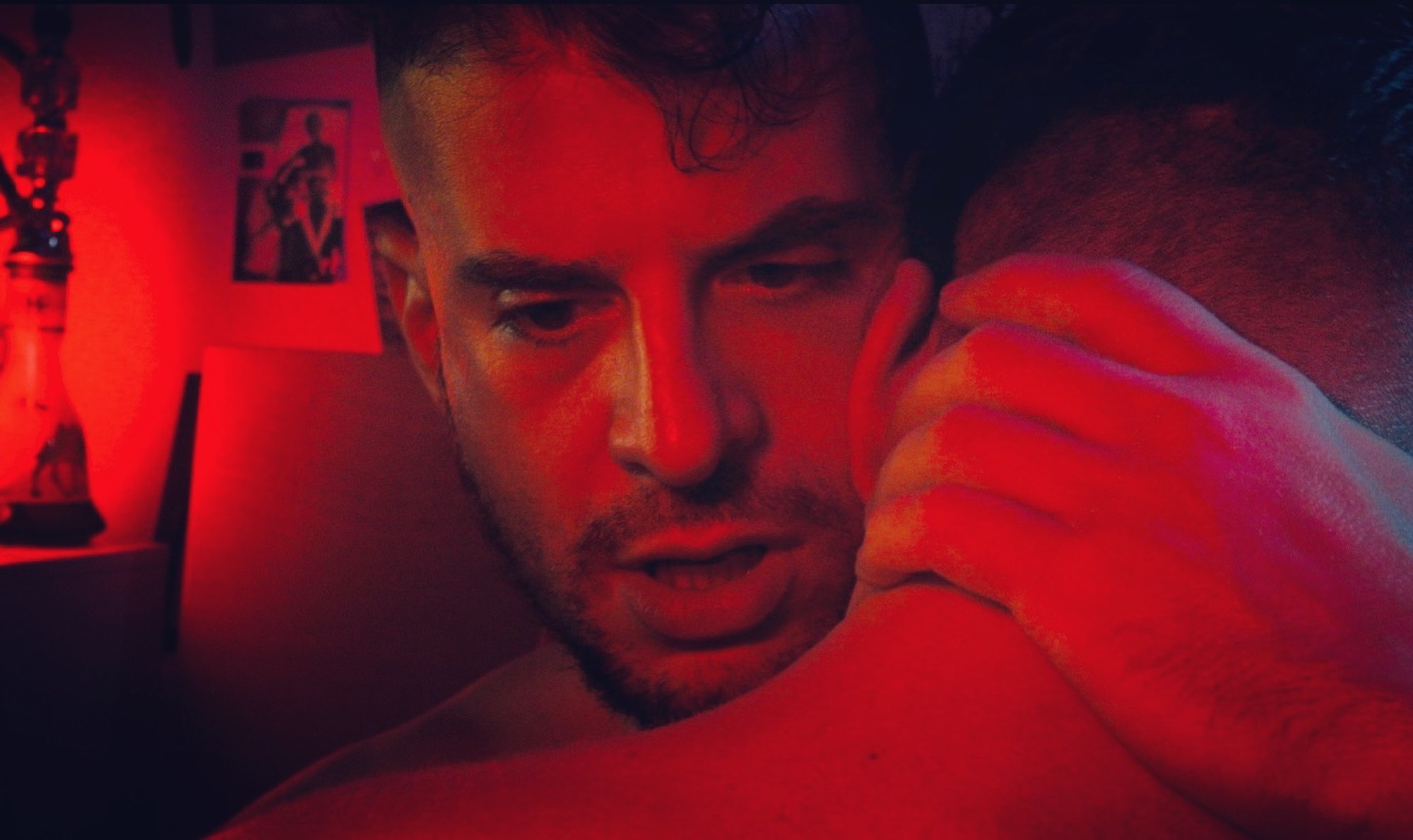 How long was the production process? What was the crew dynamic like, were there many people on set?

I began writing the film in early 2017, and we started shooting that October, wrapping in April 2018. It then took me about four months to edit the film – but I was also working a full time job and in the process of buying a flat, so the film did take some time, certainly more than usual. There were four blocks of filming altogether. Continuity wasn’t an issue as the film is set over an indefinite period of time.

I was taking the experimental approach that I had done before, which for me is an extremely pleasurable way of working. You aren’t always sure where it’s going sometimes, but you have every faith that it will get there. The majority of the film was financed from the sales of my first three short films to a distributor, but it was indeed still a micro-budget production, as all my films have been. Those restrictions don’t bother me. They instead allow you, or rather force you, to be more creative. So, as long as everyone is being paid and is fed, watered and happy, then I am happy.

The crew dynamic was very positive, with everyone getting along well and the most crew we ever had on set at one time was five, but often it was less. I worked with three different camera operators on the film as I wanted to combine the perspectives and talents of different filmmakers/visual artists with varying backgrounds and styles, all of whom I have worked with before. Although it is common to have a single director of photography for a narrative film, I felt these different approaches would lend to the clashing mindsets of the characters, whether that be their imaginations, memories or reality, and create a more uneasy and spontaneous look to the film, something more resembling a dream.

Restrictions don’t bother me. They instead allow you, or rather force you, to be more creative.

Did you come across any challenges during the shoot?

As usual, time and money are always the two biggest challenges anyone has to face, but we went in very prepared. I knew this was a low-budget film and so knew what to expect. The only problem I can recall was when we couldn’t access the power socket for the fridge, as the hum was picking up slightly on the boom mic. We scrambled around for a while before giving up, but our sound mixer did a wonderful job in post, cleaning up any noise.

Also, I had initially cast over twenty extras for the opening sequence, however only three showed up for filming, and I’m extremely grateful to those three. But again, I had prepared for the worst to happen and so had a contingency plan with the cinematographer for that sequence and we used a different lens to make the frame look busier. It would have been an entirely different opening visually, but as it is, it says exactly what I wanted it to say.

Could you talk about the decision to include space imagery? How did you go about putting that together, was it through an animator?

The space imagery in the film is what bookends the story, opening with the sunrise over the Earth and closing with the sunrise over Mars. I had always imagined a kind of violent juxtaposition from the beginning, of seeing the peaceful blue Earth with the red, sweaty torsos of these men, to show ‘mankind’ as these savage, sexual animals on the Earth, almost like a plague, and perhaps not even ‘from’ here – which is what I’m really alluding to with the voiceover. Using Mars to close the film is an image of hope, or at least hope for that character, because of what it represents for him.

These are epic images usually reserved for sci-fi documentaries or Hollywood films but in this scenario, they highlight all our insignificance. It’s all archive footage that I chose to use, rather than work with an animator, as is also the case with the NASA imagery. There’s so much archive footage out there that’s readily available. I also splice ‘home video’ footage of the couple’s history into the film – one of the men on the beach looking across the ocean as the sun sets – against these space visuals highlights just how small we are. At least that was what I was feeling in the edit and what I was going for. It’s an unusual combination.

I’m not in a rush to make another short film, but will never say never, as I’m constantly having ideas. My energy has been focused on writing longer-form lately, and I’ve two feature screenplays going at the moment, both very different from each other, and I’m loving the process of writing again, and these new characters I’ve been spending time with. However, I do try to stay busy and have another short film idea that I’m thinking about, but I really need to be in love before I can commit.