There are many films which focus on the use of liminal space, be it films set entirely in cars, trains, planes, or any other form of transport. There are also films which focus on the life cycle of animals; Todd Solondz’ Weiner-Dog springs to mind as one which utilises the comedy of the perspective of its animal protagonist so well, reflecting the lens back on the society which decides its life. Director Matt Cascella does something different, he decides to tell the life cycle of an inanimate object, a bed, and more specifically, a mattress. Beds is a wonderfully comedic short about an object we spend roughly a third of our lives living in. DN spoke with Cascella about why he decided to tell this story.

Where did the idea to make a film about the life cycle of beds come to you?

I think the kernel for the film came from my own bed. My wife and I have a hand-me-down mattress from my Mom, and we’ve tried, a handful of times, to get rid of the clunker. It got me thinking about a bed’s story and how interesting and sort of tragic it all is and, more importantly, how overlooked it is. There’s not a great deal of emphasis on the actual mattress during the scenes. The people are a bit careless, reactive, and unpleasant, for the most part. The bed becomes a bystander, unwillingly witnessing the scenes play out. Eventually, it gets snot-rocketed on, left for trash, etc. so hopefully the bookends of the film honour the bed in some way, emphasise a lifetime of neglect. Side note, we have yet to get a new mattress.

I love the section where the removals guy is trying to move the mattress, there’s so much great physical comedy, could you talk me through the process of constructing that scene and creating it with your actor?

It’s great to hear that you enjoyed that scene. Ross, the actor playing the moving man, is a good pal and collaborator. That vignette was definitely the loosest of the bunch, with really just a rough blueprint to go off of. Initially, it was a two character scene where the main obstacle was a language barrier so things definitely morphed! Ross is such an effortless improviser that really all we needed was a prop, the Queen mattress, and a stairwell. We were able to roam freely with moments and details, eventually getting to that piano, Ross is also a brilliant songsmith. We shot a few different resolutions but ended up going with something a little more vague. I just like that this guy can’t catch a break. 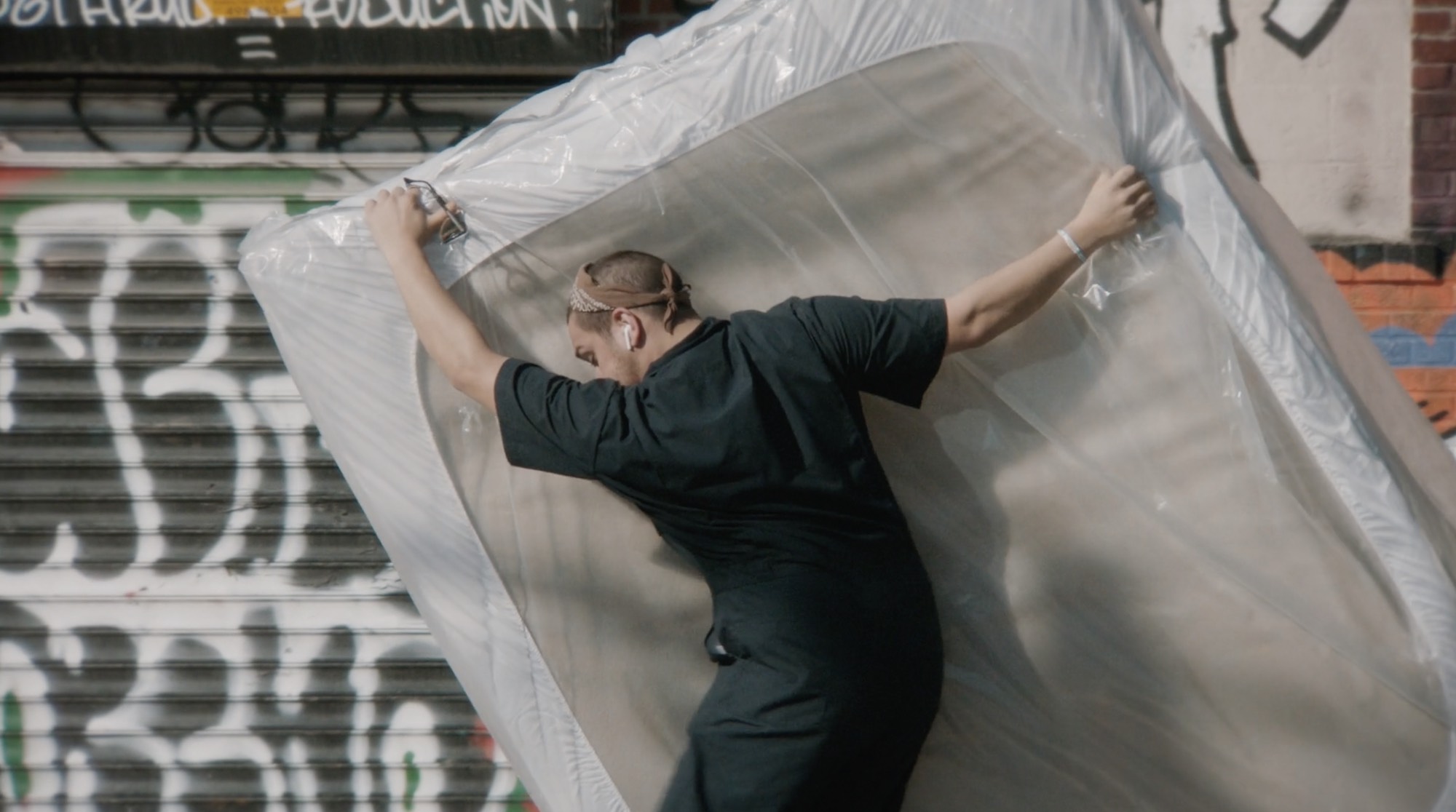 How did you create the scenarios throughout the film? Were there any sketch ideas that were left on the writing room floor?

I knew that I wanted the key stages of a bed’s life; factory floor, salesroom, bedroom, trash heap, but at some point I got a little out of hand with an earlier draft. I think there were six or seven vignettes, too many characters, too many locations, too many ideas. With some trusted eyes, we were able to chip down the scenarios and simplify.

However, we shot a fifth story during production that did not work out in the end. Tonally it was a mismatch, and I couldn’t get a handle on what the scene was all about. Oddly enough it was a similar feeling I had in film school, just utter confusion, topped off with anxiety… sprinkled with panic. But those moments of alarm are humbling and helpful in the long run.

It was a similar feeling I had in film school, just utter confusion, topped off with anxiety… sprinkled with panic. But those moments of alarm are humbling and helpful in the long run.

How long did the whole production process take? Were there any challenges that arose whilst filming?

I tried to keep the writing process pretty swift, similarly with the shooting. We crammed all of the filming into three days. I had a lull with work last October, so I used that space to hammer out the edit. The biggest challenges always stemmed from money or lack of. Casting was at a breakneck speed. We had a few hours to film in the mattress shop so that was a doozy. We almost got kicked out of a location. But all in all, we went pretty unscathed. The cast and crew had great attitudes about everything so that helps tremendously.

How did you maintain a consistent tone whilst shooting different scenes with multiple actors?

I equate a lot of the even tone to Corey Gegner, the cinematographer, who’s a longtime collaborator and friend. We decided on the lenses and look early on, and Corey has the uncanny ability to bend his sensibilities towards a specific aesthetic. With this project, I wanted something natural and low-key. We used older lenses to create grain in the picture. We watched films by Mike Leigh, Sean Baker, Ozu, filmmakers who are unobtrusive while being incredibly observant. I tried to keep the performances within a certain feel, while also letting the actors roam around, add lines, add details. Hopefully, all of these elements add to a naturalness.

Hopefully the bookends of the film honour the bed in some way, emphasise a lifetime of neglect.

When Beds ended, I was left genuinely wanting to know what would happen to the mattress? Would the boys go back and get it? Would it get taken to the dump? What do you think happens to it?

I’m glad this sparked a question. I don’t have an immediate answer to that one. The boys, for the bulk of their scene, are preoccupied, somewhat scatter-brained, somewhat lovable. I’m not sure they would come back but I can’t say. In leaving the mattress, their action bridges us into the choir of mattresses. So, in a way, even though the credits are rolling, the bed takes centre stage… finally.

Beds has some upcoming screenings that I’m excited about. I’m also working on a feature length script that’s definitely out of my comfort zone but I’m thrilled by the idea, and at this juncture in life, I’m all about making myself uncomfortable. My voice is ever-evolving and always in need of a tune up. I’m looking forward to really just going for it with this next one, throwing caution to the wind and taking a plunge.