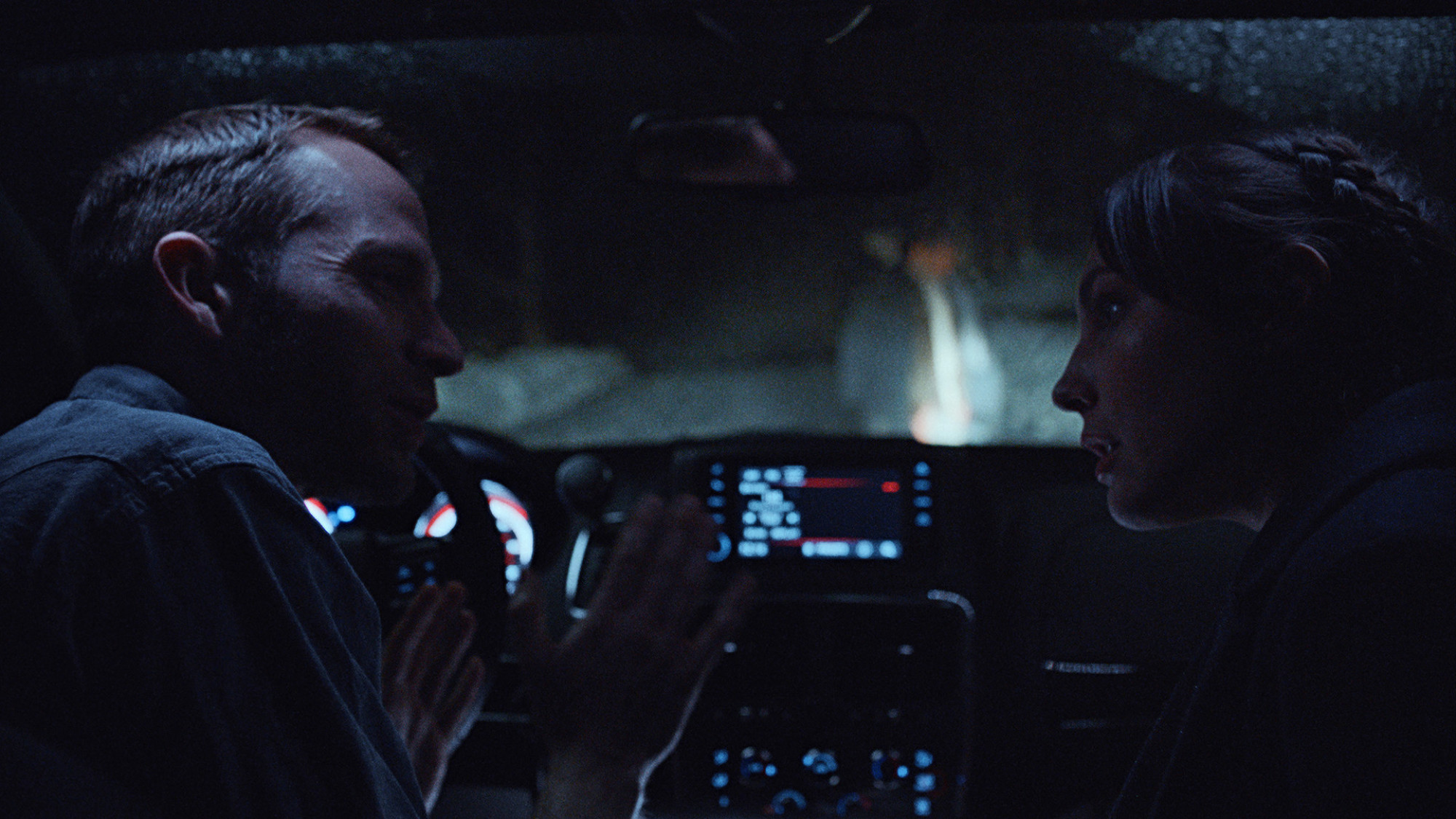 Although the one-shot short frequently provokes a level of admiration for the effective marshalling of a production’s many moving parts, it’s rare that I come away thinking that the restriction served the story better than a traditional shooting approach would have. That, however, was most definitely not the feeling I was left with after watching Brooklyn-based Director Lance Edmands’ tension filled single-shot thriller Whiteout. Impressed by the ways in which the claustrophobic framing of Whiteout’s car bound camera forces us to into the role of complicit witness, I spoke to Edmunds about using the single, unbroken take as an effective narrative device.

Where did this story come from?

For me, this story started out with a very simple image: an old man, standing in the middle of the road, lit up in the headlights of a car. From there, my writing partner and I began to build out the story. Was this man lost? Was he hurt and in need of help? Or was he laying in wait, preying on innocent victims who happen to cross his path? How would we approach this situation? Would we get out to help the man or would we drive on in an act of self-preservation? This simple image conjured up a lot of rich, dramatic possibilities that we were really excited to explore.

Although not the case here, many of the one-shot shorts we come across feel more like demonstrations of technical prowess rather than a choice which serves the narrative. What do you feel the unblinking, continuous nature of the single-shot brings that would be missing if captured in traditional coverage?

I’ve always wanted to make a film that was photographed in a single take. It forces you to concentrate on the timing of the performances and the precision of the blocking. You don’t have editing and camera trickery to fall back on, it all has to work within a single, unbroken shot. But I didn’t want to do it just for the sake of the gimmick. It needed to fit with the story we were trying to tell. Since so much of this particular film was about perspective, it seemed like the perfect opportunity to combine form and narrative. The camera is literally inside the bubble with our characters, experiencing the world from their point of view.

I didn’t want to do it just for the sake of the gimmick. It needed to fit with the story we were trying to tell.

This further exaggerates the idea of the “other” and forces the audience to be complicit with the characters, almost like a third passenger in the vehicle. Hopefully, this allows the audience to ask themselves how they might react in this situation and to examine their own relationship to fear in the face of ambiguity. I also think the single-shot idea allows the tension to slowly build over the course of 11 minutes. If there were cuts, I think some of the air would be let out of the balloon. 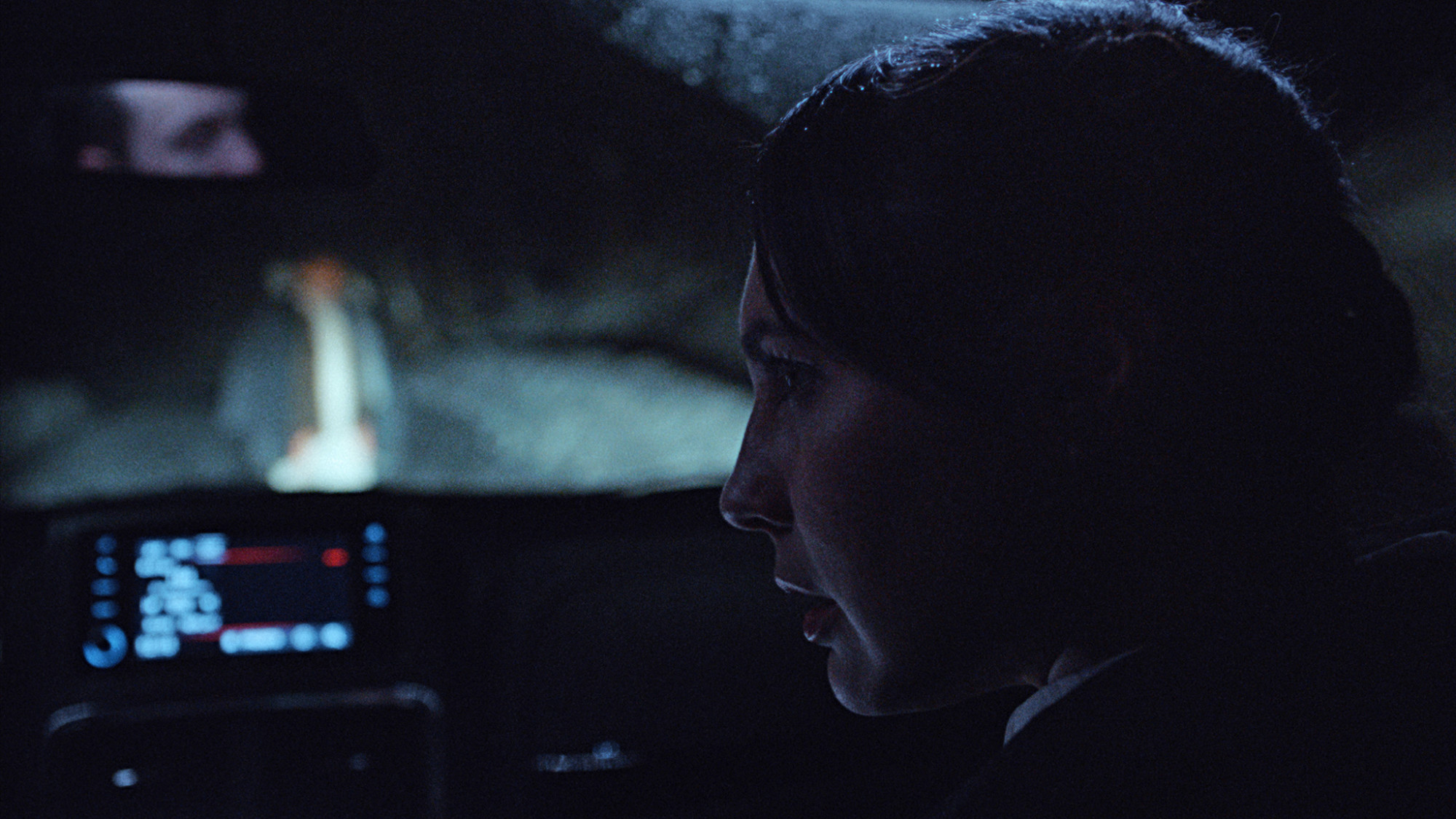 The interior of a car at night doesn’t give you a lot of visual room to play with, can you explain how you rooted us inside this strange encounter while exposing the deep seated instabilities in Lydia and Jake’s relationship?

Sometimes limitations force you to think about ways to communicate information in an unconventional way. For Whiteout, we rarely see the faces of the main characters clearly. It’s a lot of looking at the backs of their heads or them in profile. So their conversation had to convey a lot of clues about their relationship without the benefit of a lot of visual information. I wrote the script with my girlfriend, Sarah Tihany, who also plays Lydia. We mined a lot of our own arguments and insecurities and exaggerated them to bring out the fractures between Lydia and Jake. We needed the audience to understand who these people were in a short amount of time so every line of dialog had to tell you something. Even throw-away jokes mentioning “wine bars” and New Yorker articles give you an idea about the world of privilege these characters occupy.

That stands in stark contrast to this disheveled man, who is clearly in need. They are totally out of their element, so he feels like an alien to them. The fact that the frame is limited to looking out the windshield also plays into this idea of the unknown. What is just outside the lights of the car? What is lurking in the darkness? That limited perspective mirrors the limited perspective of the characters and adds to the tension. What happens when our sense of fear overwhelms our sense of empathy? It can lead to disaster. Hopefully, that idea makes the film resonate with a lot of what is going on in the world right now while still being entertaining, scary, and funny in its own right.

What was your equipment/crew set up for Whiteout and of course, how many run-throughs did it take for you to be sure you’d got it in one?

We had a car rigged with two Kinos strapped to the roof as well as some LED panels on the dash. The DP, AC, sound recordist and me were all cramped in the back of the car. We had the camera on a slider, so we had to seriously contort ourselves to fit back there! There was also a follow-van with the rest of the crew. A couple grips had to jump out during the take to rig sandbags and crash-pads for the stunt. The van also had an LED panel rigged on the hood for police lights. We had written the script for snow and we got really lucky in that there was an actual snowstorm when we shot. This made things look great, but it also got really tricky as the snow began to build up. We almost slid off the road on a few takes!

It became really hard to judge what was working and what wasn’t because of the duration of the take.

The timing of the camera and the blocking of the actors took a lot of rehearsals ahead of time and I made a very detailed shooting script with marks for where the focus and camera should be for each beat. But once everything was rigged and up and running, we didn’t have to shoot for that long. I think we did 8 full takes of the film with a couple aborted attempts. If you screw up a line, or if there is even the tiniest bump in focus, we’d have to start all over again, which meant turning the vehicles around and driving three miles back up the road. All this while a blizzard swirled around us!

In the end, I think take 6 is what you see in the film (with a little bit of VFX work to smooth out the stunt). As a director, it became really hard to judge what was working and what wasn’t because of the duration of the take. By the time you got to the end, it was hard to know if every moment worked. But once I got home and watched everything, I knew we had gotten it. 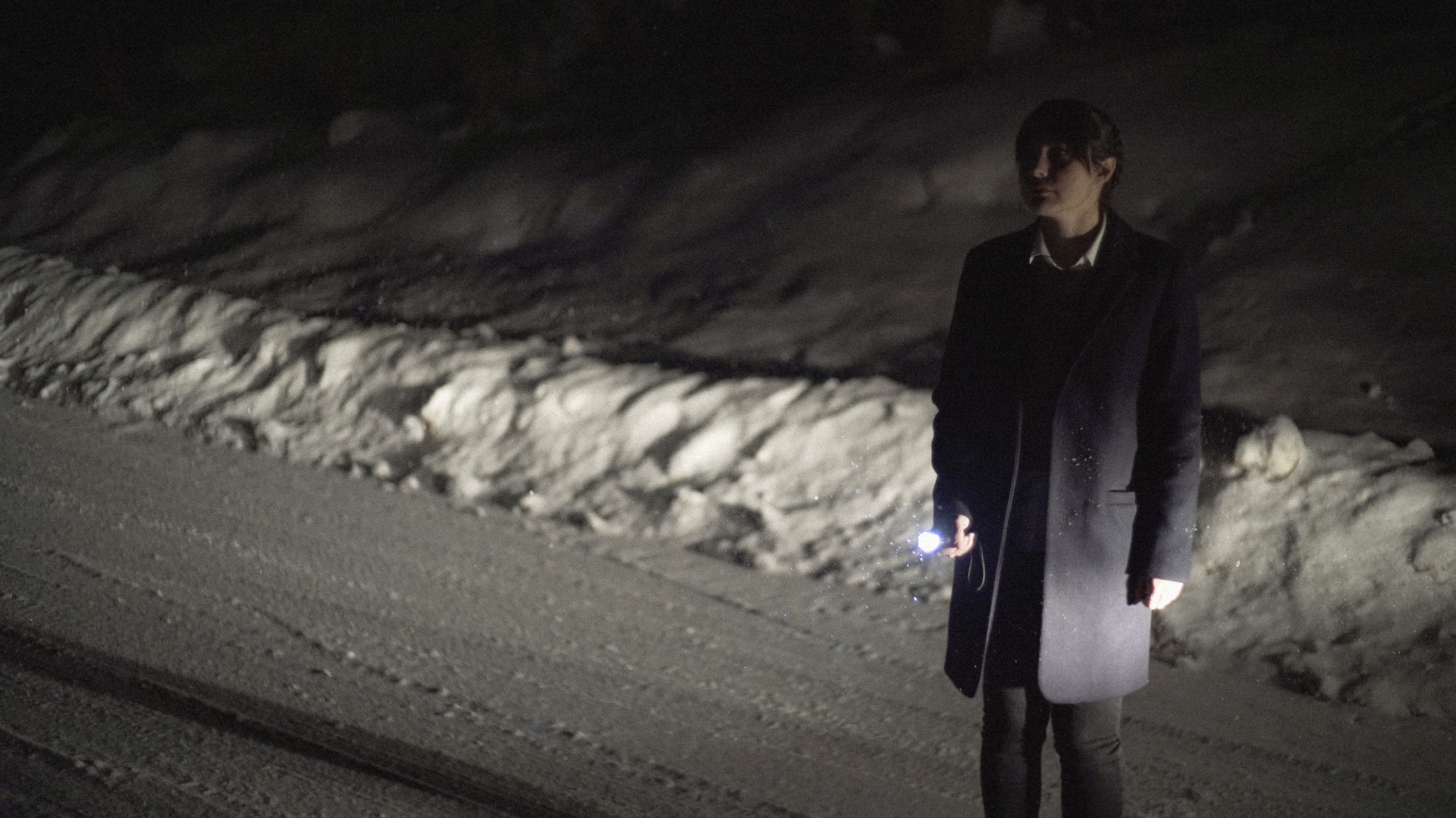 What new marriages of form and content do you have lined up at the moment?

I have a feature that I have been developing for a while now called Brightwater. It’s a thriller set on a Maine island, and we are planning to shoot that in October. I also just finished a short documentary with Topic called The Seeker which should hit the festival circuit next year. Sarah and I are also working on a feature length adaptation of Whiteout that plays on the themes of the short but expands the world and characters. At this point, I have a back-log of scripts I want to make! I also direct commercials, so I stay pretty busy traveling and shooting.