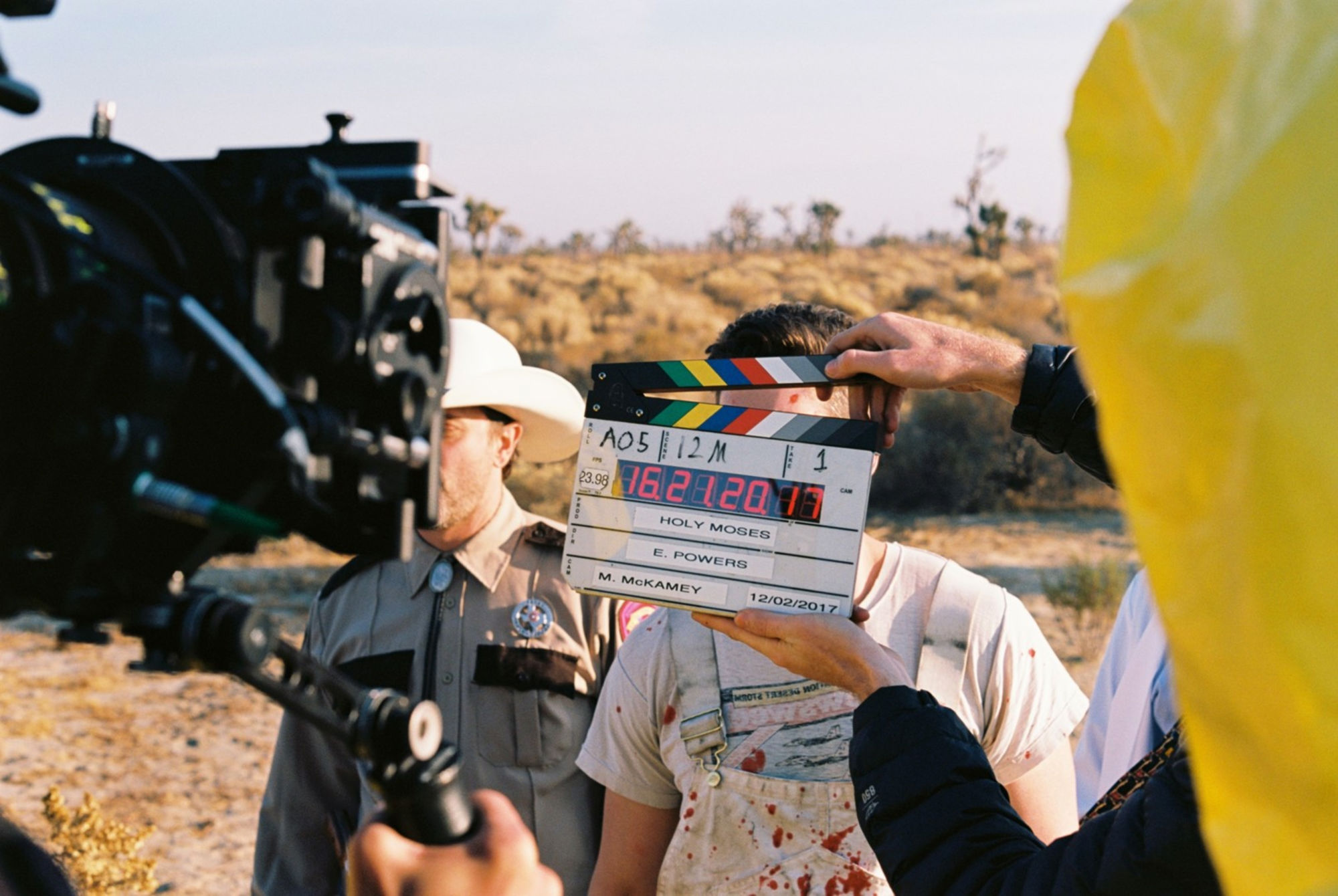 A bizarre metaphysical connection which resonates across time and space, Eli Powers’ Holy Moses sees a pregnant nun in 1960s Ireland and a West Texas gas station attendant 25 years later bear witness to a rather peculiar miracle. Starring Amanda Seyfried and Philip Ettinger, Powers’ absurdist short questions the role extraordinary events play in the lives of the normal people who are rarely the architects of significant stories. Watch it below, after which Powers discusses the freedom he found in writing a script unconcerned by practical limitations and why he’s happy that audiences find Holy Moses blasphemous and reverent in equal measure.

The concept came from letting myself write something I had no idea how to make. I write to direct so there’s always a little voice in the back of my head that’s saying: What will that cost? But for this project, I shut that voice up and wrote with zero regard for what it would take to produce. And yeah, in some ways I shot myself in the foot because it was difficult to get all the pieces to come together – but obviously not impossible because here we are. The ultimate benefit of having removed that pragmatic part of my brain when writing Holy Moses is that now I can look at it and say, as tacky as it sounds: this is me, this is exactly what my soul looks like. I didn’t make many compromises.

As far as developing the content itself, it was relatively painless. I didn’t set out with a theme in mind, and I tried not to overthink anything because that’s usually what makes writing miserable. The bulk of the script came together in three days or so. I was in a hotel room and listened to Pet Sounds over and over until I got sick of it. It wasn’t an idea I had before I sat down to write. All of a sudden it was just there.

The concept came from letting myself write something I had no idea how to make.

When we premiered at Raindance, someone in the audience asked me what The Priest meant. I tried to answer their question by going into his backstory but they were sorta disappointed with that and asked again: “No. What does he mean?”. I realized that they were really just asking for a 1-to-1 explanation of that character as a symbol. Which I have absolutely no idea about. There’s no secret symbolism here. They’re all real people. These are all real things that happened to them, in my head at least. It’s a true story if you just let it be. I wouldn’t want to define meaning for someone.

I really enjoy reading the comments on our YouTube link. They run the gamut between: “True believers beware, this film is Satan Incarnate!” and “Wow, what a beautiful piece of Christian Filmmaking.” I love that people can’t quite seem to decide if Holy Moses is sacrilegious or a deeply religious work of faith. It’s a fine line, apparently. I’m content to exist in the grey area between those interpretations.

The production of Holy Moses existed as two polarizing parts: two different DOPs, two different crews, two different coasts. The first shoot was a magical jaunt through the snow, and the second was a logistical tightrope walk in the middle of nowhere.

I love that people can’t quite seem to decide if Holy Moses is sacrilegious or a deeply religious work of faith.

We shot Upstate New York for Ireland. We had one day and spent the morning on an active dairy farm and the afternoon in a Catholic church. It wasn’t even a full production day, we shot a 9 – 5, which wouldn’t have been possible if Jordan and I hadn’t prepped so extensively. The first take we did was a close up on Amanda walking towards camera through the fields in the snow.

We shot on the Alexa Classic with Zeiss Superspeeds. Jordan and I knew we wanted to shoot wide and close so we opted for 16mm as our go-to. When we framed up for the first time, we were staring at the monitor and asked Amanda, “Hey, how close are you to us right now?” and she was like, “You’re literally right front of me.” And sure enough, we looked up and she was about six inches away from the camera lens, and we were like…ok, I guess we’re pretty wide then.

Months later, Palmdale became our West Texas. Some astute viewers have called us out on the presence of Joshua trees in the background, which wouldn’t have been as abundant in Texas, but we already had VFX working on creating an entirely CGI fire, and rotoscoping out a bunch of unwieldy street signs, and I didn’t have the heart (or money) to ask them to remove the trees too. I don’t mind the imperfections.

Our lighting was minimal so our days were blocked around the movement of the sun.

We wanted our West Texas segment to feel like a different world so we swapped out the spherical lenses for the Hawk V-Lites in pursuit of a more panoramic Western feeling. Our lighting was minimal so our days were blocked around the movement of the sun. For our finale scenes we had incredibly brief time-frames to execute within. Fortunately for the crew, our actors were pros and zeroed in on their performances from take one.

Being so pressed for time had a huge impact on our visual style. Since we didn’t have the luxury of doing traditional coverage, we decided to play many of our scenes as medium one-ers instead, which ended up being a stronger look anyways. If we had endless time we might’ve been tempted to just shot everything until was dead.

I was lucky to have been able to work with a cast of this incredible caliber. They let us all catch these brief glimpses of their souls on the screen and to witness that in real time was something truly special. I’m enamored with the range of their performances in this short piece. The look on Phil’s face when he looks out over the desert at the end breaks my heart just a little bit. His capacity for depicting characters both broken and unbroken is unique. And the way that Amanda sighs in resignation in the confession booth, and Tommy’s uneasy stoicism while he grips the steering wheel, and Dan’s absurd confidence during the cow post-mortem…it’s all just good old fashioned movie magic, man.