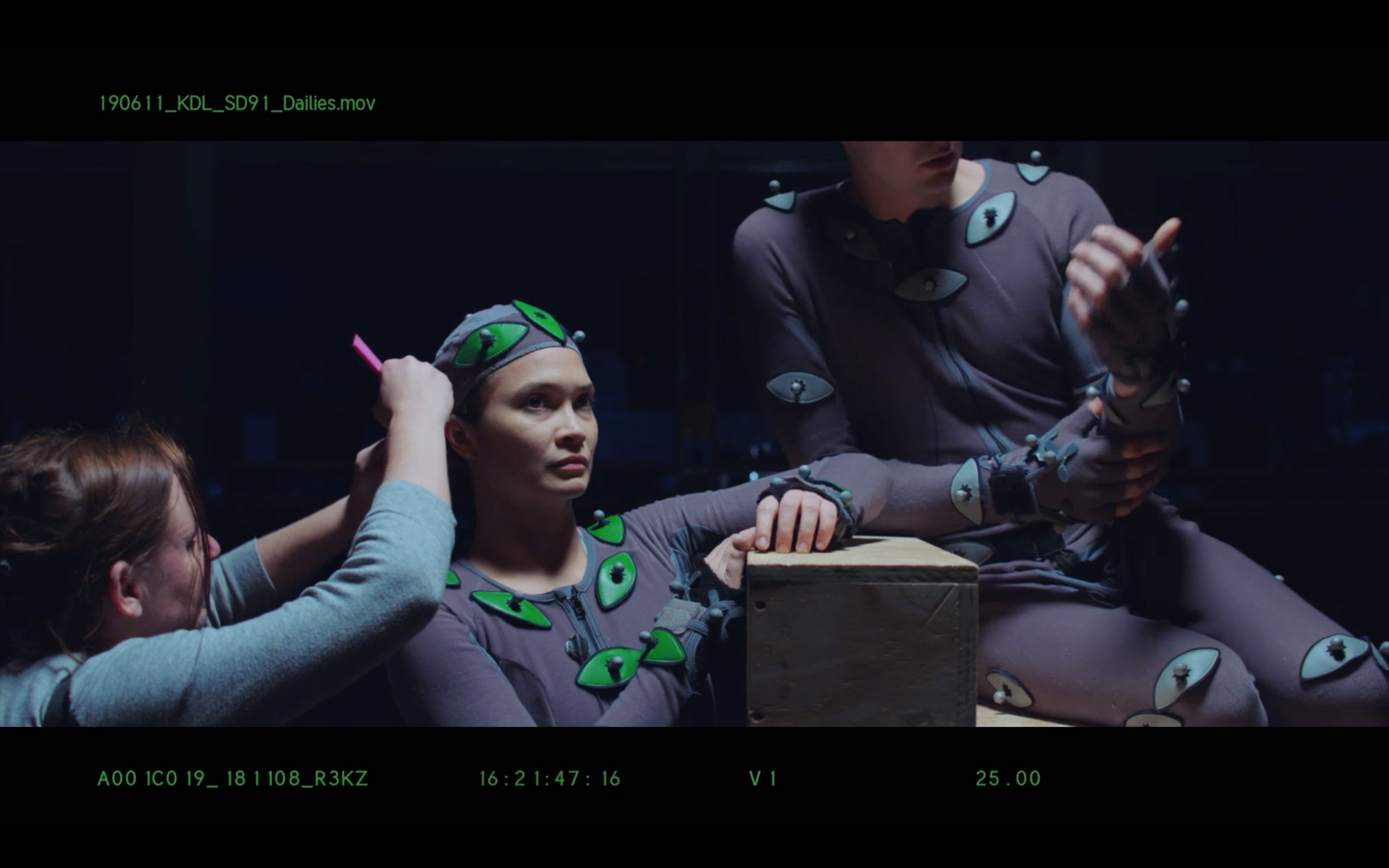 Do you ever imagine bumping into your ex when you’re both clad in skin-tight nylon suits, impersonating a pair of horny dragons on a film set? Well, that’s exactly what happens to a couple of ex-lovers in Benedict Cohen’s Rushes. Seemingly cut together using discarded footage from a film shoot, the five minute comedy mixes a perfect blend of fresh, quirky and compelling, to tell the story of motion capture artists Alice and David who split up 4 years ago. But has time completely extinguished the passion they once shared or is there may be a lingering spark, powerful enough to reignite the fire between the two love dragons? DN is squawking with happiness to present the premiere of Rushes and to chat to Cohen about lingering exes, voyeurism, exotic bird mating rituals and more.

What inspired you to write Rushes? Was it perhaps an unexpected encounter with an ex?

I had some visual ideas swimming around for a while. There is a similar scene in the film Holy Motors, which I love. But I’d also been watching behind-the-scenes videos of Hollywood films and video games. I became fascinated with the surreal things you have to do to create a make-believe digital world on screen: greenscreen, motion capture suits and other bizarre technical paraphernalia. I thought there was an interesting disjuncture between that and the naturalistic performance you are trying to get from the actors.

And yes, an ex did play a part. I wrote the script in September 2018. I’d recently had one of those strange encounters you have with an ex, where neither of us managed to say anything we wanted. Afterwards, I found myself playing out different scenarios and ways the conversation could have gone in my mind…

There is something really compelling about the concept of an entirely separate story within a story – one that ends up discarded on the edit suite floor, never to be seen or heard by the audience. How did the idea to play out this (ex) love story through BTS footage come about?

I think the conceit works as, weirdly, it makes the interactions between the actors appear more naturalistic. It feels like we’re voyeuristically gazing in on something we shouldn’t. So hopefully it makes the audience lean in and want to know more about the couple.

It feels like we’re voyeuristically gazing in on something we shouldn’t.

It was the confluence of several ideas. I’m a big fan of Kristoffer Borgli’s meta-cinematic shorts and a film called Hydrangea by Jim Cummings. Both play with the audience and implicate them in what they’re seeing. I also kept on laughing at little moments between takes while looking through the rushes of previous projects. And I liked the idea of doing a short where one core concept structured the entire film. 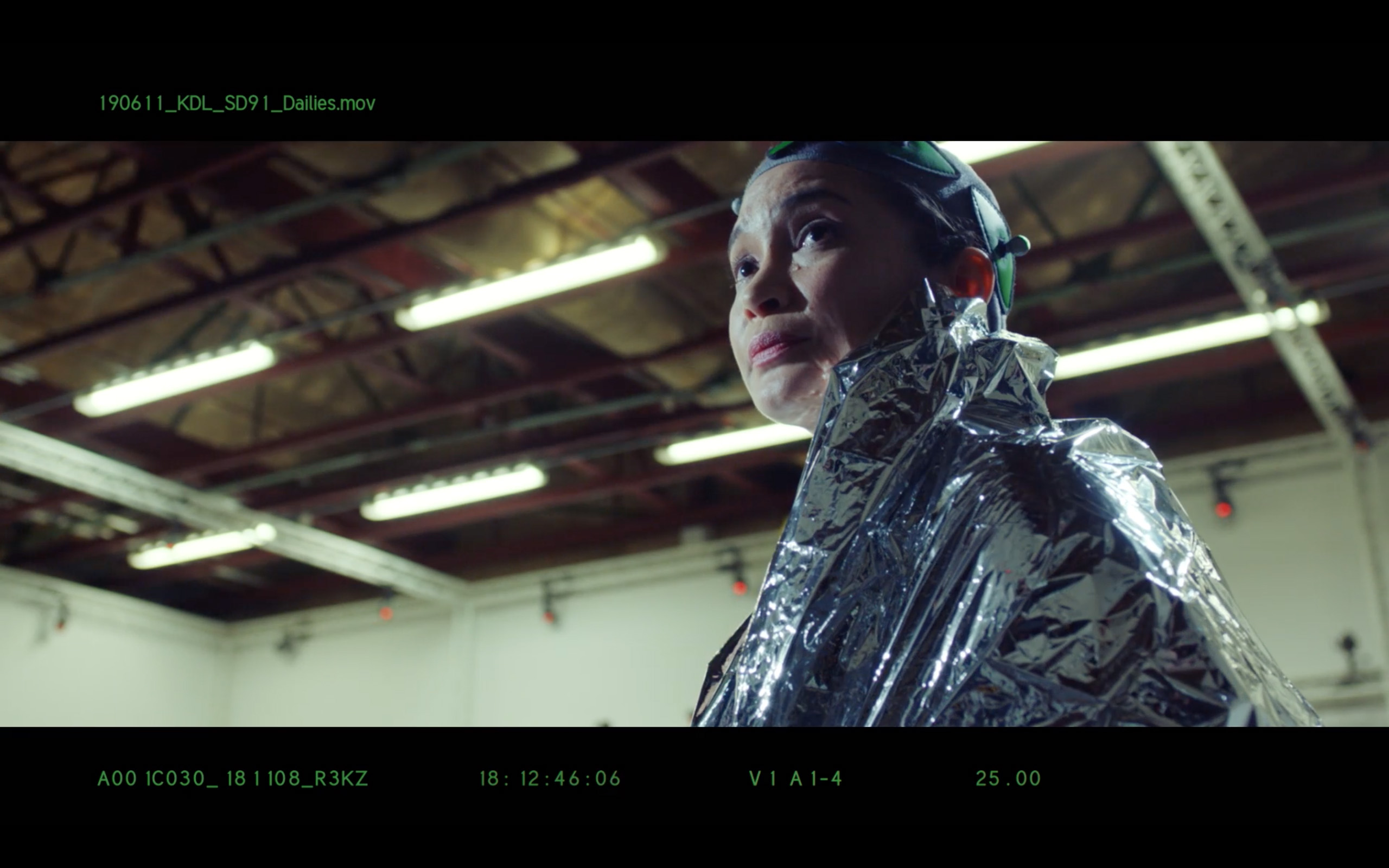 Did shooting a film set present any challenges or was it in fact easier to stage?

It definitely made things a lot cheaper. And we had zero budget beyond the equipment (which the NFTS let us use). We were very lucky to be allowed to shoot at Centroid Performance capture studio at Pinewood. They were very generous and allowed us to use the costume and props they had as well. We definitely wouldn’t have been able to make the film without them.

The crew you see on camera were also our crew on the day. Things got a little confusing when we were clapper-boarding twice, once for us and once in the scene. But the crew were all fantastic – if they hadn’t of been up for acting as well it would’ve been a pretty empty film set.

The space is enormous and brightly lit. Making an industrial space look nice with minimal lights was tricky. But because of the concept, we could pretty much do whatever we liked. In this case, turning all the lights off and stylising things up a bit.

Why not?! Hopefully, it adds a little bit of wild silliness to a story which otherwise could take itself too seriously. We watched some exotic-bird mating rituals before choreographing their movement to get in the mood.

There’s also an amazing behind-the-scenes video of Benedict Cumberbatch acting as Smaug, the dragon, in The Hobbit. He is really going for it and even though he’s in a grey suit in a bland room he manages to make himself look like a full on, badass fucking dragon.

We watched some exotic-bird mating rituals before choreographing their movement to get in the mood.

We’ve all thought about what we’d say to an ex if we bumped into them today, but it rarely plays out as we imagined. Why did you feel that the subject of fantasy versus reality in the context of love was an important one to explore?

I think there is a particular way that an ex, or anyone that is close to you, sticks around in your mind. You can almost hear what their response might be to a question. You can happily have a conversation with them all alone in your own head. As one of the characters says, their blueprint remains fixed in your mind. You might imagine how a reunion could play out. Or you might replay a moment from the past but give it a different ending.

I recently wrote my first feature film. It’s about a group of disabled people who pull off a heist. I’ve also written two new short films while on lockdown which I’d love to make – but first I need to get hold of some money and PPE…