The fourth instalment in the year-long Legacy project — celebrating Bob Marley’s myriad contributions to topics such as women’s rights, Rastafarianism and uniting the Black diaspora — Rhythm of the Game takes a deep dive into the musician’s love of the beautiful game. The result, featuring contributions from sons Ziggy and Damian, is a deeply enlightening exploration of what made Bob Marley special, as well as a look at the power of football to unite the world. We talked to director and football fanatic Marcus McDougald all about the project.

Tell me what the Legacy project is and how your involvement in the football episode came about?

It’s a project that Universal, Tuff Gong and Island Records committed to developing for the 75th anniversary of Bob Marley’s legacy, or as the Jamaicans would say, his 75th earthstrong. They were committed to really bringing his story to life. I know the director of content at Universal Music, Dezi Catarino. He knew my close proximity to football as I’m the head of creative and branded content for L.A FC. So when he initially created a list of topics that they wanted to get into, football was a critical part of that conversation.

This was a point of passion for Bob Marley. We didn’t touch on this in the documentary, but when Bob was buried, they left him with his three favourite things: his guitar, a stock of weed and a football. When they say that Bob was as passionate about football as he was about music, it’s not an overstatement.

I didn’t know anything about Bob Marley and football. How much did you know before you got involved in this project?

I didn’t know a ton about Bob Marley before the project. Having gone to UC Santa Barbara, right on the water, Bob Marley’s music was ever-present, but I never really dug that much deeper into his story. When the project started, I dug in and found elements of interest. Football is a big one but his contribution to bridging the gaps in the African Diaspora is something very close to my heart. It was really an opportunity to learn a lot, as oftentimes, the ideas and the concepts were put before the man himself.

When Bob was buried, they left him with his three favourite things: his guitar, a stock of weed and a football.

Bob Marley is one of these transcendent figures, who you see on countless t-shirts, beset with stereotypes of jammin’ and smoking weed when in reality, he was a complex radical with a mission to change the world. How much of that did you want to put in that film: to not just celebrate the man as the legend, but also to see him a real person with real aims?

It was a really important part of our exploration. There’s this notion I heard not too far before heading into this project: dichotomy creates dialogue. I found that really valuable in exploring this guy who has been simplified in the mind of an entire generation, as, like you said, chilling, jammin’, mellow, one love, positive vibrations and smoking weed. But there’s so much more complexity to that. One of the most interesting juxtapositions against this traditional perception is that he was actually very stern, very tough; he outworked everyone, not unlike many other extremely successful people. These qualities are overshadowed by a more narrowed perception. The film was definitely about finding that balance between celebrating the mission and his primary objectives, while still diving into the means by which he saw those missions and those goals coming to reality.

In the film, there’s a lot of talk about how life is about vibration and rhythm, and there’s a link drawn between the rhythm of football and the rhythm of music. How did you want to reflect that in the style of the movie?

What I try to do early on when researching is create a few contrasting concepts then try to build a narrative around that. In terms of camerawork and editing, this notion of structure versus flow kept popping up. We were really trying to make sure that there was enough structure, especially given the length of the film and the amount of ground we had to cover. But we also wanted to lean into the importance of flow and this more subjective experience that makes the viewer a bit more present in the moment and feel some of the visceral qualities of the environment and the ethos.

He was actually very stern, very tough; he outworked everyone, not unlike many other extremely successful people.

What helps is that this is part of a 12-part series. Parts that are touched upon in your film, such as the assassination attempt, are filled in in the other films. What was it like working within the vision of the project as a whole, and to fit your story within this larger narrative?

There is a bit of a relief in the sense that you’re really trying to focus in on the specific storyline. Ours is specifically about Bob and football. Because of that, it gave us a lot of room to tell a bit more of a larger story, as the chapters unfold through this theme of birth, life and death — but not with the pressure of having to capture all the specific moments as those are covered in other episodes.

I also feel that it works as a reverie on football by itself ‘apart’ from Marley, about how football is a part of the rhythm of life. How did you try and balance the story of Bob Marley and Jamaica playing football with a universal story of football and its power?

A part of that is through framing the chapters in a way that allowed us to start with more of an allegorical approach. Then we get into this frenetic space where it’s the first moment you attach this story specifically to Bob. All of this plays out and there’s an opportunity to create a rhythm in tone, and a rhythm in the information that was being shared. At the end of it, we head ‘back’ into that allegory as we try to create this full circle, to end it on this notion that vibration rings forever, to button it up in a way that picks up where it starts.

The wealth of archive footage on offer here is mixed with contemporary footage of local Jamaicans playing in streets, parks, and football pitches. How did you get that footage?

There’s a bit of it that was pre-planned, but there was a real sense of discovery once we were on the ground. I reached out via Instagram to a gentleman on the ground named Shamal Thomas who is heavily invested in the local football scene. We reached out to him and recruited him to help us get access to these spaces and to make sure we were documenting it appropriately. The sense of discovery was just being on the ground and leaving space for a bit of improvisation.

For example, we happened to be in Trenchtown, and this gentleman standing the corner asked us what we were up to. We said we had this project, and he said there’s this guy, Michael “Mikey” Smith, you have to talk to. He wasn’t on any formal lists, but once they said this guy grew up playing with Bob it was a done deal, we had to track him down and get him involved. In turn, Michael opened up his neighbourhood and gave us so many anecdotes that would be lost if it weren’t for contributions from people like him.

What an amazing discovery!

Yeah. It’s one of these moments where you open yourself and try to be as present as possible. And not be too hard-nosed or stubborn about where you plan on seeing your day going. At one point Michael mentioned: “Do you see a flat over there?” It was the place that Bob lived with Bunny Wailer! And we’re like: “That’s not on the tour.”

We go over and upon weaving through the neighbourhood and landing on this two-storey building, we come across a bunch of women out front on a stoop, braiding hair, and across the way there’s a table full of boys playing dominoes. The women politely said that they didn’t want to be filmed, but when we asked the boys, they were all about it; they’re full of life, posturing for the camera, and it was really fun to be in that space.

It’s one of these moments where you open yourself and try to be as present as possible.

I asked one of the kids if he knew who lives in that flat. He said “I do” and I asked if he knew who grew up there. He nodded and said: “Bunny and Bob”. We asked him if we could check out the flat and he had us up. That’s the scene where you see the young man watching the TV and there are kids on the bed behind him. It’s things like that that are extremely valuable for me; they’re not necessarily anecdotes that need to be fully explained. We just captured a bit of history in that scene, and we were able to work that in as part of our narrative.

What was it like being able to cut the movie or think about the movie when you know it will be scored by some of the best music ever written?

There was definitely a moment for me. One of the realest moments was when I received the Legend stems. I was basically just sitting here at my computer. I cued up one of the elements. It was the vocal element. It was playing and I thought that my headphones were disconnected, then all of a sudden, Bob comes wailing into my ears. It was just his voice and you could feel the timbre of the room, and you could hear all the imperfections covered up by all the accompanying elements, and I just burst out in tears. It’s a serious mission. Bob’s mission and the way in which he framed his mission and his music, is, I would argue, unlike any other musician or musical artist we know. I can’t think of another artist that was technically making real spiritual music but was also so much more than that. His message broke through, and you don’t hear people call it “oldie’s music” — it still rings true and feels contemporary today. He really transcended the medium. 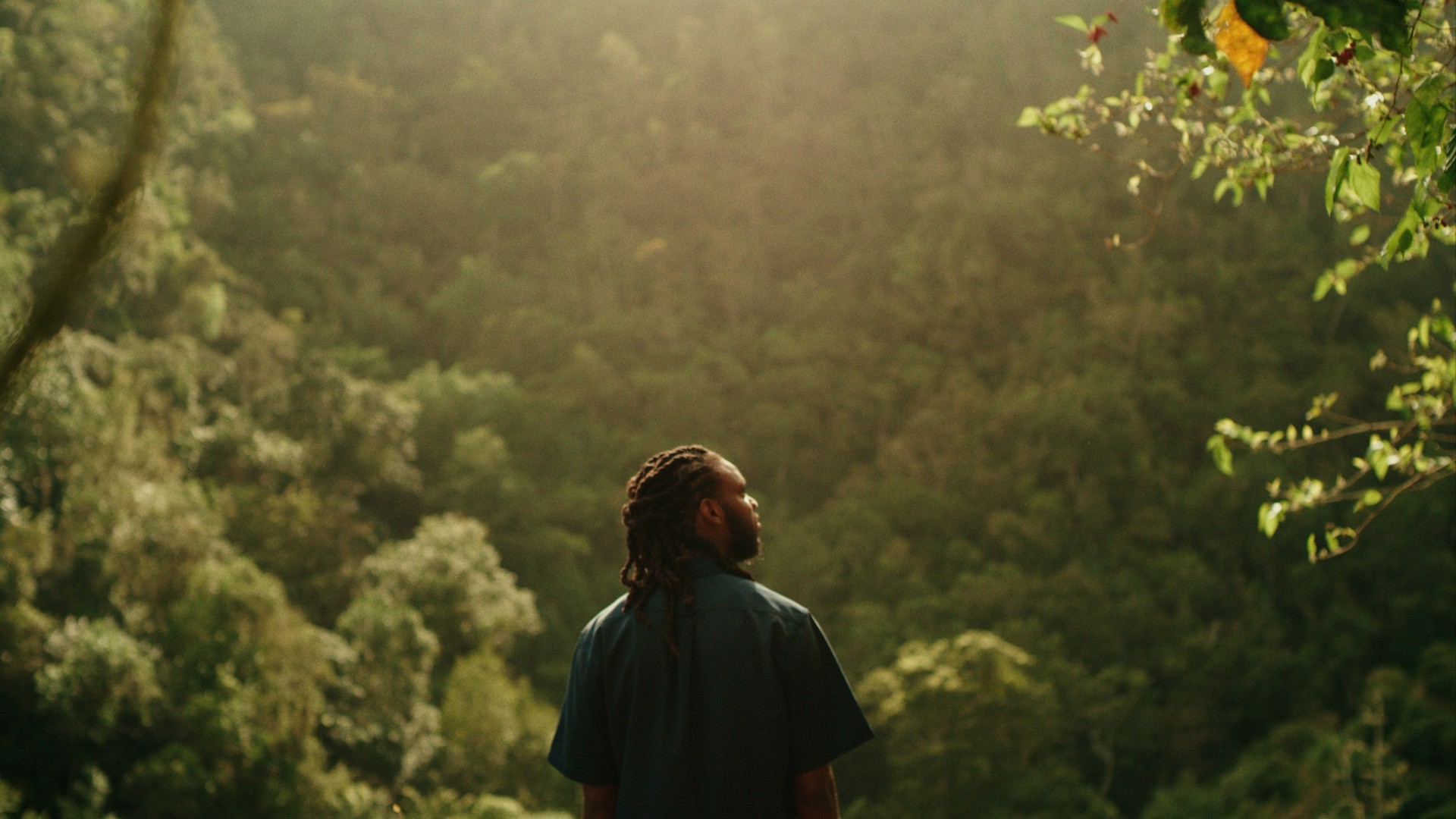 And finally, what does the music of Bob Marley mean to you?

I think the message is really about hope in times of adversity, to rise above and to resonate. Even that notion of Tuff Gong is so valuable. A gong is an instrument that is basically a hardened piece of steel that’s hammered and hammered into shape; it goes through so much abuse as a material before it can take shape. And once it takes shape, how do you get sound out of it? You continue to beat it and it resonates, this beautiful sound. I think that’s what Bob offered the world, is that through all the adversity he was able to rise above and offer a road map for people to do the same, to continue to champion the positive vibration and to resonate loud.