In 2014, Leeds City Council in collaboration with the West Yorkshire Police set up a managed legal Red Light District in the heart of the city in order to protect the safety of women working there. The opposite effect has occurred however, with the number of rapes and murders in that area going up. Coz Greenop, a Leeds local, was drawn to the stories of the women working in this area and has carefully created a short film that reflects on the depth and breadth of the sex worker experience. We talked to him about gathering the first hand experiences of working girls, crafting a visual aesthetic true to the subject matter and securing a killer score via social media.

What drew you towards making a film with a sex worker at its centre?

I’ve made three horror features. I wanted to get away from that side of the industry because I think the market has become very saturated. For a long time I’ve wanted to do something that has some kind of social realism. All my previous movies have been about real issues but with this, I wanted something close to home and where I’m from in Leeds.

As I started doing my research, I discovered that Leeds is the only place that has a managed approach to prostitution with this legal Red Light District that was set up in 2014 by West Yorkshire Police and Leeds City Council. I was shocked that it was still legal. I went down to the Red Light District and talked to a lot of girls to see why they did it. It isn’t the glamorous life you see on TV. None of these girls wanted to be there. It was just a way for them to get quick money because of drug abuse. I thought that it was interesting that a lot of these girls had businesses like hair salons or nail salons, and were now literally there to survive their drug addiction. I thought it was crazy that rather than the police helping these girls with their addiction problems, they tried to make it safer for them to sell their bodies, which I thought was a really backwards way of dealing with these issues.

How did you try and incorporate these perspectives into the screenplay, especially as a man telling a woman’s story?

Sweet Street is actually based on a feature length script that I wrote with a woman. We actually met up with these women, and a lot of the stuff that they told us is in the early drafts of the film. But when we took it to sales agents they were like there’s no way we’re going to finance this film because of some of the stuff that goes on. So it’s very much a PG version of what happened, trying to maintain the integrity of these women’s stories. What you see is a culmination of six or seven of these girls’ stories.

There have to be those moments of pathos, humour, irreverence and joy.

What I like is how it balances hope and despair in quite a fascinating way. Did you want to create this human tone throughout, so it doesn’t turn into a grim, didactic tale?

Yes of course. With these girls it’s not all doom and gloom. I didn’t want the audience watching the film to come out feeling drained and depressed. At the end of the day it is cinema. There have to be those moments of pathos, humour, irreverence and joy.

The unique tone of the film comes out a lot through the music, with this cool synth soundtrack, which adds a different dimension to what people might expect from the story. Why did you go for this kind of music?

When I was writing the feature length script, I was watching a lot of Nicolas Winding Refn films. Some of the tracks are written by his nephew Julian Winding. I started listening to a lot of his albums. In true indie film style I saw that he was on Twitter, started following him, and I basically just slid into his DMs and said: “Your music is inspiring the script I’m currently writing. Would you like to do the music?” And he amazingly messaged back and said: “Absolutely I’d love to.”

As I was writing the short film, I sent him over scenes and he would send me tracks every week. Music has always been an incredibly important part of my movies. For something like this I wanted this dirty house music, this dubsteppy kind of thing, which is actually very popular in Leeds at the moment. I wanted it to be fresh and raw, and I think Julian really nailed it on the head here.

I think we probably would’ve saved half our budget if we shot on digital.

There’s a left-field switch from night-hawking to the next morning in an aquarium. Why did you pick this location for your film’s meet cute?

Back in 2018 I learned from Blue Planet about this fish called the Kobudai. It’s a male fish that in order to defend itself turns into a female fish — who are the dominant species in this world. I started looking at these hermaphroditic species who change sex to protect themselves and became a product of their environment. I just really liked that metaphor.

Sweet Street is quite a gritty film. How important was it to use a 16mm camera to capture that grittiness?

I wanted it to feel dirty and raw, certainly like the environment we were working in. I think that if we had shot it on digital, and made it kind of glossy, it would’ve overshadowed the realness of this world, maybe even glorified the subject in terms of making it look like a glamorous place. Obviously it’s not, but with these neon-drenched, rainy northern towns, it can actually look quite beautiful. I wanted to keep it dirty and almost put smudges on the lens. I think we probably would’ve saved half our budget if we shot on digital, but we had to do it. 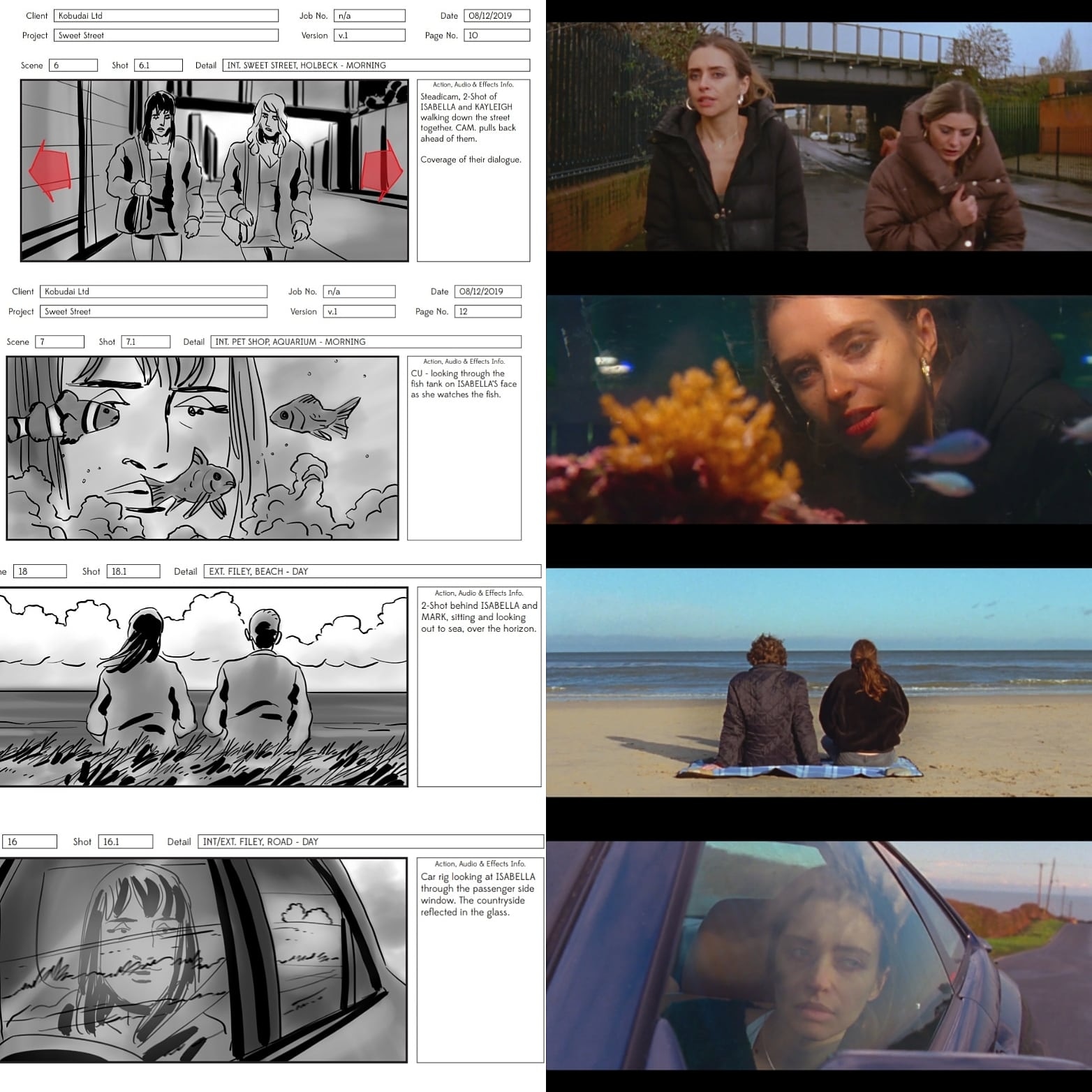 And the locations look great. Are these all authentic spots?

The street these women work in is actually called Sweet Street by the council. I was really keen to shoot there. The girls start working at seven at night and can be there until six in the morning, so we worked around them. When we were filming the police came and said “you are aware that you’re filming in a Red Light District” and we said, “yes, we’re perfectly aware”. Leeds is a very old and industrial town, and I think there are some cobbled streets that could’ve looked a lot prettier, but I was like, if I can get permission for Sweet Street, that’s actually where we’re going to shoot it. Luckily Screen Yorkshire and the Highways Agency and City Council for Leeds, allowed us to do it.

Sweet Street is doing the festival rounds now. I hope that build up hype for the feature-length version. Apart from that, I’m supposed to be shooting a gangster thriller in London in September but everything keeps getting pushed back so it’s a frustrating waiting game. I guess like most creatives during Covid, it’s about trying to stay creative.