Inspired by Black Mirror, Ignas Laugalis’ music video for Cork artist Beyond the Wash sets retro-wave music to a strange VR landscape. Featuring striking dance choreography, memorable sets and production design, and an interweaving narrative blurring the lines between reality and fantasy, the entire film was created for a mere €2,500. We talked to Laugalis about the collaboration, creating a big feel on a small budget, and the ways editing can change a piece entirely.

How did your collaboration with Beyond the Wash come about?

I’ve worked with the dancer Andrea Williams a few times. She teaches dance classes in Cork. Patrick (behind Beyond the Wash) was one of the people who took classes at her dance school. Andrea is this amazing artist and Patrick was looking to do a music video so she told him to look into my work. A few months went by and they came back to me with the dance choreography already planned. They ask me to make a story out of it.

What ideas came to you when you first heard the song?

It was interesting because the first idea that came to me was completely different from how the music video came out. My initial idea was actually set in an 80s or 70s style roller rink. I came to him with the idea and he was like “I’m actually looking for something a bit darker.” So I said I’d come back to him.

Social media has made us so self-obsessed that we don’t really try and think about other people and how they see us.

It probably had to do with me watching a few Netflix TV shows at the time, like the last season of Black Mirror and Maniac, so my headspace was automatically in that VR world. I thought this could work really well with the dancing as it would be a great reason why these choreography elements could be put throughout the song.

I definitely picked up on a Black Mirror vibe. Did you want to make a similar comment about how people use technology to escape the mundanity of their everyday lives?

We initially wanted it to be that he gets lost in the VR world, and he’s not sure what real life is and what virtual reality is. But as soon as we started developing the character, we thought about how he might be isolated in this dystopian future where there’s never any human contact or interaction. What I always found interesting is that in real life people can have interactions with each other, and if they have this relationship, both parties can come away with completely different experiences. I think it’s to do with the fact that social media has made us so self-obsessed that we don’t really try and think about other people and how they see us. I was really just pushing that to almost an extreme level where the guy completely imagined how the relationship was when in reality, it was a completely VR-dating world where he is almost stalking her in a way. 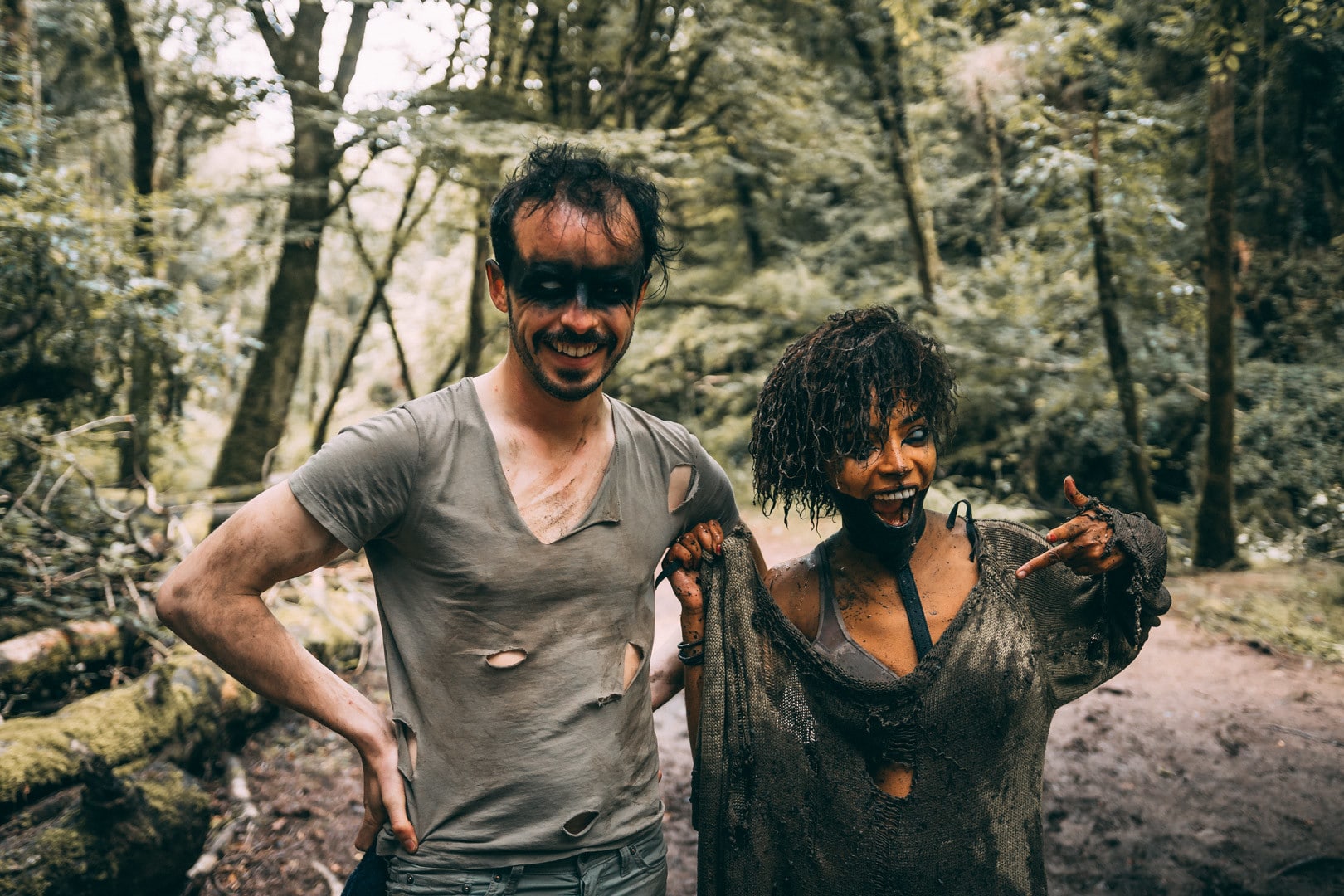 The film was made for just €2,500! What did you do to make it look so impressive on such a small budget?

A lot of the locations were shot just using natural light, making it just a case of pushing the grade a bit more to stylise it and make it more interesting. We used an Ursa Mini 4.6k with basic telephoto lenses, so it was a very minimalist set up. When I work on my more commercial work, I do have these bigger, fancier cameras with nicer lenses but you’re always more constricted for time and what you’re able to do. It’s always nice that when you get to do these more creative pieces you have more time to experiment with angles and movements.

Both characters dance in an amazing-looking pink-washed forest scape? How did you go about creating that?

The budget wasn’t so big, so we thought about how we could be economical and show normal things in an abnormal way in order to get across this virtual reality. I looked at how other people did it in their music videos and it seemed to be a normal enough thing to make the grass pink or purple; I thought this might be a great way to help the story element. My Colourist Neveen works with very visual, colourful colours. He’s based in India, and not to generalise or anything, but Bollywood is very colourful, with over-saturated colours, so I think he had a great time working on it.

We had to shoot late at night because Cork has a pretty big nightlife and there are always drunk people walking around asking you questions.

One production day lasted 25 hours! What was that like?

That was a really crazy day. It wasn’t a 25-hour shoot for everyone, but it was just because there was so much that needed to be done on the last day. It started off with me waking up at about ten or so. Patrick came to collect me and we brought all the gear and props. Then he left me there for a few hours as he had a gig that day. Then Matt, the art director, came out to help, as he was still finishing off the VR. So a lot of that day was spent setting up the room and the computers and making sure the visuals were right. We only started shooting around 8 or 10 PM when it was getting dark as we needed it to be nighttime. I shot through the entire night to get this darker atmosphere across.

Andrea came over first, we got all her cutaway inserts and went out into the streets and caught more footage. Patrick finally came back from his gig at around 1 AM, then we shot his part. We were trying to be as economical with time as possible, but it was just a very long night. It’s funny because when you’re doing something and you’re so in the zone and just drinking your Red Bulls, you don’t notice time passing. Additionally, we had to shoot late at night because Cork has a pretty big nightlife and there are always drunk people walking around asking you questions.

How challenging was it in the edit to cut between these fantasy and reality elements?

I’ve always found that in the editing you’ve got another opportunity to add another layer of vision. Like no matter what you shot, you can take a new approach in the edit. I spent about two weeks straight doing night shifts in my office working on the edit so I could really get into the state of mind and flow of the thing. I wanted to hint at certain subtleties throughout the short, so when we do come back to the final dance sequences, it’s almost like you’re a bit disturbed and creeped out.

I do remember feeling a bit disturbed when I finished the first draft of the edit. I thought it was interesting that it was the first project where I felt a bit insecure about releasing it. But everyone I showed it to really enjoyed it. So maybe it’s a good inclination to let yourself go into this darker space that you wouldn’t normally let yourself get into and see what you can create.

What are you working on next? I saw that the EP is coming out in a couple of months.

I recently met up with Patrick and Andrea and we definitely want to push it even further. We want to bring more people to collaborate on board. It’s very early stages this time. Additionally, I have a short film currently in edit and another music video locked and sent off for grading. Most of the time I’m doing commercial work, but I try and do as many of these passion projects I can as I feel like I learn more about the craft of filmmaking than when I do commercial work. I take what I’ve learned from these projects and apply them there.