From a very young age, London based illustrator/animation director Ivyy Chen developed an obsession with chairs, casting the four-legged rest stops as stand ins for stories which address the complexities of human existence. In her latest film isle of Chair (椅島) Chen situates a variety of different chairs within a gentle animated sci-fi context as a beautifully crafted metaphor for the challenges of living with feelings of anxiety and depression. We caught up with Chen to discuss drawing on the experiences of her friends, creating a slow and contemplative sense of animation, and how she believes chairs are like people.

What are the origins behind the idea for isle of Chair film?

The main story was inspired by my life experiences seeing my friends under depression or anxiety attacks. That made me want to do something to try and help them. I thought that the only thing that I could do would be art or animation that would make people feel like they are not alone in a situation like this.

It’s a way for me to tell stories about humans through chairs.

The film is very gentle and creates a calm space. How challenging was it get that tone across in the animation?

One of the things I worried about making the film is that it would be too slow for some people. When people think of animation the movement can be quite cartoony. I wanted every moment to be quite quiet, quite slow. The feedback I gave to the animators was: “Can we slow this shot down to at least twice the pace than it looks at the moment?” I think making slow animation is more difficult than making something really fast because you really have to see the shape and then the movements.

It’s not your first film about chairs, what draws you to animating these objects?

I starting making stories about chairs in high school. It was actually a class assignment, I think we were asked to draw a chair in our drawings. I felt that the chairs and how they’re placed reflect how I see myself. At the time, it was a lot of pressure. You have to have good grades, especially in Asia. I was having a lot of doubts and then I starting drawing. A lot of artists draw themselves in their art. I tend to just draw something that can represent me, but people don’t have to see me. I think it’s a way for me to tell stories about humans through chairs.

I feel like it’s a film about being out of place then trying to find acceptance, stressed through the compositions. Then by the end, the colour of the film itself changes from blue to pinkish orange. Did you want to create a kind of abstract journey here?

I feel that it’s important for me to try and send a positive message throughout the film. I feel that the whole film is a journey so that people can come in with a bit of low mood then when they’re watching this animation it will lighten up their day a little bit. I think a chair seems to be an object that needs to be functional. If you don’t sit on it it’s basically useless. I think that’s how society sees humans. You always need to be functional when sometimes it’s OK to take a break. It’s almost like putting a chair down and saying: “I need a break and I’m not doing this any more.” Then when you’re feeling better you can leave your chair up again.

So might draw a comparison to someone with depression; they might not be able to get out of bed one day, but they’re still human? 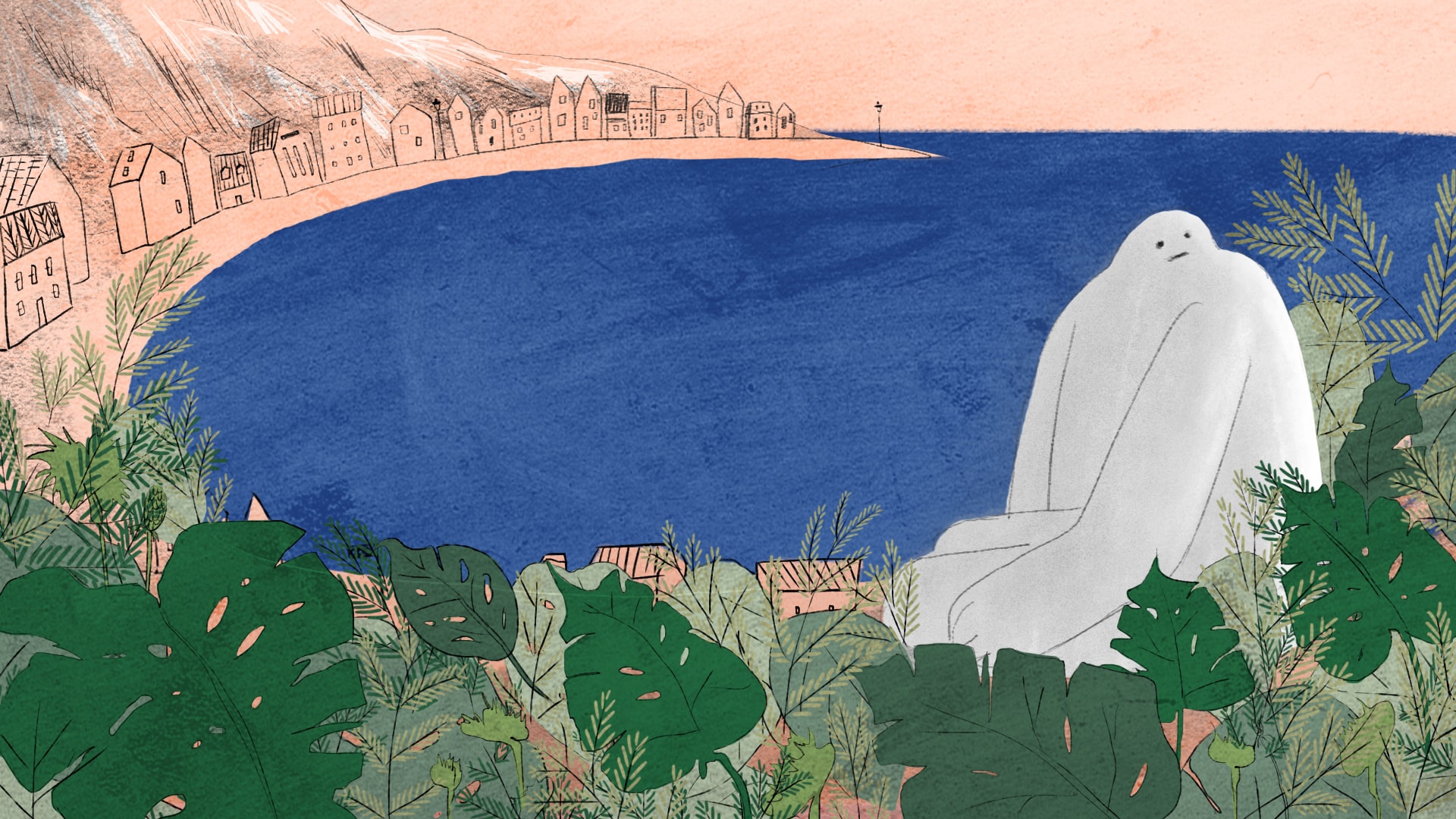 What was your animation process?

Most of the shots were done on computer. The design was done in Photoshop while the animation was done in TVPaint and the compositing was in After Effects. But there is one shot on paper. It was the shot when the giant falls down and then everything goes black and a chair starts growing and forming in the short. That one was done on paper because I really wanted to get the blurry texture of the charcoal. I did it all on paper and scanned it.

I think making slow animation is more difficult than making something really fast.

When you draw a chair, do you pick from certain images you’ve found or have you visualised them already in your head?

I have been taking lots of pictures of chairs when I can. It wouldn’t be just the chairs from shops, it was more like abandoned chairs out on the street. I think it helps; it becomes a reference in my mind when I do the design.

The white giant seems like a combination of the robot from Big Hero Six and the Iron Giant. Were these inspirations at all?

A lot of people told me that the giant looks like Baymax! That wasn’t really the intention. I think I wanted to draw something that looked a bit fluffy, really friendly and really warm. I think the giant in this story tries to fix something that could also be when someone is under a mental health attack and they want to lift themselves up. They keep telling themselves they should be functional. I wanted the giant to seem really innocent. But in terms of the Iron Giant, I definitely looked for a reference photo, because it’s hard for me to imagine what kind of perspective a giant could have. I definitely looked to the film to know what kind of layout would work well for this character.

isle of Chair is one of the many great projects shared with the Directors Notes Programmers through our submissions process. If you’d like to join them submit your film.