Utilising archival footage from throughout hip hop artist Nathan Nzanga’s life, Enough from Director Caleb Slain (who we last saw on DN with moonlit short Demon) documents his journey as a young black teen growing up as part of a politically fractured country. Enough, however, is so much more than your typical music video. It’s an ambitious and exhilarating film-come-musical that spans a lifetime of personal growth and cultural trauma. This is the story of modern America and Slain embraces a dream logic to confront Nathan’s most conflicted thoughts on policing, acceptance, and grace. DN caught up with Slain, who walks us through his production, revealing the fundamental bonding his crew did in preparation to take on Nathan’s story, and his desire to create art that encourages mutual understanding.

How did you come to work with Nathan Nzanga?

We met through Prodigy Camp, which is an film/music summer camp we both mentor at. Nate actually came through as a camper years back, and the camp is where he wrote the first song in the film, Truce. Also, the camp founder Rick Stevenson and our main producer was the one who interviewed Nate over the years.

This project never could have happened without that sort of cultural bedrock. The subject matter is far too sensitive to survive a typical film production.

Did you approach him with the concept of utilizing footage from his life or was it vice versa?

Neither. I didn’t know about the footage. Nor had Nate ever seen it. In fact, the first time Nate saw that footage was when he watched the first cut. That took a lot of trust. A lot of bravery, on his part. A sort of bravery I don’t myself possess. I would never agree to let a filmmaker go through intimate tapes of me growing up, in some cases discussing very personal fears and experiences. That’s Nate’s radical vulnerability, which I’ve learned a lot from. It also speaks to the culture of vulnerability at Prodigy Camp. At camp, the whole community is built on vulnerability, learning to talk about the hardest experiences of your life, trusting others around you to be there for you, and bringing that truth back into your art. This project never could have happened without that sort of cultural bedrock. The subject matter is far too sensitive to survive a typical film production. We’re sort of a family built over many years who decided to make a movie.

What were you excited about exploring thematically?

I wanted to know if, during the most polarised period in modern America, a film could make people drop their armour, their defences, their spears. To not feel attacked, but just feel. Feel so much that politics start to fall away. To feel with each other, and go from there. Art should focus on individual experiences, and stop normalizing absolutism.

It’s a really ambitious and impressive video. How did you set about putting it all together from a production standpoint?

Producer and camp founder Rick liked to whisper “scope creep” like the ghost of filmmaker past. Honestly the project didn’t set out to be super ambitious, but so many of our team are great filmmakers in their own right and want to make great work. We’re always in it for the art, but on this one we especially wanted to do justice to Nathan’s story. Our main production producer Ethan Senekar went through Prodigy Camp as a teen and is an excellent DP and writer. Hadley Hillel our production designer also went through Prodigy and is a writer/director with a meticulous sense of set design, this was his first time PDing for another director. Hope Alexander our producer/1st AD went through Prodigy and is herself a talented documentarian. All three work as mentors each year at the camp, as well as myself, so we’ve developed a bit of a culture around trying to make whatever films we mentor as great as possible. All that got applied to this. But the truth is it blew way out of proportion, starting with Karen MacDonald at Koerner Camera essentially donating an outrageous camera package to us five days before we started shooting. From there, things escalated quickly.

How did you find directing Nathan? He seems to exude a natural charisma.

You know, the first time I ever saw Nathan in real life he was blowing up a stage like a scene out of a movie. It was like he was performing for an arena, with maybe only fifty people in the audience. So yeah, I trusted he could bring it heat, but the acting required for the second half of the film concerned me. I knew if it was even slightly off-key the whole thing would fall apart, so I asked Nate about having an actor play him. To his credit Nate was open to it, but Max (one of my producers and the director of Prodigy Camp) pushed me to trust Nate. Never have I been happier to be so wrong. Directing Nate was minimal, only when we were sorting through intent (the opening scene on the couch took us a minute to find the right emotion). Besides that, I mostly got out of his way. His instincts as an actor are incredible. Maybe in part from his time in theater and musicals in high school. But I have a big role in mind for him in the film I’m currently writing, so it’s likely not our last collab.

I wanted to know if, during the most polarised period in modern America, a film could make people drop their armour, their defences, their spears.

There’s a lot of power and emotion in the police scenes both lyrically and visually, which are executed incredibly. What conversations did you have when shooting those to ensure you’d do the subject matter justice?

“TALK LOUDER.” “DO IT AGAIN, LOUDER.” “I SAID LOUDER.” “RESET — LOUDER.” “ONE MORE TIME…..ONLY THIS TIME ACTUALLY LOUDER.” Jokes aside, yes, I asked Shawn who played the cop to do his lines louder, but honestly I didn’t breath a word of direction to Nate for that whole scene. Nathan had that moment in him, and I just got out of his way. 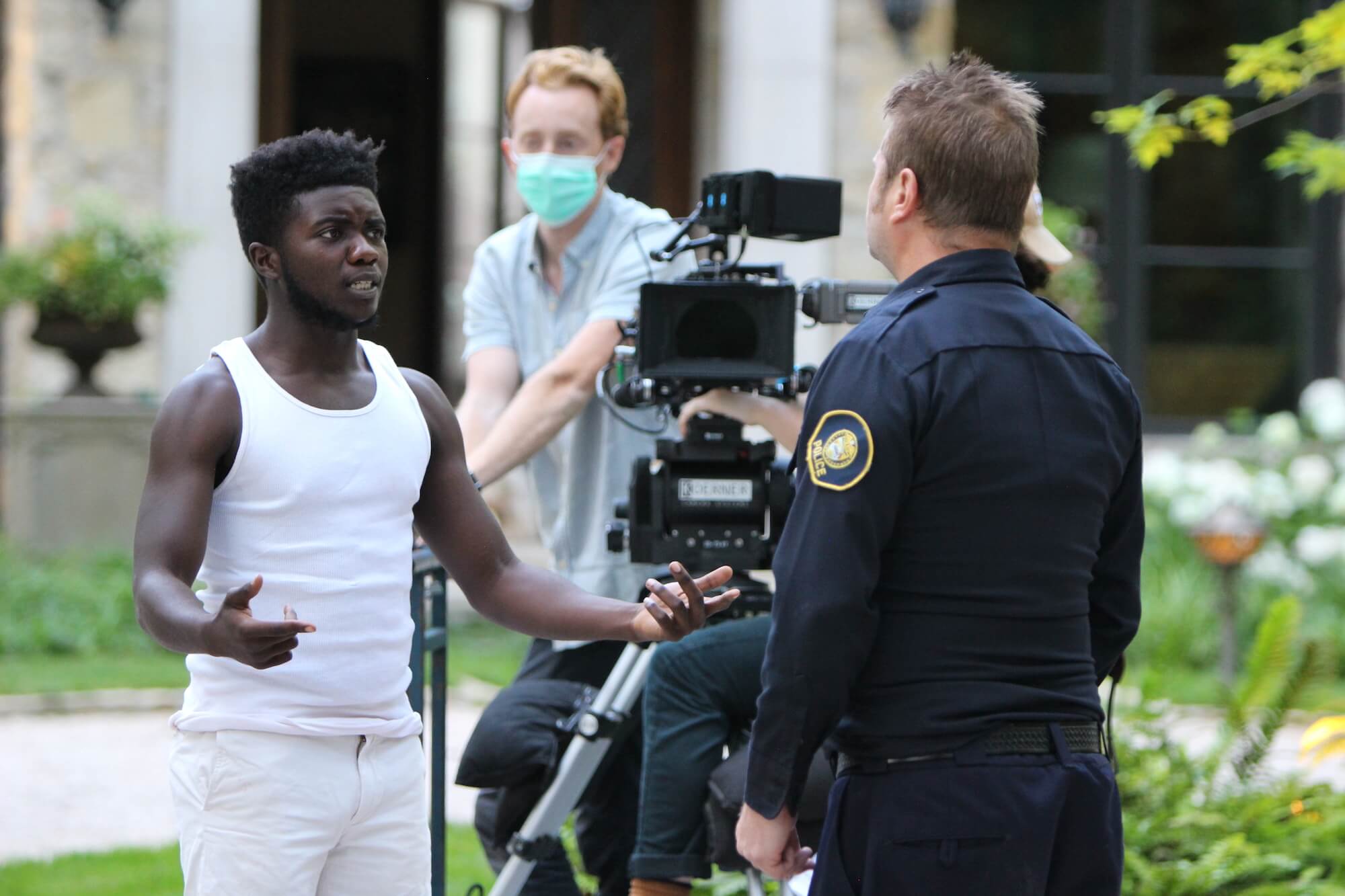 Kinda depends. Recently finished a mini-series pilot about the WWII mission that ended Orson Welles’ career. It was years of research but might be a little too big for me to get backing for now. Last year wrote a pilot for a medieval fantasy about an asexual slave painter’s rise to infamy in a world where art is outlawed. It got great responses from execs, but COVID and election exhaustion made an ambitious, and very morally subversive, show hard to get rolling for a first timer. So I’m currently writing a movie about a teenager who finds an ominous VR system while facing life in prison for murder, and the quest for spiritual redemption it leads him on. If the first two don’t find their footing, I’ll circle back after making the third.

Enough is one of the many great projects shared with the Directors Notes Programmers through our submissions process. If you’d like to join them submit your film.