Long-time Directors Notes alum Tony Comley makes a long overdue return to our pages with another animated gem, this time in the form of music video Time to Recover for harpist Serafina Steer. Comley accompanies Steer’s gentle, harp-centred song with a video of spiders spinning a harmonious web and, as the song begins to ascend, so does Comley’s animation as it ventures forth into the night sky. It’s wonderful display of peaceful filmmaking yet Comley’s process of developing it was anything but. We caught up with the animation director to hear about the journey Time to Recover took over the course of the pandemic, and how Comley’s desire for self-improvement inspired its zen visuals.

How did working with Serafina and creating the video for Time to Recover come about?

The project began two years ago when Serafina shared with me the secret un-mastered tracks of an impending album. I fell in love with it and in particular a track called This is My Emotion, which brought to mind a relentless silver train. I sketched a storyboard and started animating my favourite frame, which was an aloof passenger flicking away a glass of champagne.

This is My Emotion passenger storyboards

Production was going well until I was asked to animate an elf for Manchester trams at the same time as my wife became pregnant. I suddenly needed money and so vowed to devote my evenings to finishing the music video by the album launch. I broke this vow.

I saw spiders flitting across webs that are plucked like a harp and got excited in a way that I knew would sustain me through late nights.

The train idea grew lukewarm but the champagne lady lingered. I set about writing a scaffold for that shot and settled on a convoy of abstracted race cars mixing the drink. It was a terrible idea that I spent a lot of time on. Suddenly it was February 2020 and I was stuck in China at the wrong time in history.

Did being in China at that moment shift the nature of the project?

We were near the epicentre of the virus and forced to quarantine in a £175 a night hotel for three weeks. It was there that I had the thought of a family house being catapulted through the sky. I wrote a segue to the champagne lady and ploughed through the scenes while my money ticked away like the hit points on an RPG goblin. I returned to England with some posh slippers and two minutes of animation.

This is My Emotion house storyboards

At the same time the Imperial War Museum wanted an interface for a satirical future immigration booth and it seemed a cool way to earn money. I vowed to finish the music video in the evenings and I broke this vow too.

The lockdown arrived and sank two upcoming projects worth £10,000. I focused on hunting commercial work but didn’t want to drop the music video so I chose a shorter track and a much simpler visual style that I could finish in a week or so of evenings. Two months later I was staring at one and a half minutes of very clean and boring motion graphics. I was suddenly upset enough to have a good idea.

I saw spiders flitting across webs that are plucked like a harp and got excited in a way that I knew would sustain me through late nights. The track is called Time to Recover and I still haven’t asked Serafina what it’s about. It was written long before the pandemic, so it’s resonance is coincidental but for me, it brings up the urgent need to repair my personality as I’m passing it on to my son. 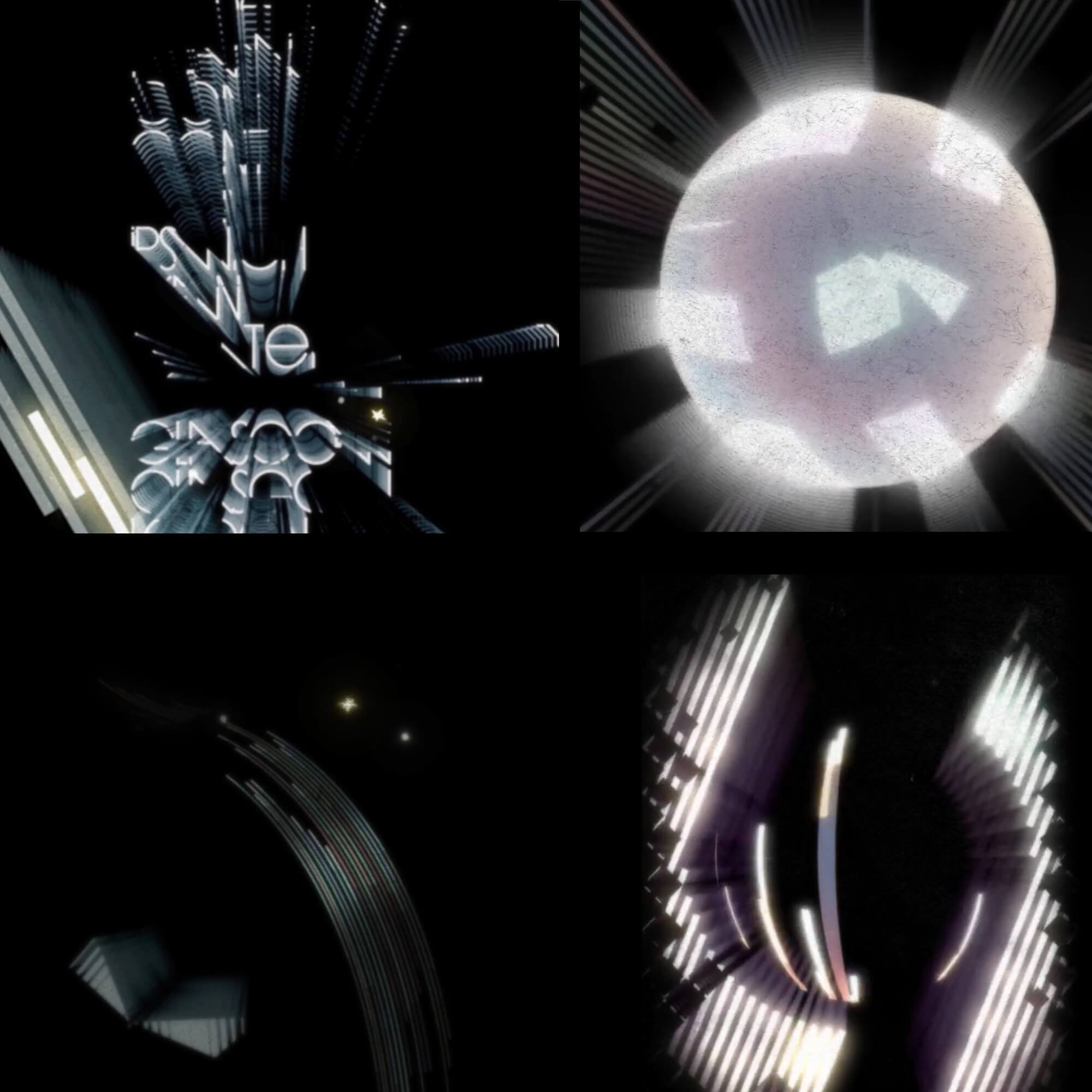 Are the spiders and their webs representative of that search for personal growth?

Webs and spiders are not a deep expression of that. I was just drawn to the possibilities for movement but, to me, the squeamish navigation of a scaffold happens to evoke a recovering mind. At this point I was asked to direct a documentary episode for Netflix about mindfulness. I needed the money naturally, so I vowed to animate spiders in the evening and finish the music video in a couple of weeks. I broke this vow as well.

What drew you back into the project to finally finish it? Also, when did the space element come into play?

I did manage moments of spider time but two weeks turned into ten months, during which my ceiling caved in, I had a daughter, moved to Crystal Palace and weathered the pandemic with everyone else. The spiders wrote themselves naturally across many stolen evenings and at some point Serafina said the word “cosmic”, so I had fun animating moons with the same velocity as bees. My son loves to watch it and hopefully so will others.

How was it animated from a technical standpoint? What tools and software did you find yourself using, and why?

Everything was animated in Toon Boom on a Surface Pro. The Surface Pro has crappy pen technology which produces a jittery line whenever you draw carefully. The only way around it is to draw fast so I used it to force myself to be loose and expressive. Backgrounds were made in Photoshop and were simple blurred scribbles. That aspect gave me the most pause. The first tests were just a black background with a white web and it looked great but I’d been playing a lot of Mario Kart 8, which is a really satisfying kind of vibrant so I was hankerin’ to make things look pretty. I composited in After Effects and recorded a RAM preview off the screen with my phone then inserted that footage on top of what I’d just played. It softens the lines and bleeds the colours into each other in a way that would make Mario Kart proud. 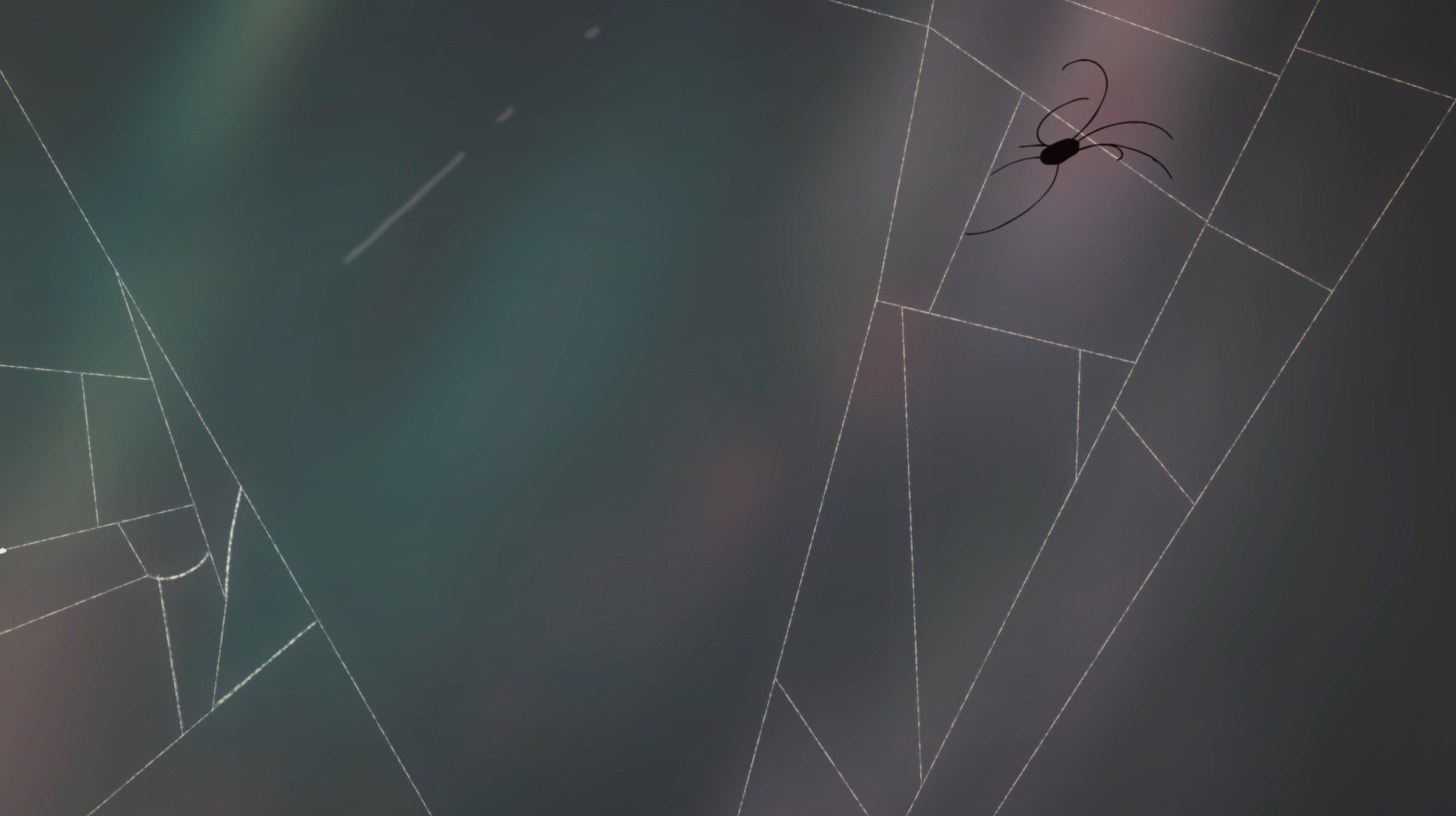 What was it sonically that you connected with in Time to Recover that you wanted to bring out in the video?

My choices were mostly unconscious but in retrospect, the texture that comes through in the music is a kind of relentless delicacy. Most things in the video are fragile but ancient and furtive and unchanged. I feel like I’m using a lot of adjectives to say “Harps bring to mind spider webs”.

To me, the squeamish navigation of a scaffold happens to evoke a recovering mind.

Do you think the chaotic nature of what you had going on around you last year with work and life drew you to create a video that was more peaceful?

I think my children had the biggest influence. Kids make you scan a room for small and gentle objects of interest, so things like spiders have been on my mind. The other big influence was a chewing gum ad. I was asked to animate particle effects like water splashes, speed lines, etc. and I loved it. I looked for fun analogues and found that spiders, flies, lightning and the like are satisfying to animate in the same way. Lots of little strobes, dashes and wobbles. The pandemic was not so much an influence as an opportunity. I suddenly reclaimed two hours of each day from what would have been my commute, so I had a shade more time to make personal work. 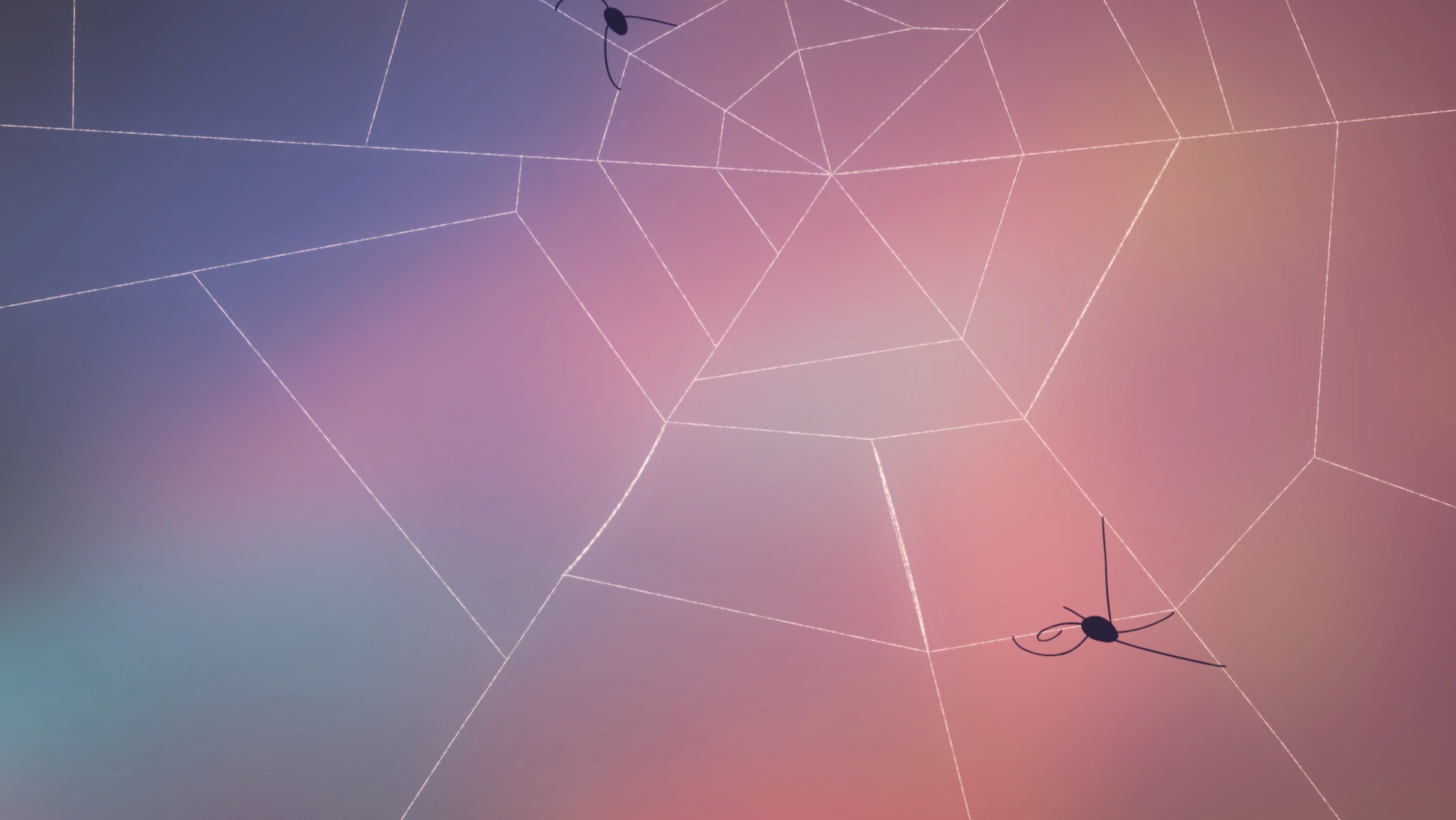 Did the start-stop nature of production require a different approach to a straightforward project to stay orientated?

The erratic schedule helped mitigate burn out and it was really helpful to get occasional distance from the project. The internal logic of the piece was hard to settle on and for a long time I was more reserved about what I could depict. For example the first draft of the finale involved loose, torn webs flailing in the wind, while planes glided across the background like swans. I was set on that until I came back after a couple of months, during which I had realised I didn’t have to be so solemn and I could just make webs with constellations.

And lastly, what animated projects are you working on at the moment?

I’m going to finish the other music video I started, the flying house for This is my Emotion. The idea is still fizzy and I already have about a third of it done. After that I want to write. I don’t want to say I’m writing a novel because lots of people say that and never do, so instead I’ll say that I’m NOT writing a novel.