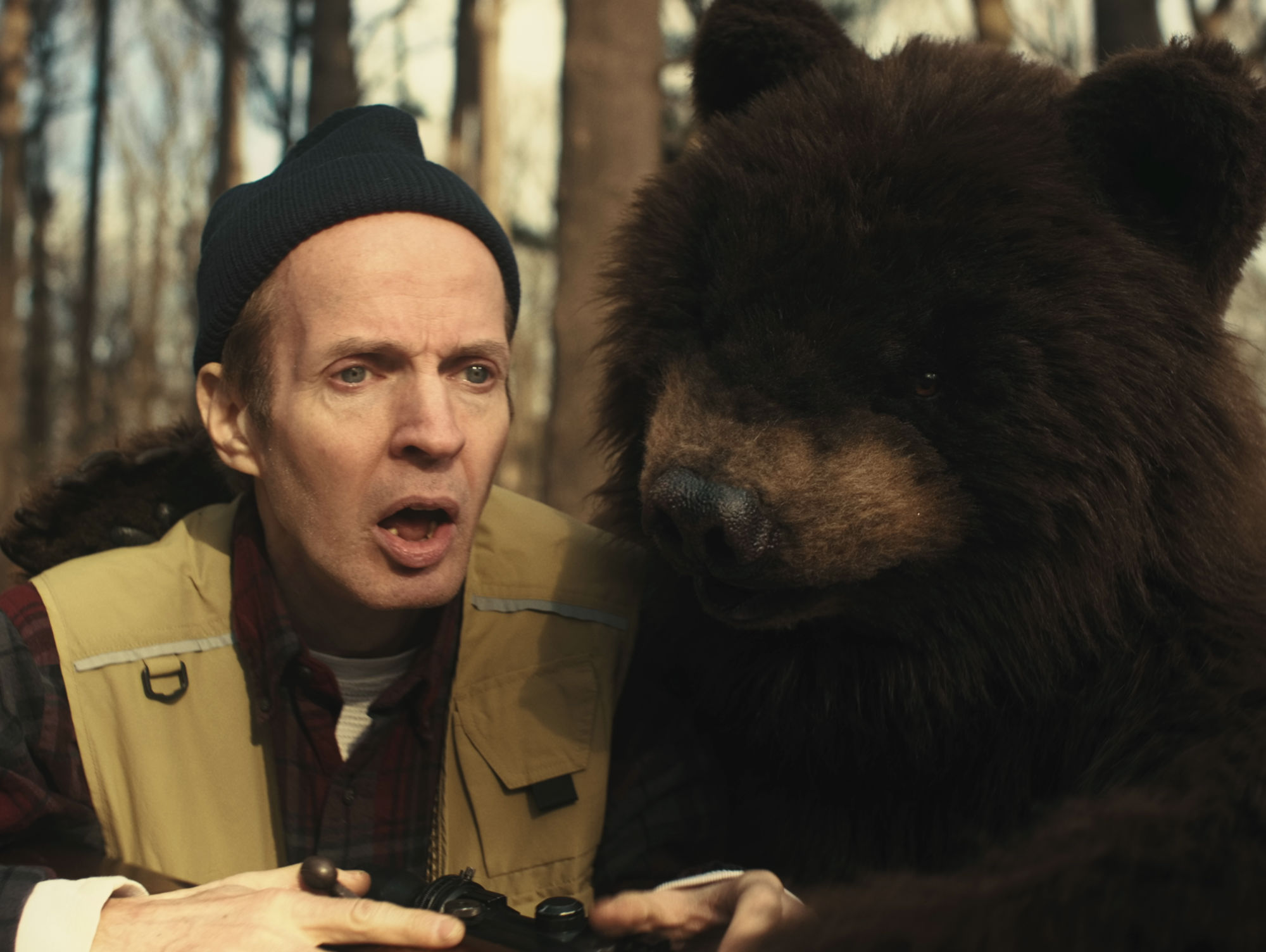 Whilst some may find venturing into a new form of filmmaking a daunting prospect, one preoccupied by concerns about the shift in working style that may be required, Grayson Whitehurst has earnestly launched himself into the move to commercial directing and most impressively, created several spec ads to demonstrate his directorial chops. Striking a comic yet foreboding note, his 90 second spot Purple | Life-Changing Sleep features a somewhat obviously fake bear boasting an ambiguous yet commanding voice as he guides his would-be killer into philosophical questions of morality. It’s a film which meets the challenge of presenting something appealing to a commercial audience while delivering a stinger that deftly ties back to the mattress brand. We invited Whitehurst to tell us about the nihilistic and complicated morality behind some of his inspirations and his advice for how to approach this particular form of filmmaking.

Where did the inspiration for this spec originate from?

I’ve wanted to make the jump to commercial directing for some time now. While I have one spot on my reel that I’m really proud of (a MasterCard spot that I co-directed with Jackson Tisi), the majority of my portfolio is narrative short-form. Prior to this spot, I think I’d imposed a narrative box on myself that was more destructive than constructive – I never thought the bizarre, genre-agnostic stories that I have a penchant for telling would translate well into commercials. That’s an unnecessarily pessimistic outlook to have, and there’s a universe of branded content that tells peculiar, fantastic stories.

The move to commercial directing is appealing to me in terms of fiscal potential and putting skills into practice more routinely. I’d love to be commissioned to do more narrative work, and there’s no shortage of those opportunities in the branded content sphere. The compact nature of commercials and branded content (30-90 seconds) also means the opportunity to produce work at a higher volume than if I were to solely devote my focus to narrative shorts and features. I’m a director just as much as I am a writer – while I love crafting stories behind a screen, I love working with actors and commanding a vision just as much (if not more). Simply put, commercial directing provides a higher frequency of opportunities for that to happen.

I never thought the bizarre, genre-agnostic stories that I have a penchant for telling would translate well into commercials.

Regarding the creative, the idea of an animal pleading for its life at the behest of a hunter is a concept that’s always been appealing to me (and something I’ve had dreams about before). Using that set-up as a starting point, I thought it would be compelling to explore the more philosophical implications of such an act – Who is the real monster here? If not out of necessity, do we kill for control? etc. – The yearning for an exploration of these elements shaped the spot’s existence as a morality play, and that development informed our cinematic approach. Bergman was a big inspiration here.

I thought this scenario was ideal in the context of a dream sequence. While I generally find the “it was all a dream” ending is a weak cliche, it’s a perfect set-up for a mattress commercial. The idea of a mattress influencing your subconscious by virtue of its comfort is a much more enticing product benefit to me than X type of memory foam or Y brand of technology. Enter Purple. 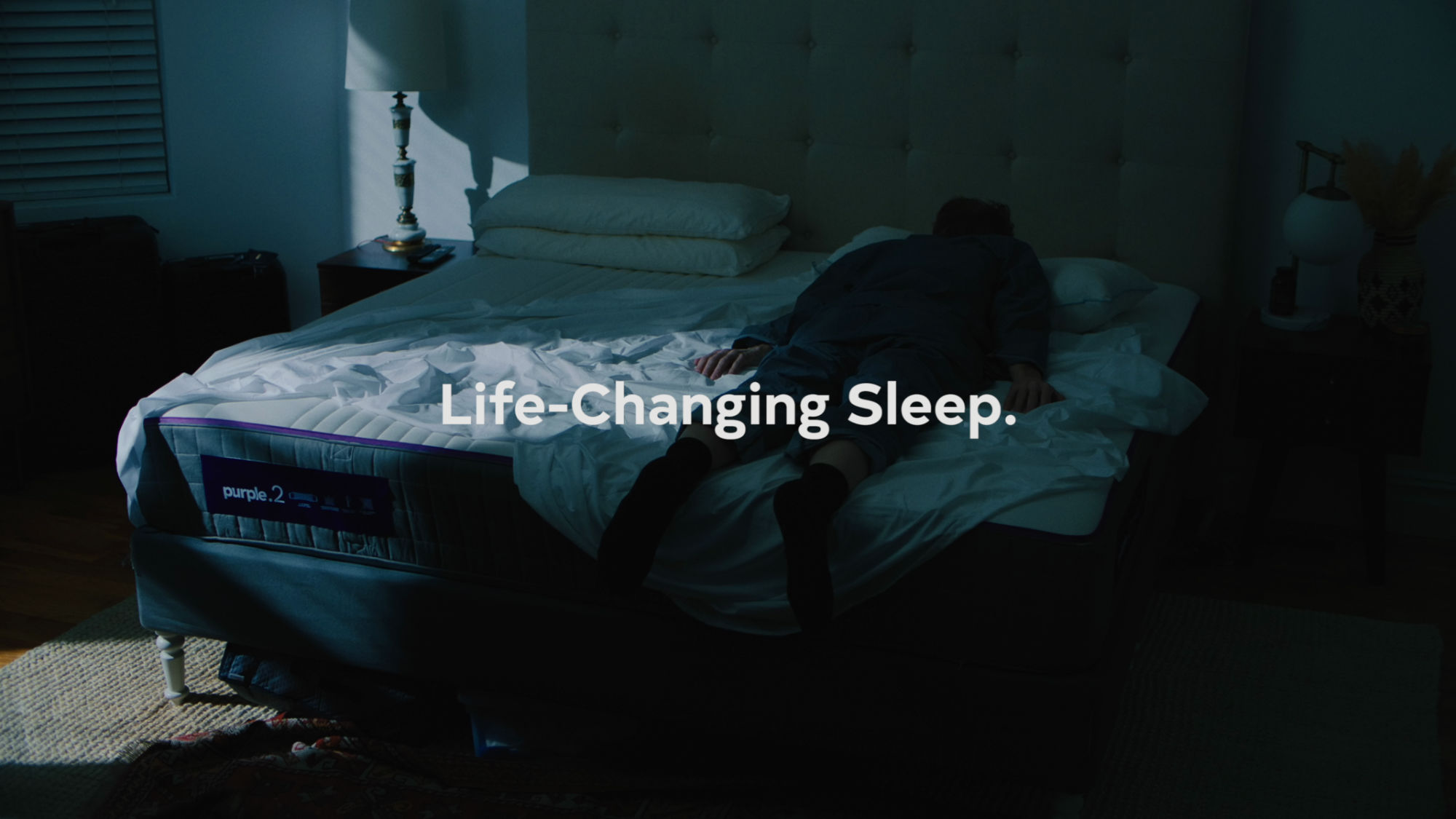 You mentioned Bergman as inspiration, who else do you draw influence from in your work?

Bergman was definitely the biggest inspiration for this spot down to themes and visual approach. I appreciate his take on morality and think it permeates my sense of creativity in a really profound way. Paul Schrader is another writer/director whose filmmaking sense (also rooted in morality) deeply influences mine. My taste and influences are constantly evolving, though – I used to swear by the work of more nihilistic filmmakers like Yorgos Lanthimos, Lars von Trier, Michael Haneke, etc…I still do, but my personal style doesn’t really align with their work. It’s not so dry – I think my work is shaping up to be more philosophical drama with elements of horror and comedy that ultimately has a lot of heart. Vincent Ward and Ari Aster come to mind.

While I generally find the “it was all a dream” ending is a weak cliche, it’s a perfect set-up for a mattress commercial.

How did the project move from conception into realisation?

I sent the final script to Armaan Virani (DP) and he loved the idea – we brought on Jake Goldfine as a producer and quickly got to work. We tackled pre-production as a trio which involved several trips to Forest Park (our exterior shooting location), several Zoom calls with Matt Brady (the man behind the bear suit), a lengthy casting process for the woodsman (until finding a perfect choice in Erich Rausch), sourcing/renting wardrobe and props (thank you El Ganz), building out the rest of the crew for the shoot, etc.

The shoot day went fairly smoothly. Although it seems like we’re in the middle of the woods, we were no more than a couple hundred feet from a park with high foot traffic. While this was a logistical dream in some ways, it was a nightmare in others. Location sound was virtually unusable, but post sound turned out wonderfully (shoutout Daniele de Virgilio). We also didn’t really consider how novel a talking bear would be in the middle of a public park, so pedestrian interference (people asking for pictures with Matt) became a significant issue pretty quickly.

We knew the location would present myriad unpredictable challenges (weather, people, etc.), so we were as intentional as possible with our shotlist. An ergonomic approach to production let us overcome these obstacles instead of collapsing beneath the weight of a superfluous, overloaded schedule.

Directing a performer like Matt was also something that was completely uncharted territory for me – we prerecorded reference dialogue that we played through a speaker and Matt would then match his mouth movement to the dialogue. Performance adjustments were certainly more banal than that of a traditional actor.

Regarding post production, I knew that I wanted Alexia Salingaros to color it and she put me in touch with Daniel Boventer, her producer at Ancillary Post. Dan suggested Daniele de Virgilio to score and sound design the spot. It was nice to handle everything under the same roof as it made the post process fluid and synchronized.

What equipment did you use for the shoot?

We shot the project on Alexa Mini. We used Canon K35 lenses for the dream sequence – they produce a soft circular bokeh and gorgeous flares that we thought would bode well with such a surreal setting. We switched to Cooke S4’s for reality, which offered a super sharp image that contrasted the softer look of the dreamscape. It’s also worth noting that all of the movements in the dream sequence were accomplished with a Fisher dolly.

One thing I’d also like to mention is the change in aspect ratio. We chose 4:3 for the dream sequence to reflect the woodsman’s narrow perspective, whereas the real world opens up to 16:9 as he’s reckoned with his insecurities. It also makes the cut from dream to reality quite jarring, which is exactly what we wanted in that moment. Matching the door-frame alignment to the ratio bars was a clean way of transitioning between worlds. 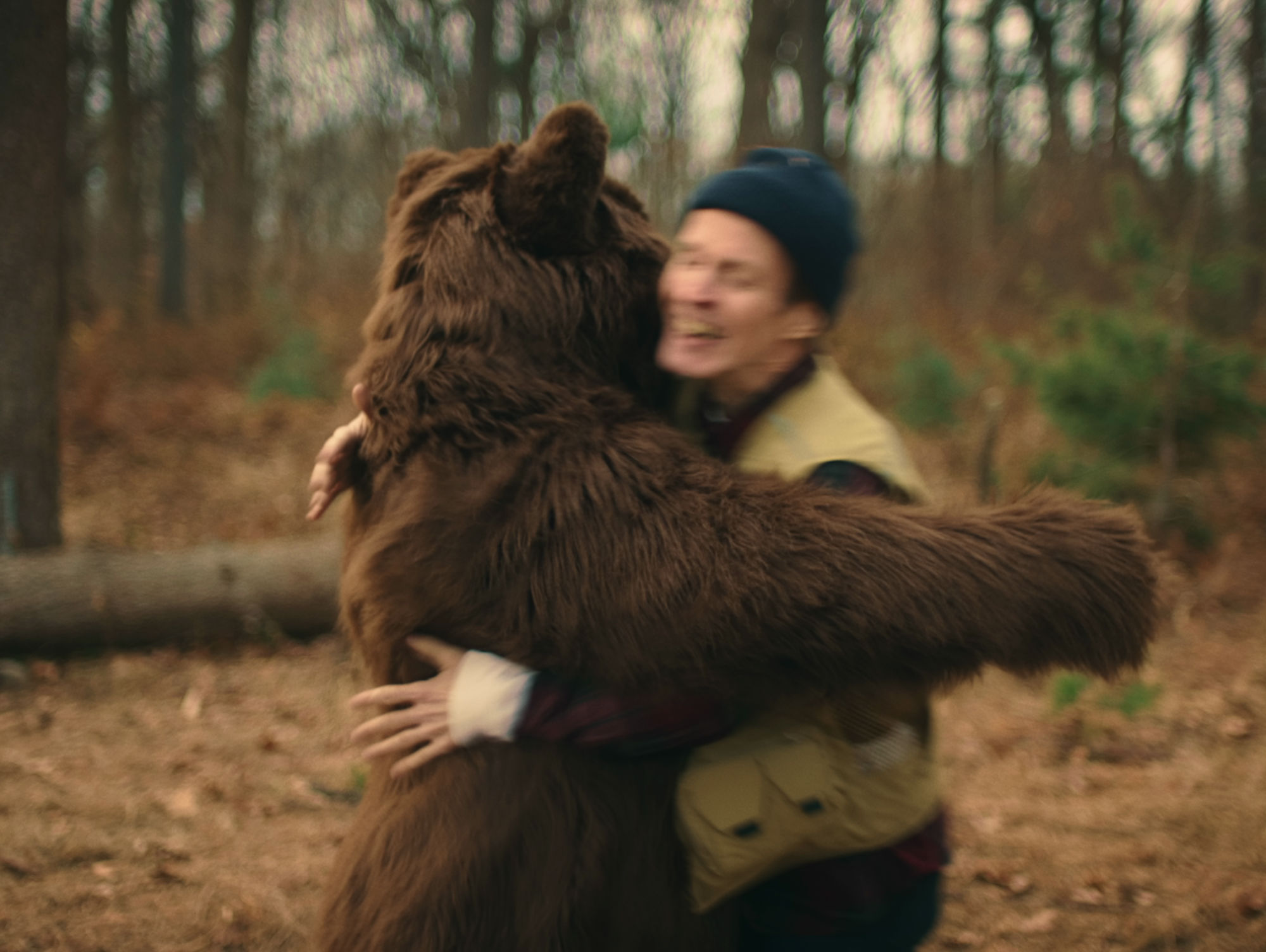 How long did the production take end to end?

The goal to shoot a set of spec commercials (we shot another one that same weekend) surfaced in August 2020. Our initial objective was to shoot them in November; however, a plethora of COVID-related obstacles caused us to push back our shoot date to December. This was a blessing in disguise as it allowed us more prep time (always a good thing) and our exterior shoot day happened to fall on the warmest day we’d seen all winter (60 degrees and sunny despite a frigid forecast). I took a step back from the footage over Christmas, cut it myself in January, and finished with Ancillary through February and March.

We also didn’t really consider how novel a talking bear would be in the middle of a public park.

What advice would you give to a director wanting to change direction into commercials? 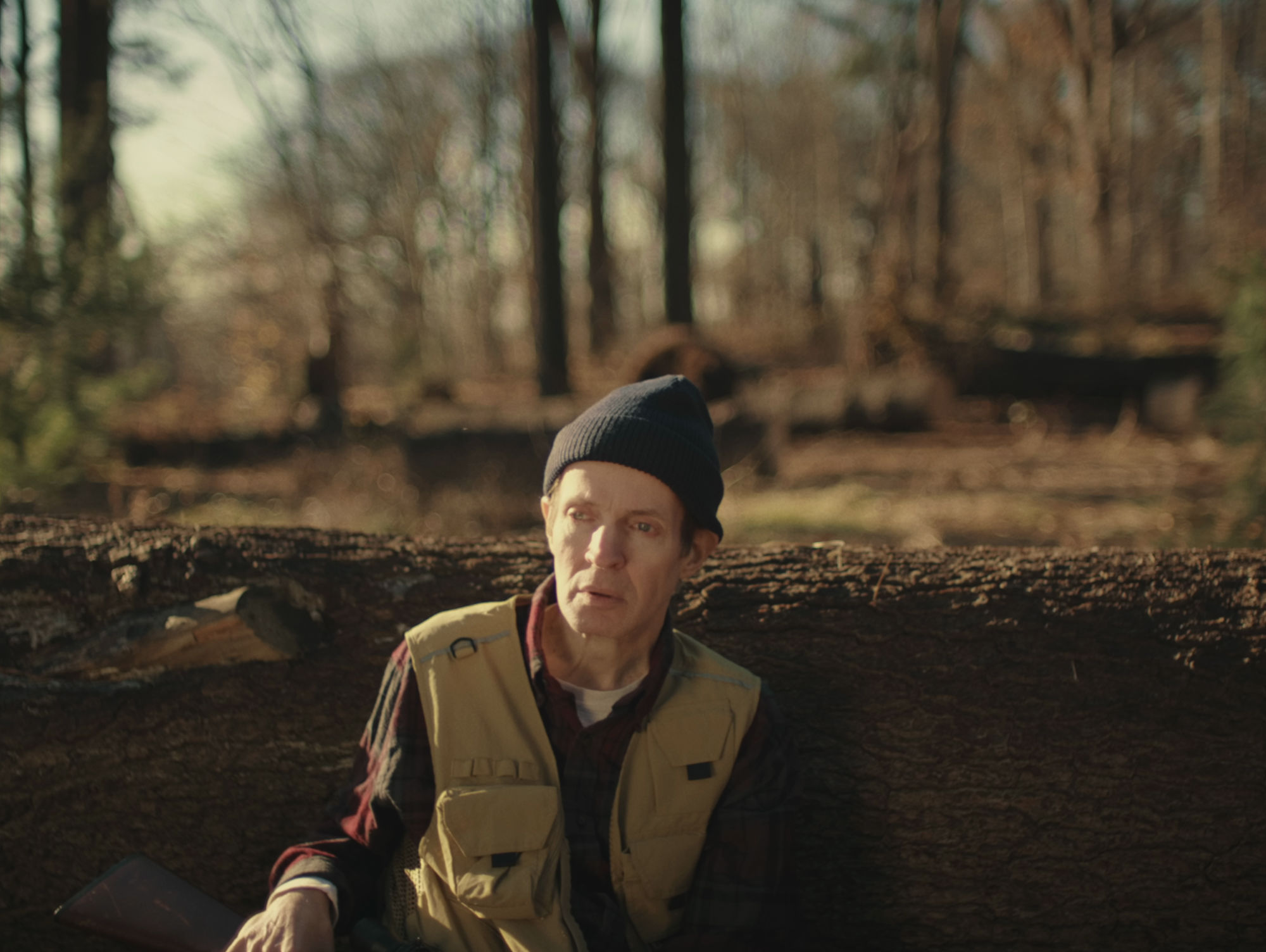 Have Purple seen the film yet?

I’m yet to reach out to Purple for their thoughts – waiting for the online premiere with DN to make the best impression!

What is next in the pipeline?

I have another spec commercial that I’ll be releasing some time very soon (hoping this leads to more commercial work). I’m also currently in development on a supernatural thriller feature that I’m really excited about – it’s an enjoyably twisted meditation on the painful process of grieving, and on how unburying the past can perhaps be more troubling than gratifying.

Directors Notes is honoured to present the premiere of Purple | Life-Changing Sleep on our pages today. If you would like to join the filmmakers sporting a fetching DN Premiere Laurel, submit your film now.