Outside an eerie cabin in the woods, a woman comes across a strange android lying on the forest floor. Intrigued by the nature of this being, she tries to enquire more as to where she comes from. Yet, the android is both evasive and curious, complicating the way that we understand the nature of robots. Through careful dialogue, mirroring and a standout dance sequence, I AM creates a fascinating reverie on the relationship between humans and robots, all the while hinting at a larger world just outside of our view. We invited director Jerry Hoffmann to Directors Notes to talk about putting Black woman front and centre of a science fiction story, finding the perfect location, creating robotic mannerisms, and the future of German cinema.

This is your thesis film at the Hamburg Media School. What drove the vision for this sci-fi story?

When we started to develop the story our collective of four (screenwriter, producer, director, DoP) already knew about our mutual fascination for Artificial Intelligence. We had previously produced a short film addressing gendered toys for kids and their impact on established gender roles. Most technical sciences are still dominated by (white) men. Their voice assistants, Siri, Alexa and co. are not only submissive and passive, they also carry a female voice. The first humanoid robots on this planet were white female androids built by white male scientists. The amount of outdated female gender roles created by white men in AI is obvious and problematic.

Inclusivity was one of the main forces to tell this story. A sci-fi story with two black female leads has not been produced in Germany before. Telling this story was hugely important to us. We wanted to give black actresses and narratives a spotlight and address the lack of diverse and female casts and crew in European films. We were glad that we were trusted and supported by our university.

For me, I AM seems to be about the way we can find connection, even if the person we are connecting to is not human. The film is generous in its dialogue and communication, as well as the oddly touching dance scene. How did you go about crafting that relationship?

The centre of our movie is this relationship between two black women. Although we are telling the story of a near German future which itself is science fiction, it was our goal to tell an emotional story of two beings meeting in a fateful coincidence that feels real and contemporary. As Noé — the human woman — lost her sister, she finds another black female being entering her life now, Ela, the android. You can easily interpret a mother-daughter relationship as well as a sibling relationship. It is common in both relationships to learn from copying, through identification, mimicking the other and stealing.

There is a mysterious interest and fascination from both sides. Noé might be the first female and the first black being that Ela has ever met in her life. And Noé has a natural interest in machines and technology. It takes time for her to see this machine as a living being that you can talk to and even dance with. We had a lot of fun discovering all the different shades of their relationship, unfolding and developing over time, as it evolves from interest, fascination, trust and sisterhood to awkwardness, fear and even pain. 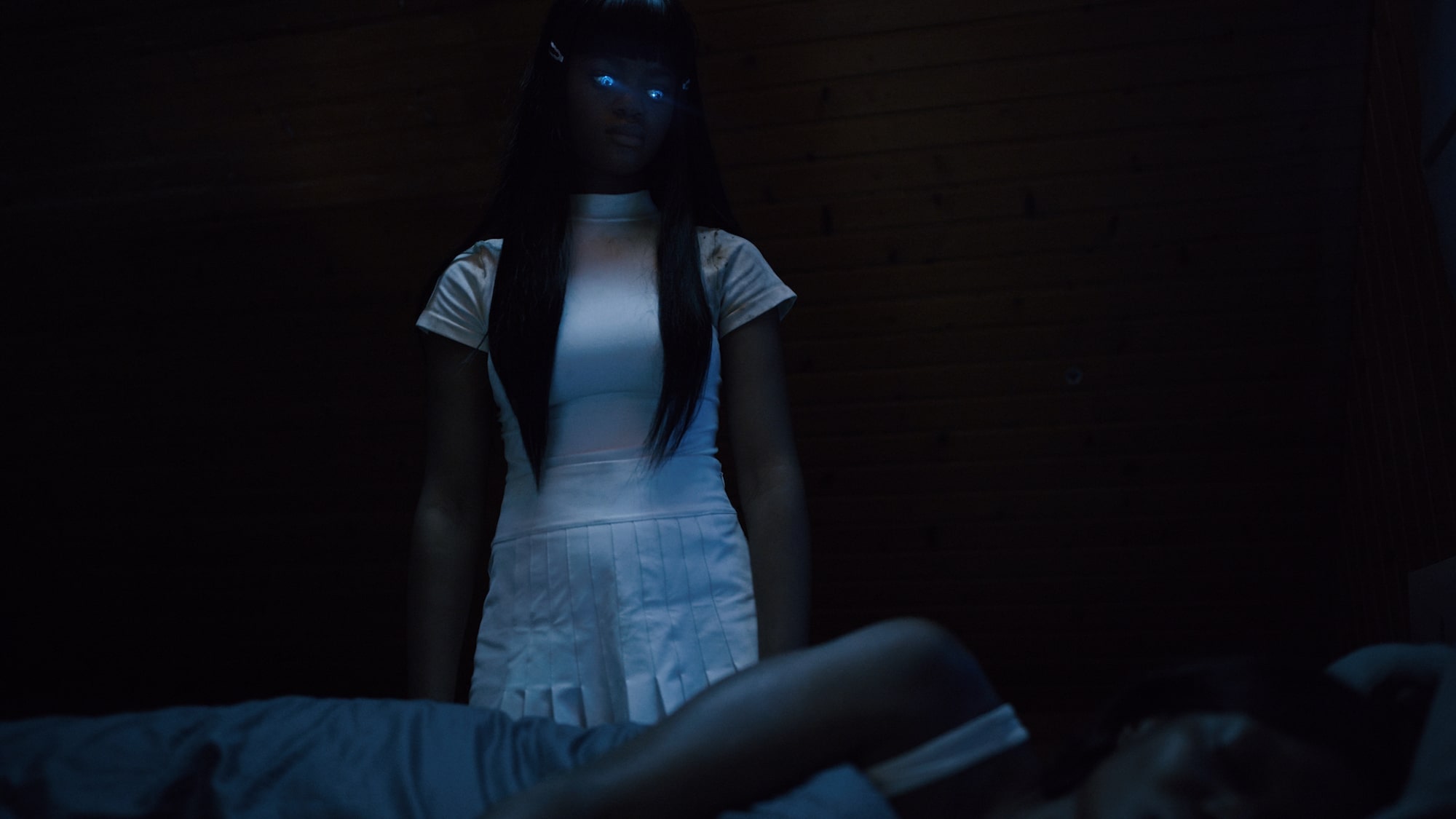 Melodie Wakivuamina fills the role of humanoid robot excellently. How did you approach the challenge of having her feel like she’s not quite human in her mannerisms and acting style?

Working with Melodie was a true blessing. As we already communicate with voice assistants, it was interesting and a lot of fun for us to explore how Ela uses voice when communicating, using Siri and Alexa as inspiration, and how the character develops over time and what she learns from the human. Ela starts motionless, like a puppet found in the forest and her voice is very digital and robotic. But over time she adapts, changes and becomes more life-like. At the end you can’t tell the difference between her and a human being. It was the biggest challenge to build a character that is both relatable, yet robotic, alien and strange. For Ela’s character it is all about dignity and self-worth.

We had a lot of fun discovering all the different shades of their relationship.

She is a being with emotions but built only for pleasure. Ela wants to be seen as a being and a living character, not a toaster. We tried to show Ela’s transition from a useless doll to an actual person by giving the audience the opportunity to get to know her at the same time as Noé. The range of different emotions towards the android might vary for everyone watching, as Noé switches from interest and fascination to fear and anger. Still, I always saw Ela as a living being with a character, personality, emotions and a will. What Melodie brought to the character was just a gift.

It’s not often that a German film has two Black leads. The same goes in science fiction more generally. Why was it important to you to put Black women front and centre?

With I AM we are trying to set new standards for German casting, which is still very white and male dominated, as well as diversify the European film industry and tell universally vibrant stories. When we first started casting we had doubts about finding two great Black actresses for this movie in Germany. We got over 150 e-casting submissions from breathtaking German-speaking actresses from Austria, Switzerland and Germany. We were shocked and saddened that we had not heard of so many of them as most of them had not appeared in big productions. It was a revelation that made us feel both angry about the industry for willingly ignoring so many talents, and at the same time motivated to make a change.

Finding our main actresses Sheri Hagen and Melodie Wakivuamina was a true gift for this movie. Their sent-in casting videos were already promising, and the chemistry at the first live casting made it clear to us that these two had to play Noé and Ela. These two women are incredibly talented and a true pleasure to work with. We truly couldn’t have asked for a better cast. We hope that I AM supports a German future where black female leads are common. I am a fan of genre and science fiction. As there is a lack of different genres in Germany, I am grateful to be part of changing images and outdated narratives.

Films such as these rest upon their location. Tell me how you found this cabin in the woods, one that looks more Ex Machina than something out of a horror film!

The cabin in the woods, the house where Noé grew up, was seen as a third protagonist by us. Finding the perfect house was very important. All of us, especially the producer Stella Flicker and the DP Lena Katharina Krause, as well as the production designer and I, searched relentlessly for houses. It had to be in the woods, with no other visible houses around. It had to have two floors, should neither be too small nor too big and had to have its own character. I always said I was looking for a witch house, something wooden and warm, but spooky at the same time. As the house in Ex Machina builds on a large scale, with glass and metal, we were more looking for a secret cabin in the woods from a fairy tale.

We hope that I AM supports a German future where black female leads are common.

Finding a house that fulfilled all these criteria during a pandemic where hotels are closed and people can’t rent houses was pretty hard, but we were so lucky to have found the perfect one at the end. Of course we had to have minor changes within the script to make it fit, but to me the house has its own magic, especially through these rare triangle shapes that immediately seem intriguing. The owners of the house were incredibly generous. A big shoutout to their trust and help.

What science fiction films did you look to for inspiration?

Of course we were seeking inspiration from the classics, Ex Machina, Morgan and A.I. – Artificial Intelligence, shows like Westworld and Real Humans, and documentaries about artificial intelligence and robots. But the biggest inspiration for me personally was the work of Jordan Peele. In his films, like Us, he recreated the horror genre with black leads, which was one of my goals for this German short.

The end of the film seems to point towards something larger with regards to the current relationship between humans and robots. Do you have a larger backstory for what is going on? Would you like to expand that in other films?

We built a whole narrative around the story of what the world we are living in is like. I had a lot of conversations with the author, Florens Huhn, on what the world will look like that we are telling outside of our story. But mystery is a part of this movie. We are in an undefined future of Germany where robots exist. Our protagonist lives secluded in the woods, almost antagonistic to the futuristic world outside. She loves working on old radios, and fixing things, although the house doesn’t have very futuristic features. It’s like a time capsule in the future. We are already dealing with AI, voice recognition systems and robots. Most robots today are white or silver. And we are far away from seeing robots as beings that we have to protect. But as we are getting closer and closer to a reality in which robots will have emotions, we have to think about our responsibility in the relationships and beings we create. I could imagine telling the universe of our movie in another form or medium.

As I am also an actor, I am shooting a dystopian science fiction series for Netflix in Turkey at the moment while developing my own show. Overall, I won’t stop working for a more inclusive, respectful film industry and society and putting out stories that I feel matter.