We all know at some point that the dynamic in our families will shift and the young will have to start caring for the old. But Hend Esmat and Lamiaa Diab’s absurdist short Flipped proposes this shift much sooner than expected, finding comedy in the switch of parent-child relations in the early stages of life. Taking a hand drawn, almost child-like animation style and curating a series of vignettes covering a day in the life of multiple families, Esmat and Diab’s short is a hilarious look at family life with a twist. DN joined Esmat and Diab in conversation, along with sound designer Patrick Henchman, to talk about the process of creating their short at the Bristol School of Animation, the real-life parental figures that inspired them along the way, and how they naturally stumbled upon their vignette-influenced structure.

What inspired you both to create an animated short that role reverses parent-child dynamics?

It all started in a brainstorming session during our MA Animation course in Bristol, when we were asked to come up with a bunch of ‘What if’ situations, and one of them was ‘What if kids and adults switched roles?’. When we were filtering all the ideas later on, this one immediately stood out and caught our attention! We were intrigued by the picture where adults are acting in a childish way. For some reason it seemed funny when a big-sized person screamed like a baby or was pushed in a pram! And this immediately got us excited to start thumbnailing and imagining plenty of other situations.

We knew that we wanted to include the looseness of children’s drawings, and keep a hand drawn look to the final visual style.

While sketching, we could also relate to the fact that our roles do inevitably change with time by having to take care of our parents, which gave the situations a deeper meaning from our point of view. Also, both of our sisters gave birth around that same time, so being around newborns was definitely one of the triggers which inspired many situations of this film and made us very excited to develop on this trail of thought further. 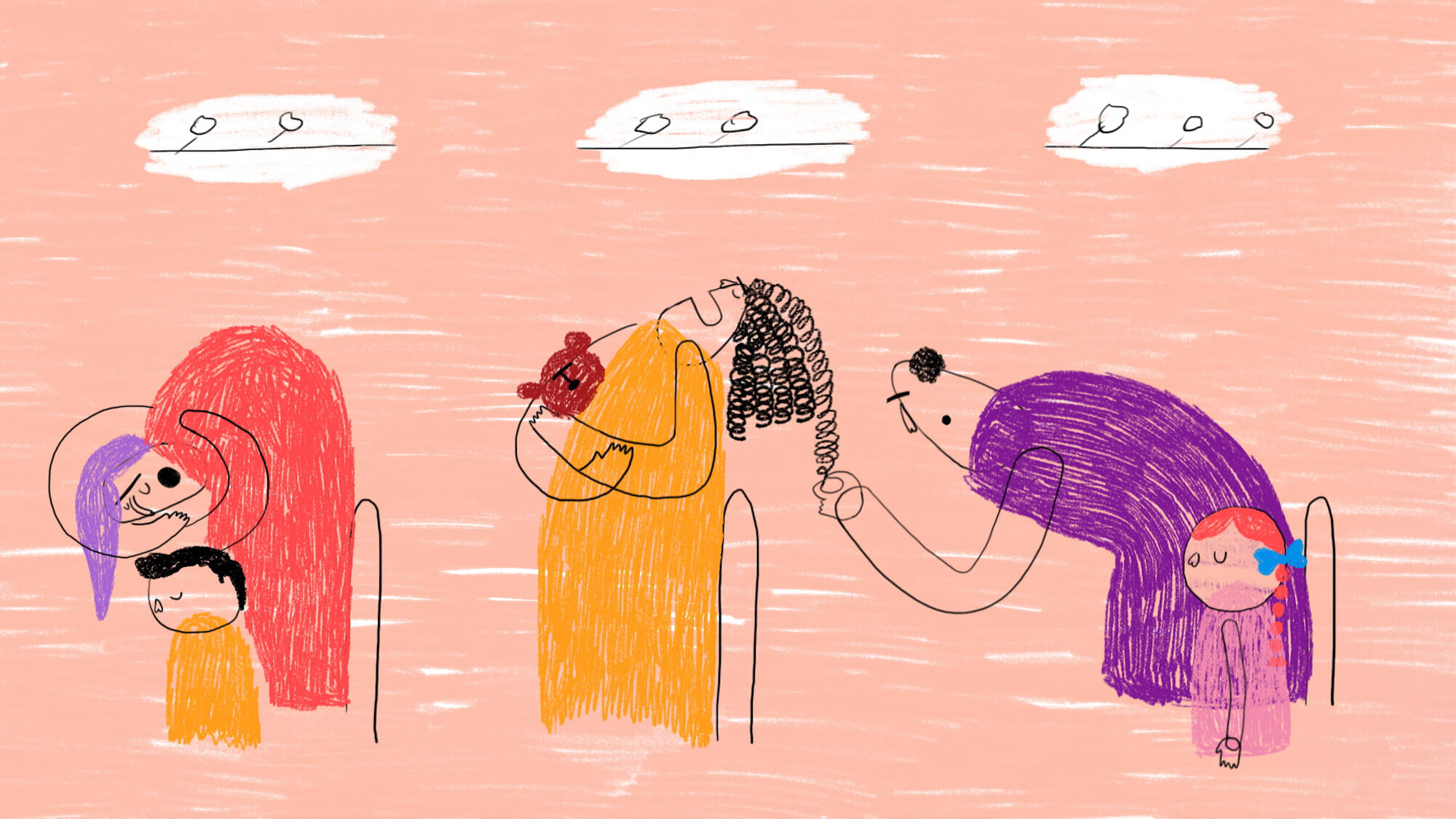 How did you decide on the almost-childlike animation style for Flipped?

It was a process of trial and error to be honest, and a mix of technical limitations along with inspiration from children’s drawings and the style of these brilliant films One, Two, Tree and My Mom is an Airplane by Yulia Aronova. We knew that we wanted to include the looseness of children’s drawings and keep a hand drawn look to the final visual style. Yet we were aware that we were not frame by frame animators, and that all our technical knowledge was restricted to After Effects at that time. In fact, this was the first time we got to animate this amount of characters and as we were excited to take on such a challenge to improve our animation skills, we were keen to use familiar tools in order not to be too lost.

After several trials, we were very happy with what we achieved. A mix of hand drawn textures in the body with graphical neat lines for the limbs, which the brilliant plugin DUIK allowed us to rig seamlessly! We felt this look fits well with both the adults and children being the target audience, and finally decided to go with that!

I read that you purposely resisted the idea of following one single protagonist in favour of a vignette-type approach, what brought on that decision and how challenging was it structurally?

It wasn’t an easy decision for us to settle with, as we constantly kept feeling that something was missing in the narrative, and we were afraid the film would start to get boring from repeating the same idea. But every time we made a version of the animatic where we followed a main character, something still felt off for us. We realised that we lost the main idea of exploring this world, and enjoying each situation on its own as we ended up forcing an extra message every time we followed someone specifically. It also felt as if only a particular family acted this way, not everyone else in this world!

While sketching, we could also relate to the fact that our roles do inevitably change with time by having to take care of our parents.

Our MA tutor Luis Cook gave us very constructive feedback during our tutorials, and highly encouraged us to keep exploring the idea further, leaving room for the structure to form naturally. So we slowly started to follow our instinct and just kept creating as many situations as possible, then puzzled them around. Analysing other film references which brilliantly nailed the vignette type hugely helped us as well, including Unsatisfying by Parallel Studio, El Empleo by Santiago Bou and Wind by Robert Löbel.

We ended up with almost 30 different versions for the animatic until we reached the final structure. Sticking to a single day as a structure felt the most convenient in the end, which allowed us to organise the situations in a chronological way, from the time everyone wakes up until they go to sleep. We also limited the locations to street, park and home as we wanted to keep the film as short as possible.

The sound design feels vital to the comedic tone, what was your process in developing it?

Patrick Henchman (Sound Designer): It helped massively that we discussed the sound early in the process, and decided it should be comedic without being cartoonish, which was sometimes challenging to do. For the foley and spot effects, that meant staying away as much as possible from cartoon clichés like slide whistles and boings. Another consideration was emphasising the fact that these adults were far too big and heavy for their surroundings which was why we included a lot of creaks and squeaks from the park equipment and vocal effort sounds from the children. For me the thing that really brought the sound together was the excellent voice acting, the actors Ginny and Neil’s son were two years old at the time, so they had a great point of reference when perfecting their babyish giggles and wails!

How long did Flipped take from developing those initial concepts through to the final edit?

The production schedule was more or less aligned with our MA course, so overall it took us two months to develop the concept and pre-production, which we made along with other side projects, and then four months fully dedicated to production.

How have you found the audience responses in general but also specifically from parents and children?

We were pleased to hear the film was well received by both children and adult audiences. We received feedback from screenings saying that the kids enjoyed seeing a new perspective of themselves, while the adults still enjoyed the film. We also had the pleasure to sign with two distribution companies, Little KMBO in France and MagnetFilm in Germany, which immensely helped in spreading the film to different countries and events, mostly family friendly ones.

What have you both got coming up in terms of new projects?

We are currently working on different commissions, trying to adapt a similar visual style we used in Flipped in the commercial world, both in animated videos and children’s illustration books. Eventually we would love to make a new short film, so hopefully we’ll manage to find enough time for that!