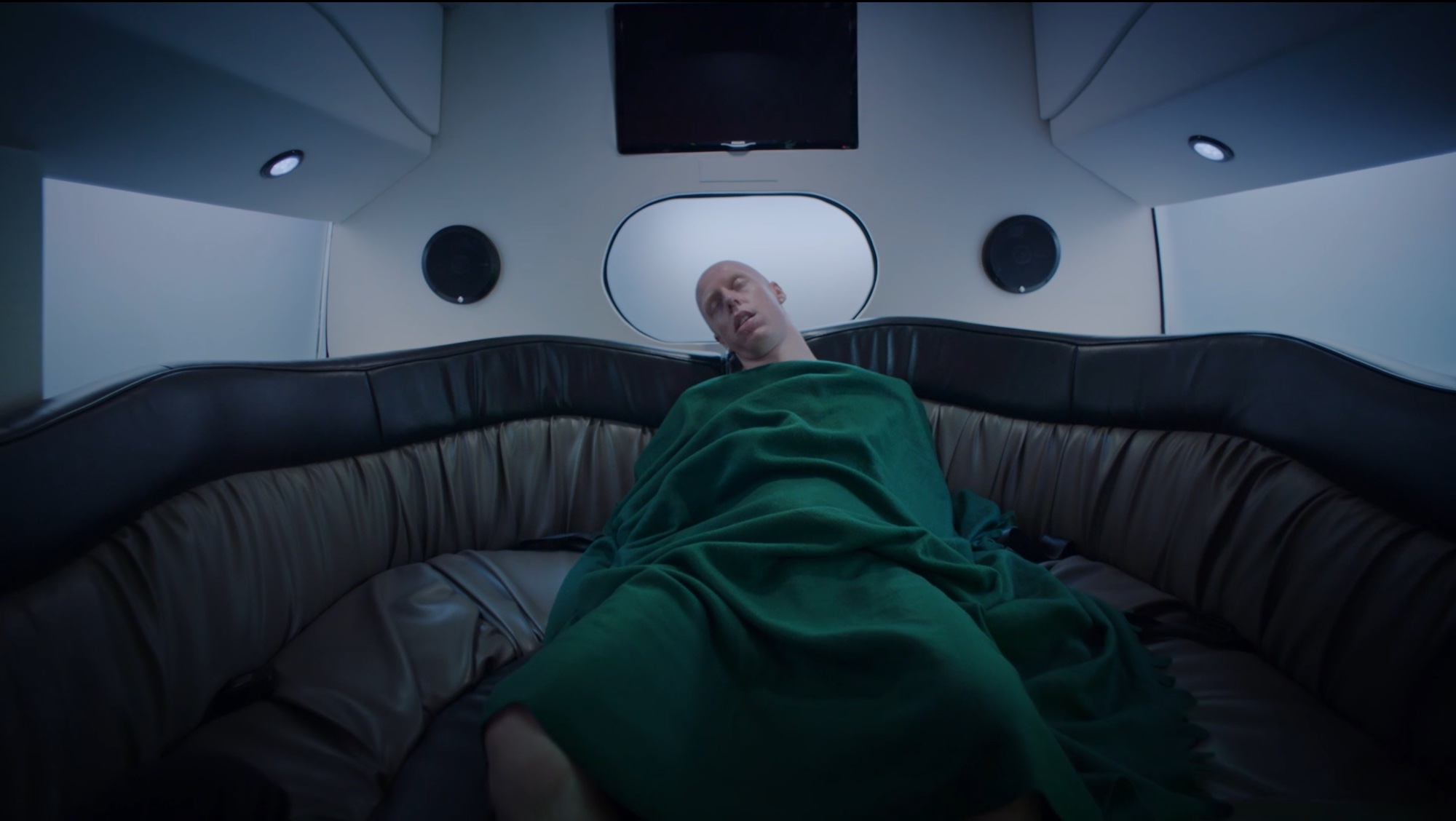 Embodying a hilarious satirisation of the sense of grandiose achievement fuelled by the modern popstar, Folkert Verdoorn’s short film The Performer (and some brief thoughts on beauty from upper management) takes a look at a washed-up enigmatic performer’s unique preparation ritual for his latest show. We bear witness as he arrives at the venue and enacts a series of bombastic routines in order to get him physically and mentally prepared to deliver his performance. It’s a short film with such wonderfully weird energy and we’re delighted to present its international online premiere today. We also joined Verdoorn in conversation to ask him about the inspiration behind that energy, the ritualistic narrative of the film, and the rhythmic structure he employed to reflect the awkward spirituality at the heart of his story.

The Performer is so wonderfully ridiculous in the best way. What brought you to tell this story of the modern performer in the first place?

I’ve always been intrigued by the idea of pop culture serving as a new theology. In 2021 we’ve departed from traditional religion and are searching for our own purpose, becoming our own god and finding our own beauty. This has created a lot of great and exciting possibilities, but at the same time it has created a world that is so free, that from time to time, it hurts.

To mask this lack of guidance the western world preaches: as long as you’re successful in what you do, you’ll find that purpose. So we end up in the fast lane, cruising towards that undefined goal. All the while we’re navigated by the soothing voice of a pop culture that, like religion, teaches us about wrong and right, what to do and what not, how to find happiness, etc., while at the same time being very superficial. A holy grail of alter egos, unfilled desires and fakeness. I wanted to create something that resonated with that feeling. Following a successful popstar who is obviously worn out by the system, but keeps on doing what he does. Day after day, night after night he faces his fans and portrays the role of a modern messiah. All the while a mystical voice pushes him to the limits of his capabilities. It’s as metaphoric or literal as you please. Either way it’s about our search for ‘something’ in this strange life, as we’re all searching for something in the end. 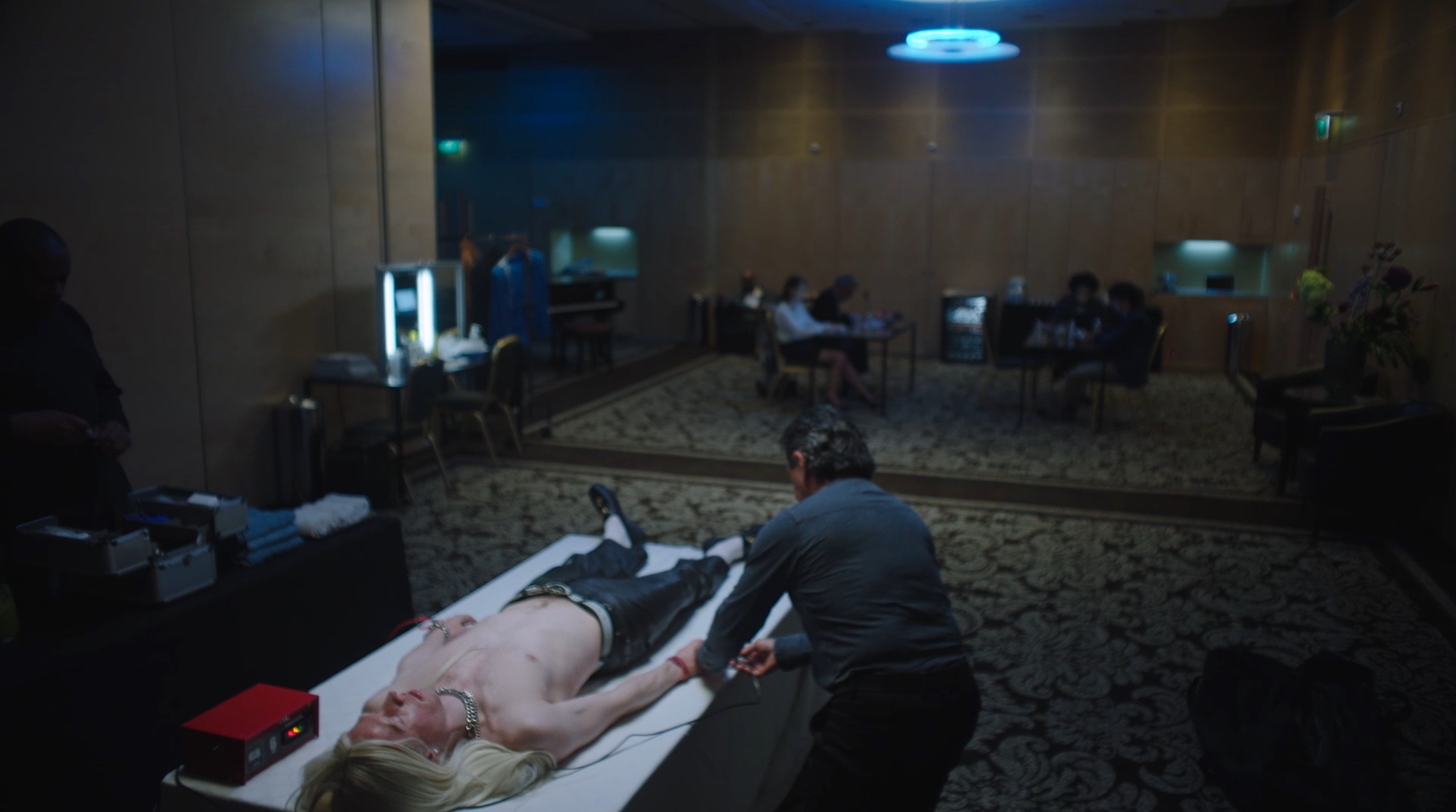 How did you pin down that concept into a script and get the project rolling?

We got the project rolling through a Dutch organisation called De Ontmoeting. It connected us with VPRO Dorst, a media channel that creates all kinds of great content. They partly funded the film, and the additional cash was raised through our crowdfunding campaign. However, when all that was realised we were still left with a zillion problems, as the film was obviously quite ambitious!

I wanted the film to feel like some kind of ritual. An awkward spiritual experience.

For sure. There’s that real sense that everything this performer does is of grand purpose.

It was essential that the whole thing was loaded with this feeling of ‘grandness’ that surrounds pop culture and fame, which is a challenge when the budget, as usual, is anything but grand. So I tried to write in a way that you just get enough of a glimpse of it to make it feel believable and, with the help of the good people from VFX house Supercontinent and Sound Designer Daniel Berends fill in the rest with VFX and sound design.

What inspired you to centre the film around his pre-show ritual?

I wanted the film to feel like some kind of ritual. An awkward spiritual experience. Therefore I decided early on to stay away from any kind of dialogue, but strictly focus on the rhythmic feeling of the routine, in which every day feels the same and relentlessly builds up to the ultimate moment of performance. As this meant we didn’t really have any form of traditional, narrative structure, the audiovisual experience became vital. So we focused a lot on things like the rhythm of the scene, as well as the continuous build-up of tension and release, raising itself higher and higher till the ultimate moment of the performance. A big inspiration in this was Paolo Sorrentino’s short film La Partita Lenta which is a beautiful, black and white short, that captures the empowering impact of a game of rugby in a lower income area somewhere in Italy. The rhythm, visual tension and sound design are really beyond.

How did you decide on each moment of the ritual process that features in the film, like the performer being carried in the bag or being electrocuted awake?

When I was writing the film, I was grinding away for weeks on what the story should be. Trying out different routes, but never landing on a perfect one. Like, I knew what the construct of the whole thing needed to be: A performer being taken to a performance and building it up to the moment of the show. And I had all these smaller separate thoughts of some kind of choreographically warm-up routine, a certain vibe I wanted to create, etc., but the whole thing never clicked together. And then, at the point where I was about to give it up and throw my laptop in the ocean, the whole thing just played out in my head at once. The surrealism of it, the metaphoric parts that could translate themselves into visual things, the make-up scene, him being carried in with the bag, the over the top, Frankenstein like electro-shock, the elevator scene, the crazy warm up routine. It worked! I barely changed stuff after that. Sometimes it just comes like that.

How did you find your performer? Was there something particular enigmatic you were looking for during the casting process?

Casting-wise we really went wide and didn’t make any restrictions on age, style or gender. It was a long journey which, in the end, led us to the unexpected catch of Raven Artson, who originally was set to compose the music, but insisted on doing the casting as well, and there something magical happened! For the casting we focused on the choreographic warm-up routine and Raven completely blew me away on that part. He managed to bring such a unique level of absurdity to it. Such an intimate expression of physique, that felt equally heartbreaking as scary, humorous as repulsive. I loved it. We had an amazing collaboration on the whole thing, and besides his acting, he also created a wonderful soundtrack that really pulled the whole thing to a new level.

How did you come to decide on how Raven would look in this?

This was a tough process. Mostly because I was shifting back and forth on how surreal or realistic it was supposed to be. In the end I decided it should be a pretty realistic, ‘over the top’ representation of a popstar, and get the surreal, metaphoric elements out of the preparation. We tried a lot of different things with the look, even gave him a new nose at some point! But in the end we made it more subtle. Small prosthetics in his mouth to give him a bit of an awkward look, and a wig to emphasise the superficiality of it all.

We focused a lot on things like the rhythm of the scene, as well as the continuous build-up of tension and release, raising itself higher and higher till the ultimate moment of the performance.

How long did it take to piece everything together? Were there any other key collaborators that influenced the film?

From writing to edit lock the whole thing took about a year. We shot the film on an Alexa Mini with Kowa lenses. Like always there were a massive amount of additional people who poured their heart and soul into the project and made it into the strange world it needed to be. The magical production design of Liz Kooij. The editing with Emiel Nuninga that gave it just the right rhythm and tension, the special make-up of Rob Hillenbrink and of course the production extravaganza of Hannah Padding from Bandit Amsterdam, who without the whole thing would’ve had a miserable ride into the trashcan.

Can we expect anything as absurd as The Performer from you in the near future?

I’ve been selling my soul to the commercial world for the last couple of months, but I’m trying to get funding now for a new film called against the absurdity of things, which will be an experimental, pretty weird flick about our relation with the absurdity of life. Which sounds fairly vague still, because it is fairly vague still! Haha. But it’s exciting. Will be fun.