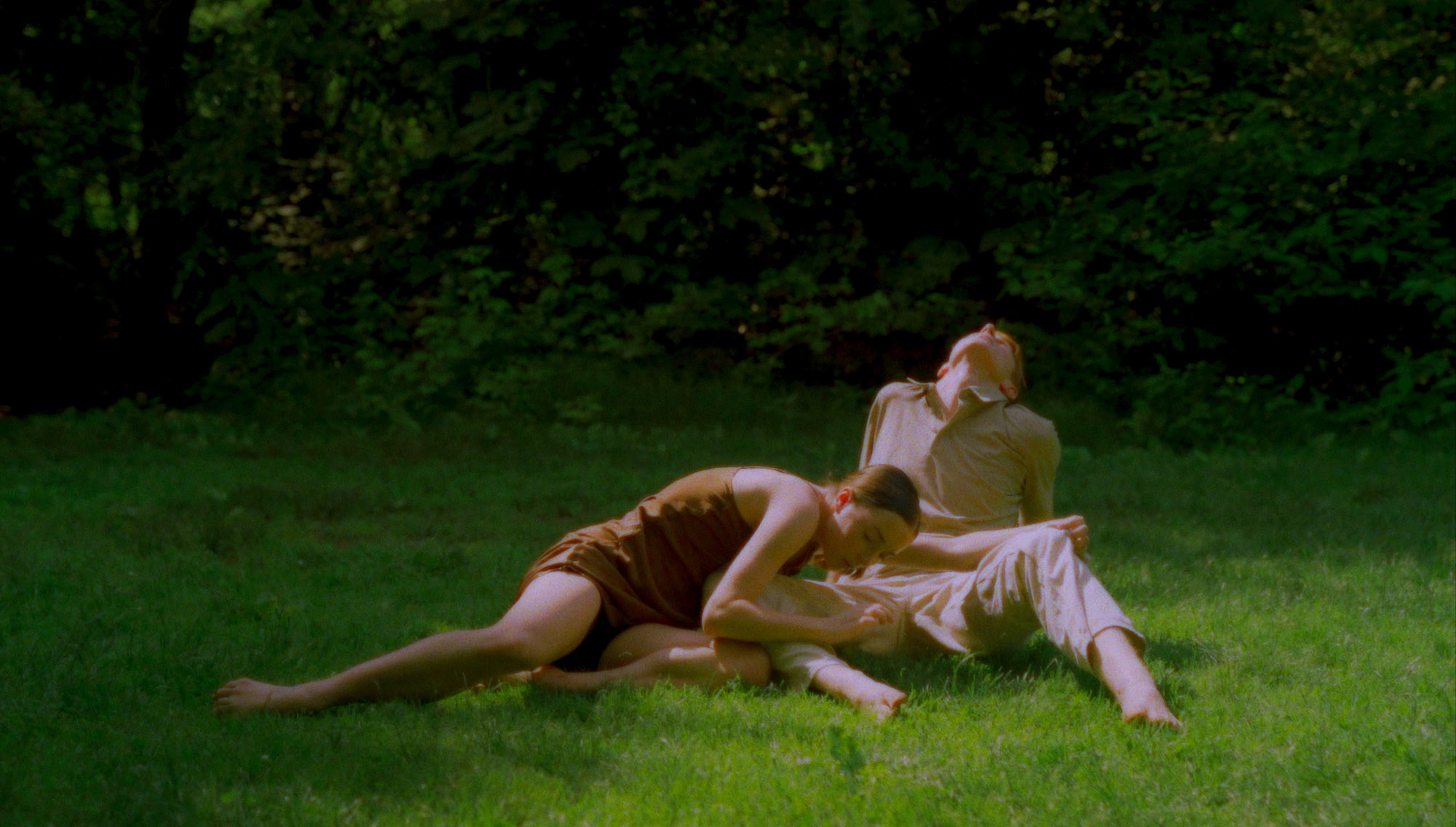 Shot in a single take, Tony Wang’s Kindred Bodies is an exploration into vulnerability and the importance of shared emotional experiences. Wang, who is currently studying at New York University Tisch School of the Arts, has created a short which captures two dancers as they react and intertwine, allowing themselves to become supported by each other. It’s a beautiful and succinct encapsulation of emotional frailty which Wang shoots with fluid motion, almost becoming part of the sequence himself by utilising the camera as a third participant to the action, increasing the immersion which is already palpable from the dancers’ mesmerising movements. DN spoke with the New York-based director about his continuous highly collaborative working relationship with his dancers, his decision to soundtrack Kindred Bodies with the calm yet repetitive urgency of Apex Twin, and the distillation process which resulted in the film’s entrancing one-shot cinematography.

To me, Kindred Bodies is such a beautiful visualisation of shared empathy, what has it come to represent for you?

Kindred Bodies is a representation of the delicate relationship between vulnerability and empathy. The characters use dance to communicate their feelings as they become a part of each other. This piece seeks to encourage us to share our inner emotions with others and to be in touch with our feelings.

How did you come work with these specific dancers and develop the concept for this short?

Abigail Curran, Sean Pfeiffer, and I are students from New York University Tisch School of the Arts. I have been very lucky to collaborate with these incredible talents on multiple occasions. Abigail and I started working on dance-related projects in September of 2019. Since then, we have not only become collaborators but also close friends. From the first film we made Liberated in 2019 to Kindred Bodies, we found special chemistry in each other’s art. Whenever I gave a cue during the middle of a dance sequence, she would seamlessly adjust her movements to fit that emotion. We might be the same person but with different talents!

What’s the collaboration process between yourself and Abigail like? What do you plan ahead of the shoot in regards to the choreography?

When Abigail and I collaborate, there are no shot lists or elaborate storyboards. A simple log-line, a few adjectives, and a beautiful setting to dance in would be everything we need to create magic. Kindred Bodies is no different from the fleeting nature of our other works. Abigail introduced me to her friend Sean, who is also an incredible dancer. The two artists spent months perfecting a dance duet project and asked me to film it. Enamoured by the beauty of their tender and intimate movements, I was inspired to adapt parts of Sean’s and Abigail’s choreography to express the beauty of empathy and vulnerability in the video medium.

I wanted to take advantage of the camera in constant movement to show the art of dance from a new perspective.

The planning process of Kindred Bodies was challenging though because both the dancers and I needed to know specific cues to change our series of movements according to the location of the camera. We went through a few rehearsal takes on location at first, but the pacing of the dance was off, which significantly prolonged or shortened the target length of the video of three minutes. We nailed down the timing and familiarized ourselves with the choreography after many trials and errors. I then decided to ditch the cues and move the camera according to the choreographed magic by the talented dancers. Boom! A single take was all we needed. I am still surprised now by how perfectly the camera movements and dance fit on our first try. The filming experience felt like I did not even have a camera on my hand, instead, I was a part of Sean and Abby’s beautiful performance.

What brought on the decision to try to capture everything in a single take?

The decision of using a one-take technique was to explore a new way of looking at a dance performance with a camera that constantly moves, inspired by John Berger’s Way of Seeing. As director Dziga Vertov once beautifully personified film cameras: “I’m an eye. A mechanical eye. I, the machine, show you a world the way only I can see it. I free myself for today and forever from human immobility. I’m in constant movement…my way leads towards the creation of a fresh perception of the world. Thus I explain in a new way the world unknown to you.”

Inspired by Vertov, I wanted to take advantage of the camera in constant movement to show the art of dance from a new perspective. Dance is a 3D medium, like moving sculptures. Yet, a dance performance is viewed by people from a single and static perspective, either from the seats of an auditorium or on the floor of a dance studio. When looking at sculptures in a museum, we can physically walk around the object to observe it. I wondered what effect the same viewership would have on a live dance performance that is free from immobility?

That’s a fascinating way of looking at the purpose of a single take. It’s almost like a guided observation in that sense.

I used the one-take technique to imitate observation by the human eye, which cannot cut or edit away from an experience. The camera is in constant movement that complements the dancers’ movements. It is choreographed to produce a variety of shots and movement trajectories like wides, close-ups, and arc shots. As a result, the piece feels like the camera is a dancer who actively participates in the dance sequence, rendering an emotionally involving experience. 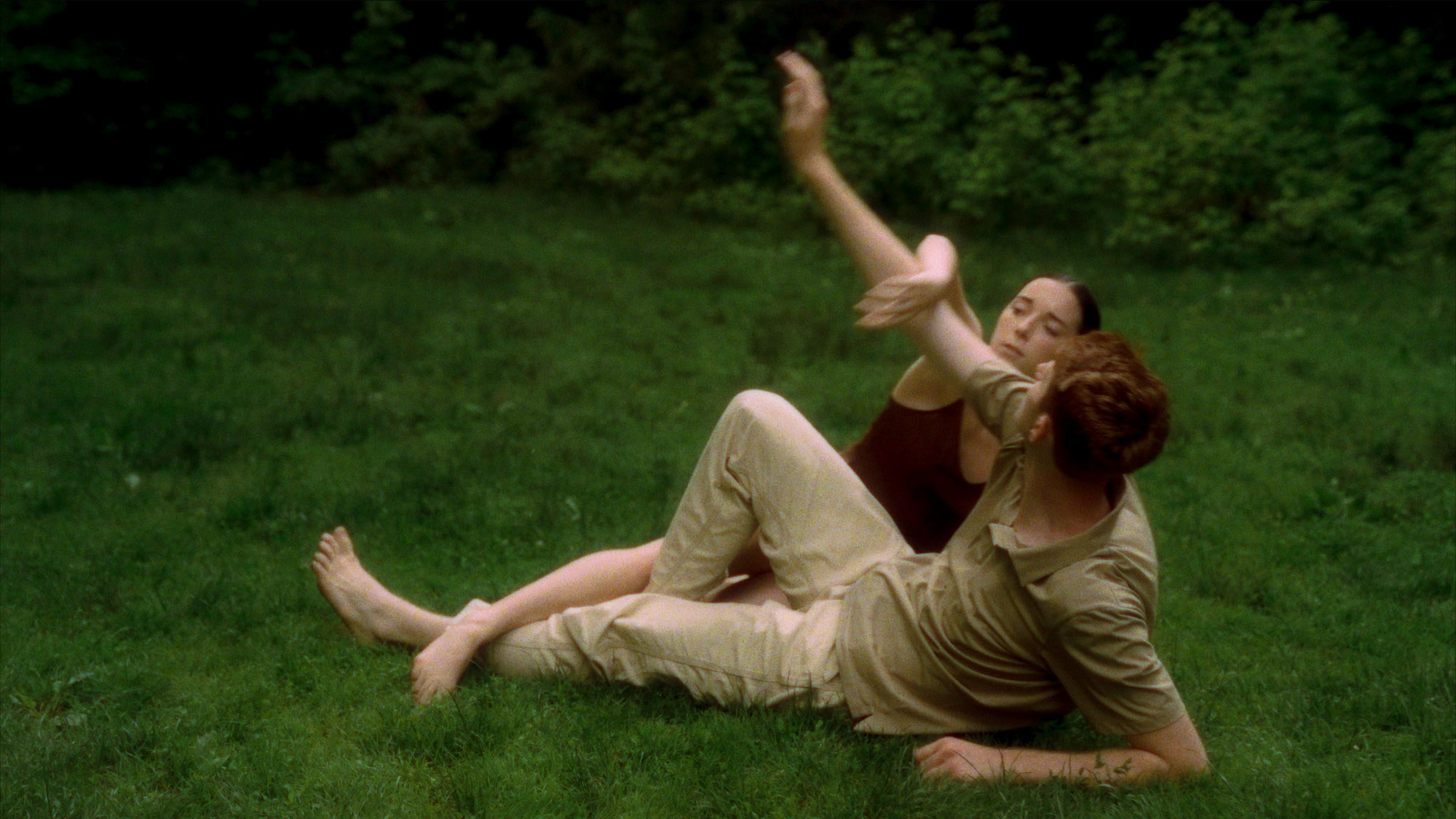 Was it a challenging production to get off the ground? What equipment did you use?

As a passion project, we had a minimal budget of less than $100 and of course, spent the majority of it on ice cream after we wrapped. I used my equipment, which consists of a Sony a7R III and a DJI gimbal to film this sequence.

The filming experience felt like I did not even have a camera on my hand, instead, I was a part of Sean and Abby’s beautiful performance.

The happy accident on set was that the sun was a paid actor. The clouds were constantly moving, giving us both harsh and soft light in a single take, adding extra dynamics to the movements of both the dancers and the camera.

Do you have a favourite section or moment in the film?

My favourite part of the piece is towards the ending when the camera pans up from the close up of the characters embracing to reveal a wide shot of the sky. It is a special movement because the camera doesn’t have to back up to reveal a wide, which would unnecessarily prolong the film. 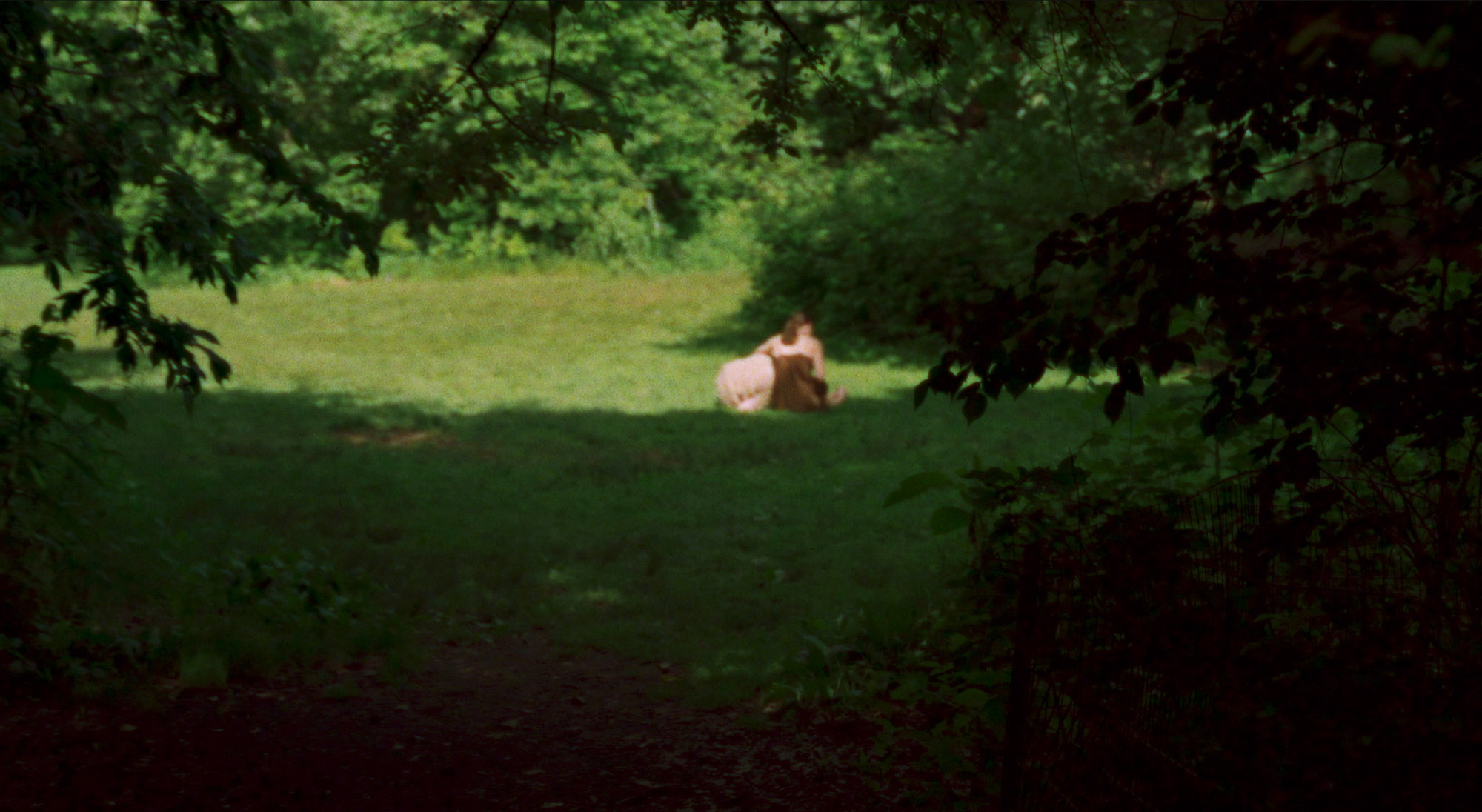 What are Abigail and Sean’s reflections on Kindred Bodies and their experiences working on it together with yourself?

Abigail Curran: A dancer who is able to provide vulnerability within the story they are telling to the audience, or in this case, the camera is what leaves viewers feeling as if they were part of the dance itself. This emotion breaks the fourth wall and leaves the viewers feeling as if they are one with the work. The process of making this film was so joy-filled due to the love of the art Tony, Sean, and I all shared. This dance was an honest look into Sean and I’s minds and I am extremely grateful to have such a special and talented friend to capture it.

Sean Pfeiffer: By utilizing movement, artists can display an array of emotions, stories, and feelings. Through the process of creating Kindred Bodies alongside Tony and Abigail, we were given the opportunity to explore the true meaning of dance and the ways in which it can benefit us as humans in a truly supportive and embracing environment. This piece connected the three of us in a beautiful way that allowed all of us to fully express our creative voices and share our artistry with each other.

Could you walk us through some of your decisions in post-production? What inspired the choice of Apex Twin as your soundtrack and also the soft-toned colour grade?

During the editing process, I spent a lot of time selecting music to fit the ebb and flow of both the dance and camera movements. I eventually settled on #3 by Apex Twin because while it is calm, which fits the theme of the film, the constant repetition of the track creates a muffled sense of urgency to emphasize movement in the piece. 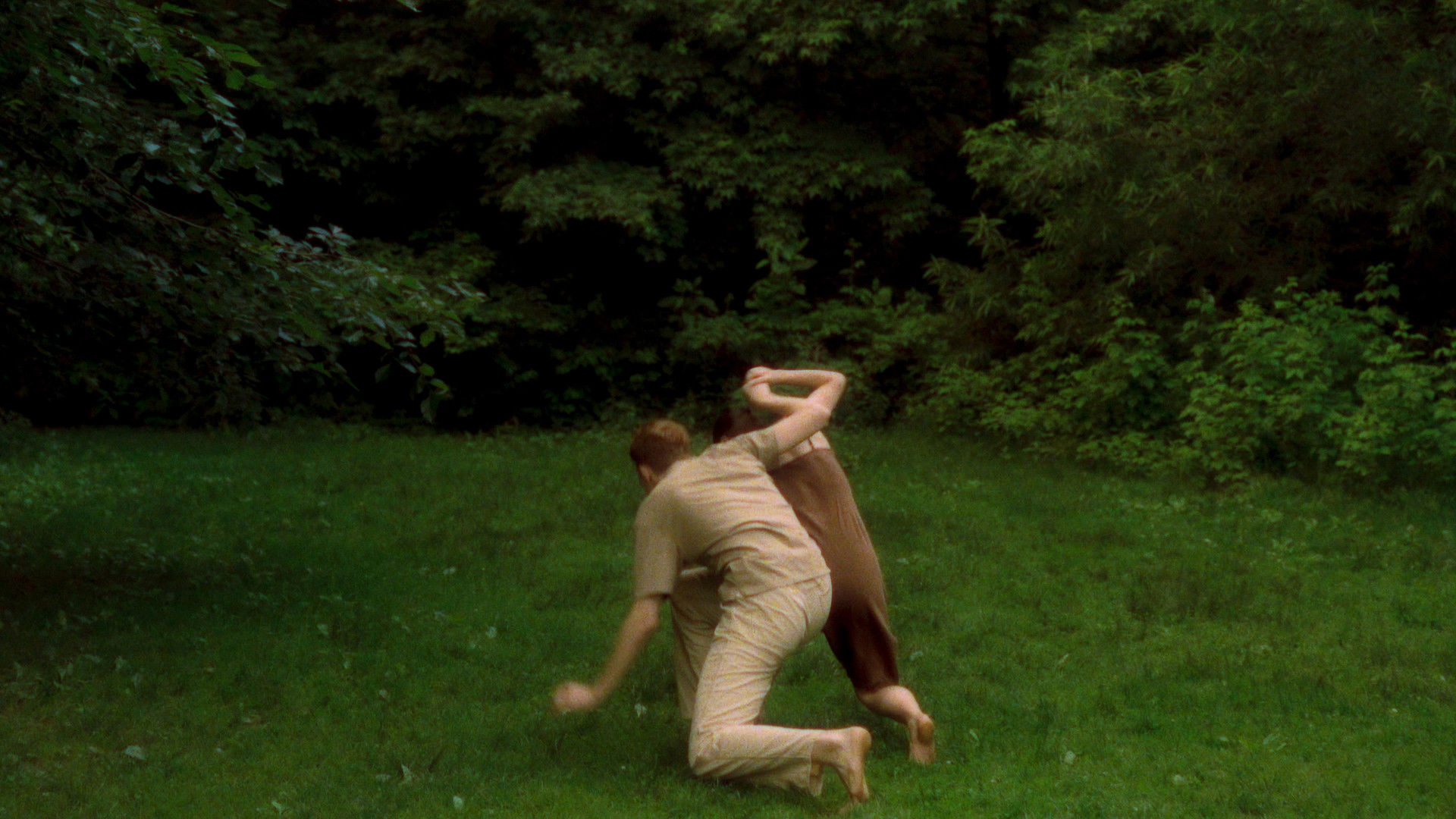 As for the looks, I tried a variety of film emulation techniques to soften the harsh digital image of the Sony camera. The point was not to make the project look like it was shot on film but to customize a purposeful aesthetic that fits the tender choreography by Sean and Abigail. The most difficult part of the colouring process was to maintain a constant level of contrast and exposure throughout the almost three minute sequence due to lighting changes. To ensure the consistency of the look, I added close to a hundred keyframes on the timeline with different exposure settings. I’m so happy it turned out great!

Are able to tease us with any of your future projects?

I am currently working on a documentary called Chinatown, 2020. The project entails personal stories of New York City Chinatown’s multigenerational businesses during the pandemic. It introduces how non-profit organizations like Welcome to Chinatown give hope to the survival of these businesses and boost morale among the residents of Chinatown.

Kindred Bodies is one of the many great projects shared with the Directors Notes Programmers through our submissions process. If you’d like to join them submit your film.