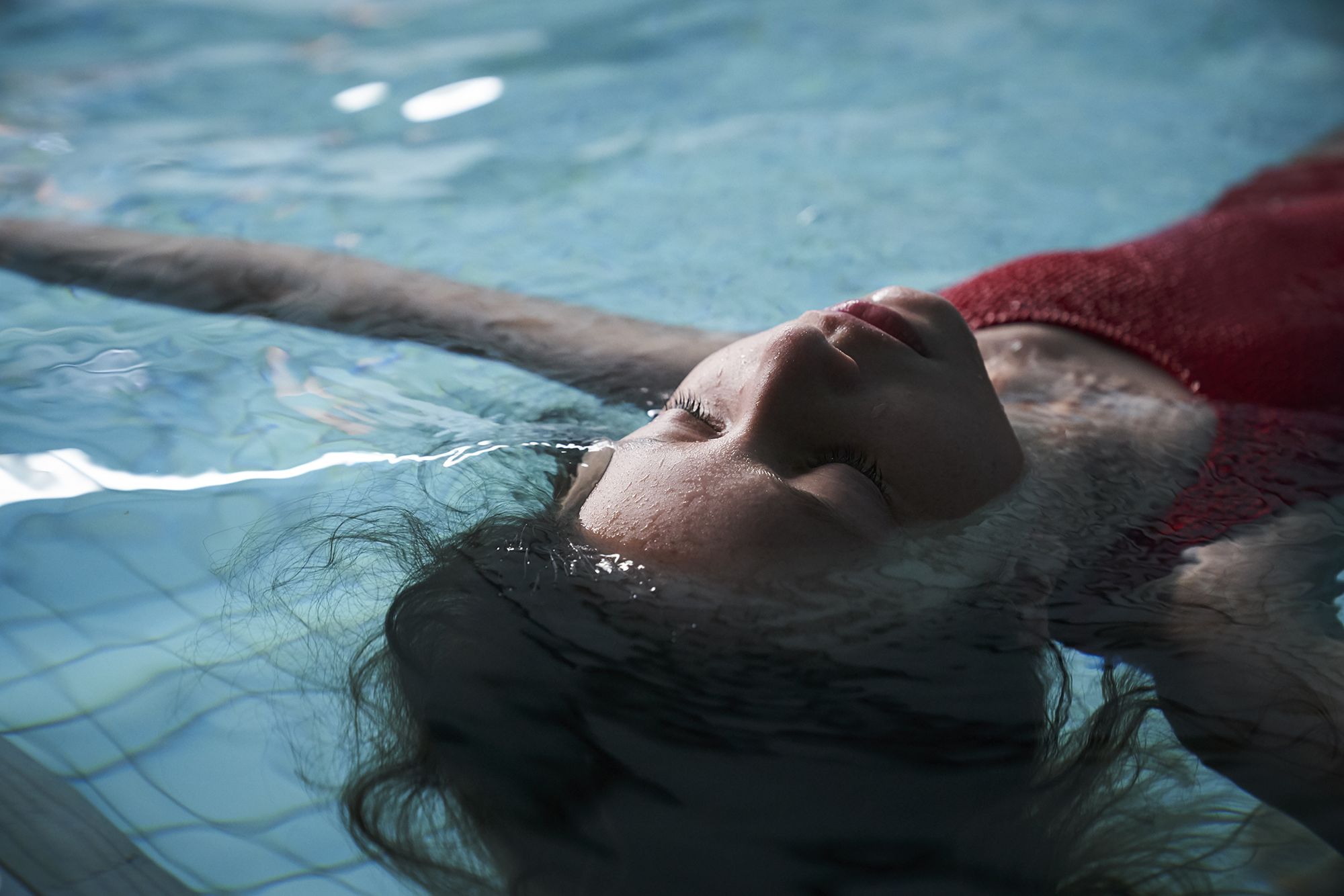 The opening sequence of Chlorine from Melissa Anastasi – who last joined us with her meditative look at life, loss and longing This Feral Life – cocoons us in the warm and comforting embrace of a swimming pool as water softly envelops the burgeoning shape of the pregnant women floating blissfully within. It’s a nurturing environment at odds with the familial situation of the young thief rifling through these mothers’ bags as she searches for something much deeper than the items she steals. A compelling exploration of the notion of motherhood as seen through the tensions that exist between familial obligations and the youthful desire for freedom, Anastasi’s use of water as a lyrical motif throughout moves the story beyond the boundaries of straight social-realist drama. With Chlorine recently arriving online we caught up with the Sydney based writer/director to learn more about the practicalities of underwater shooting, unexpectedly discovering her story in a writing exercise and her strong desire to authentically represent women’s stories.

Where did the story originate from?

Chlorine evolved out of writing backstory material for a feature film script entitled Soft Rain, which focuses on a teenager who is released from juvenile detention and seeks to reconnect with her estranged mother. I was writing some moments from the protagonist’s childhood and exploring the beginnings of her life of crime – which began with small petty theft at a very young age. Whilst writing these exercises, I had started swimming at a local pool and noticed an aqua-natal class.

The visuals of these pregnant women in the pool collided with the materials I had been writing, and came together in this very strong and specific vision in my mind, of a neglected child stealing from pregnant women as an indirect way of seeking a connection with them, and a subconscious hope of being caught for the attention and connection that would afford her. It seemed like the perfect cinematic metaphor to carry all of the ideas I was interrogating.

By taking a more formal approach to this subject matter, I was seeking to elevate it beyond the confines of social-realist drama.

Was it always your intention to make a short film from this backstory?

No, originally I was just doing writing exercises around it. But there was a power to this slice of the protagonist’s childhood that really spoke to me. And then when the idea of the aqua-natal classes as the location for her stealing came to me, I knew I had to make it into a short film. The visual juxtaposition of a seemingly motherless child and pregnant bodies in water was a very strong driving force for the piece that informed the writing and visual approach all the way through development. 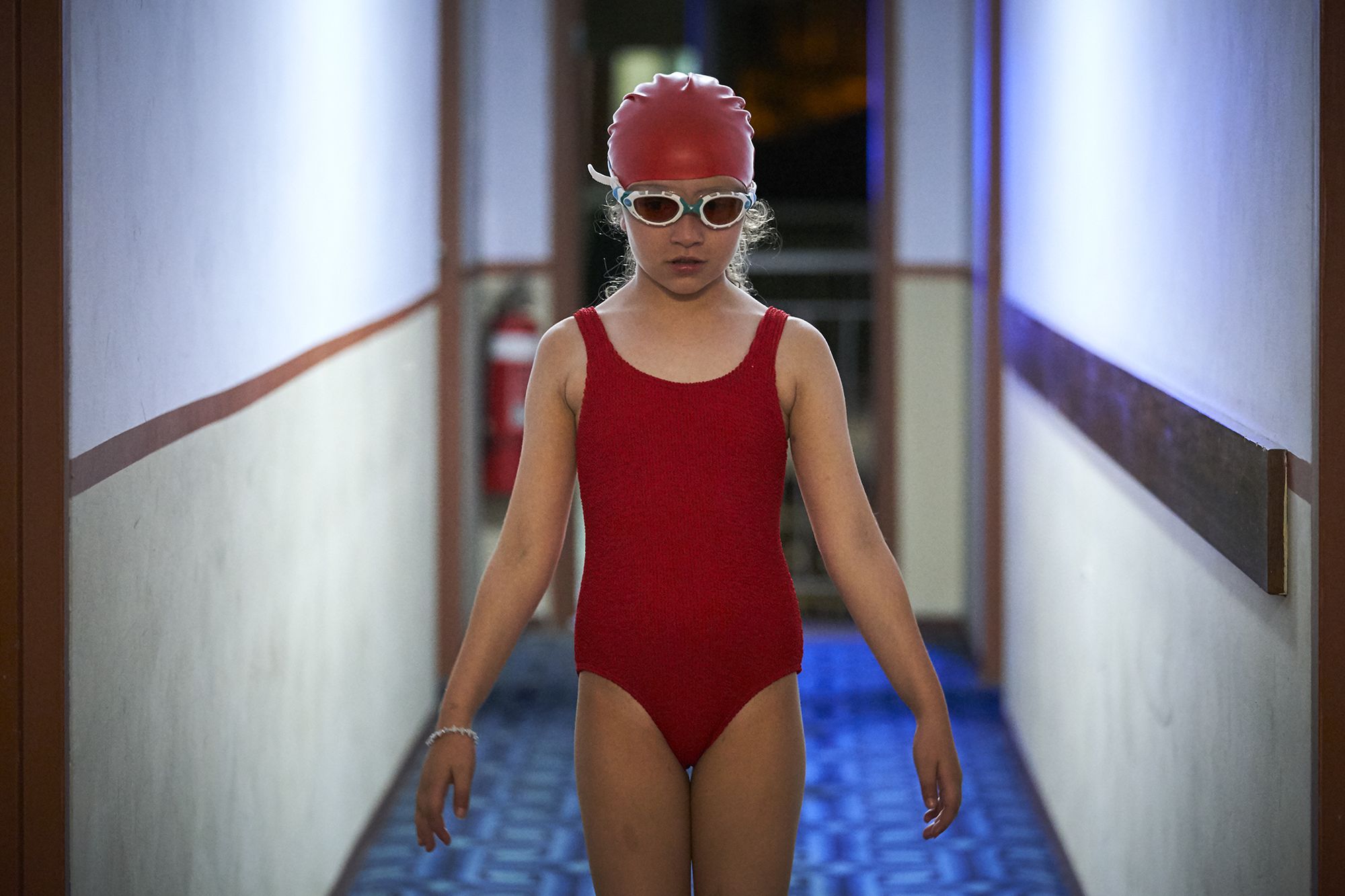 The female characters in the film are rich and complex, and this is something that I intend to carry through in my long form work. By making Chlorine I seek to represent these women’s stories in an authentic and honest way that is emotionally resonant. Visually the film has a fluid floating shooting style to match Keira’s careful, calculated and watchful approach to a world she must carefully navigate in order to survive. Composed shots of the pool world, capturing its order and geometry, and the pregnant female form against it, juxtapose the messiness of Keira’s life beyond its walls. By taking a more formal approach to this subject matter, I was seeking to elevate it beyond the confines of social-realist drama and take it into a much more poetic and subjective space, as seen through the eyes of the protagonist, who studies these women as though she can absorb something from them through osmosis.

For some time, I sat on the script, as it was evident that it would be a difficult film to make without a budget, and funding for shorts is very limited in Australia. With a child actor and complex underwater elements to the piece, I knew it was something we needed some support to make. When the Sydney Film Festival Fellowship came up, it was the perfect fit for Chlorine, and I was very fortunate to be selected for the program, which covered the cash budget needed to make the film.

How do you think the fellowship with Sydney Film Festival influenced Chlorine and do you think it would have been a different film without that support?

The Sydney Film Festival fellowship absolutely enabled me to make the film that I really wanted to make. It was amazing to be able to fully realise the vision for the film with my team because of the support they gave us, in a cash budget, but also having that support made it a bit easier to get additional in-kind support for equipment and post production facilities.

As with all shorts, it was still tight because we had all of the water elements, while shooting with a ten year old child, and needed a lot of safety supervision and specialist crew for the underwater shoot. And I had to cut a burnout scene with the boyfriend that I really wanted as it was too expensive. But still, I’m so thankful for all of that support. And the crew we got on were so great. It’s the first time on a narrative project that I got to shoot my entire shot list. 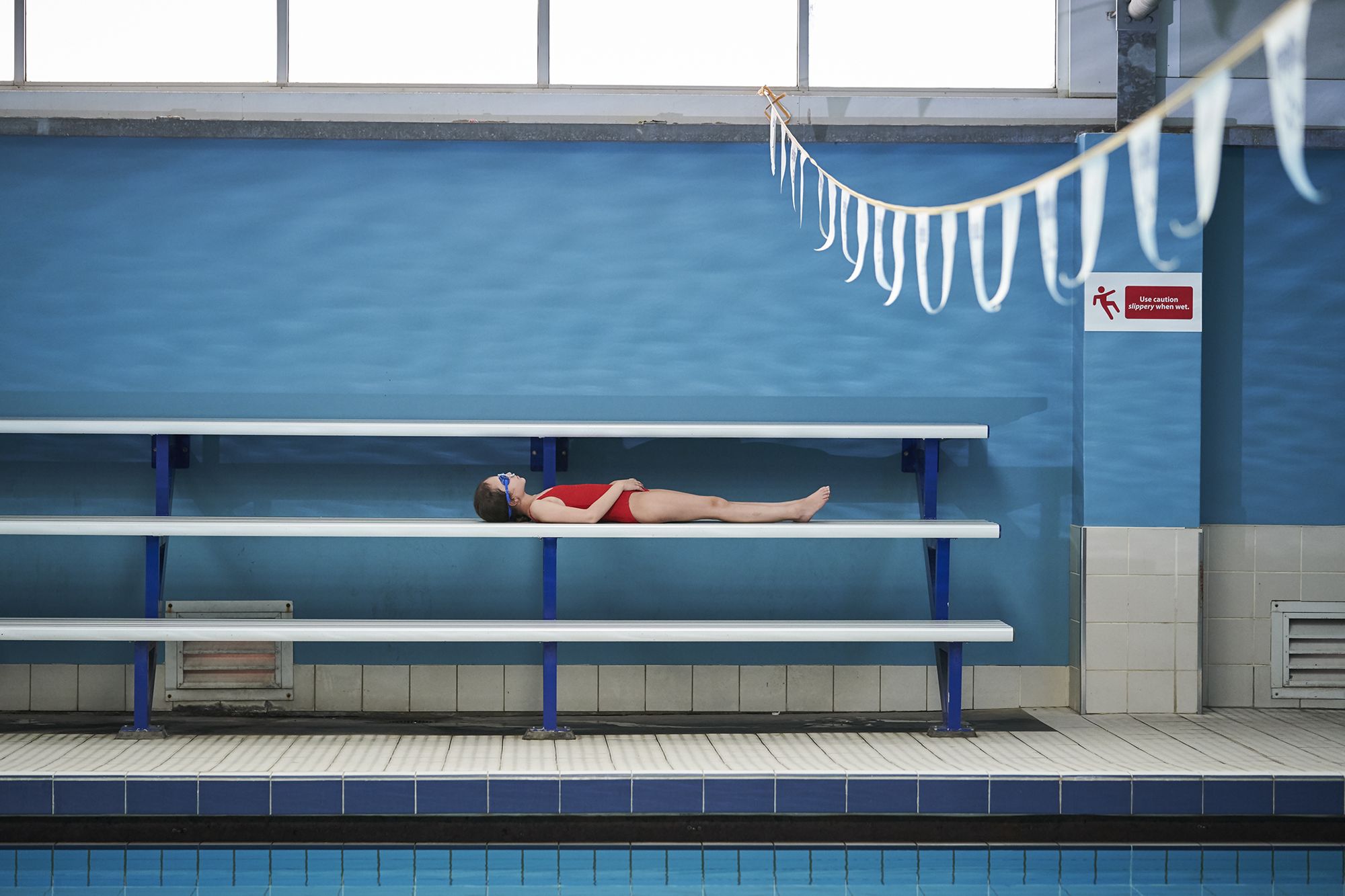 Your strong cast alongside the authenticity of your locations really add gravitas to the narrative. How were these all brought together?

In casting the film, we spent months searching via youth centres, schools, and on social media, looking for our Keira, and saw hundreds of kids through open casting calls and with the assistance of a local casting company, Chicken and Chips Casting, who were amazing. Once we found Clementine Bell, I worked with her in an improvisational rehearsal process to build up the character of Keira – her little rituals, her way of stealing, the stories she would make up about the objects she stole from the women. For the sister/mother role, I cast Marlo Kelly, an incredible actor who had fantastic chemistry with Clementine. It was so exciting to watch them improvising as two kids together, playing, fighting, negotiating with one another for love.

Casting of locations similarly meant looking for real locations around south Sydney in and around the South Maroubra housing estates, which had the DNA of our story world and juxtaposed these places against the wealth of surrounding beachside suburbs. The team scouted over forty pools to find the right requirements and visual dimensions to reflect the story. We wanted a pool that felt enclosed and homely, something with texture and warmth to contrast the harsh world Keira lives in. The aquatic centre is a cocooned world of its own, where mothers and their children bond – it is like a womb, and the fact that we see Keira here time and again, watching and stealing from these women, is symbolic of her desire to be mothered, to have familial and maternal love in her life.

The team scouted over forty pools to find the right requirements and visual dimensions to reflect the story.

Both Marlo and Clementine performed their own stunts under close supervision. The film has the constant presence of water and reflects Keira’s desire to find a maternal connection. As the water cocoons Keira and Beth in the closing sequence it visually represents a rebirth for their relationship. They float suspended, embryonic almost, before they embrace.

Could you delve further into the practicalities of the shoot and how you met the technical aspects of the underwater filming?

We shot the film over 6 days with a lean crew to cover all of the locations and spend the time capturing all of the finer details that take us into the character’s subjective world. It was my first time working with Cinematographer Emma Paine, and Designer Laura Anna Lucas, and it was a dream team who also bought on their largely female crew to make the film. It was honestly the most fun I’ve ever had making a film and in large part that was because of the positive energy that everyone brought to the set.

The underwater component of the shoot was an exciting and challenging prospect to deliver and an important element of the story. It was filmed with the support of renowned ocean and surf photographer Chris Bryan, and it was so fun storyboarding and planning that sequence with somebody who could advise how to realise the vision on a limited budget. Panavision came on board to support us with gear, which allowed us to shoot with amazing vintage film lenses that enabled us to achieve the textured, weathered look we were aiming for, along with the brilliant production design by Laura.

My wonderful Cinematographer Emma Paine has been developing a relationship with Panavision over the past few years, and so she suggested that we go to them and see if they could support us on this project, and they gave us a lot of support as a result of that and really got behind the team and the project. It was great because we got to test a whole bunch of vintage film lenses to get the right look for the film – we wanted it to be textured and soft, to help with the feeling of intimacy and closeness with the protagonist, especially in all of the pool and apartment sequences. So we ended up going with the vintage Panavision Primo Noir lenses, teamed up with an Alexa, which gave us a really organic look. Those lenses are magic. They have had something done to them that seems to soften the backgrounds ever so slightly that helps to focus on the face without being too over the top. 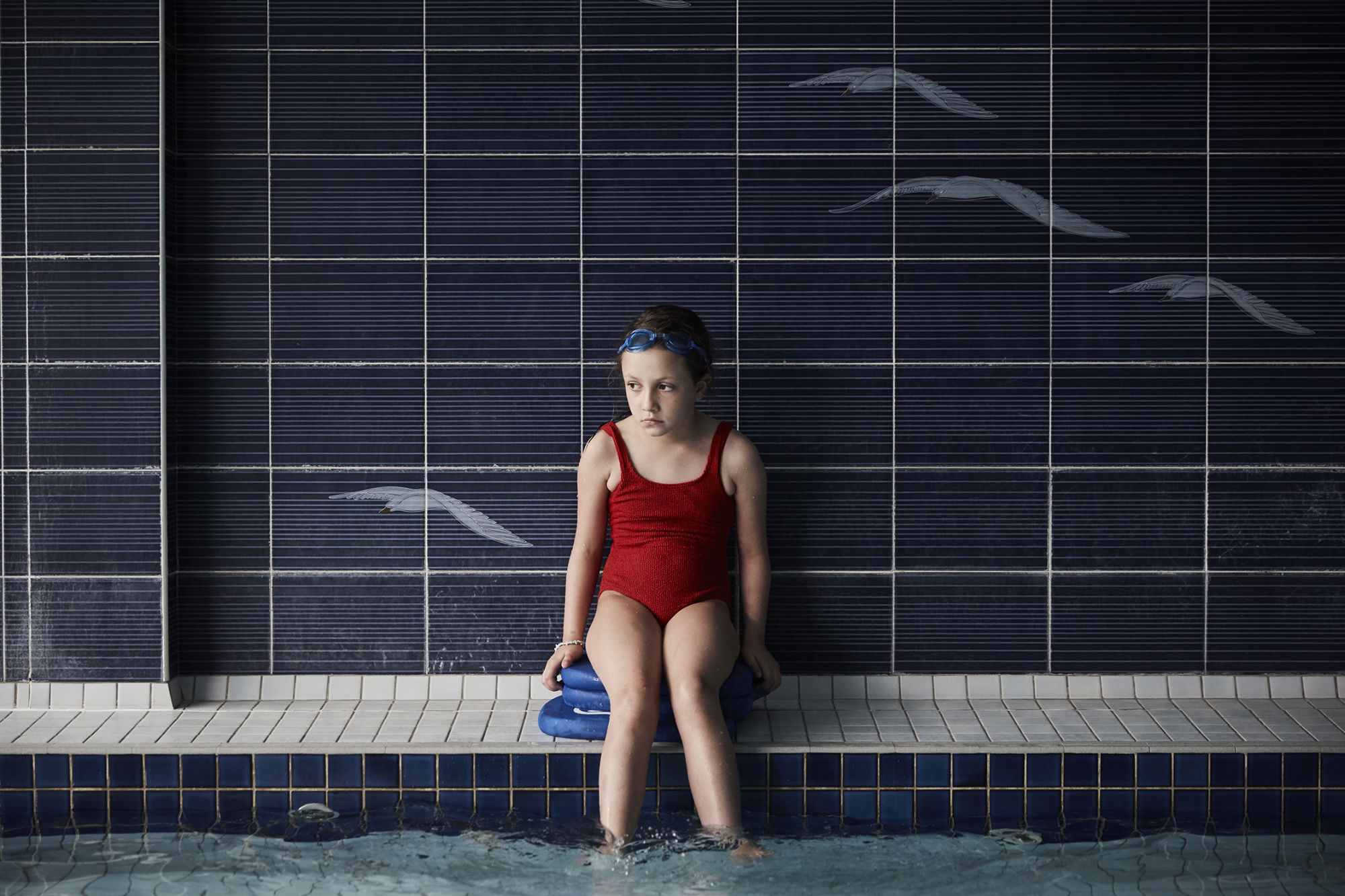 Are you still working on the Soft Rain feature and what else is on the cards for you workwise?

Right now I’m workshopping another feature entitled Milk & Honey which I hope to shoot next year. It’s just been accepted in the Venice Biennale College Cinema Program, so we will be workshopping the project in October/November and pitching it there after that. There’s also another feature entitled Deluge. Soft Rain is still very much in the mix but will likely happen after that. Ideally, I’ll have the same actor play herself a few years older because I loved working with Clementine so much and I love the idea of returning to the role as a young teen. I’m also doing a little bit of commercial work with Playground Films and Sherpa. So I’ve definitely got a lot on, which I’m thankful for.