Award-winning Writer, Director and Choreographer Lanre Malaolu’s experimental dance short The Conversation – which was commissioned by The Uncertain Kingdom – is a fluid movement-based piece which directly confronts the challenges Black men and women face in conveying their racial experience to white partners. In order to express the sheer unrelenting nature of how this experienced reality can sometimes feel Malaolu shot the main sequence of the film in a singular shot, showcasing the sensation of constant bombardment. This main section is also displayed alongside a conversational scene which cleverly highlights the subtle ways in which conversations about race can be used to manipulative effect within a multi-racial couple. Malaolu joins us below to speak about the challenges of bringing these set-pieces together, the creative impetus for his single-shot, and the desire to create a film with the same tangible dynamism as Childish Gambino’s This Is America.

What initially drove you to make a film about the complications of communicating racial politics?

The initial concept from the film came from conversations I’ve had sporadically throughout my whole adult life as many Black people have. Not just in a dating/relationship point of view but in friendships, workspaces, etc. I wanted this piece to show a sense of the strength and resilience that Black people have no choice but to undertake or build in certain areas of their lives. As well as a “Wake up, listen and see” for white people.

The one-take is there for a very specific and pertinent reason. To show how the conversations/experiences Black people go through can sometimes feel relentless and never-ending.

And how did you translate that as a concept into a visual, movement-based piece?

I work from a visual and emotional place with my films. I feel the emotion of a story or concept, and then start to visualise ideas and images of how that emotion physically manifests itself, in the form of scenes and key moments.

Is that process where the idea for a one-take short came from?

In terms of the one-take idea, this was something that I knew I wanted to achieve from the get go and it wasn’t about bragging rights or anything like that! The one-take is there for a very specific and pertinent reason. To show how the conversations/experiences Black people go through can sometimes feel relentless and never-ending. This is why it didn’t feel right for this specific journey to include any cuts, even digital ones.

Did you draw creative influence from any other artists or specific films?

Something I watched over and over and shared with the team was Hiro Murai’s This is America music video for the G that is Childish Gambino. It perfectly encapsulated how to take the audience on a dynamic emotional experience/journey in a fluid way. Something I was really passionate about achieving with The Conversation. Granted, they used digital cuts in This is America, but still, it really didn’t feel like it and was done for a reason.

It’s such a remarkable video and The Conversation definitely taps into similar energy. What equipment did you use to capture such bold, fluid cinematography?

We shot on an Alexa Mini with a set of Primos from Panavision. For the movement scene we used a Steadicam supplied by our fantastic op Grant Sandy-Phillips. Otherwise there was a small amount of lighting for the restaurant scene but due to the scale of the location for the movement scene we just went with natural light – one of the reasons we chose that location was the abundance of it, along with the variety of connected spaces.

What are the challenges of pulling a production like this together and how long did it take from start to finish?

The film was commissioned by The Uncertain Kingdom in March 2019. We held auditions over April and May, comprising of performers I’d worked with previously and those I hadn’t. Once we’d decided on our cast we went into rehearsals which amounted to about ten days spread across June, July and August. Early on during this period we’d found our locations which was important for the one-shot so we could envisage the journey through the space.

In early August we had a tech recce/rehearsal so were able to plot the various scenes more specifically but due to the budget were only allowed there for a few hours! It gave us enough to work off though and so in late August we returned for the shoot day. Thanks to the incredible talent of the cast and crew, after a morning of rehearsals (and a couple of technical issues!) we managed to get through a few takes before we lost light and remarkably the first take is the one you see in the film. It really was inspiring to witness Anna Macdonald our DP, Anil Duru our 1st AC, Grant Sandy-Phillips our Steadicam Op, George McMillan our Sound Recordist along with the rest of the crew do their own dance around our incredible cast as they nailed their performances with such precision despite so many variables.

I wanted this piece to show a sense of the strength and resilience that black people have no choice but to undertake or build in certain areas of their lives.

The following day we shot the restaurant scene which needless to say was a little more straightforward. We then went into the edit and post before delivering in November. Our main challenge during that period was the music but I was lucky to work with my long time collaborator Jan Baranowski again. The film was then released online alongside the rest of the anthology in May 2021 as Covid put pay to the planned theatrical release.

Could you talk a bit more about The Uncertain Kingdom process and what parameters The Conversation had to satisfy to be part of the anthology?

The Uncertain Kingdom team were a great support throughout the whole process. From my memory, the main parameter was that the film couldn’t be over 15 minutes, which makes sense as it was being included as part of an anthology of films.

Why was it important for you to have the movement based section of The Conversation bookended by the dialogue-based sections?

It felt important to literally start the film with “The Conversation”, then allow the movement to explore the nuances and emotional textures that it brings, from the perspective of our lead character, Tyrone. I believe that there are certain experiences and emotions that can’t be captured in words and so having the dialogue at the beginning of the film and growing into movement felt particularly vital for this narrative.

Could you talk about your approach to the choreography? How did you work with your performers to create the tension between them?

My process of creating choreography starts from a place of improvisation. I’d also set the company creative tasks rooted in the emotional themes we were exploring. I’d then use this as a foundation to develop choreography, however, my choreographic approach is a collaborative one. It’s important that the performers have ownership over the movement and find their own physical connection to it, in order to physicalise the emotional truth fully. The times when I’d come in and ‘teach’ the cast any movement, I’d always allow them space to play with the structure and flow of it themselves and for us to all be open to the discoveries that this would bring.

I remember joking with my Producer Alistair Payne-James that even though he doesn’t come from a movement background, that he’s a choreographer at heart! He has a great eye for movement and we’d have really open conversations about what emotions and storytelling were being conveyed by and from the movement. This was incredibly important to me as I’ve made a conscious effort to take my work away from the word ‘dance’ and it simply being physical and emotional storytelling, so having someone like Alistair who doesn’t come from a movement background, but could feel the emotion of the physicality was very helpful.

As someone who creates across several forms of expression, how do you decide in which realm to best realise your ideas?

Erm, I don’t… Ha! I see images and movement, feel the emotional textures inside my body and the form naturally appears in the way it wants to come out… sounds like some warped version of childbirth, innit?! 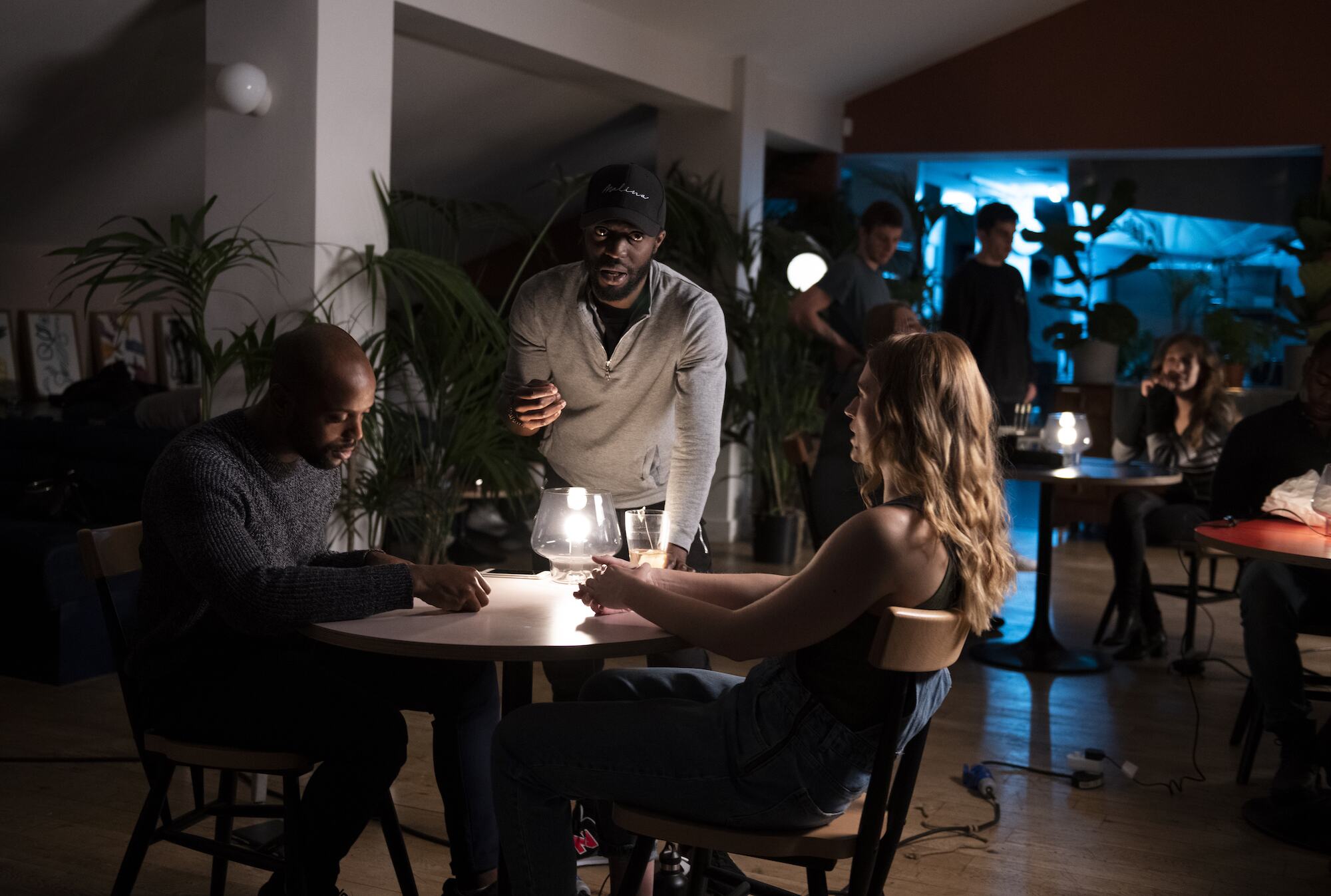 What are the considerations and conversations you’d like The Conversation to prompt for both black and white audiences?

It remains important to me that people experience the film, and all of my work, in whatever way they do and take from it what they will. I don’t like to impose on that. However, what I will say is it’s rarely ever about the content of these types of conversations, and more about the context, moreover, the context people come into them with that determines the outcome.

People can, and for years have had conversations about race/racial issues and there has been no actual change, growth or true understanding. I think there’s something about the qualities people bring to these conversations that is the ‘thing’. Perhaps I’d like the film to shine a light on that? Perhaps the film could provide an insight or change in perspective that allows people to enter these conversations with other qualities, to foster a more fruitful outcome for all involved.

Were you able to gauge the reactions to the film when the anthology was released on demand?

Yeah, I got a few lovely messages from people on social media which was cool.

And finally, what are you working on presently?

I’m currently developing my first feature with BBC Film, working again with Alistair as my producer, along with a few other things in the works.