There’s such palpable energy to Zac Dov Wiesel’s music video for Rodney Chrome’s To The Money, the lead single from his forthcoming EP Ghetto Popstar. It’s set in New York City where Chrome finds a bag of unlimited money which he then proceeds to flaunt and spend in vivacious fashion. Wiesel captures Chrome’s spree in heightened motion with wide anamorphic shots and snapping frantic zooms. Chrome’s music is a unique blend of pop, hip hop, rap and electronic, and Wiesel channels that eclectic spirit throughout the video. It’s a perfect harmony between director and artist, and it’s no surprise that the pair have been developing their creative relationship for a while after having both gone to NYU recently. Directors Notes is joined by Wiesel today, who delves into his history with Chrome and walks us through the technical know-how behind his impressively audacious music video.

How was it collaborating and working with Rodney on To The Money?

I remember speaking to Rodney originally, he played me the original EP Ghetto Popstar and from there we talked about which song we wanted to be the single. Rodney and I have worked together before and are friends, so there is a lot of trust in our relationship and Rodney really gave me time and space to develop this world with him.

The songs would keep changing but our intention basically always stayed the same. Rodney really wanted to make something that felt extremely unique. He wanted to create a world for Ghetto Popstar and wanted it to feel big. We knew this would be the most ambitious project yet and become a departure for us as we both were graduating from NYU while trying to launch our careers as creatives.

It was our weird twist on gentrification where everyone left happy.

There’s such a great energy to the whole video. From Rodney’s vibrant moves to the slick camerawork. What was the most challenging element of putting it all together?

The biggest challenge was trying to create a come-up story about getting money that felt really fresh. The song is so short trying to cram a whole narrative in there caused us to go through a lot of iteration and brainstorming. The idea really came together when Katie and CJ, our production design team, hand-crafted this massive bag you see him carrying around in the video. We loved combining the visual ideas of a fairy tale with the other themes of the EP, and after seeing the bag the vision really came together. This idea of Rodney running around with endless money, and slowly buying NYC was genuinely funny to us. It was our weird twist on gentrification where everyone left happy.

How did that time in between shoots affect the process of making the video? Did gaining the initial footage shift your perspective on how the story could play out?

The time in between the shoots allowed me to keep re-inventing and changing ideas. Locations would change, ideas would develop. Shane and I are very close friends so he really gave me the trust and space to explore different avenues and try things while reassuring me along the process. The song is so crazy that in order to match the feeling I felt that there had to be a new scene every couple of seconds. The multiple days of filming really allowed us to make the world feel big and we really wanted to cram in as much as possible in the short duration of the song.

There’s a great motif with some of the shots that involve the use of zooms and a split diopter, and the anamorphic lenses really make the world of the video pop. What inspired you to embrace those techniques and pieces of kit?

The use of a split diopter in all the sign shots was Cinematographer Shane Bagwell’s idea. We found it a unique way to create visual motifs while also pushing the narrative forward. It was fun, poppy, and had a unique visual style.

The time in between the shoots allowed me to keep re-inventing and changing ideas. Locations would change, ideas would develop.

Shane’s operation of the zoom lens using a microforce was so good, that we decided to make the final conference room scene a one take and get rid of any coverage. We wanted the visual style to be eclectic and match the energy of the song. The use of anamorphic was an easy choice as it elevated the entire pop feel of the piece. 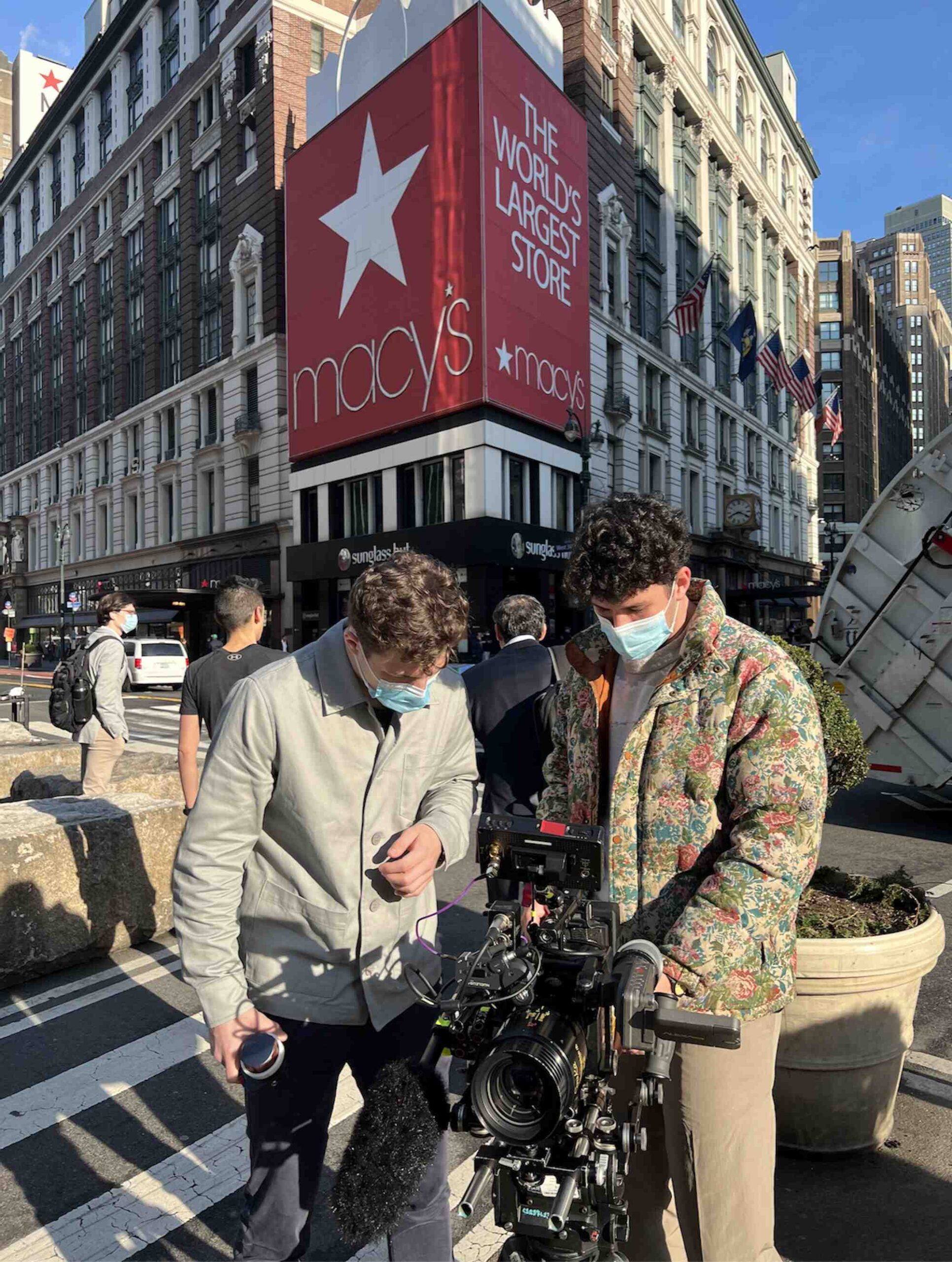 You mentioned how the video evolved during the break between shoots, could talk more about that? What changed narratively during that period?

It really allowed me to fine-tune the vision before shooting the main section of the video. Originally the ending was meant to be a sort of bank robbery, but we started changing the vision to be more aligned with him just making business MOVES. Very grateful for those two weeks between shoots.

What are the practicalities of shooting on the ground in NYC? Is it a difficult place to shoot?

Love NYC but it is a pain in the ass. Every time we were outside Rodney was freezing, but he is a true performer so you could never tell. Also parking and transporting the crew is just a challenge. Twice someone on our crew crashed/scratched one of the vehicles trying to park. It is definitely worth all the stress for those steam stacks though.

The song is so crazy that in order to match the feeling I felt that there had to be a new scene every couple of seconds.

Rodney Chrome has such a distinct style himself, how did you both approach his aesthetic/costume in the video?

Rodney usually styles himself, but for the first time worked with stylist Yachi Gault. One of the things we wanted to accomplish in the video was to have as many fits as possible, because of this Rodney and Yachi split up the work. It was like nine looks in total. It was a lot of Pinterest boards and pulling a lot of clothes and seeing what worked. Rodney and Yachi really went off.

What’s next for yourself after graduating from NYU?

I am looking to get signed and get my artist visa. Any production company slide into my DMs. Please.