You might think that in a city like New York, you are never alone, but there are places and times where one of the world’s busiest cities can feel like an empty soundstage. Set on a desolate, almost-haunted island captured in a perpetual state of dusk, I Carry Them is a touching and sensitive dance film from Director Bram VanderMark. With a plaintive jazz score, graceful movements and keenly felt-match cuts, it’s underscored by a sense of yearning and loss as our protagonist searches for meaning through streets, laundromats and abandoned car parks. Made as part of the Films.Dance programme from Jacob Jonas The Company, this is a mood piece drenched in a feeling of abandonment that nonetheless never quite shakes the possibility of a more hopeful future. We spoke to VanderMark about embodying the process of trying to move forward through movement, the short’s captivating match cuts and how the gorgeous score came about.

This is a collaboration between Jamar Roberts, Tanztheater Wuppertal and yourself. How did it come about?

All credit here goes to Jacob Jonas and his brilliant initiative Films.Dance. Jacob has a passion for bringing tangential creative practices together and allowing the unfamiliar to engage new levels of creativity. Jacob decided that each initiative from Films.Dance would feature a unique choreographer, dancer, director, and composer together to form sort of a one-of-one group dynamic. This team had begun working loosely with another director in NYC who had to leave the project, and that’s when I was introduced. The team graciously allowed me to bring in some fresh perspectives and build something new together, and I’m so proud of what we ended up making.

The novelty of it all allowed me to be extra attentive and aware of how the movement was landing on me.

When you saw the choreography, how did you think about bringing that to the screen, as well as combining dance with smaller, non-dance moments? Did the brief give you the space to do this?

This is my first experience working directly with a choreographer and a dancer in a film, so the whole process was new to me. I think the novelty of it all allowed me to be extra attentive and aware of how the movement was landing on me. Jonathan Fredrickson is based in Germany, so he and Jamar were practicing via Zoom sessions. They invited me to watch one of their last rehearsals, and I saw the movement for the first time. Jonathan, the choreographer, was very careful not to say too much about what he was doing or intending, protecting my own experience of the movement, and what it might inspire in me. I watched, and I wrote down notes. I made note of what emotions seemed to be portrayed, what experiences seemed to resonate with the movement, and what message was being carried.

The movement was created apart from music, so there is a purity to the dance. In brainstorming how non-dance and dance movement would interact, Jonathan and I bounced around locations and movements that this character may be interacting with, and how he would interact with them. Jonathan had this idea of the character carrying around a lawn chair, and setting it up and sitting down at random moments. All of these movements were inspired and motivated by the character that Jonathan had been ideating.

Tell me about the locations, especially the launderette? The spaces feel so empty and melancholic — was there a lot of filming in the evening/early morning?

When Jonathan, Jacob and I were ideating locations, we discussed spaces that felt isolated, lonely, yet expansive. We wanted it to feel as if this lonely character was in the midst of a vast, urban environment, yet he never encountered any other people. I’ve always been obsessed with Roosevelt Island, which sits on the East River between the Upper East Side in Manhattan and Long Island. The island is full of unique architecture: some areas resemble Eastern Europe while other places, such as Cornell’s tech campus, exhibit more modern looks. It was the perfect backdrop to use empty environments that wouldn’t be busy but still felt that they were right in the heart of the city. It also doesn’t hurt that it’s easy to shoot without a permit! The laundromat came out of an idea to use these ‘civilised’ spaces as sort of a bridge environment, that represented a direct effort to connect with other people/the outside world. We shot the exterior blue hour parking lot and the laundromat at sunrise, and the rest of the set ups the following night.

It was the perfect backdrop to use empty environments that wouldn’t be busy, but still felt that they were right in the heart of the city.

For me, the idea of carrying them, and also the lamps that have gone out, seems to evoke someone with a lot of loss in their life. What was it like trying to bring that out in the film itself? Which type of cameras and set-ups did you have to bring that across?

Jonathan, the choreographer, had concepted an idea of using lightbulbs and white onions to represent this character’s past ideas, both good and bad. He carries them around with him in a brown paper bag, continuing to obsess over what’s happened. The shot of him attempting to ‘light’ the old bulb represents an effort to re-ignite an old successful idea that has since gone out. For me, when I watched the dance for the first time, it represented a very clear process of trying to move forward, from one motion into another, to break a pattern and find new freedom. In my original intention with camera coverage, I had envisioned using an ultra-wide lens, but on the day of shooting, I realised we didn’t have that lens! This shifted things but led to the brilliant match cut that emerged serendipitously. I wanted to use static camera set ups, offering the opportunity to create a very intentional scene, and to let the eye be drawn to the action of the character, and not the action of the camera.

The music in this piece is so evocative and romantic, I’d love to learn more about how you got in touch with Keyon Harrold.

Once again, Jacob Jonas is the mastermind behind the key collaborators: he reached out to Keyon. However, this was an incredibly coincidental collaboration, because Keyon and I had met years prior on a Vevo live performance video I directed. Keyon was playing trumpet for Gregory Porter, and we just zinged. Keyon and I are both from St. Louis, and it seemed to give us a special connection right off the bat. Having worked closely with Jon Batiste, I have a special place in my heart for jazz musicians and jazz music… It carries a mysterious, almost exotic, allure for me. When I first saw Keyon play, I was awestruck! It was incredibly meaningful to me to be able to collaborate with him on this. There is nothing quite like getting to hear a complex and rich musical progression unfold in your ears that was inspired by images you’ve created. I am indebted to Keyonn’s brilliance. He really brought this piece together.

There is nothing quite like getting to hear a complex and rich musical progression unfold in your ears that was inspired by images you’ve created.

What’s it like trying to sustain the mood in the edit? What was the editing process like, especially as the visuals and music feel particularly intertwined here!

This piece was fully edited before any music was recorded. The music is fully informed by the visuals. This was a new process for me, and I was eager to learn from the experience. The edit was largely informed by the creativity of my editor, Matt Carter. We worked together on my short film for Jon Batiste’s album, and I knew Matt’s sense of tempo, visual connection, and our ease of communication would be the right fit for this project. I carried a loose intention into production of what the final piece would look like, and after I handed off footage to Matt, we got on a phone call and jammed through a bunch of creative boundaries that he could work within. From there, Matt will go away for a few days, create his first pass, and send it to me. Usually he will create multiple directions of a cut, but it was Matt who discovered the potential for this beautiful match cut! 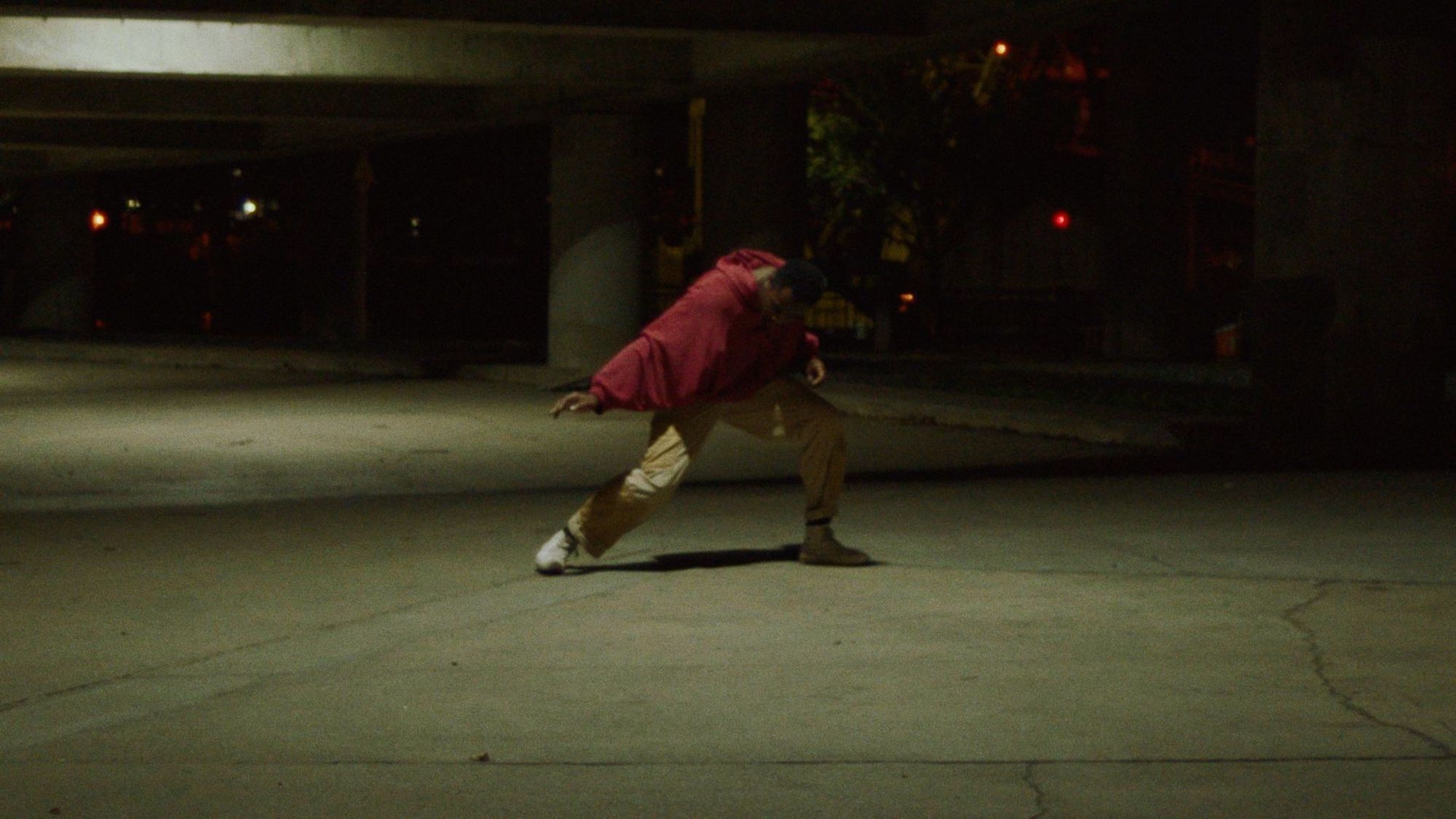 The transitions between the car park and outside are particularly accomplished, what was it like working on them and making sure that they match up?

Again, my editor Matt Carter was the one to spot this potential in the cut. The cuts really were fairly close out the gate, but it took a bit of subtle reframing in post to get the shots to match perfectly. I must also commend Jamar’s impressive consistency in performing the dance. This shows the hours and hours of meticulous preparation put in. There was no music, no metronome counting, only the muscle memory and the tempo in his mind. He performed the dance 5 or 6 times, and each pass was essentially identical.

I’ve got a few exciting projects finishing up right now, but there is one that’s got me really excited! I directed my first simple narrative short last spring, and after sitting on my metaphorical shelf for almost a year, I’m finally finishing it! It has been scored and is now sitting with my sound designer. It’s a simple, silent film about an older couple using dance as a way of finding new connection in a difficult moment. It was inspired by some friends of mine, an older couple I met who lived in the same building as me in Brooklyn Heights. Be on the lookout for Before This Ends!