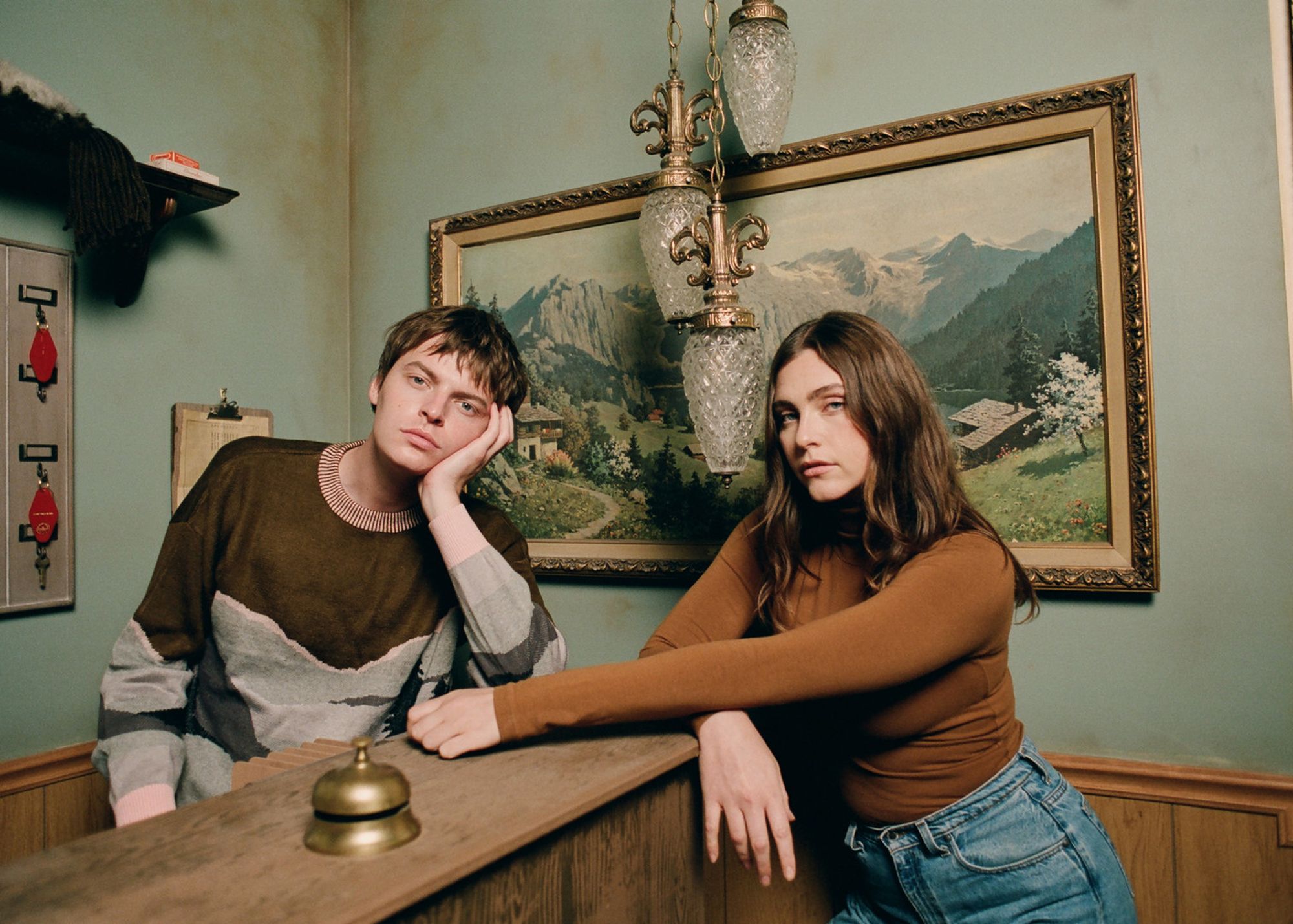 In a wonderfully paced six and a half minutes Director Bianca Poletti, working from a screenplay by Allison Goldfarbs who also stars, presents a novel spin on the awkwardness of the first date scenario in Radical Honesty. Opening with the familiar nervousness and tingling excitement of getting to know a potential suitor, things take a surprising detour towards the absurd as our prospective lovers attempt to throw off the constraints of conventional dating dynamics and construct a new definition of relationships free from the usual structure and control of monogamy. Or at least that’s how it seems at first. Set in a diner with a distinctly retro feel, Poletti’s short film cleverly juxtaposes the traditional feel of Radical Honesty’s location with the pair’s modern outlook on dating, further adding to the film’s subtle comedy. DN invited Poletti to speak to us about the various inspirations behind the film, heightening the comedy that was already on the page and why the tight deadline of a SXSW premiere was a great motivator.

Allison Goldfarb is both the writer of and actor in Radical Honesty, how did you two come to be working together and how did the collaboration flow?

I directed Allison in a music video, and we got along really well when shooting. A couple of weeks after we had worked together she sent me Radical Honesty and asked if I’d be interested in directing it and that she thought I’d be the right fit for it. I instantly loved the dialogue, how real and current the conversation felt, and that there was room for some play with humor and subtle comedy. Allison was beyond trusting and open to collaborating on the film. Her dialogue stayed as written, it’s brilliant. I worked more on building the world visually and tonally and adding in some moments to help heighten some of the very human awkward comedy of it all.

I really wanted to play with the juxtaposition of the old and new, this very retro setting mixed with this very current conversation.

As an example, it was originally written as two people on a date sitting on a park bench. I really wanted to play with the juxtaposition of the old and new, this very retro setting mixed with this very current conversation, so I changed the location to a vintage-looking diner. I wanted to add an opening scene that would help build a little energy and lead us into our conversation, so I added the waitress and the opening tracking scene at the top of the film. John Hein’s conversation with his girlfriend was originally written as off-screen but I thought it was important to have him stay in the booth. It just adds so much awkward anxiety (and comedy) to the end of the scene. Props to John, who mostly improvised his side of the phone call. 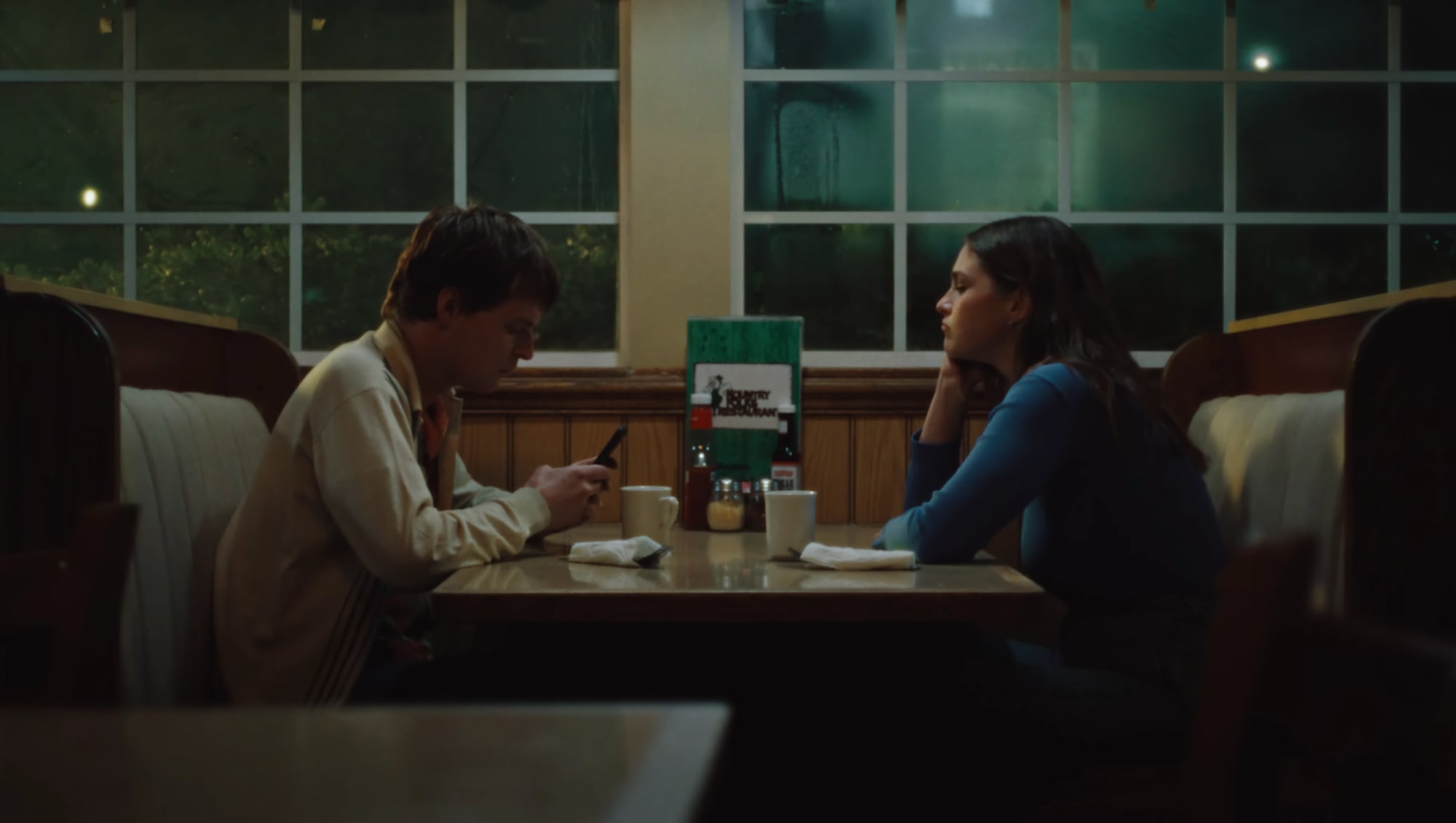 Could you tell us how you went about building the desired tone for this ultimately awkward ethical non-monogamy conversation and how the retro setting and cinematography helped you achieve that?

When approaching the film as a whole I was very inspired by White Lotus and the dinner scenes they had, that sort of very awkward but real human conversations, all shot in a CU, and where you’re unable to escape their current reality. Visually, I brought on a DP that I work with on almost all of my work, Corey C. Waters, he’s a dream of a collaborator, we have a very similar eye for beauty.

Movement-wise, I knew that I wanted to add a couple of characters, so I added the waitress and a few background actors which gave us some room to enter into their conversation whilst also showing a bit of the world we’re about to experience before getting into it immediately. I was inspired by the one tracking shot in Boogie Nights, and Goodfellas for the opening of this, and lighting wise we were inspired by Paris Texas, and The End of The Fucking World. We shot this in one overnight shoot, it was a very small crew, but a very seasoned and lovely crew.

Cinematically, Corey and I talked early on about wanting it to look like it was shot on film.

The diner location was the most important part of creating this sort of vintage, untouched older space. I originally booked the pink hotel which is a very popular diner set used in LA, but a couple of days before the shoot I started to get nervous that it wasn’t the right fit. It has a very music video feel to it, very colorful and just didn’t feel like it served the story correctly. So I decided to drive around the Valley, which has a lot of vintage and untouched restaurants and houses from the 50s and 70s. I stumbled upon the diner we used, met with the owner and we had our location. In order to stay within this retro world, I also wanted to make sure the waitress was in more of an old-school waitress look.

Cinematically, Corey and I talked early on about wanting it to look like it was shot on film, so in post we worked with an insanely talented colorist, Mikey Rossiter, and he helped get us that sort of 70s glowy film look. Same goes for the music. I was lucky enough to work with a very talented music supervisor, Abbey Hendrix, and she really shaped the music tracks we used in the end. I used all of her first pass tracks in the final edit.

I’ve read you’re pitching the film for a series, how’s that going?

It’s going really well, we’re in talks with Netflix and Hulu currently. It’s all still in development so I can’t say too much. But it’ll be more in an anthology format, and have the same kind of dark humor to it. Thematically living in a very youthful world still as well.

I instantly loved the dialogue, how real and current the conversation felt, and that there was room for some play with humor and subtle comedy.

Radical Honesty had its world premiere at SXSW earlier this year, I heard you were working up to the wire to make the deadline.

We shot this a couple of weeks before the SXSW deadline, luckily we didn’t need a lot of technical equipment and used a Steadicam for the opening scene, Arri Alexa mini for camera, Cooke Panchros for lenses so we were ready to go. I knew I really wanted Radical Honesty to premiere there, so we dug into the edit immediately and submitted a WIP (work in progress) version to SXSW. After that it took about a month to lock the edit and find the right track.

Did you find there were a lot of changes from that WIP edit submitted to SXSW to the final version?

Yes, many, Ha! We barely made the submission deadline so the original edit I submitted didn’t have music, and still needed a lot of work as far as tightening the selected performances, etc. I was so thankful and happy that SXSW allows filmmakers to submit WIP pieces.

Do you think having pressure on the edit for a SXSW premiere affected the film at all?

Yes, a bit… but I think in a good way actually. I love a tight deadline, it helps me not procrastinate, so knowing we had weeks to finish really pushed me to focus and put all of my time and energy into finishing and getting it to a place that I felt good about.

Apart from the (fingers crossed) imminent series, what are you working on next?

Fingers are definitely crossed! Yes, a couple of things. Allison and I are working on another short, and a longer format film based off of that short. I’m also working on another film pitch with Netflix that hopefully gets picked up.