It’s incredibly difficult to make a slasher feel fresh in 2022. Even horror’s mainstay franchises like Halloween, Scream and Texas Chainsaw Massacre have all somewhat struggled with this with their latest iterations. Alex Montilla, however, takes the popular sub-genre of horror back to its roots, focusing on the sheer pleasure of watching a group of characters face-off against a masked killer who, this time around, just won’t go down. Montilla embraces both the comedic and frightening aspects of a slasher, balancing every kill with a chuckle-worthy moment and the result is a film which joyfully evokes the early work of Sam Raimi. DN joined Montilla for a conversation about the making of OverKill, pulling in every favour he could to get the film made, and the challenge of overcoming a technical hitch his crew faced after shooting one of their most important scenes.

OverKill is such a fun and playful take on the slasher format, what intrigued you about playing in that world?

The idea for OverKill came about in 2013 when my brother Jason and I were in Sanford, FL at a film festival with another film of mine, Cheat Day. He came back from the bathroom and said something like, “your next movie should be about a slasher who won’t die. But, like, really won’t die.” Over the next six years, I tinkered with the script, raised money and got a cast and crew together. Eventually, in July of 2017, we were ready to go.

How much of a challenge was it pulling the short together and executing what is a pretty ambitious film in terms of effects, ensemble cast, etc?

I called in every favour I could and we got a really great rental package from Panavision, which was a Red Weapon with Arri Ultra Primes. We shot for three nights in Pasadena, CA. On the second night, the card from the camera wasn’t showing any data when we plugged it into the computer. We had seemingly lost the footage of one of our biggest scenes. By the end of night three, we were so behind we hadn’t even shot the ending. I had a bit of a breakdown, but the cast and crew offered to come back and finish the movie when we were ready. 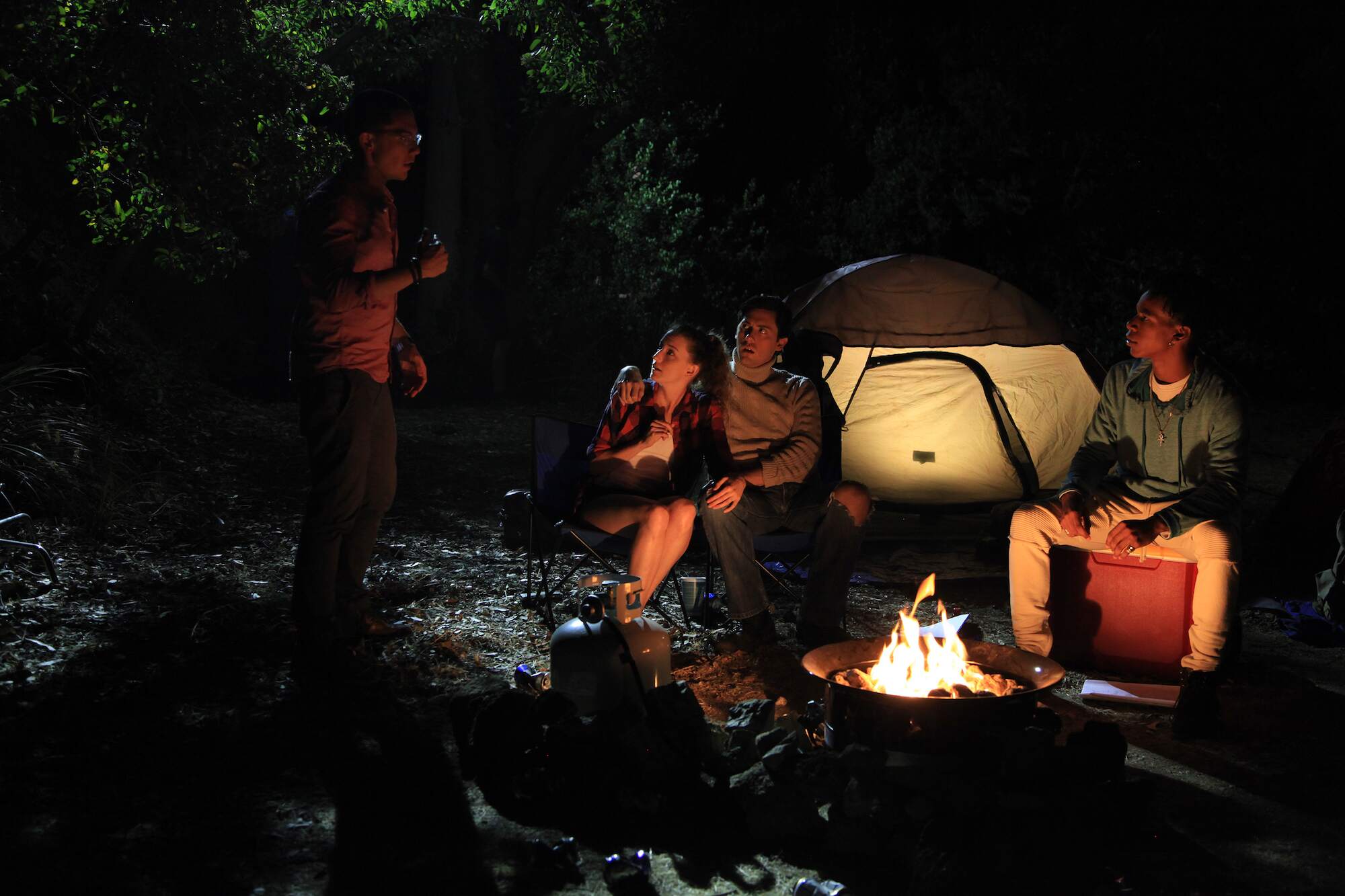 How did you end up overcoming that setback?

So, I went home and cut the movie together over the next few weeks to see what we still needed to shoot. Meanwhile, Panavision tried to recover the damaged card but had no luck. I asked if they could give it back to me before they wiped it so I could have a pass at it. I read everything on the internet that I possibly could and, much to my own amazement, I was finally able to recover it.

The card from the camera wasn’t showing any data when we plugged it into the computer. We had seemingly lost the footage of one of our biggest scenes.

I edited in the missing scene and the movie immediately felt much better. In late September we got back on set and finished the movie, getting lots of little details we missed the first time, including the ending. I edited for months and called in many more favours from post-production people to get it finished the right way, including the amazing sound company 424 Post with whom I worked on The Muppets.

How has it been seeing an audience react to the film? Without spoiling anything, there are so many twists and turns within the narrative that it really feels like a film that’s meant to be watched with a group of friends.

The movie finally premiered in late 2019. With all of the difficulty of production, I thought for sure the movie was going to turn out poorly, but audiences around the world have really seemed to dig the blend of horror and comedy. It may have taken years off of my life, but I’m glad to say that I made an entertaining movie.

It’s a film that very much plays with audience expectations and understanding of the slasher format, did that make writing the screenplay challenging?

I don’t know if I’d say challenging. In fact, I think it’s a great shortcut when you can play with genre; when the audience is familiar enough with the typical characters and plots. Using tried and true iconography saves a lot of time with the setup. The script basically starts with “so, you know slasher movies, right?” and goes from there. My only job after that is to twist things a little here and there.

What slashers, if any, did you draw upon when initially developing the idea? Do you have any particular favourites from the genre?

This being my first slasher, I wanted to make sure to do my research. I re-watched all of the Friday the 13th movies, took little tropes and gags from those I thought could lend themselves to a comedy and tweaked them a little. There’s a little Michael Meyers in there too, but the summer camp slasher sub-genre has always been my favourite. I love the Jason movies. A Nightmare on Elm Street 3 and 4 are amazing… not really slashers though I guess? I recently watched The Burning for the first time and really enjoyed that. The House on Sorority Row is great. I loved All the Boys Love Mandy Lane, but I’m not sure if it’s as good as I remember or if it’s because I got a DVD of that when it hadn’t been released in the states yet. Maybe I’m just a Mandy Lane hipster.

How did you approach OverKill’s visual effects? What was the balance between practical and digital effects?

I knew I wanted the visual effects to be mostly practical and then use CG to enhance when necessary. Part of what took so long to get the film made was I couldn’t find anyone to do the practical effects for our budget, which was next to nothing. I met with some really big-time people who all said it was going to cost more than the entire budget of the film. I was extraordinarily lucky when I was put in touch with Brittany Fontaine and Marcel Banks. They, too, are big-time special effects artists but they liked the project enough to come aboard and give it a go. And they killed it, pun intended! I honestly could not have done it without them.

I think it’s a great shortcut when you can play with genre. Using tried and true iconography saves a lot of time with the setup.

And last but not least, what can we expect next from you?

I’m constantly making things. I have a feature script I co-wrote that’s been in and out of development with various production companies over the last few years, so hopefully something happens with that. I have a comedy short film set in the world of porn that I’ve been making off and on with some friends that I’m hoping to finish this year, it’s all improvised so it’s been tricky to mould. On the horror front, I just came up with another comedy slasher idea I’m hoping to make pretty quickly and then a big-budget short/proof of concept for a feature I co-wrote that takes place during World War 1. So, I’m busy! But, as with all indies, it’s a slow process to raise money. I’m waiting on that… or attention from the right people to be hired to make it big. Whichever happens first.