Set during the summer holidays in Norway, Mauritz Brekke Solberg’s short drama Juli. (July.) is about a group of old high school friends who reconvene to reminisce over their previous shenanigans and inform each other of what the future holds for them. But when a misguided moment of playfulness turns into something sour, an important decision must be made. I’ve labelled Solberg’s film a drama in our title but truth be told it could easily fit the mould of a thriller, dark comedy or even horror at times. It’s that flexibility around how it plays with the parameters of genre that make it such a fascinating watch. DN spoke with Solberg about the creation of his short film, transposing the feeling of summer timelessness into a screenplay and the constriction of the single-take tonal shift that turns the film on its head.

Juli. has a such a great mix of playfulness and tension, what inspired you to make it?

I grew up in perhaps Norway’s largest student city. In the summer, the students are gone and on the hottest days it’s so deserted that you often feel like you are in the apocalypse. You are alone against the world and time is experienced differently. I wanted to create the feeling that time stands still, like a single long summer day. By jumping in time and place between each scene, we play tricks on our sense of place and the film appears more fluid. This creates an atmosphere that feels alluring, youthful and delightful. But when the unpleasant situation arises, you want to get away from there as quickly as possible.

I wanted to create the feeling that time stands still, like a single long summer day.

I think it was the summer between seventh and eighth grade that I participated in my first (and only) window pane smashing. There were six of us present and we all ran away. No one thought to check if anyone was home in the house. Later I thought about how a similar situation would have turned out differently if we were more mature and more morally responsible people. 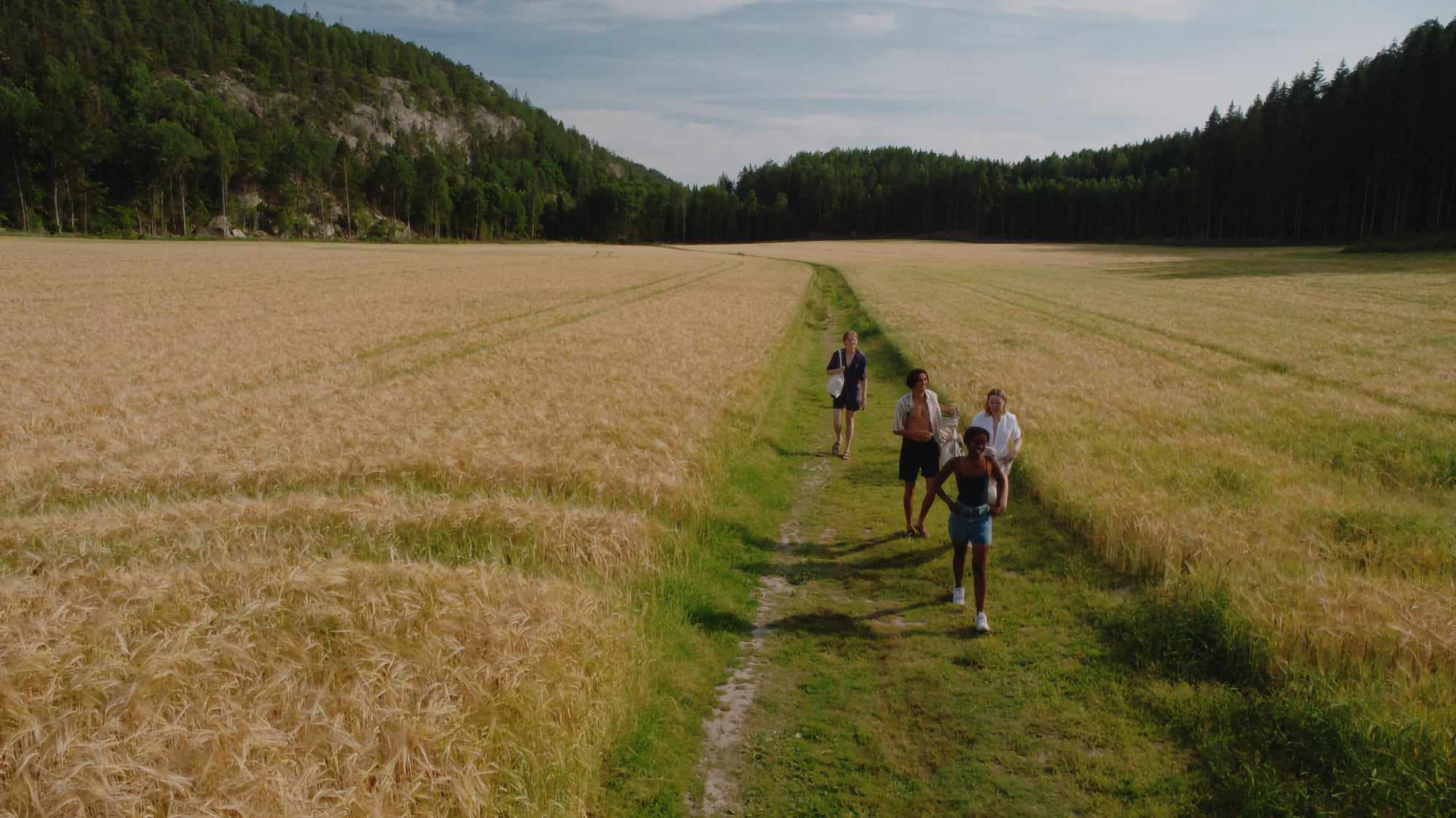 The combination of these ideas laid the foundation for the story I wrote together with my writing partner Daniel Schwarz. We wanted to explore things like group mentality and moral responsibility, but in a setting where the surroundings also played a part. We wanted the audience to feel the pressuring heat the characters are feeling. We also wanted the world to feel like it belonged to our characters so an important part of the preparations was to find unique locations that could be shot in grand wide shots without any other people interfering.

The location is perfect for the plot. Where did you shoot, and how long were you there for?

We shot in a small town called Halden in east Norway. This was my Producer Rebekka Rognøy’s home town, so we were able to receive funding from the municipality to go shoot there. The film heavily relies on outdoor locations so we used the first three weeks of summer to scout, while the shooting lasted for four days.

When it came to crewing for Juli., were you bringing in collaborators that you’d worked with before?

The team was quite young but consisted of people we have built up a relationship with over time. This was my first time working with my DP Jørgen Klüver, but we quickly found good chemistry and it resulted in beautiful imagery.

And for the cast, how did you build that feeling of a cohesive group of friends?

The cast are young talented actors from Norway, one of them having never played in a film before. It was important to us to find a group of people who worked well together, so some of the actors knew each other from before and had recommended each other. When we found our ensemble we made sure that they spent enough time together before the shoot, so that no one could tell that they had not known each other for a long time.

Nailing that one-take was a make it or break it moment for what we wanted to achieve with this short.

That said we didn’t have time or budget for more than two proper rehearsals. I knew that three of the actors had more experience and I therefore focused more on the last one getting comfortable. We also rewrote some of the dialogue together with the actors so that they would feel more natural performing it.

I wanted to ask about the tonal switch in the film, was that a challenge to work out in terms of its execution?

At a certain point in our film things switch from pleasant to unpleasant all of a sudden. To really build that tension I decided that I wanted to try a single-take shot for the dramatic five page scene. We hired the local Steadicam legend Atle Holtan for the job. I will say that nailing that one-take was a make it or break it moment for what we wanted to achieve with this short. Seeing the actors put on such performances and seeing it all come together with sound and music was something I am really proud of.

What motivated you to construct that five-page scene as a single shot? And how many takes did you have to do before you got the one used in Juli.?

I had played with the idea of doing a one-take to minimize the shots needed for shooting the climactic scene, but after watching Victoria by Sebastian Schipper I became convinced that a single shot was what this film needed. We planned and rehearsed for a continuous fluid and moving take, ending up with the film’s most intense moment. As a first time viewer it can be hard to spot the one-take, but you will definitely feel it.

The take used in the film is the seventh and last take, if you count the extra rehearsal take we took without recording. On take three one of the actors accidentally broke an old window with his hand, and on many of the takes the timing with the car was completely off. It’s always a compromise by doing it this way, and you never get everything to work exactly as you want, but hopefully the experience outweighs some minor flaws in the details.

I just recently shot a new short called Offline together with Daniel Schwarz. It’s a dark comedy taking place in the commercial film industry, and we are currently in the editing phase. I’ve also received funding from the national film institute to develop a television drama, which I’m also writing together with Daniel.