Lado Kvataniya’s ‘Burn’ Is a Caustic Warning Against Our Collective Disillusionment at the Hands of Propaganda. 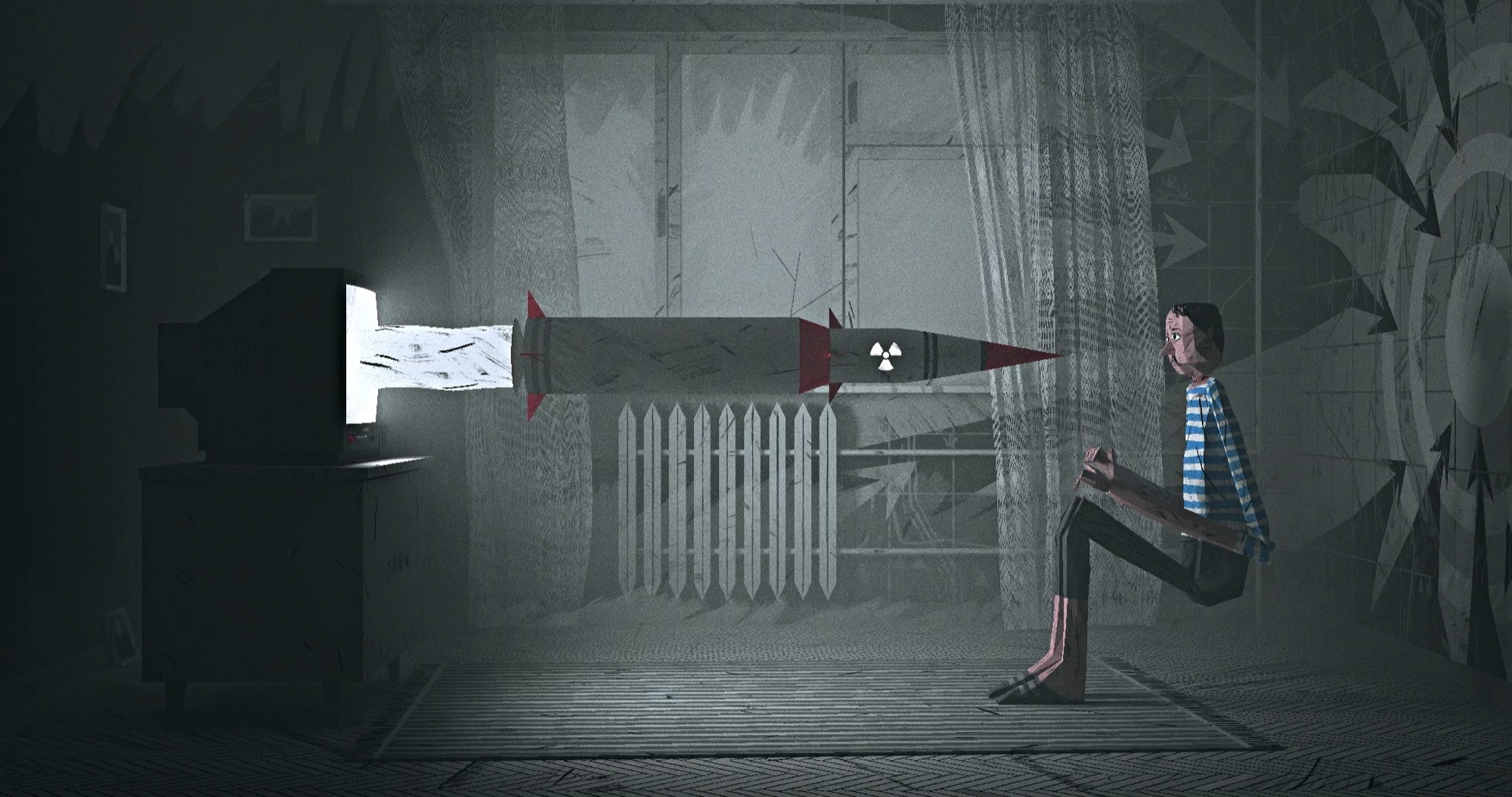 As a regularly featured director on the pages of DN (today marks his 10th appearance) Lado Kvataniya has time and again shown himself to be no stranger to broaching difficult and controversial topics in his biting work. His latest release, Burn made for Russian singer-songwriter Monetochka is an acerbic polemic which uses its animated visuals to comment on the destructive nature of propaganda which lulls people into a state of inertia, thereby turning everyone into passive objects with little purpose besides feeding the machine which perpetuates the cycle. Collaborating with visual artist and animator Sergey Kolesov, Burn sees this process transform a populace into inanimate objects whose future is then bartered over by soulless corporates. Kvataniya, Kolesov and Monetochka’s shared views on the state of the world and the pernicious nature of propaganda, coalesce into a clarion call against the desire to disconnect from the turbulence of reality, regardless of the understandable self-preserving nature of such inaction. Following Burn’s recent release, we took the opportunity to sit down with both director and animator to discuss how even the seemingly boundless medium of animation left them unable to broach all the desired elements of the conversation, Kolesov’s reasons for embracing a lo-res approach to the animation process and the organic method of collaboration between the two of them.

What issues were you looking to bring to the fore with the making of Burn?

Lado Kvataniya: We are in the next era of the transformation of society – at the time of the formation of a new type of human being. And when a person, not wanting to fall into the zone of turbulence, for reasons of his own safety, chooses to disconnect his consciousness from reality, trying to pretend that nothing is happening – he literally turns into a piece of furniture. At first glance, this defence mechanism seems acceptable. But acquired indifference becomes the fuel that is being used by those who benefit from it. Clumsy animation adds to the general spirit of the video

Acquired indifference becomes the fuel that is being used by those who benefit from it.

Sergey Kolesov: I gladly accepted Lado’s invitation to take part in the work for Burn, because recently I have been actively rummaging through actual topics and attempting to structure my thoughts about what is happening in the world through creativity. In the beginning, my role was to draw the keyframes of the clip enabling animators to recreate the story in motion. But in the process of searching for the characters’ images and the general mood of the video, I got so involved that in the end I created all the characters, painted them, and then worked on assembling the scenes and animation. Since I have never done animation on such a scale before, animating scenes and characters was something new for me. I think that my angular, ridiculous and, due to the lack of much experience, clumsy animation corresponds to the images presented, their forms and the general spirit of the video. 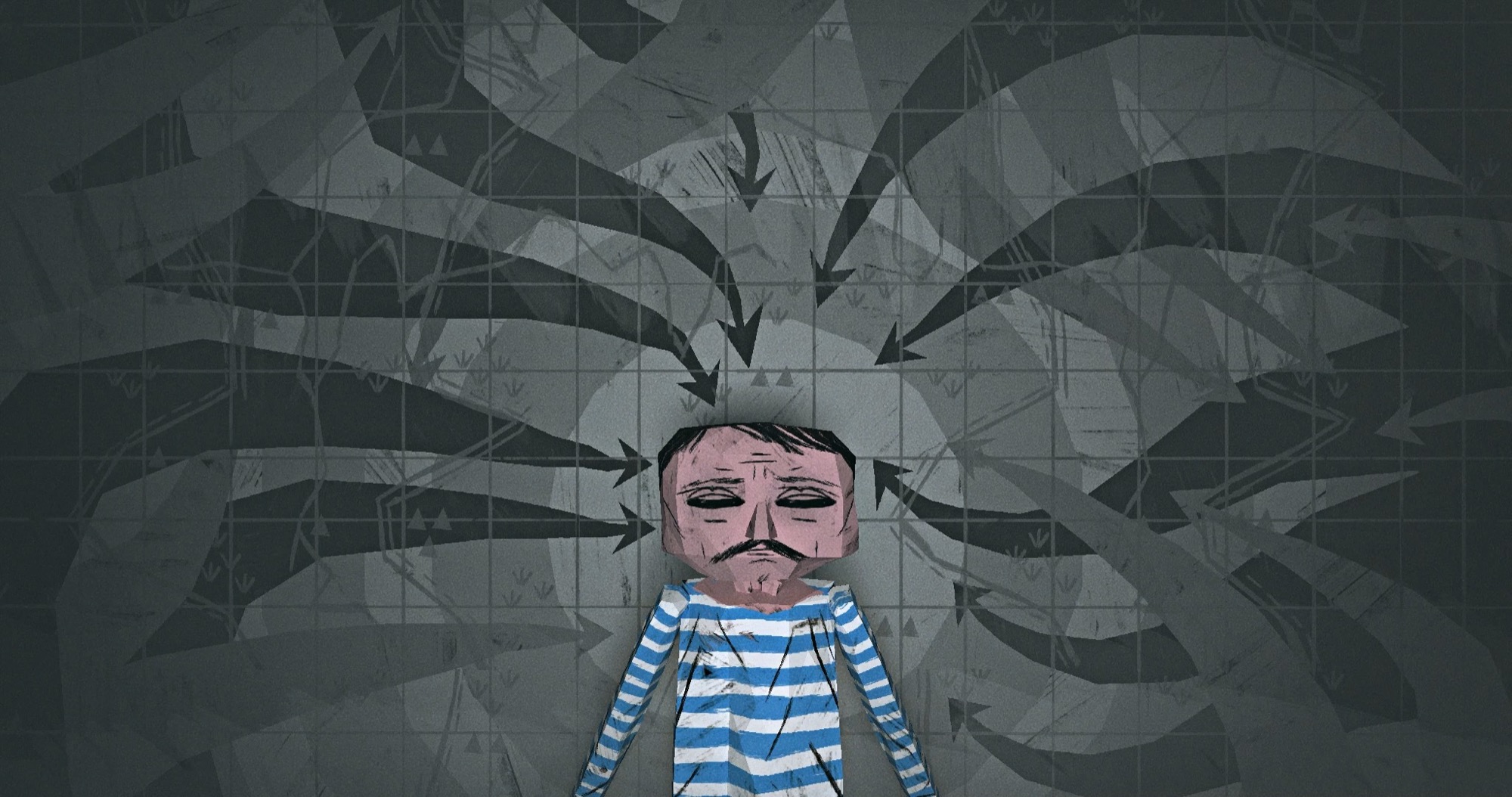 Lado, you deploy such a wide variety of styles and techniques within your body of work, why did you choose animation as the method to deliver this polemic project?

LK: The form of animation was chosen exclusively for budget reasons. At some point, we tried to implement the script in the framework of physical filming in the real world. But due to budget restrictions, as well as for the safety of artists who could be pursued for various political reasons, we decided to stick to the form of animation.

There are restrictions in animation. When you meet them, you understand that not everything can be brought into life within the form that seemed absolutely free for imagination.

Moreover, I’ve wanted to work in this format for a long time. I often end up with multi-genre filming and combine live shooting with animation, using both the digital format and film. This time I wanted to move away from all third-party tools and concentrate on the animated form. In this case, you have a huge number of possibilities for imagination. But at the same time, there are restrictions in animation. When you meet them, you understand that not everything can be brought into life within the form that seemed absolutely free for imagination.

How did you and Sergey collaborate creatively to conceptualise Burn?

LK: Collaboration with Sergey, in my opinion, turned out to be fruitful and successful. Sergei has a unique style. We wanted to create an imperfect, angular and sketchy world. We had long discussions about the aesthetics of animation. I wanted the graphic part to be painful to match the modern reality, turned inside out with the guts, our worldview from what is happening in Russia and the world. As a result, our world has taken shape and it seems that if you run your hands over our heroes, your palms will be covered with hundreds of splinters.

You could easily get carried away by the form, beauty and aesthetics of our story and lose the meaning.

In the process of work, I completely trusted Sergey, his vision, understanding and aesthetics. It was absolutely, clearly, distinctly formulated – Sergey was truly organic in it. My task was to follow the meanings that needed to be conveyed in particular scenes. It was important because you could easily get carried away by the form, beauty and aesthetics of our story and lose the meaning. I think we managed to find a balance. And I am incredibly glad that I met such a great artist during my work.

The flashes of colour really punctuate the film’s overall dark and muted tones, is there a deeper significance to those vibrant bursts?

SK: Actually there is no colour coding. Some of the colours like red are working like little accents to bring the attention of a viewer to the objects or details which are important for a particular scene. Besides, considering the title of the song Burn, I initially was thinking of a grey/red gamma, where the overall grey is like ashes filled with tiny flashes of smouldering red.

What dictated the ominous design of the characters and in particular, their halted movements?

SK: The design came up quickly. Since producing the hi-polygonal characters would take a lot of time, and so would producing a 2D frame-to-frame animation, I tried a low-polygonal approach since I have been working in the game industry. It is like pixel art but in 3D. It was easy and quick to create the characters in this manner, which allowed us to concentrate mostly on setting up the scenes.

The minimal, jerky animation was partially an attempt to make them not ‘actors’ but rather puppets.

A rough and untidy 3D mesh was chosen for the purpose of giving them a look of paper toys which were picked up from a trash bin. Like an old group of actors who are playing one play for all their lives. The same applies to their movements. The minimal, jerky animation was partially an attempt to make them not ‘actors’ but rather puppets. And it also served the purpose of bringing some disharmony into the action.

Lado, as such a prolific filmmaker what can we expect to see from you next?

LK: Right now I am working on a new feature film, I’m at the stage of writing the script. In the near future we will have a big piece of work coming out, made practically by the same production team that worked on Burn. We will release a new, large, important work for me personally and for everyone who takes part. It will appear in the coming weeks. We hope to show our work to you as well.