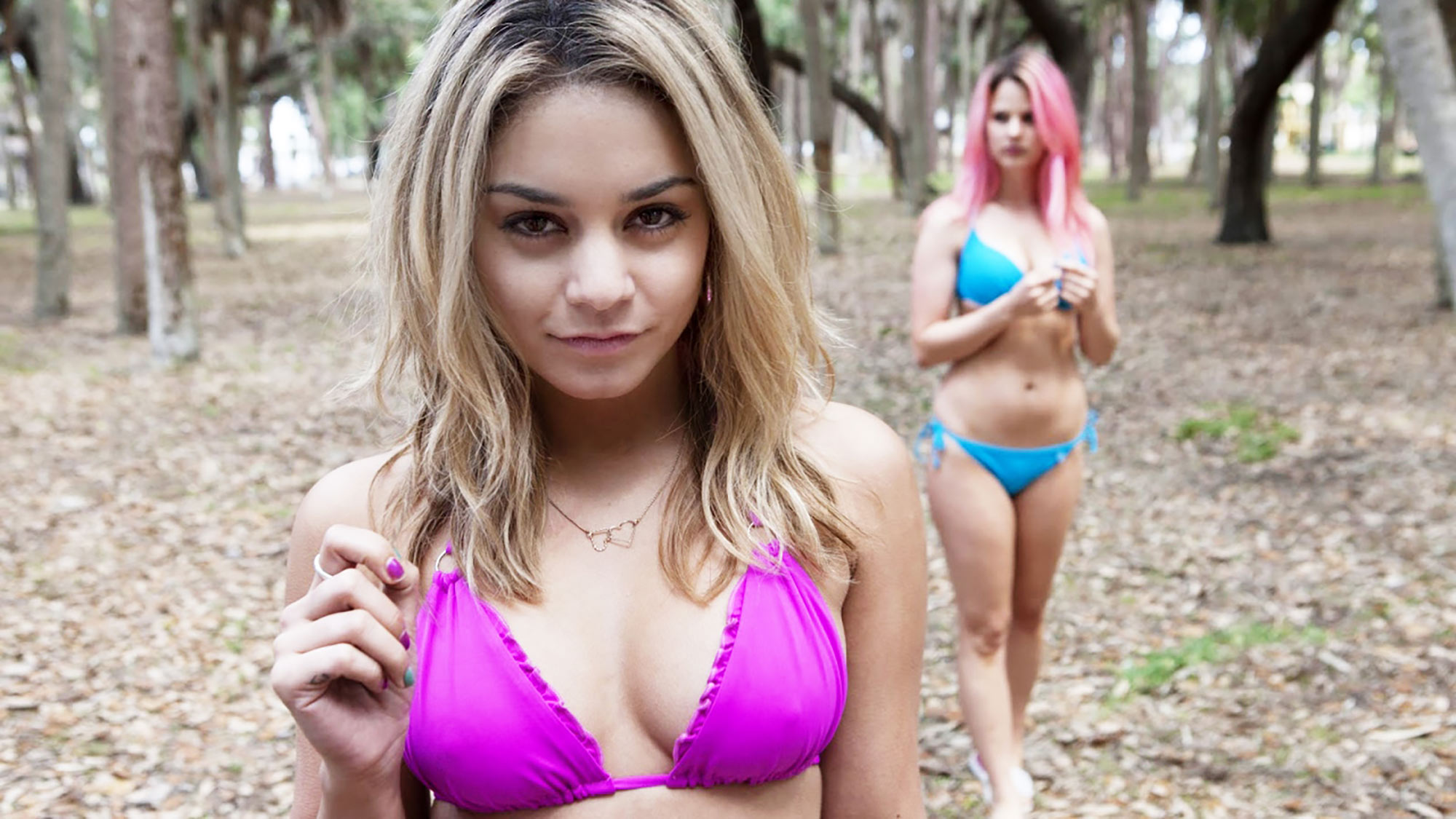 If you listen to MarBelle’s Trash Humpers conversation with Harmony Korine he sounds like a pretty ‘normal’ guy. His films however would tend to suggest a completely different the reality lurking just beneath the surface. It’s no secret that Korine’s work is quite divisive (if you don’t believe me check out the comments under El Vez’s Snowballs post) and often falls into extremes of love or loath for its viewers.

Spring Breakers heralds what is being described as Korine’s most mainstream film to date. Personally I’d have to disagree with that categorisation, more liking is that it’s a tag applied to the film because of the presence of Disney’s finests, Selina Gomez and Vanessa Hudgens within the cast. The title pretty much sums up the film’s contents. For those unfamiliar with the custom, Spring Break is a singularly American past time, the premise of which seems to be that the vast majority of US university students go away over the Easter holidays to a hot beach destination. From my (limited) viewpoint, the poor go to Florida, the rich used to go to Cancun but now go to Boracay and the people in the middle fill the Cancun void. Once they arrive, they basically drink excessively and in between pour booze all over themselves (what a waste). I assume they also take loads of drugs but can’t say I witnessed that. I did however see girls remove their bikini tops and invite boys to pour drinks over their breasts, whilst the boys behave like they’re ballers when in reality they’re being (to use their vernacular) total douchebags. If you’re wondering how I gained my first hand insight into such japes, I can confirm that some very annoying Spring Breaking Americans irritated me whilst I was in Boracay. In case it’s not clear, I found the whole real life experience of Spring Break exasperatingly dull.

Spring Breakers the film follows four girls (Hudgens, Gomez, Rachel Korine and Ashley Benson who manage, against the odds, to go from their shit hole, one horse town to Florida on Spring Break. Once there, they get up to all the usual Spring Break shenanigans including sniffing coke off naked women. Unfortunately for them they get caught and end up in prison in just their bikinis. They’re bailed out by Alien, a real life gangster rapper played by James Franco. Undeterred by their brief spell in the slammer they follow Alien in to a life of crime.

Let me be clear; Korine could have made a really good film if he hadn’t allowed himself to get distracted by fake tits, massive arses and girls throwing alcohol around (such a waste). There were parts of the film detailing teens frolicking on the beach which could have been lifted straight from Cunningham’s Windowlicker promo – the light saturation and cinematography reminded me of the infamous beach scene, minus the grotesque face. As you may have gathered from my Boracay experience, watching stupid kids do stupid shit is trying at best and really fucking boring at worst. Korine dedicates around a third of the film to following the girls around when instead he could have wrapped it up in a ten minute montage and we’d have still got the measure of the girls and the debauched Spring Break experience. 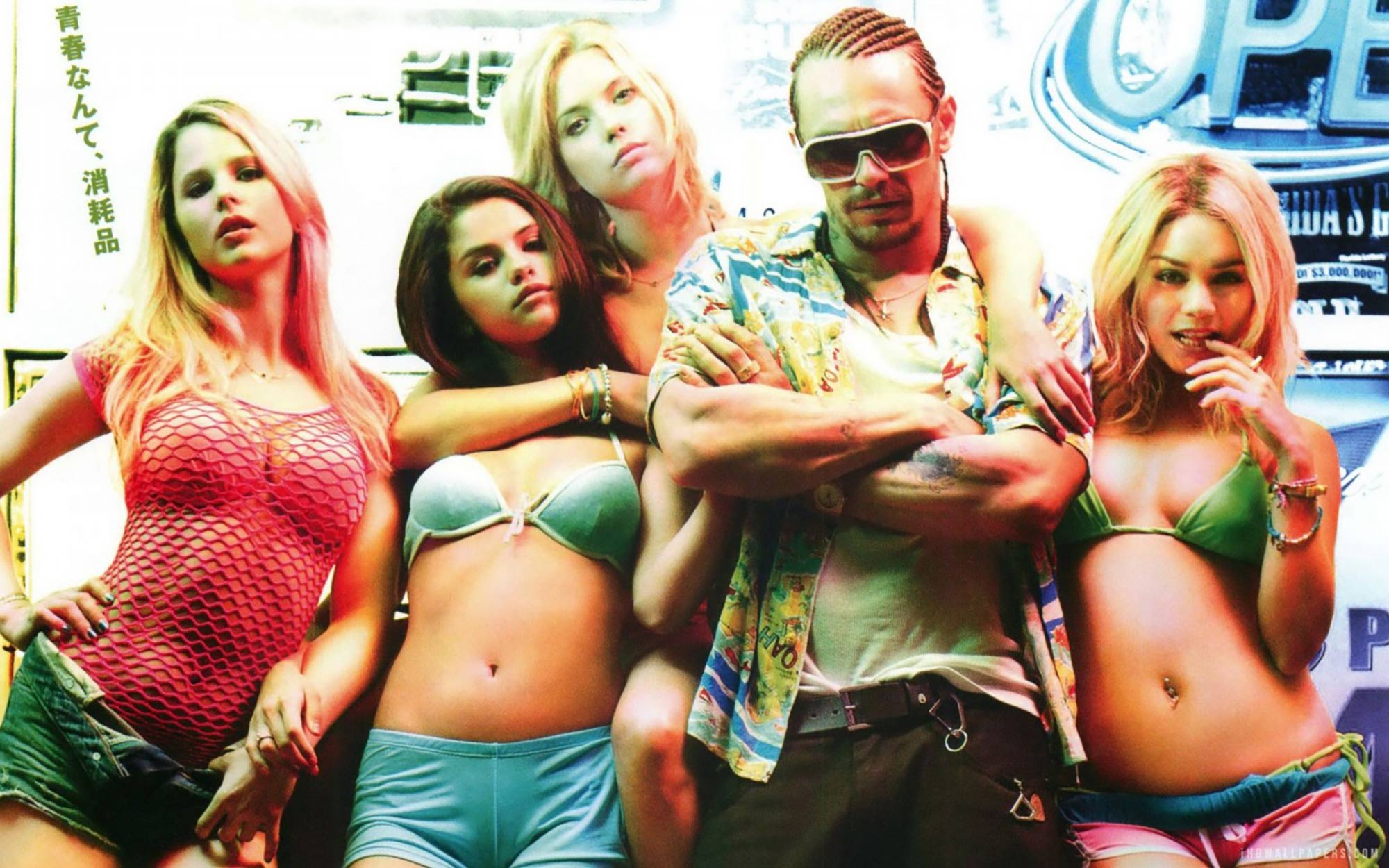 Franco however makes this film and holds you mesmerised every second he’s on screen. As with every role Franco takes on, he throws himself so whole heartedly in to it that you wonder why he doesn’t sport corn rows and grills all the time. Alien is the gangster as described in hip hop. He has a slick drugs operation, guns on his walls and most importantly any Calvin Klein aftershave he wants. The girls become enamoured with Alien and his lifestyle whilst the watcher wonders what his motives are for rescuing the girls from their hopeless situation. As times goes on, the girls shed numbers until Alien is left with his core girls who are just as gangster as he is. Whilst Franco is amazing the girls could be played by anyone in a bikini. I can only assume that Gomez and Hudgens took on the role to shed they’re squeaky clean images. I’m not sure if it’s worked or not as Hudgens’ acting comprises licking things in a provocative manner whilst Gomez cries and rings her grandmother. Rachel Korine obviously is pretty much a shoe in for any film her husband makes, whilst I’ve never heard of Ashley Benson and I don’t think she’ll be winning awards any time soon.

Ultimately, despite assertions to the contrary, this is not a mainstream film. The themes are too uncomfortable and at times the cinematography feels too exploitative. Spring Breakers is mostly entertaining, but I won’t be imploring others to strip down, get their drink on and join the party.