I’ve seen many a strange thing occur on the pre-dawn streets of London, which perhaps explains why the presence of a mysterious angel winged girl, a shirtless power walking man and a nun in a wheelchair in Edward John Drake’s music video for Klangkarussell’s All Eyes On You doesn’t actually feel beyond the pale to me. What is extraordinary, is the choreographed precision of the director’s VFX heavy 9 minute single shot video, throughout which his bizarre collection of characters intersect. With my mouth fully agape I invited Drake to tell us how a drunk girl in an Irish church sparked the inspiration for his impressive end of days narrative.

Klangkarussell reached out with the track and we leapt at it from there. My first time listening to it played a role in the gestation of ideas – I was literally standing in a beautiful Catholic church in Ireland with cosmic-like stained glass windows for a ‘Christmas-in-July party’. Behind the tabernacle was a drunk girl in angel wings being helped by a rough looking young woman, and later on in the night I was introduced to a pregnant nun. Yeah, only in Ireland.

The eight minute track came from a personal place of pent up frustration according to the guys, and I totally agree. The lyrics are an elegy-like indictment of people Andrew WK would label as modern hypocrites/fascists – excuses for everything, infinite wisdom on the world’s afflictions, though nary a solution or optimistic thought when it comes time to step up and do their part. The way All Eyes was mastered at that stage was a little less lyrical and even more spoken word. The idea of having an omniscient narrator [the pauper], simply to provide a personification of these types of individuals, was handed to me on a silver metaphorical platter.

The treatment was simply, “An unknowable moment at the end of the world.” It then went on to detail ins and outs of the narratives, and what is “real” and what is an extrapolation of his state of mind. I really hope the treatment never leaks – our aim was for the audience to project themselves onto each of the characters and find their own meaning. A circle of friends all saw the final cut before it was released and each had somewhat different interpretations of the narrative/message, which was encouraging.

In the space of 5 days we got the green light, went through pre-production and then we were on set for a soaking Saturday morning in Brixton. We delivered 7 sexy days later after late night calls between VFX supervisor Chris Staehler in LA and Darius Family, the colourist, in Melbourne. 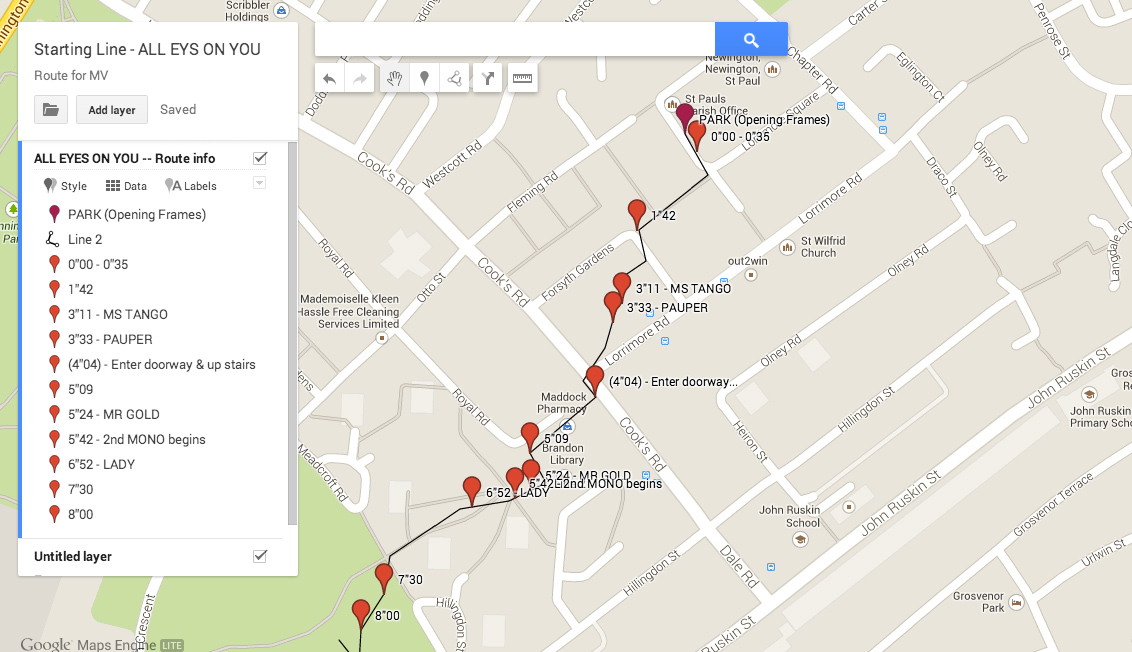 The real MVP was Matt Allsop – steadicam operator. Matt’s operated with me in the past on UK projects. We’ll one day find out the man has giant’s blood in him. He was flying a Red Epic with an old (really heavy) 24mm Kowa lens, all on an Ultra vest/arm/sled with James Matai pulling focus inches away from the monitors. Those guys are badass – they had seven hours to memorize the 650 metre route before we went for the first of five takes with a 15 minute set-up time between each. In the rain, with actors missing their marks, PAs ducking out of frame at the last second and an abominable director yelling in their ears… Matt and James compensated, pivoted and rolled with the punches like Manny Pacquiao when he took on De La Hoya. Actually, that’s the best way to put it. We were punching well above our weight and those guys just freaking killed it. To put it another way: James is super quiet, kind of like Groot. Matt is Rocket. Both had this symbiotic way of moving.

Also, I’m lucky I can be little picky with what projects I take on now, though it’d be a disservice to pass up the opportunity to say our [Island Records] commissioner Japer Waller-Bridge was excellent – a perfect commissioner/collaborator all the way. We’re all team Jasper now. The Director of Photography, Nick Morris, is going places. Archie Johnston-Stewart was a fantastic producer – always showing initiative, something that isn’t always the case on bigger shoots. The way both of their minds think is fantastic, and we were all on the same wavelength from the start when it came to references of scenes, blocking and what to get for craft services.