Cinema is littered with characters who can knowingly look back and exclaim, “That was the summer/weekend/night that changed everything!” But as in life, much rarer are those who are aware in the moment they currently inhabit that they balance on the cusp of the nostalgic past and a new, unknown future. Jordan Michael Blake’s NYU thesis short Yeye Bells Shiver speaks to the latter state of being, as it takes us on an ethereal, bittersweet journey through the suburbs set on the last day of summer.

What was the initial spark behind the concept for Yeye Bells Shiver?

I was reading Something Wicked This Way Comes at the time, which is this Ray Bradbury book that has the best few opening chapters. It ends up being about this haunted carnival that comes to town, but the first chunk of the book is just about these two best friends, the end of Summer, the beginning of Fall and this lonely father who looks at the boys with all this sad nostalgia, sort of wishing he could be them, but knowing his time is past. He’s sort of a tame Rabbit Run character, and the kids are just so happy and free, it makes his side of things even sadder. I was getting ready to graduate, and was drawn to the sadness I was feeling about looking back on good memories.

I had actually started reading the book when I was a kid, but for some reason, I never finished it. So I was reading it again, and was relating to the dad character this time around, but still feeling like a kid at the same time. I suppose that’s where the emotional centre of Yeye Bells Shiver came from – this idea of being torn between the past and the future, and wondering about nostalgia while it’s happening.

I also just wanted to make a high school movie that felt big – the way things feel when you’re there. Like everything is so important. Because, looking back even, that stuff is kind of important, and I feel like adults really brush all that off. I think high school stays with you. At least, I didn’t have a big thing where I went off to college and found myself or anything. Even with girls. The idea of making a high school movie where the guy didn’t get the girl was very appealing to me.

How did you approach translating (and maintaining) that feeling of a present nostalgia into a living, breathing film throughout the various stages of production?

This was my thesis film at NYU, so there was a long, protracted pre-production process because of the class structure there – mainly a lot of jumping through hoops – but it was good. I wrote the script in August, Summer of 2011 and didn’t shoot till April. But it wasn’t necessarily a bad thing, because I was super ready to finally shoot the thing once it was time. I had a great professor, Deborah Rienisch, who helped me through the whole thing, and I pretty much knew what kind of movie I wanted to make from the beginning. At least I knew the feeling.

I pretty much knew what kind of movie I wanted to make from the beginning. At least I knew the feeling.

My DP, who I still work with, and is a great Director in his own right, Fidel Ruiz-Healy, was also a huge collaborator. We have a company together now – The American Standard Film Co. – but as opposed to my previous shorts, I wrote this script mainly as chunks of dialogue, so I didn’t have the whole thing storyboarded in my head like I usually would. Smoke bombs were his thing, so I threw that in. And when I decided to be in the movie myself, the storyboards became an even bigger deal. Together, we very thoroughly boarded the whole movie. Actually, the actor who plays James in the movie was our storyboard artist – Ricardo Tomita. He’s also a great animator who makes these funny, strange movies. And I think he mostly does the voices himself.

Principal photography lasted 6 days, over the course of 2 weekends. Then we took a skeleton crew up to Pennsylvania about a week later to shoot the smoke bomb stuff, which would have been illegal in New York. Production itself was horribly stressful, and we almost got shut down on a number of occasions, because we didn’t have any money to pay for locations, and there was a lot of rain, but we pushed through it, and maybe because I was in some state of shock throughout the whole shoot, my performance turned out okay.

Post took even longer than pre-production, mainly because I was cutting by myself and balancing the edit with freelance work. It was a whole different mess, because I was going through a breakup during production, and afterwards, was completely alone for a number of months, just buried in a dark room with all this footage of myself. It took a year and some change before I had a finished cut with sound and color. Certainly a weird and funny experience. I also had just graduated college, so I really felt like a different person than the kid I was when I wrote the movie. But I think that helped the film; maybe gave it a bit of an edge that might not have been there otherwise. Exploring that space between childhood and adulthood – that’s where I was, so it was a well suited project for me at the time.

What was your gear set up for the shoot?

My DP had just bought a RED Scarlet right before our shoot, so we used that. We were actually a little nervous the camera wouldn’t ship in time, because he was one of the first people to order one. As far as lenses, our gaffer – Lori Dinsmore – had just bought herself a set of Zeiss CP.2s in partnership with our DP, so it worked out pretty well. But because we hadn’t used the camera before, there were a lot of concerns going into the shoot about getting proper exposure for our night exteriors. In the end, I think they turned out pretty well. Noisy sometimes for sure, but it adds a nice texture to the movie, for the most part. 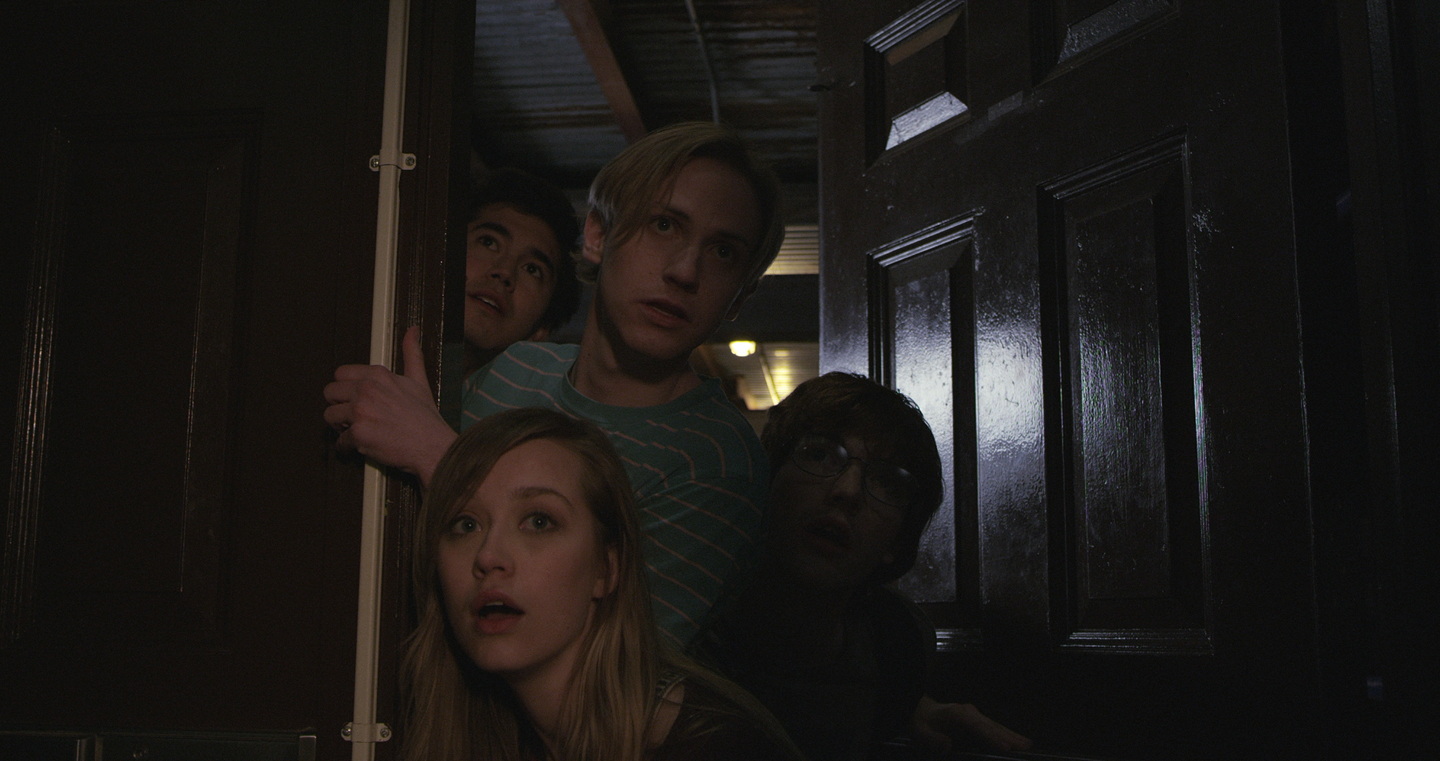 As well as directing, you also star in Yeye Bells Shiver. Why did you decide to step in front on the camera? What was the experience like of directing yourself vs solely being behind the camera?

I didn’t intend to be in this movie when I wrote it, but I suppose I sort of doomed myself by writing a script that was all about my high school friends. I tried casting the movie for months, and must’ve seen more than 200 actors, but in the end, I just decided to do it myself and put all my friends in the movie. When I was auditioning people, I’d see a good actor or actress, but finding a whole group of kids that seemed like best friends wasn’t really happening. So, it was the easiest thing to do, and I pretty much knew how I wanted the movie to be, so it made sense.

I don’t know how much I’d say I directed myself, but I wrote the script, so I knew all the lines without having to memorize them, and I knew what each scene was about. I’d never acted before, so I pretty much just went with my gut. I’d set everything up like I normally would as a director – which is the hard part – and then I’d hop in front of camera when it was time to go. Honestly, acting was the easy part of this movie, because between action and cut (which I had my AD call out for me), I was allowed to stop thinking about production – whether it was going to rain, or whether we were going to get kicked out of our location, etc. The acting part was peaceful, and I tried not to beat myself up too much about it.

In terms of directing the other actors, there’s no easier way to set the tone on set than to be in the scene yourself. I think everyone just followed my lead, except Tyler Walker, who played Jesus – he’d just do whatever he wanted, which was perfect for the part. Also, things like the party scene were fun, because everyone but me just got to have a great time. Like the actor who offers me a drink, Zach Block… He did something different to mess with me each take, which was great. He was actually our grip, and I hadn’t really met him, but we needed someone for the part and the crew wanted to throw Zach into the scene. It must have been great for him, because he just got to slap and punch and fart on the director. You can tell in the movie that I don’t know what’s coming – there was a take where he didn’t even get through his lines – he just walked up and vomited… That was super fun, and added a lot to the movie.

What can we look forward to next from The American Standard Film Co.?

Lots of stuff coming up… We have a couple new shorts about to go out on the festival circuit, which is exciting. There’s one that I directed, which gets quite a bit darker than Yeye Bells Shiver, called Harry & Judy. It’s about these two fundamentalist Christian teenagers that get hitched, and I play the husband, who basically looses his mind and becomes the wrath of God, so I’m really looking forward to that coming out. Then we have another short I helped produce, which is basically like Gun Crazy with kids. That one’s called A Band of Thieves, and it’s a ton of fun.

We’ve also got a new music video that’ll drop in December, which we’re shooting right now, We’re building this insane Jodorowsky style pyramid set and working out all sorts of choreography. It’s exciting, and all three of us here at The American Standard Film Co. have a number of different feature scripts in development as well. With any luck, next year’s going to be pretty crazy for us.