Filmed in atmospheric black & white along a fixed camera plane, Rubin Stein’s single shot short TIN&TINA sees a pair of downright creepy twins enact a macabre plan to ‘fix’ their strict father. Stein joins us today to discuss the balance of light and dark and how doing away with the cut freed him up to explore the potential of narrative and meaning.

TIN&TINA is the first part of your LIGHT&DARKNESS trilogy of shorts, how does this story tie in with the forthcoming films?

Well, it was not my initial idea to make a trilogy of shorts, it just came up. When I finished TIN&TINA I began to think about my next short film. I had several projects on my desk and after several months lost in a sea of doubts, I suddenly found some interesting thematic and stylistic connections between three of them. I saw the triangle crystal clear: it had to be a trilogy. So, three different stories that you will be able to enjoy separately or together as a a medium-length film.

Pedro Almodovar says that “an auteur is always telling the same story again and again and again” and I totally agree with him. But it takes you plenty of time to realize what your main concerns are. Finally, the trilogy LIGHT&DARKNESS will be made of three black and white suspense short films exploring the dark side of human beings. As human beings we’re capable of the best but we usually choose the dark side. We are good and evil at the same time and at the end, life is always a fight between light and darkness.

Tin and Tina are creepy as hell, mainly because of the matter of fact way they go about their task – not to mention the Children of the Damned reminiscent costume design. Where did you find Ana Blanco and Sasha Di Benedetto and how did you direct their unnerving performances?

From the early versions of the script, I knew that casting these kids would be the greatest challenge of this film. Because of that, I spent a lot of time looking for them. I watched more than five hundred casting videos until I found Sasha and Ana. Both of their performances at the casting were not the best ones, they were (obviously) too nervous… but I felt they had something unique, very special and natural at the same time. For me, it was all about following an instinct. It’s always risky but now I’m really happy with the hard decision I made. Their performances in the movie are absolutely stunning.

After picking Ana and Sasha we spent like three months rehearsing at my home. Because it was going to be a one-take shot I placed all my furnitures in the same positions as in the movie and I recorded all the rehearsals with my smartphone so that they could get used to the camera position all the time. After we finished a rehearsal I showed them the videos and made some corrections. I wanted them not to see this process as a job, but as a game. We were playing and laughing all the time. You know, it’s really hard for a seven-year-old child to keep focussed on acting with no mistakes for ten minutes with no cuts… but I must say that on the set they behaved like great professionals. The whole crew were amazed by this couple of little big actors. Alfred Hitchcock said that it’s a nightmare working with children and animals. For me, working with children is very easy as long as you have enough sandwiches and candies.

I wanted them not to see this process as a job, but as a game. We were playing and laughing all the time.

Talking about performances, I would also like to stress Manolo Cuervo’s amazing acting as the father. I truly believe he was the perfect counterweight for this peculiar family triangle. Furthermore, Manolo also behaved as a professional father behind the scenes and helped Ana and Sasha to improve their performances. It’s amazing how fiction and reality mix together sometimes.

TIN&TINA has an arrestingly strong  visual style, further enhanced by the one-shot, single plane staging. Was this born out of the narrative or did the story develop around that setup? How did the technical challenges dictate your directorial approach and the production decisions you made with cinematographer Alejandro Espadero?

My previous work was a school short film made of more than thousand shots. I realized I had directed it like an AI robot, I mean, in a functional way but not using the narrative tools in the wisest way. So I decided to challenge myself: my next short film would be a one-take shot. My main task was exploring the potential and meaning of this technique and getting rid of any unnecessary virtuosity. At the same time I had this story of children’s curiosity about, let’s say, intangible things of life on my mind. I can’t remember when or how but both these worlds, story and narrative, suddenly fitted together perfectly.

From the beginning of the production process, Producers De la Torre brothers and I decided to build an unique set just to control everything related to the art and lighting departments. That was a hard decision, because the set was gonna be built in Auriga studios, which are placed in a region far from Madrid and Sevilla, cities where most of the crew was living. So, Cinematographer Alejandro Espadero, Art Director Rosario Aneas and I had lots of Skype meetings where we developed every visual detail of the project. We worked with some 3D previews so when we moved to the studios everything was very accurate: we knew every inch of the set with our eyes closed and a 16mm lens was attached to the camera directly. And what’s more, the children also knew the set perfectly because they had been rehearsing for three months in a very similar room. On the shooting day (yes, it was only one day) a crew member approached me and whispered: “Hey, this is a shoot and you look so relaxed… Aren’t you nervous?”… and I smiled. Needless to say I don’t think I will have such a relaxed shooting ever again.

A large part of the film’s disquieting feeling comes from what is heard rather than seen. How did you build the audio elements with Sound Designer José Tomé?

I give a lot of importance to sound design. In this story, everything happens in the same room in real time with no cuts. So, Sound Designer José Tomé and I talked a lot about how to make the audience feel they truly are in this room. I finally decided not to move the camera for almost the whole movie so that we could build a sound space where characters move from one area to another and the audience can perfectly locate their positions at all times. If you think about it, it’s a kind of a virtual reality experience because when you watch TIN&TINA in a theatre or at home with your headphones on you can feel that you are there, like a privileged viewer, like a peeping Tom. And, in fact, all the suspense is built around the voyeur’s figure because the audience want to know what’s going on behind the sofa, but they can’t, they’re attached to a fixed position. They’re forced to imagine the actions based on what they’re hearing.

Tomé took some classical movies as references but, at the same time, he created a space of sound wider than we’re used to nowadays, playing a lot with the out of field sounds. Steps, whispers and a storm approaching are sound elements that build a mysterious atmosphere which enhances emotions in the audience. The wonderful soundtrack composed by Juan Carlos Casimiro is also essential for making your skin crawl. In fact, you can watch the movie with your eyes closed and still know what’s going on all the time. 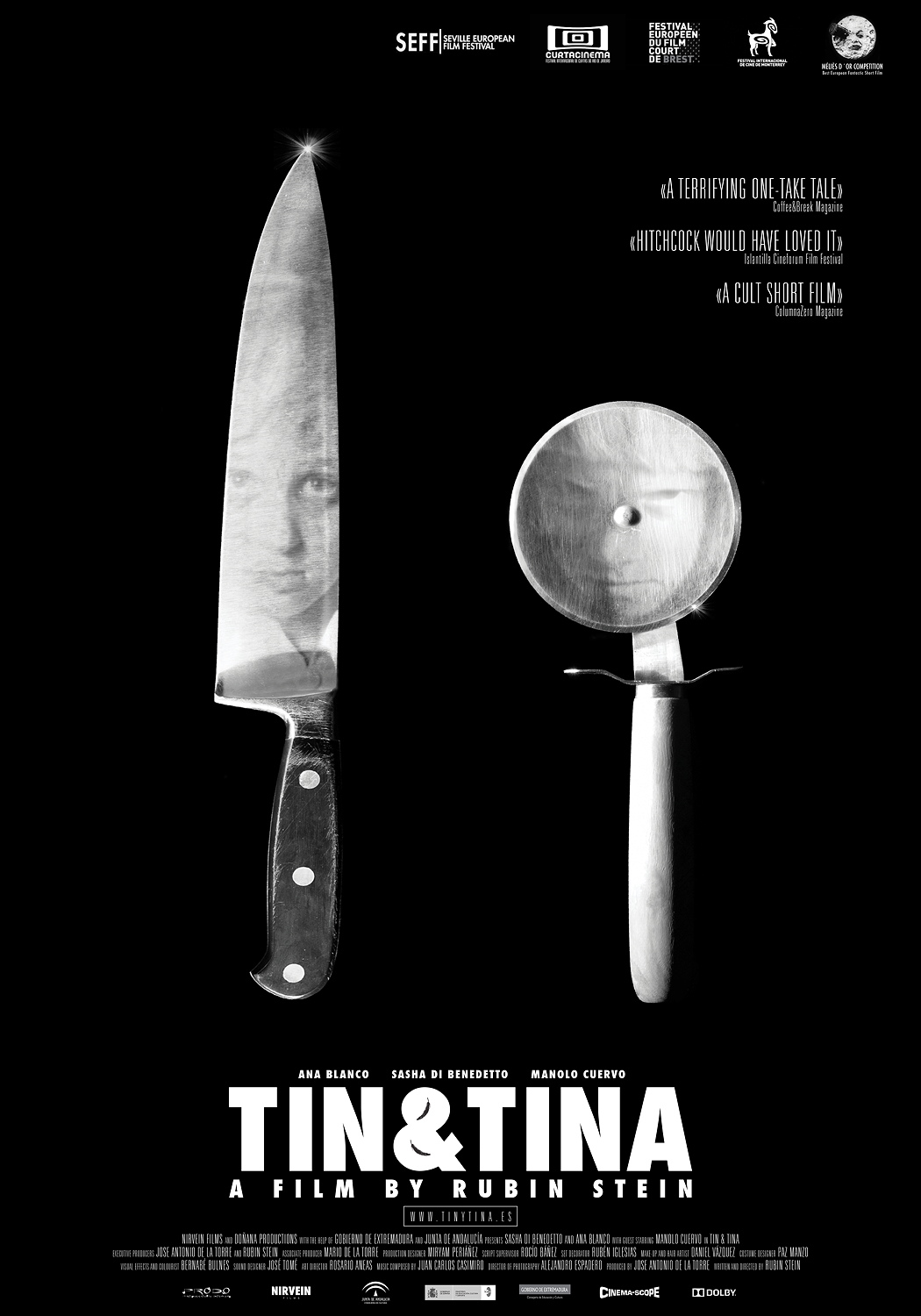 The film seems to have picked up somewhat of a ‘cult’ status during its festival run? Have you felt that TIN&TINA has been able to gain acceptance outside of the genre specific festivals?

That was one of my stupid concerns during the shoot. I was thinking “Oh, god, this is too creepy. Maybe, we’re crossing the red line and nobody will pick this movie for a non-genre film festival.” Fortunately, about thirty seconds later I realized it was not my problem. This was the film I wanted to make and this was the story I wanted to tell. Period. A filmmaker must think of his audience but must not be obsessed with satisfying them.

As TIN&TINA was being screened at film festivals, some critics defined it as a cult short film. I don’t know why. Cult movies usually are brilliant films involved in a case of ostracism. Maybe the critics found some interesting transgression or controversy on TIN&TINA and, because of that, they thought that it was gonna be refused by most of festivals on the circuit… but that wasn’t the case. In fact, it was screened at more than two hundred film festivals all around the globe and received more than thirty awards, including a nomination for the Golden Méliès to the Best European Fantastic Short Film..

What can we expect to see in your new short NERO?

NERO is the second short film of the LIGHT&DARKNESS trilogy. Again, it’s a black and white suspense short film but this time we’re attending to a greater mystery: the president of the nation has survived a terrible fire at his home. Most of his children are dead. A beautiful and wise journalist will be the first one to interview the president and what she will suspect is absolutely terrifying: What if the president burned his children alive just to win the presidential elections again?

What prompted you to reach out to the crowdfunding community this time?

As we didn’t get any grants from the government this time (you can guess why) we decided to reach out to the crowdfunding community to complete our budget. We’ve all our faith in this project and we know it’s gonna be a great movie so if anyone wants to help us, be part of the NERO family along its festival journey and get some exciting rewards just take a look at our crowdfunding campaign. Every little help counts.

Do you have any other projects we should be keeping an eye out for?

I’m involved in some feature film projects but, you know, they’re not short-term projects so we’ll have enough time to talk about them when they’re more developed. In Spain we’ve got a proverb that says: “Don’t sell the bear’s fur before hunting it.” But we always do… We’re human beings, aren’t we?