In a world which seems to be becoming increasingly erratic, if not at times just downright scary, it’s good to be reminded that despite the trouble and strife filling our feeds and TV screens there are innumerable unreported moments of serenity, hope and love which make life worth living to the full. These bright sparks of tranquillity amongst the chaos are gracefully celebrated in Johannes Schröder’s continuous shot music video for Maxim’s Pille aus Luft. DN asked Johannes to share details of the planning that went into this hopeful one-shot film.

Where did the idea for Pille aus Luft come from and how does the film’s symbolism play into the song lyrics?

The idea basically came from the lyrics and a conversation with Maxim, the artist. For everybody who’s not fluent in German: The song is about the feeling that we live in a time of uncertainty about our future. Suddenly we lost the feeling that this place gets safer and better with every decade. But the song doesn’t end there. It says: Whatever, I just take my moment, my place of hope and use it to act against all these obstacles and restraints. Even if it’s getting judged as naive – optimism and acts of hope and love are the only ways to cope with that shit. So the visual idea was to show something potentially hopeful in the midst of things which seem to divide people. This place of hope almost gets lost in between these obstacles, but we end with a concrete action, with a statement of hope: Our two main characters are not getting down in all the drama – they overcome it…and find love in a hopeless place. (Big thing for me: Using Rihanna lyrics to explain my strange ideas..)

Optimism and acts of hope and love are the only ways to cope with that shit.

How did you convey that concept during the pitch process?

In my treatment I described quite in detail which scenes would be part of the one shot and I made a mood cut, which always helps with visual ideas. After winning the pitch me and the DP Simon Vu did a spectacular Crapamatic – a thing I learned from a Dougal Wilson presentation. (Big hero!) It’s basically a previz with the premise: It doesn’t matter how bad it looks, just shoot the thing in prep to learn about timing, about beats, about blocking. So we stole 20 Playmobil figures of our EP’s son and tried to shoot the whole thing with my iPhone. This playmobilcrapamatic wasn’t quite the same thing as planned, but it made us more convinced that we wouldn’t end up with four minutes of boredom.

There’s an elegance to the staging of the various scenes, how did you develop the reveal of action?

As I said: The one shot idea which revealed more and more was the initial idea. During prep we thought: Let’s make some more camera movements, let’s add this and that, but in the end we came back to the most simple thing: Just pull back and focus on the couple. I remember, that we tried to come up with a shooting concept in case the whole ‘one-shot-thing’ turns out to be super boring. We didn’t find an alternative. So I said to the producer and the DP the night before shooting: “Either we are really happy at the end of tomorrow or we might need a lot of beers and have to hide in the countryside for two weeks.” I am super happy that we overcame the doubts we had and kept on doing the most simple, the purest thing.

I really found the hypnotic, dream-like feel of Pille aus Luft compelling, how was that achieved?

We shot 90% of the film at 100fps (just performance was sped up to 50fps) and used a constant pull back. This creates a feeling of getting sucked into a flow and it establishes a really slow rhythm. As well we used some optical filters to achieve a certain soft, but atmospheric look. On the other hand we used two different acting velocities. The couple is completely lost in their moment, almost standing still, whereas everything else is just going a little crazy (with much more movement and action). 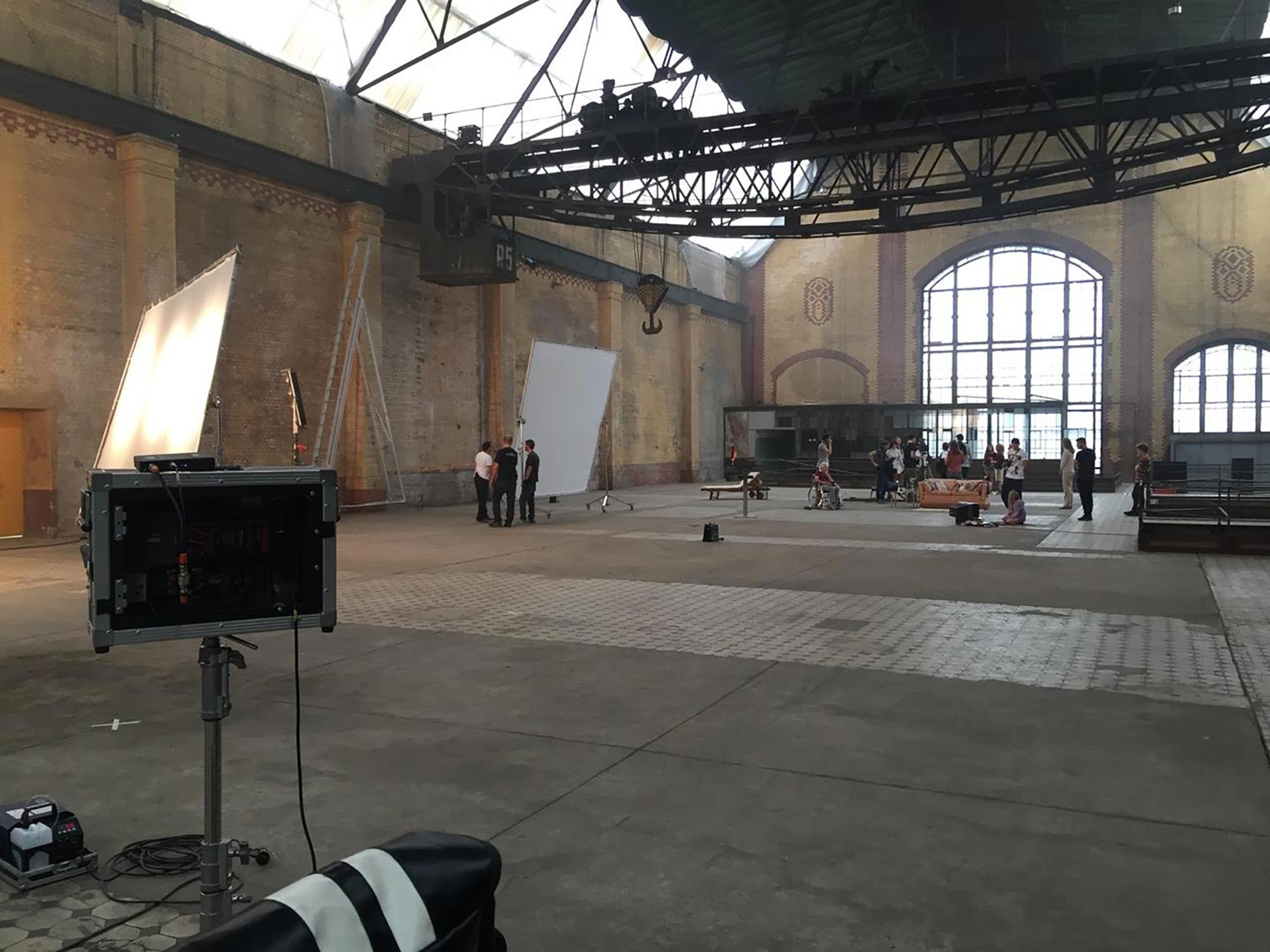 What were the characteristics you were looking for that led you to that remarkable location?

For us it was clear that we wanted a quite abstract location, but with a lot of patina and character in it. It was important that it wasn’t shiny, but used and full of its own story, almost like a shelter in the middle of mayhem. In terms of size it needed to be big to use the scale we were able to shoot with so many actors and scenes. We thought a lot about how to integrate the artist – a must have for the label. In the end is was pure luck, that our favorite location had this specators’ spot, where we could put Maxim on. And again the film god just saved our asses.

And again the film god just saved our asses.

How many attempts did it take to get the shot?

We rehearsed/shot over one day. So after 3 hours of rehearsals we shot 10 test takes to check timings with the track. Afterwards we got ready to shoot and did 8 takes. The biggest issue clearly was to direct 20 actors in their scenes while shooting the whole thing four times faster than normally. So timing the song parts on scenes, using little moments and glances was much harder than it would be normally. The least issue we had was the steadicam work. Our steadicam operator Axel Zschernitz did a great job here and just delivered take after take. Impressive!

What projects do you have in the works?

Right now I am shooting some commercial work and some other music promos. As I would love to shoot more stuff internationally I just built up my reel with less German dialogue stuff and try to shoot as many interesting projects as I can get my hands on. But my big thing for next winter is to direct my next short film. I love doing music videos and commercials, but doing a short film is still something special to me. Something where in terms of writing and directing I am just dependent on my own ideas and limitations. That’s exciting and frightening at the same time – so I want to throw myself into that madness again.