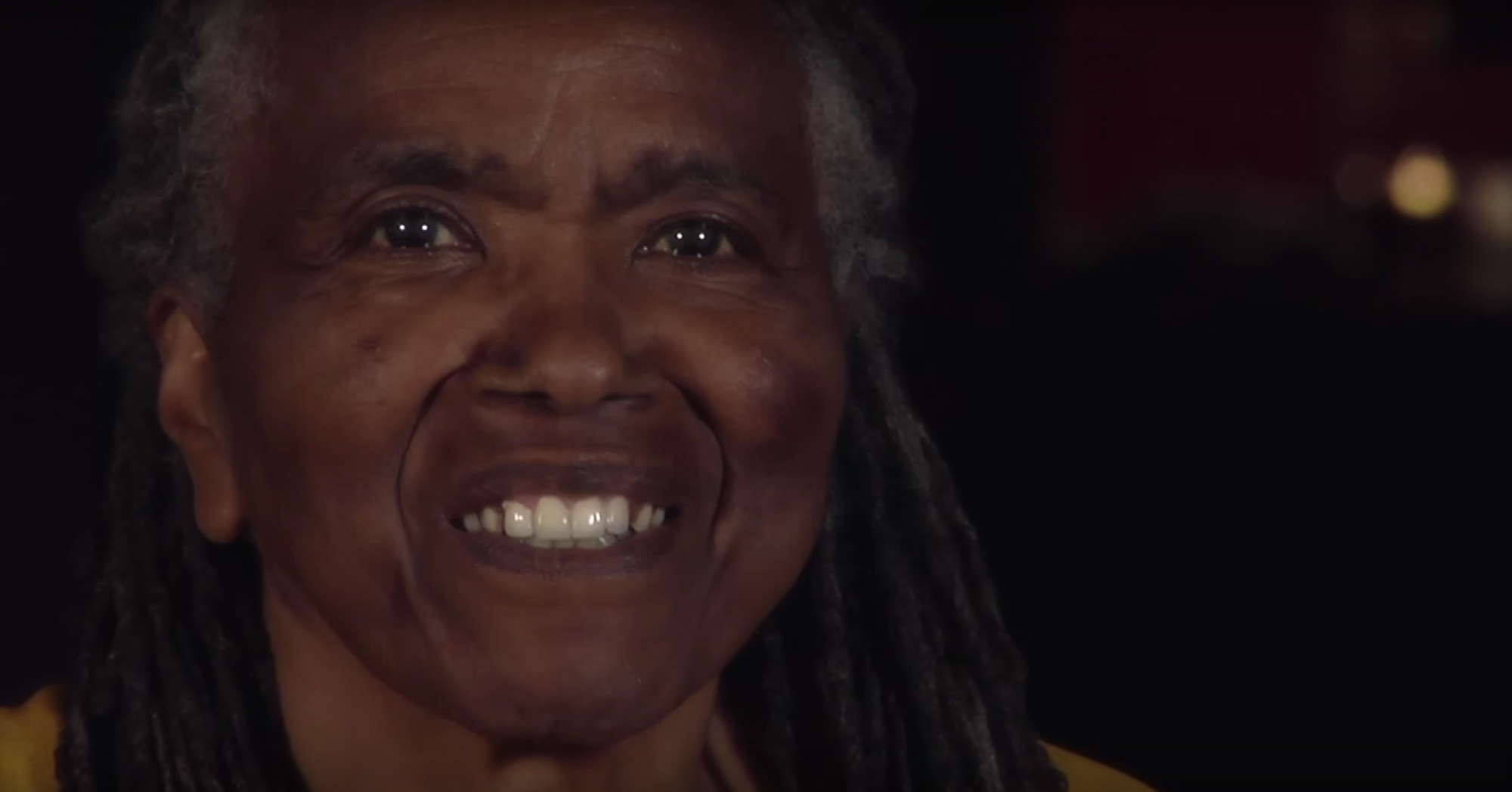 C.Fitz’s new documentary Jewel’s Catch One is a film so inspirational it will give you goosebumps and have you leaving the theatre in tears of admiration for the passion, perseverance and pure selflessness of it’s hero Jewel Thais Williams. For four decades Jewel was the owner of Catch One, a legendary LA nightclub and one of the first black discos in the United States. Jewel built Catch One into a support network and safe haven for the LGBT and black communities, her slogan being “no one turned away”. I was lucky enough to talk to multi-award winning Director C.Fitz during the London Film Festival about her professional and personal journey making a film about a magnificent human being.

Where did you get the inspiration to make the film?

I love doing work about unknown heroes that walk amongst us, and what an honour to tell Jewel’s story. When I met her in April 2010, I had volunteered to do a 2-3 minute piece for a charity I worked with, and she was being honoured for her community service. After researching her story (or rather multiple stories), I said to her on the first day we met “We need to do a documentary on your life”, she agreed and off we went!  It was a massive undertaking and took us 6 years to complete, including a year to do the post production. The inspiration comes from her work and all she accomplished and even failed to accomplish due to prevalent social injustices. It is an unwritten history that is so important to our country. I knew when I first met her it was a story I needed to tell others about.

How did you approach getting others to participate in the documentary?

After Jewel agreed to let me do her documentary, participation varied. At first there was resistance from some who weren’t in Jewel’s small inner circle. I don’t think people realised how serious I was about making a feature on Jewel.  The ‘asking’ became easier after spending some significant time with Jewel and documenting events in her community. By the Catch’s 40th Anniversary there were people coming up to our cameras wanting to tell their stories and thanking Jewel for all she did for them. It was a lesson in watching trust develop and learning how to be trusted as a filmmaker in a community. It also helped get us some amazing interviews from patrons who knew my camera and crew. With both my previous features there was a trust that needed to be built in the community to get the best stories.

Outside of patrons, the politicians and celebrities were important to interview to tell the true politics and celebrity influence the club had over the years. I did not get any nos in the last few years, only scheduling conflicts. The only person we did not get through to was Madonna who we feel strongly would have helped knowing how much she loved the Catch.

What was your process for capturing such open and honest conversations from the participants?

I prepare by researching my subjects as best I can before the interview. I do this in various ways outside of the normal Google search. If possible, I like to talk with someone that knows the subject before an interview and get to know their history so we can talk about how Jewel’s story might have touched them. Digging in and being hands-on with the research and Jewel’s community over the years made the later interviews easier to get to the heart of each subject’s story. My desire to let them tell their story, not just Jewel’s or the club’s – that was important to me. The film becomes more than a history lesson of four decades, but also an emotional and cultural community journey. By getting some of these stories on film we really learn how one person (in this case, Jewel) can touch so many lives and then inspire each viewer to do something a little more in their own lives.

The dark side of changing those racial and cultural barriers is the real heart of the film.

How did you go about obtaining the archive footage and what was how did you approach when it came to editing that footage?

We obtained some archival footage and pictures through Jewel’s private collection which we needed to go through one-by-one and organise. There were many boxes – even though a great deal of really old pictures had been lost in the fire. Archival footage of the charity balls was obtained through good friends and word of mouth which are all credited in the film. We struggled getting archival pictures and footage from local libraries and school collections as there just isn’t much documented. There either wasn’t any or the fees were too high, so we needed to put the word out and obtain them in other ways. Fortunately, there were some historians, loyal patrons and great friends that participated. A few close friends also were intrinsic in helping us sort and identify what we uncovered. Jewel also played a large role in collecting and identifying individual photos. For some archival materials Jewel is one of the few people who is still alive that could identify people, places and time. After collecting so many wonderful pieces of history the hard part was letting some go since we were limited to a traditional documentary length of 90 minutes. Our very first rough story cut was 6 hours long.

Jewel’s Catch One has moments of excitement that make you wish you were there to experience that time in history, but then it also has the ability to make you realise the importance and seriousness of the issues Jewel was tackling within the community, how did you strike a working balance between those two narrative threads?

This was the hardest task I think. This is a historical film on one of the biggest black-owned discos in the world! However, we would be remiss to not tell Jewel’s story, which explains history through the eyes of someone who lived it. We stand on her shoulders on all the social injustices and history she changed during the course of her 4 decades owning Catch. I am happy with the ride the film takes the viewer on, even if it’s not simply the fun disco film some thought they were coming to see. They will get a great journey through the music in the film. Many audiences have heralded our soundtrack as one of the best collections of disco out there…but the dark side of changing those racial and cultural barriers is the real heart of the film. The visual thread I used was beautifully shot dance footage that you see throughout, which symbolises both the excitement of being on the dance floor of the Catch, but also the amazing individual human beings and their unique stories that were born there.

Jewel is an incredible women, it’s impossible to learn about her life and not become reflective on your own approach to life and the way you treat others, what have you learnt from spending so much time with Jewel?

I have learned so much from Jewel, and each day I spend with her I learn something new. We were just in London and Milwaukee at some film festivals and aside from the easy answer that I learned to eat better (VEGAN ONLY for Jewel), I learnt about helping others selflessly, and also staying focused on my goals. Jewel is a healer, but also a businesswoman. Jewel’s story and the lessons she teaches apply to everyone. In these current times, we hope the film shows Jewel’s story as an example to help others become new voices against discrimination of any kind.

What are you hoping the audience will take away from the film?

We have been blessed to see audiences in the US and abroad leave the theatre inspired to do more with THEIR lives! What a great gift and always my wish to create. By telling jewel’s story in the shadow of tragedies like the PULSE nightclub shooting in Orlando, and other senseless shootings all over the world we have a model to learn from. Jewel is a voice that can help others stand-up, take action, help their neighbour and make tomorrow better for all of us.

What is the club like now that it has been taken over? Have they kept true to the original Catch One?

We are thrilled that the club was bought by owners that kept it a nightclub. It is now called UNION. In fact we know the owners and they, like the producers in the film, are very adamant on helping preserve the building as an historical landmark. Myself and our consulting producer, Tracy Mercer, just recently went to the LA Conservancy to offer our support to help move the building from the ‘watch-list’ to becoming an official landmark. Additionally, we hope the film can help support the movement of that corner of Pico and Norton being named after Jewel!

What’s project are you working on next?

Aside from continuing the work on the film by getting it distributed (so the largest audience can have access to its history and Jewel’s story), we are also developing it into a scripted film based on the documentary and all the stories and footage we collected over the years. My marketing and social media company, Dancing Pictures, will also be incorporating more unrecognised hero stories into marketing for brands. It’s important for brands to herald the people in their community they are targeting through their advertising. So combining the two is ideal and as I keep at the forefront of the marketing and advertising world, I can help drive those stories to a wider audience.