There’s an old film school adage that says if, in a film, a character wakes up at the end and everything prior was a dream than the story was for nothing. This point is challenged at the centre of Le Parc but it’s not what it’s about. The interest is clear and expectations are supposed to be subverted but Le Parc isn’t about plot, it’s a film about teenage romance, heartbreak and the subconscious. I caught up with Director/Producer Damien Manivel to talk about his relationship with dreams, improvisation and acrobatics.

Where did the concept for Le Parc come from?

Ideas always come from many places. I really wanted to make a film in a park, just one space, and on a very short scale, like 24 hours. So, the idea was, can I make a feature film in only one park? Because I think if you start to make that the concept then you have to find ideas within that frame, and I think the park is perfect because as the night goes on, as the day goes on, the colours change, the shapes change, and then the emotions follow that space.

I also wanted to work with teenagers and to talk about teenage romance. The idea was to start from the beginning with the first glance, the first touch and then to go all the way through like a real love story, like falling apart and even after their separation. I don’t write scripts but I setup concepts based in a place and in a structure, like how it will evolve. But I don’t know what will happen inside every shot, I really write the story on set, whilst we’re shooting. As far as the places are concerned it’s really concise. I know where it starts, I know every place in every park, but what happens when we shoot, I don’t know. This I decide in the morning or I decide during the shoot.

So, do you storyboard before you shoot?

Yes, I do a lot of drawings.

I read that the film is shot not just in one park but over two, is that correct?

You mentioned about wanting to make a film about teenage romance and the relationship between Maxime and Naomie’s characters feels very authentic and natural. How did you go about getting those performances from such young actors?

They’re not actors. I met them in the street maybe two weeks before we were shooting. They only met once before the shooting and we wanted to protect those feelings. When they meet again it’s directly on the set. We wanted it to be natural because they discover each other when we do the shooting. This was really important because I don’t do rehearsals before every shot, we go directly into the shooting so we can have this moment of a strange look at each other and capture the clumsiness.

The aesthetic of Le Parc is reminiscent of numerous filmmakers, in features and reviews I’ve seen many of the New Wave directors cited as well as Apichatpong Weerasethakul. Were any of these directors influential and, if not, who inspired your aesthetic?

As for Apichatpong Weerasethaskul, the influence is because he has made films in two parts. Day and night for example, in Tropical Malady, the second half is in the jungle. But, I try to make it my own way, with my own style and I love his films. But as for my other influences, I would say Tsai Ming-liang, Robert Bresson and mostly Asian Cinema.

The tone of the film changes about halfway through, subverting any sense of the ‘traditional three act structure’ was this intentional and, if so, why?

I really wanted to make it separate when the night is coming, when the sun is falling down. The main change is at the middle of the film and the sun is going down. After that, I didn’t know that the two parts would be so different and in the treatment I didn’t think the second part would be a bit fantastic or a bit weird, this is something I really discovered whilst shooting and I have to accept it because if I don’t accept it, I don’t make the film.

They’re not actors. I met them in the street maybe two weeks before we were shooting. They only met once before the shooting and we wanted to protect those feelings.

The problem when you make a film in two parts is that sometimes audiences feel that they have to prefer maybe the first part or the second part and I’m not so sure of that because, when I watch a film, I don’t want to choose one part over the other, I just want to see the film as a whole. It’s not a problem, I accept it but I just discovered that making a film in two parts is not so easy.

Could you talk a bit about the look of the film? The decision to choose a 4:3 aspect ratio with a static camera makes the film almost feel a like moving photographs at points? What camera did you shoot on?

It’s my camera, a Nikon D800E. It’s a really small camera and I shot my first feature film, A Young Poet, with it. I used it because it’s my camera and it doesn’t cost me money to shoot the film with it. And I’m the producer of the film so I can make that decision. Fixed shot, because I really like fixed shot and I’m trying to make fixed shots which are alive, which aren’t static and using the sound I can make something deeper into the fixed shot. The ratio was decided when I met Naomie, and I shot her face, I thought we had to make it 4:3 because of her face. 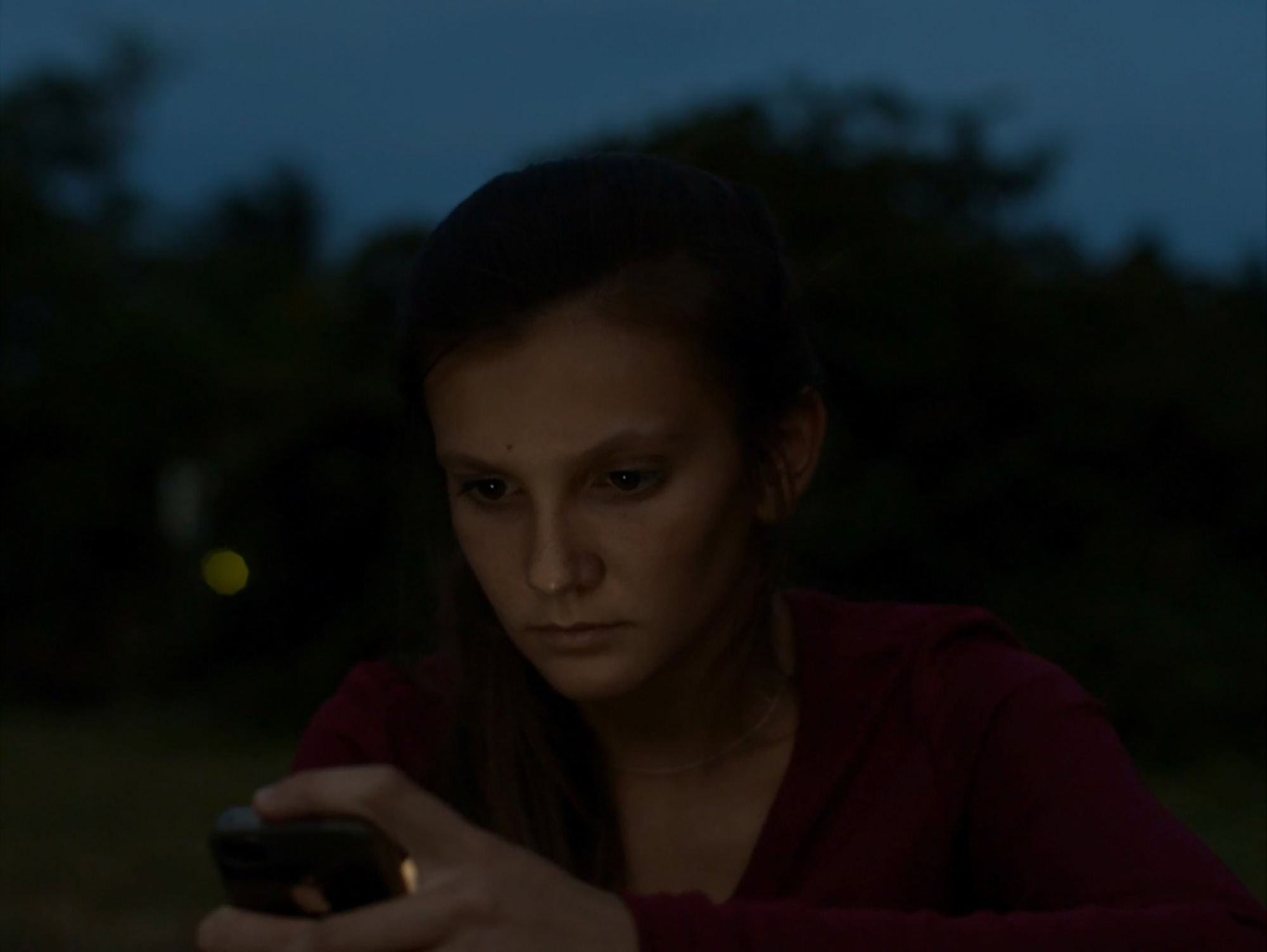 Characters have to be very powerful, when we are far, with their gestures and their bodies but also when they are close and 4:3 can do that. Also, we could’ve filmed the park very wide but I wanted it to feel like a drawing, very, very simple. The shapes, the trees, very simple like a child’s drawing.

I read somewhere that you were a dancer and acrobat before becoming a filmmaker, is that true?

Yeah, when I was a teenager I was doing a lot of acrobatics. Then I worked as an acrobat, then a dancer for a few years.

Have those professions influenced your filmmaking in any way? Maybe the way you work with actors or the way the camera moves?

Yeah totally, it definitely has influenced me but I don’t know how it influences. I love watching people dance and I have this passion for the simple action of watching people moving. When I started to make films I felt this need to see people moving, of course, they are not dancing but, for me, walking, for example, or simply sleeping can be really beautiful like a dance. I don’t do choreography on the shooting, they are free to move as they want. But I really try to say to myself that even the most simple gesture is meaningful and beautiful.

The second half of Le Parc takes place in a dream, a common place in cinema for characters to have their fears realised or to experience their subconscious impulses in a different reality, what is your relationship to dreams, and why did you want to tell a large portion of this story in a dream?

To be totally honest, when I was shooting the second half I didn’t know it was going to be a dream. I thought it was real, I thought she was going backwards because she was shocked and crazy, like a teenager. But then I started shooting and when I saw the images with my team I thought, “It’s a dream”. So, let’s accept it and go further into that style and then let’s go more into that dream. For example, the ending of the film she wakes up and I questioned that choice because it may be seen as too easy but I like that it’s simple. Cinema can do that with dreams, making it simple.

The ratio was decided when I met Naomie, and I shot her face, I thought we had to make it 4:3 because of her face.

I know some people have found the ending disappointing because the character is waking up and it was all a dream but, for me, it’s quite simple and strong because, okay she wakes up, but all that stuff she’s been dreaming, she’s been feeling inside her and she has to deal with; both the day and the night. So, I decided that whilst it may be a cliché, but it felt right.

I’d agree, it’s a Hollywood trope for characters to wake up at the end and it all be a dream and then it mean nothing whereas, actually, I think it can mean so much more because in a dream you have less control and you are experiencing it as much as a reality as the day time. I’m curious to know about the font you used for the title and for the on screen text messages. It’s really intriguing, with a faint neon glow, what was the decision behind that choice?

It was a difficult choice because everything has been, you know, a bubble, the iPhone style, filming the phone, those are the ways to do it. I was trying to find a very simple and elegant way to make it happen. The editor came up with the idea to just have it be one line appearing on the right and then on the left, for the boy and for the girl. It took a long time to write the text.

To wrap up, have you got any new projects coming up?

Yes, I’ve just finished shooting one now. I’m editing for a new feature film. It’s a film happening in Japan. There are two directors, one Japanese and the other one is me. I produced the film, it’s a story of a little boy, who’s 7 years old in Japan.

Great, and when are you hoping to have it out?

Hopefully, it’ll be edited by May to June so we’ll be releasing it after that.

Le Parc is available to watch exclusively on MUBI.